A different type of self-consciousness altogether

Emily D’Angelo, in a moment of subversion, sang the entire program wearing casual trousers, a vest, and chunky combat boots, her cropped hair slightly mussed, and wearing only light make-up. 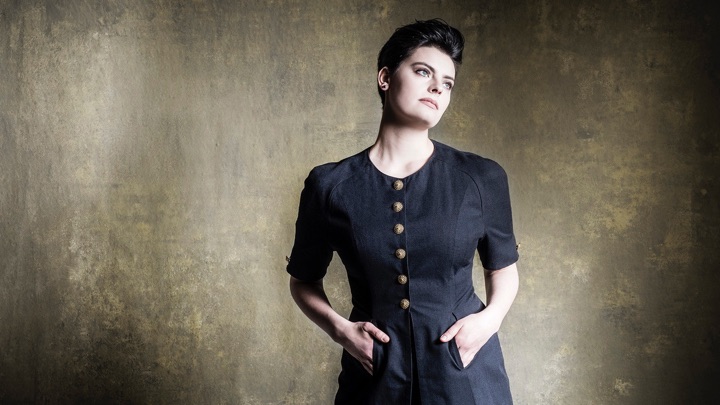 In the beautifully appointed Board of Officers room at the Park Avenue Armory, there hangs three imposing paintings of generals, who gaze down and out through the chandeliers, made of swords and glass globes, which look like landmines snapshotted mid-explosion.

It’s a profoundly masculine space, in which the power and violence are made beautiful, the stunning Gilded-Age interiors projecting both grandeur and a very Victorian hint of claustrophobia; even large spaces like this feels intimate and warm, never mind the weapons on all the walls.

It was in this setting, under the generals, in which mezzo-soprano Emily D’Angelo and pianist Sophia Muñoz presented a thoughtful and subtly feminist program Sunday afternoon. D’Angelo, in another moment of subversion, sang the entire program wearing casual trousers, a vest, and chunky combat boots, her cropped hair slightly mussed, and wearing only light make-up. The surprising intimacy of this choice, as well as its subtle critique of the space that women in opera inhabit and the ways they push against that space, became emblematic of the program as a whole.

The first half of the program was the newer and more unexpected, with an arrangement of Hildegard of Bingen’s O frodens virga giving way to two early Schoenberg lieder (late Romanticism, right before it went off the rails) followed by a collection of very recent works by Missy Mazzoli, Cecilia Livingston, Sarah Kirkland-Snider, and, in a turn to pop, Randy Newman.

Hildegard always makes me quite emotional; perhaps it’s her tenderness towards women’s voices, the melismas that speak various kinds of devotion, or perhaps this comes from some sense of accessing, even briefly, a continuum of women artists, one in which singing has always been something we do, something ascribed to us particularly, for better and for worse.

D’Angelo sang it, refreshingly, like an opera singer, without any false attempt to add in a “medieval sounding” straight tone; instead, this moment felt like a bringing in of Hildegard into the concert repertoire, affording her the same interpretive vocal palette as a singer would bring to Romantic lieder. 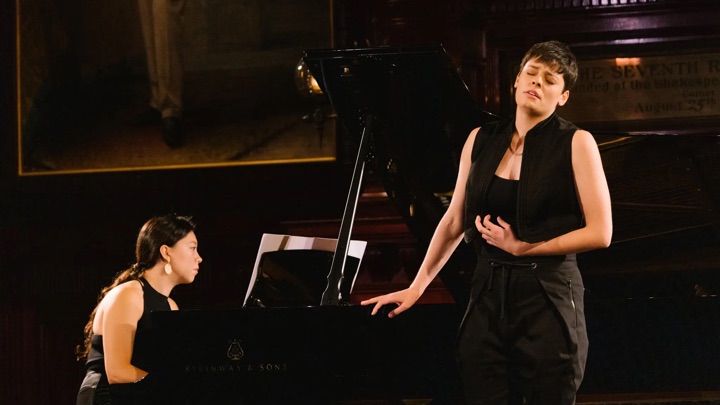 Without being dogmatic, this program prioritized works by women, either as composers or librettists. When works by men appeared, the texts were often by women poets. But they were linked by more than just a sort of pan-feminine aesthetic.

Throughout, there was an intensity of feeling, an interest in exploring the subtleties of various emotional states—longing, waiting, grieving, wondering—that reflects the particular affordances of recital format, which prizes intimacy and the text above all, and reflects the types of questions that are so often asked of and by women. What is our longing, what is our desire in this world that has not been built for us? How do women feel and love and mourn and create and interpret?

D’Angelo, at every moment yesterday, showed her range as an artist and interpreter; her voice was in turns searingly sensitive and overwhelming powerful, and she moved between genre and time period with ease.  Particularly beautiful was a short work, Penelope, by Livingston, which took the voice of Penelope, waiting for Odysseus to return.

Here, the mezzo displayed the subtleties of her acting ability, her eyes alight with fearful hope and her body slightly tensed, the posture of someone always listening for the slam of the door, or the click of heels on the floorboards. In Newman’s “Wandering Boy,” her voice shifted seamlessly into a pop sound, layered over the hymn-like accompaniment, bringing the themes of longing and estrangement that wove throughout the first half to a tender conclusion.

I was reminded watching her how powerful the recital format can be, both musically and as an act of literary criticism. How composers set texts, how the singer sings them, and most importantly, how these texts are arranged over a program, is the source of the surprise and drama; as an art form, I feel it’s underrated—this is an act of artist curation that can bring powerful new perspectives to familiar and unfamiliar works alike, and which displays the intelligence and artistic values of a singer.

I don’t know Ms. D’Angelo, but looking at this program, I feel I can see what interests her as an artist—what emotions, what texts, what types of connections she prioritizes.

The second half, which made me less weepy than the first (thank god, as I had nearly no mascara remaining), brought us back to slightly more familiar ground with selections by Aaron Copland, Rebecca Clarke, Florence Price, Fanny Mendelssohn and Clara Schumann. It also brought out even more shading from Muñoz at the piano, allowing her to flex her own considerable dramatic muscles, while swelling to provide an undulating mesh upon which D’Angelo’s sound could rest.

D’Angelo’s interspersal of Rebecca Clarke’s Yeats settings with selections Copland’s Emily Dickinson songs, were well-pitched not only musically, though each composer’s style fit beautifully with each other, but brought Yeats and Dickinson into thrilling literary conversation; the arch longing in “Why do they shut me out of heaven,” which asks its part-gleeful and part-abject question “Did I sing too loud?” is transformed beautifully into the mysterious and plaintive longing of “The Cloths of Heaven,” which ends with these lines, among my favorites in English literature: “I have spread my dreams under your feet/ tread softly because you tread on my dreams.”

Dickinson’s alternating clarity and elision, around whose edges pain dances, was complemented by the folksy rue of “Down by the Salley Gardens,” which enacts its own deflection before its tearful conclusion.

The last two songs, which paired Clarke’s gorgeous setting of John Masefield’s “The Seal Man” with C. Schumann’s “Lorelai” was especially ingenious. Here we have two female composers setting men’s texts, texts which deal with women’s desires and their consequences. In the Masefield, a woman’s overwhelming desire for a mysterious lover ends with her drowned in the sea.

In the Heinrich Heine poem “Lorelei,” a sailor is lured by the siren-like Lorelei to his own watery grave. This pairing of deadly love, in which women are both the tempted and the temptresses, returned to themes that had been present throughout the program: women and desire.

But further than this, placing these two together brought out the self-consciousness in each. Heine’s poem begins with an obsessive thought (“Ich wieß nicht, was soll es bedeuten/Daß ich so traurig bin/Ein Märchen aus alten Zeiten/Das kommt mir nicht aus dem Sinn”), a self-conscious moment from the narrator. “The Seal Man” both these themes of obsession and of self-consciousness, the narrator engaging in an act of interpretation himself: “She was drowned, of course. It’s like he never thought that she wouldn’t bear the sea like himself.”

It was a strange ending, but I think a perfect one. D’Angelo was at her most vocally dramatic in each, giving alternating shades fear and desire, but it showed the ways in she was also aware of herself as an interpreter, as narrator—a different type of self-consciousness altogether, one of an artist in total intellectual and dramatic command.