Teatro Nuovo took a big risk in a bad way on Wednesday with its revival of Rossini’s Maometto II. 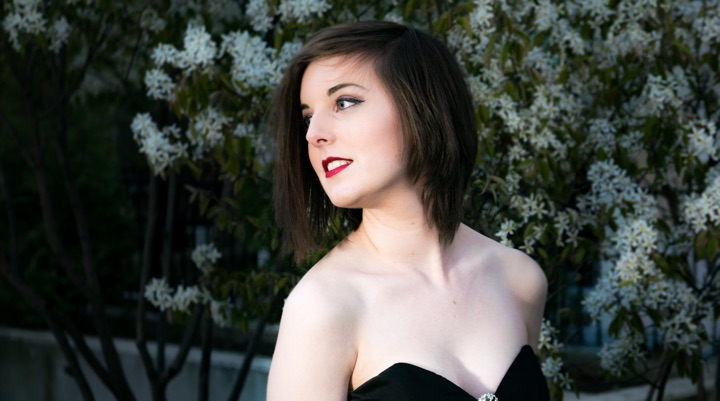 Simone Mcintosh, whose “sparkling and flexible coloratura mezzo-soprano made our heroine Anna anywhere close to sympathetic”

Premiered in 1820 to a cold reception in Naples and revised significantly over the following years for premieres in Venice and Paris, Maometto II is based loosely on Italian history. There was a real Ottoman conqueror called Mehmed II, and he did beat out the Venetians in their Greek holdings of Negroponte and Lemnos, reclaim much of modern-day Albania and Croatia from Italian rule, and eventually got so close to Venice itself that the Republic of Venice agreed to the Treaty of Constantinople, which ceded territory and paid off the Ottoman Empire.

In Rossini’s opera version, however, this international conflict becomes personal; Anna is the governor of Negroponte’s daughter, and she unknowingly falls in love with Maometto himself, right before he conquers the city. The personal then becomes nationalistic—Anna is forced to choose between her love, already undermined by lies and treachery on Maometto’s part and her father, and thus her fatherland. She chooses dad and country, but dies anyway.

There are many things to admire about Teatro Nuovo—their commitment to period instruments to historical performance research, their generally strong musicianship, and their support of early-career artists first amongst them. One thing that became clear to me on Wednesday, however, is how their house style can undermine them dramatically. Maometto II was presented, like the other works I’ve seen—concert style, without costumes, blocking, or much dramatic commentary, and for me, their format worked against them in two major ways—vocally and politically.

Within the limits imposed by a concert format, the singing must be perfect—there is no room for error at all, because with nothing to look at the voices must be compelling all by themselves. This is a mighty task to lay at the feet of your singers, especially for these artists who are still in the early parts of their careers, and while there was indeed some very fine singing on Wednesday, there also were plenty of cracks and bumps in the road.

The highlight of the evening was Simone Mcintosh, whose sparkling and flexible coloratura mezzo-soprano made our heroine Anna anywhere close to sympathetic, and she displayed admirable stamina and sensitivity. Mcintosh’s marvelous act one aria with harp, “Giusto cielo” had a tragic sweetness to it, the voice taking on the warmth of tears running down one’s face, a quality which reached its apotheosis in Anna’s final aria, which was mesmerizing in Mcintosh’s capable hands.

Scott Purcell, as Maometto, was also quite successful—his sonorous, flinty baritone sound and upright posture lent Maometto strength, in spite of Purcell’s compact stature, while also allowing for real tenderness to emerge in this conqueror’s early scenes with Anna. 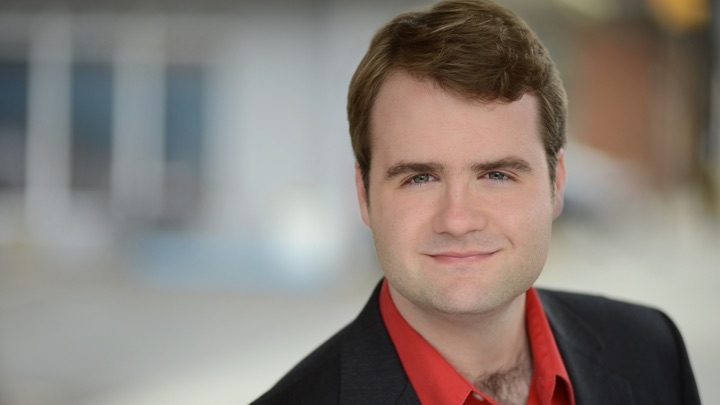 Nicholas Simpson, as the deeply frustrating father Erisso, had a considerable dramatic and vocal task to execute, to mixed results. At his best, he displayed a sterling tenor sound, nicely hooked in and gleaming with brightness which promised much for the singer’s future. But there were also many moments of unwieldy sound, sometimes veering out of tune or cracking on high notes.

As Calbo, the love-struck general who often is the only person to stick up for Anna’s virtue and loyalty, Hannah Ludwig was clearly a fan favorite. For me, there is still a lot of work to be done, however, before this voice truly captures me. Her registers are not yet reconciled to one another, and she has an unpleasant habit of scraping out her chest voice with audible effort. What Ludwig, has, however, is a fiery intensity and presence that makes her very watchable. As her sound continues to settle, I imagine she’ll have a formidable voice on her hands.

With the musical direction of Jakob Lehmann at the podium as the primo violin and capo d’Orchestra, and Lucy Tucker Yates as the maestro al cembalo, the performance often thrummed with intensity, even though Lehmann’s tempi occasionally drifted into sluggishness. The most fun part of it all, however, was the on-stage band to accompany the Ottoman forces. They were delightful, from both a historical and musical viewpoint, and quickly became my favorite characters. This is what Teatro Nuovo does well, reviving performance traditions that have faded over the course of the nineteenth century.

All of singers were hurt, however, by a lack of strong characterization or clear stage direction—another result of Teatro Nuovo’s house style—which often boxed the singers in at the very front of the stage or had them wandering aimlessly, looking around at their surroundings as if they’d never been in their own rooms or to the piazza. There was no director at all listed in the program, so likely this was the singers’ own blocking. This has been a problem at past Teatro Nuovo performances, and it undermines the considerable vocal and musical work of their artists.

Finally, however, the lack of staging brought to the fore the problems with the opera itself—how uneasily it sits in a modern context. While the score has passages of nearly sublime beauty, the story is stretched very thin atop it. To modern eyes, this story is so profound in its orientalist jingoism and its extraordinarily pervasive misogyny that it was hard to endure, especially without either distraction or commentary via staging.

The opera links the sexual fidelity to the father with sexual fidelity to the Fatherland, reveling in deeply racist and violently misogynist fears about miscegenation between non-white men and white women, framing that miscegenation as treason to the nation, and insisting that for those white women, death is a preferable alternative to that treason. 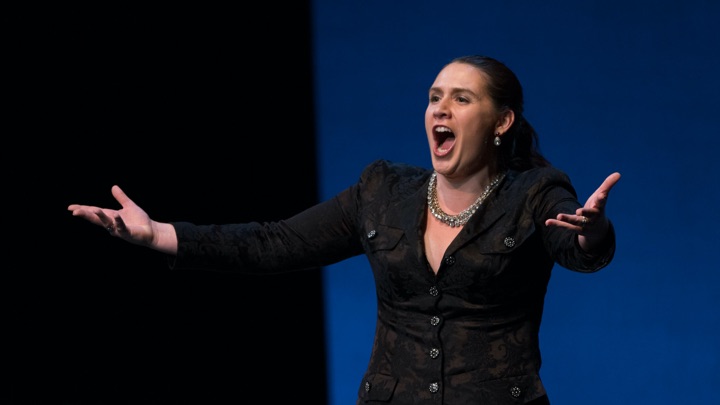 Anna gives herself away to her father’s general Calbo as a reward, insisting that even though she doesn’t love him, she would rather be married to a good son of Venice. After this, there is nothing for her left to do but die, and die she does, by her own hand in a shocked Maometto’s arms.

Living as we all do right now, after the overturning of Roe v. Wade, in an era of increasing and increasingly visible acts of legal and physical violence towards anyone non-white and non-male and non-cis, this opera becomes not just uncomfortable, but actually sickening in its politics.

The logics of white supremacism, capitalism, and of misogyny constantly look to conscript white women’s bodies as tools of upholding and replicating white supremacy: we are seeing the effects of this right now. And many white women go along with it; sometimes without knowing, and sometimes consciously acting as tools of the patriarchy, perhaps thinking that if they are complicit, they’ll be spared.

White supremacy also seeks to reward white men with white women’s sexual and emotional availability. At the same time, it glorifies the virgin sacrifice of that same white woman in service of the country, in the most fucked-up Liebestod of all—dying for the Father(land). This is not subtext in Maometto II: this is the text itself.

It’s not Teatro Nuovo’s fault that sometimes wonderful music comes wrapped a nasty plot—if we were looking for operas that are incontrovertibly feminist, we’d lose most of our canon. But the fact that the company presented this with so little commentary makes me question the company’s ethics.

There was not a single word about any of these issues in the program—even to question the work’s Orientalism, which generally is easier to pinpoint on the surface, let alone its misogynist and fascist resonances. And make no mistake—this is exactly the logic that fascists use to absorb the emotional and sexual into the patriarchal white supremacy. This is the logic that is threatening to take over our country.

Why bring back underperformed works? Surely it cannot be enough to say “Because it’s Rossini,” or “Because the music innovative and beautiful.” What a disservice this does to Rossini and to opera itself, by denying that operas are and have always been political, have always said something about the world and the real people who live in it.

I love the canonical works because they are beautiful and innovative, but also because I think they still have so much to say, even when they’re problematic. I get angry when companies and directors deny their modern complexity in favor of a vague gesture to history—as if history was apolitical or uncomplicated.

But without staging, direction, or any real point of view, I’m left wondering what exactly Teatro Nuovo was attempting to say with this revival. Did they not see these issues? Did they think the work itself would transcend? Or did they see it, and erroneously assume that, because we live in a different time, audiences can immediately and easily separate the musical wheat from the political chaff? I simply do not know.

If Teatro Nuovo would like to continue doing these works, it might be time for them rethink their style. The concert format is not helping them: A smart, thoughtful director might have been able to make something of this, frame it in a way that helped audiences see the tensions of its threadbare, hyper-nationalist plot or maybe even turn it on its head.

A clever dramaturg might have written a program note that put all of these issues into historical and modern context, and insisted on the necessity for revisiting history through this lens. And if they couldn’t find anyone to do these things, perhaps that was a sign not to do this opera in the first place.

I say this not because I am a feminist killjoy (though I imagine some readers may think of me this way after this piece), but because I think any ethical relationship with opera needs to think much further and quicker than academic curiosity, or musical innovation, or even beauty itself. Not doing so only undermines the power of form that so many of us have devoted our minds and voices to keep alive.