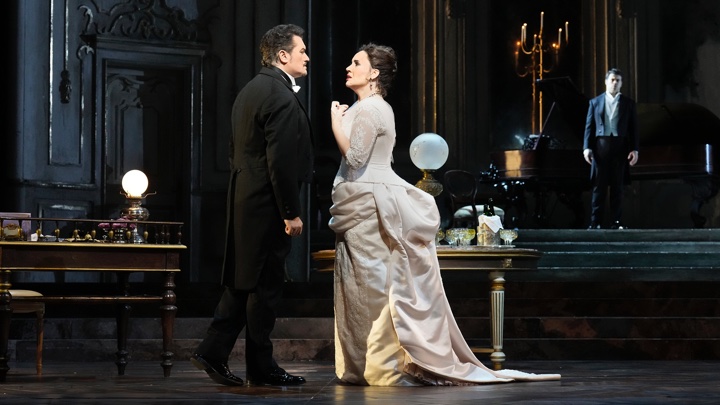 Fedora, the latest installation in this informal series and a case unique unto itself, succeeds as both entertainment and as a conversation starter about our own snobberies.

With the exception of Tosca, no other opera’s critical fortune has suffered so much from our inability to deal frankly with the works of the Italian late 19th/early 20th century than Umberto Giordano’s Fedora.

It’s not just because Fedora’s hallmarks—its concision, its huge demands on its prima donna, its suffocatingly airtight plot—aren’t readily apparent to a first-time listener, nor that Umberto Giordano isn’t an unusually explicit emotional communicator. If the phrase “well-made play” seems to us like an oxymoron, then the operas that sprung from the genre, now virtually discounted as too operatic for opera and mummified in memories, are downright paradoxes.

When we perform them, the collision of score and lore yields an absurdly small margin for what the opera queen might consider success. Critics, especially eager to flex on this opera, are seldom generous. 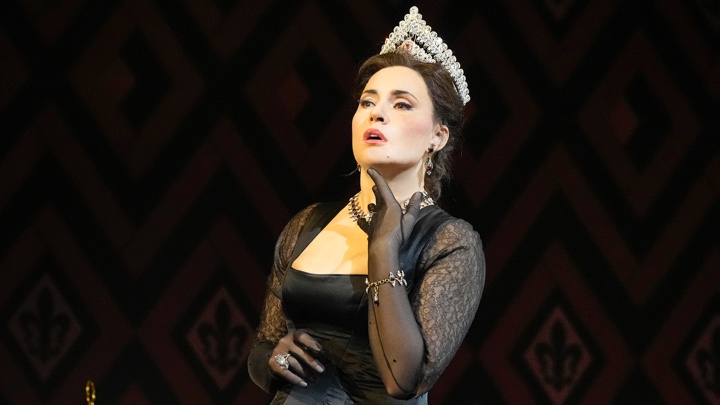 With Fedora in particular, we labor beneath the canard that the title role is one reserved for the crepuscular diva and the century-long shadow that Sarah Bernhardt cast as the first Fedora in 1881.

In a piece tailor-made to both her interpretative capabilities and her physical image, Sardou gave Bernhardt (who was Jewish and famously dabbled in androgyny) a role in which her physical image gave the imperious Russian princess a provocative exoticism (“If the princess is a Greek by her mother, she is a thorough slave by her father,” reads a line from the Sardou play.)

As well, her celebrity suggests more than a hint of gender-bending grit as she embarks on her vigilante justice campaign (“You do not know me, doctor; I have courage, all sorts of courage, I assure you!” she snaps, trying to access her mortally wounded fiancé in the first act). In short, it’s not a girly or girlish role—the character’s mystique emanated from qualities within Bernhardt herself.

Giordano (and librettist Arturo Colautti, whose work is better here than in Adriana Lecouvreur) had a difficult knot to untangle in adapting the play into music, and they sought to replicate the combination of Sardou’s text with Bernhardt’s particularities by concentrating Fedora’s mostly parlando music in the center of a spinto tessitura with frequent but brief jumps up and downwards and requiring continuous, high-drama acting to demarcate difference.

It was decided that the least feminine (or even remotely familiar) thing one can be is a woman of a certain age (she seduces Loris by saying “Un’ altra dolce madre in questo sen tu avrai”) and Fedora as an inadvertent retirement vehicle was born. 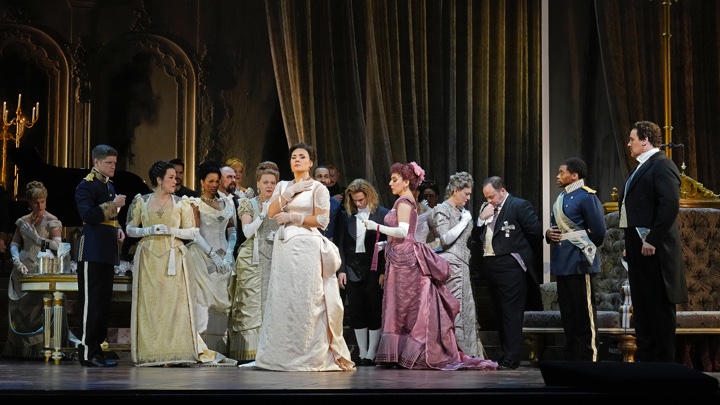 Yet still it enthralls, as evidenced by the warm applause throughout Saturday evening’s New Year’s Eve gala premiere, and not with a crepuscular diva at its center, but a glamorous  40-ish Sonya Yoncheva.

Yoncheva, in her second outing following a production in Milan last year, brings a consummate voluptuousness (if an overly exaggerated fragility—this Fedora is a swooner) to a role in which she seems wholly comfortable, and the results are, on the whole, quite satisfying.

She’s a subtle actress who bears herself regally, and the shimmering, moonbeam quality of her middle register is often spun out with real delicacy, especially in her dynamically exacting entrance aria and Act III prayer. However, the voice now seems to resonate in distinctly different ways throughout her range and chest notes, eagerly bitten into from her first entrance, can shade pale while high notes papery.

If the appearance of spontaneity is key to achieving the strongest effect in this music, Yoncheva’s more self-conscious competence proves an effective, though slightly less fulfilling, path. Pivoting readily from note to note with her quavery instrument following suit, she navigates the role with a carpenter’s facility rather than a sculptor’s authority. 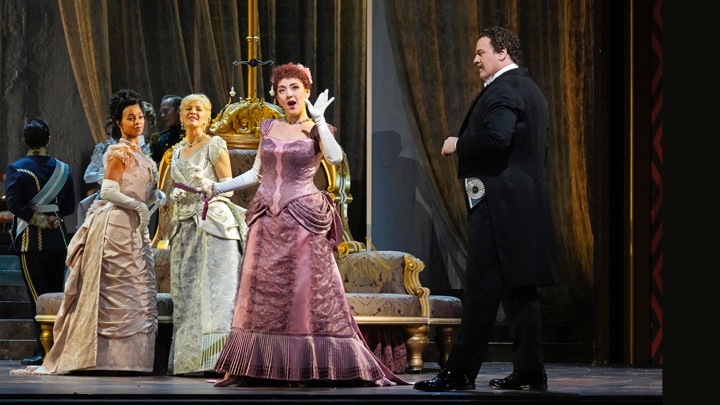 The arrival of Loris, Piotr Beczala, kicked the evening into high gear. After the assassination of her fiancé Vladimir by, Fedora assumes, Loris and the politically motivated Nihilist movement, she takes it upon herself to extract a confession from him (through seduction, naturally) and see to his punishment. Beczala, singing the opera’s one excerpted aria, “Amor ti vieta,” offered the evening’s finest singular eruption of tasteful and musical melody in his declaration of love.

His two Act II exchanges with Fedora, the first one underscored by a performance by pianist Boleslao Lazinski (Bryan Wagorn), during which he reveals that he did, indeed, kill her fiancé (prompting her to write an incriminating letter to the St. Petersburg police from Paris) and then, later, that he only did so not out of political motivation, but because Vladimir was having an affair with his wife, roared with intensity.

“Roared” is the operative word since this was as loud as I have ever heard Beczala. While I appreciated his fury, I would have enjoyed a touch of sweetness in his ardor.

Ultimately, Fedora’s incriminating letter ends up wreaking havoc in Russia where Loris’s brother and mother die as results of its inaccurate revelations. This all comes to a head in Act III, rupturing Fedora and Loris’s domestic bliss in a Swiss villa, in which the princess’s role in the events is revealed, Loris curses her, she takes a swig of poison she kept concealed in an ironically Byzantine cross, and she dies.

Amidst anguish, pity, and death, Beczala and Yoncheva blazed through the opera’s conclusion with an instinctual ease, culminating in a touching and emotional death for the title character. It was a thrilling ending to the evening and the strongest single case for Fedora as dynamic, viable theatre.

The supporting cast is peopled with servants and friends, none of whom are especially integral to the plot. Rosa Feola, luxuriously cast as Fedora’s featherbrained friend Olga, shone amongst them—her flutey soprano, its evenness a welcome counter to Yoncheva’s, piped in with genuine sparkle and humor.

Lucas Meachem, as the diplomat De Siriex, started out heavy on the declamation but eventually gave way to some especially suave singing while Jeongcheol Cha brought real gravitas to his brief Act I appearance as the coachman Cirillo. Lucia Lucas, as the police inspector Gretch, sang this talky music with a refreshingly solid sense of line.

David McVicar’s staging, if such perfunctory traffic direction lifted directly from Sardou’s stage directions can even be called a production, is neither inspired nor significantly different from the 1996 Beppe de Tomasi production it replaced. While the show flows easily as the principal characters circle each other like bourgeois boxers, with operas like Fedora (which even the director himself admitted he struggled to take seriously), such overall laziness, lack of inspiration, and little care maddeningly erodes one of the standard repertory’s most fragile swaths of worthy works.

His main intervention, the loitering “ghost” of Fedora’s philandering fiancé Vladimir, clarifies only the extent to which the director has misread a play whose plot is more straightforward than its given credit for and an opera whose sweaty, romantic interpretation of that play evades much subtlety.

Why does Fedora waltz with him during the Act II orchestral interlude while Loris’s love theme swells beneath? Why does she longingly look at him as she prepares to poison herself in Act III, weeks after learning that he had been cheating on her? Why is his laser-printed portrait hanging on the wall in every one of the play’s three settings? Whatever the answers may be, they seem to scarcely matter to the director. Just don’t forget to untuck your red sauce-smeared bib, McVicar seems to say, before washing his own hands.

The physical production, save for Brigitte Reiffenstuel’s sumptuous gowns and the numerous lovely coiffures and wigs, looks cheap. Charles Edward’s set, which deteriorates into abstraction starting in Act I, looks under-furnished yet cluttered with several dangling ceiling panels that suggest a theatre, a barn and a disorganized linen closet simultaneously. Adam Silverman’s lighting is subtle, though certain cues will likely tighten up as the run progresses. Marco Armiliato’s approach in the orchestra pit was similarly uncreative, though the strings in particular played beautifully.

The success of this Fedora may come to bear upon whether the Met (or Yoncheva) will sustain any commitment to the non-Puccini operas of Italy’s 19th-20th century (and if I might ever see the production of La Wally I have been hoping for since middle school).

Yet these works, melodramas given room to breathe, are the nucleus of what we now know as “operatic” and are as fundamental to opera’s genealogy as anything written by Monteverdi, Mozart, or Verdi. A Fedora now and again is a fine occasion to pop a cork. I’m deeply grateful that, at least for now, the Met seems to agree.