Director R.B. Schlather deftly walks a porous boundary, casting this primordial paroxysm of Germanness as a dialogue between its naïve and moralistic narrative with its outsized legacy. 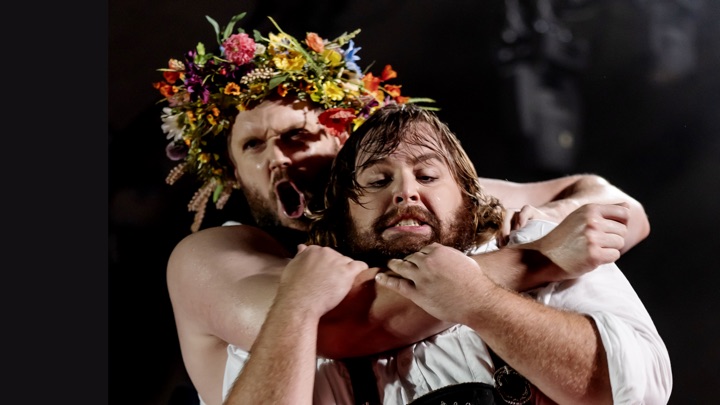 Ahead of a Parisian production of Carl Maria von Weber’s canonical 1821 opera Der Freischütz, Alex Ross, in Wagnerism, paraphrases Wagner’s opinion that the “supernatural dimension of Freischütz —its magic bullets, its enchanted forest, its Wolf’s Glen —would mystify Parisian audiences who were accustomed to promenading in the Bois de Boulogne. Only the melancholy, questing German spirit, steeped in the lore of the Black Forest and the Teutoberger Wald, could feel at home in Weber’s opera.”

For much of what falls under the umbrella to “German opera,” from progressive innovations in musical storytelling to nationalistic overtones appropriated to a eugenicist end, this opera is the furthest reach of its genealogy. And its robust choral and orchestral writing, Leitmotives, folksy Hofbrau air, and twinge of the supernatural in its triumphant creation of atmosphere are palpable in the works of German composers that would follow (namely Wagner), many integral to both the construction of the identity Germany presented to the world as well as the German understanding of that identity.

For Wolf Trap’s production, the first opera in its summer season (billed as The Marksman), director R.B. Schlather deftly walks a porous boundary, casting this primordial paroxysm of Germanness as a dialogue between its naïve and moralistic narrative with its outsized legacy.

It’s a quirky, spiky Oktoberfest nightmare that, with some small liberties taken on the libretto, remains atmospheric and eerie (lighting designer Masha Tsimring gets some credit for that) while letting an excellent cast of young singers thrive in the intimate environment of Wolf Trap’s Barns, a venue perfectly suited to this sharpshooting show. 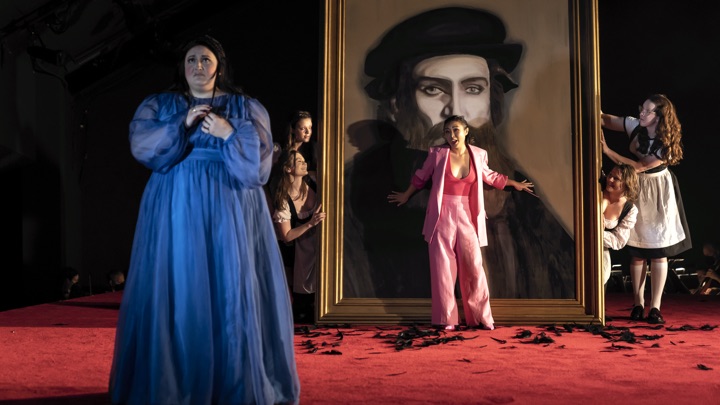 In Schlather’s vision, Max, a forester in love with Agathe, daughter of a prominent forester, is tentative and bullied. To win Agathe’s hand, he must score in a shooting trial. Robert Stahley presents as earnest and childlike, but his firm, muscular Heldentenor is anything but. Though a certain limpidity or lyricism is absent from his singing, he tirelessly exudes gravitas and individuality throughout a production that has him rolling on the stage nearly from his first entrance.

The trouble is that Max is not a very good shot; to pass the test, he is drawn in by the Mephistophelean Kaspar, another forester with vendettas against Max, Agathe, and Kuno, her father. Cory McGee, whose icy bass is complemented by an immense and sadistic physicality, eats the part for breakfast. Kaspar invokes Samiel, the “Black Huntsman,” to guide one of the bullets he will forge with Max in the opera’s Wolf’s Glen scene to hit Agathe instead.

Schalther’s most significant liberty with the libretto (other than cutting most of the spoken dialogue) is removing the character of Samiel, a pivotal spoken role, and instead having Kaspar take his lines in their exchanges.

In absenting a physical manifestation of evil, the groupthink-in-Tracht so viciously embodied by the chorus, musically incisive and dressed excellently by Mattie Ullrich, is concentrated and fills that physical void with something more abstract and nefarious. The opera itself becomes what it eventually begot before our eyes —and there yet remains a love story to resolve! 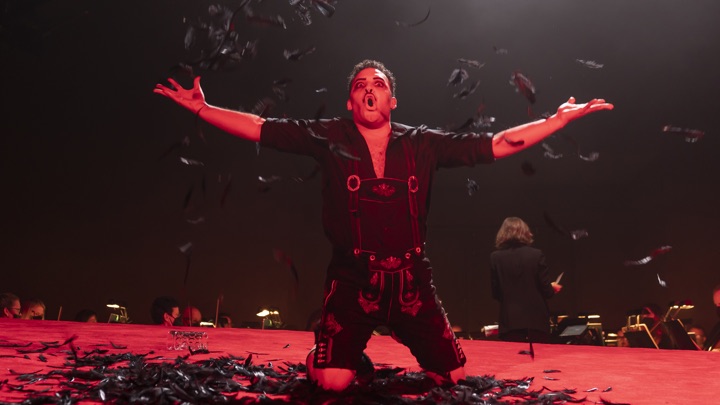 D.C. audiences have had ample opportunity to hear and be impressed by Alexandria Shiner, but nowhere has she shone as brightly as she does here as Agathe. In what was otherwise a very loud evening, the intimacy of the Barns posed no constraint to Shiner’s huge, glinting soprano —she manipulates it, slimming down her dynamic and resonance, with such skill without sacrificing her tone’s natural refulgence that it only draws attention to her attentive, fluid phrasing choices. Her aria, “Leise, leise,” ebbed gently at first, gradually coaxed into a soaring showcase.

That she appeared somewhat staid onstage only gave Sunwoo Park’s spunky Ännchen something to play off of. Schalter positions Ännchen, a perky young relative of Agathe, as a wry conduit between the characters and the audience. If Park’s nondescript yet competent soprano wasn’t especially memorable, she displayed a unique comfort with the text, her lines getting laughs even before the surtitles caught up.

Ännchen’s breaking the fourth wall is effective preparation for the final scene, when the whole company faces the audience to deliver the story’s very Lutheran moral about trusting in the Father’s gentleness after Agathe, through the providence of a local hermit (fabulously costumed and richly sung by David Weigel), has survived her otherworldly assassination attempt.

Buoyed by the orchestral playing under Lidiya Yankovskaya, scarily cohesive with a sense of Romantic indulgence in both timbres and tempi, the didactic resolution fits the production’s exaggeratedly simplistic Personenregie, even if bringing up the house lights did not do quite enough to bridge the gap from their world to ours.

But that ungainly jump from subtext to context that modern performances of canonical works often ask us to make is all too fitting a parallel for this opera itself. Der Freischütz was never a repertory staple in the United States (nor, as Wagner predicted, in Paris). But, as this excellent staging shows, it is palpable and illuminating everywhere.