Yuval Sharon at Boston Lyric Opera has brilliantly found an interpretative middle ground for La bohème by presenting the acts in reverse order. 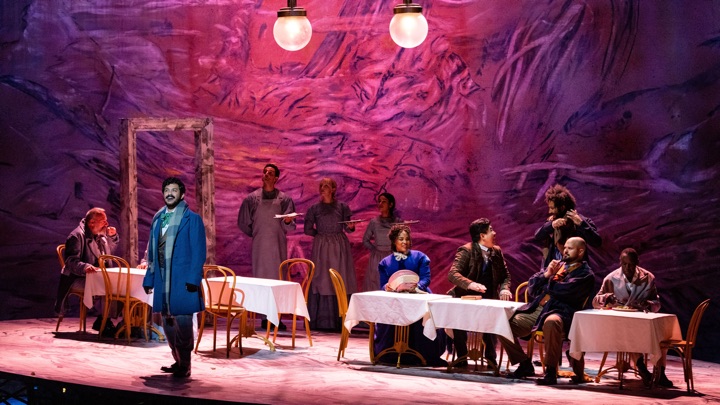 Different operas wear out different critics, but for most writers, I’d wager the answer to the wistful question “What brings you back, time after time, to La bohème?” is probably “I have to cover it.”

And while I wouldn’t seek it out every season, I actually don’t mind La bohème (Tosca, on the other hand, I think we need a break from.)  I appreciate its tunefulness, its brevity, how self-contained its libretto is, and the sentimentality with which it treats its naïve characters. Its realism is infinitely more graspable than any other opera of its era and the swaths that treat student life still ring startlingly true.

Yet its predictability and ubiquity (and its predictable ubiquity) are tiresome and its perennial spinning as a “newcomer’s opera” punishes audience members already comfortable in the opera house. If ballet has Nutcracker to get people in the door, at least it’s confined to one part of the year. With Bohème spanning from Christmas eve to the “stagion dei fior,” “perennial” is an understatement.

So, what to do? Wow the newbies with mindless romance or throw the minted aficionados something to chew on? Each opera has its own interpretative middle grounds and Yuval Sharon at Boston Lyric Opera has brilliantly found one of Bohème’s by presenting the acts in reverse order. 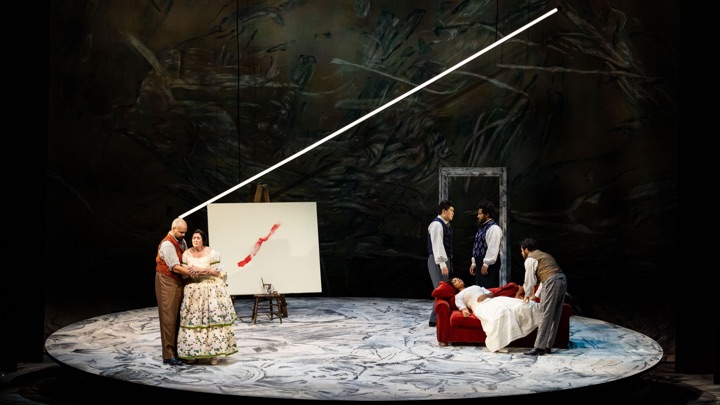 Sharon’s careful production (here staged by James Blaszko), which originated at his home base in Detroit, visited Spoleto, and will journey to Philadelphia this spring, belongs to a growing class of productions (consider Christophe Honoré’s Divadienst Tosca for Aix in 2019 or R.B. Schlather’s Der Freischütz at Wolf Trap) that are less preoccupied with dialoguing with the itself rather than with the audience’s relationship to the opera.

As certain operas, through pop culture, repeated performance, or both, harden in the collective conscience, an examination less of what got them there and more of what holds them there makes a ready, if thorny, postmodern rejoinder to presenting these titles at face value.

After an evening of, like Mimì, creeping up the stairs to peek into the garret, an audience primed to project a nostalgic, overly familiar gloss on these rather vague characters gets the door slammed in their face just as something interesting is happening while Mimì expires. That destabilizing realization in the ur-Bohème’s final moments, that we are actually not so many steps ahead of these plucky kids we have been peering in on, is what shatters.

The “lessons” of the opera are easily extracted from the opera house, but we are pointedly reminded much too late that they will be much more painfully (and privately) internalized by the characters. With that lesson frontloaded, a positivistic sense of linear development (that should hardly apply to young people) melts away, as does a quiet sense of guilt for making ourselves privy to so many private moments.

Bohème’s lessons for its characters and manipulations for its audiences are no longer prescribed. And in their place, we can finally (and joyfully) associate freely within the opera itself. 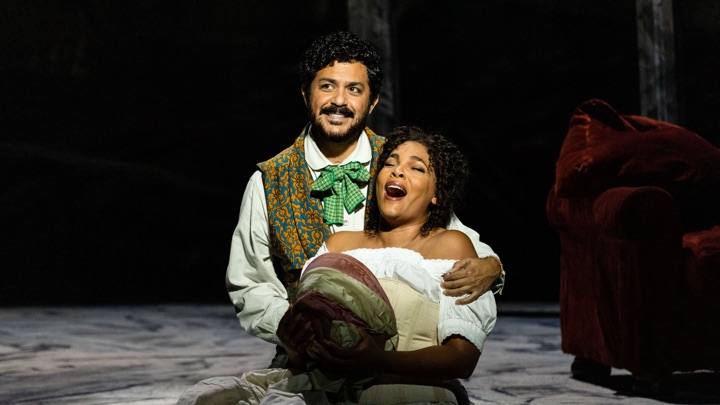 All that said, much of this Bohème is straightforward. There’s not much radical Personenregie at work nor is there any gimmicky updating happening. But beyond the novel, refreshing feel of dislocation within the opera itself, a new chronology means that instances of heavy-handed foreshadowing become retroflexive textual and musical lighthouses for a listener traversing this suddenly unfamiliar piece.

This is represented literally by “The Wanderer,” the production’s least necessary intervention, a warm older gent (Marshall Hughes, a Boston opera scene mainstay) offering intermittent commentary to the audience from inside the world of the opera, à la a less spry André DeShields in Hadestown.

The reverse act order also redraws character arcs. In undoing doom from the end of Mimì’s arc, she becomes an infinitely more interesting (and more present) character from the outset. Lauren Michelle seemed more than willing to carry the afternoon in the role. Both vocally and dramatically, her take on Mimì is uncharacteristically expansive, even if her Italian was, as was the case with several of the singers, approximate throughout, and her rich, even-tempered voice complemented a flirtatious, forthright characterization.

She also holds up well under the primary drawback of this backwards Bohème, the fact it compels her to sing an entire opera with no breaks before finally getting to her big aria. Less fortunate in that regard was the Rodolfo of Jesus Garcia. 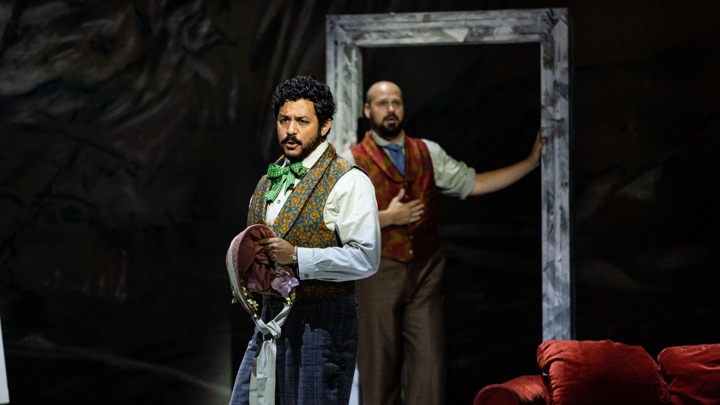 Timbrally, he is a perfect fit, even 20 years after he sang the role in Baz Luhrmann’s 2002 Broadway production; the gentle voice is a youthfully flecked bronze wielded with style and squillo. Yet a strain to reach high notes by manipulating their vowels often rendered entire words unrecognizable and his fatigue at the end of the marathon performance was apparent.

But when a “vecchia zimarra” is one of the more attractive garments onstage, one takes note; while most of the technical elements were carefully derived from images in the libretto (especially John Conklin’s set, a steeply raked lunar disc spinning on a turntable, as well as lighting by John Torres), Jessica Jahn’s mostly period costumes were pretty chintzy.

BLO Music Director David Angus lead an attentively supportive performance from the orchestra which was spread across about 1/3 of Emerson College’s opulent Colonial Theatre (what on earth did they do when Follies opened here?) and the chorus, under Brett Hodgdon, provided a punchy Act II (or was it Act III?).

Sharon’s Bohème, rapturously received at its final performance on Sunday, seems destined to join the regional circuit, if it hasn’t already. But it’s a worth watch, especially for the most jaded opera fan, regardless of how tired of La bohème you are. Because it’s a Bohème both more about itself and more about us than you have ever seen before.