What is there to say about the Franco Zeffirelli Bohème? What is left to say? 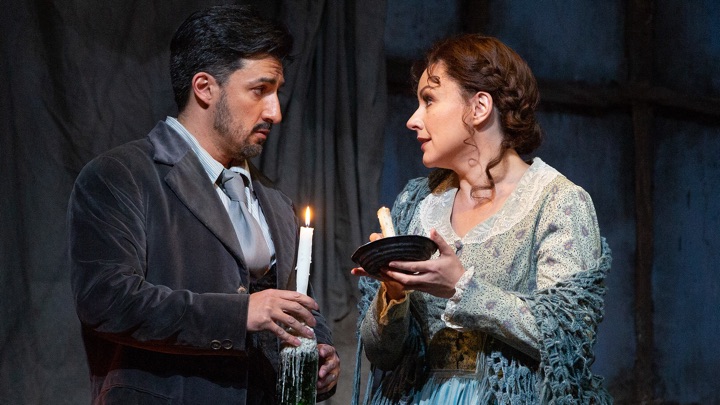 The production turns 40 this year, having premiered in 1981 (which was, incidentally, the year this reviewer’s parents graduated from high school) and at this point is considered, by both its devotees and its detractors, to be indelible—a New York City cultural institution, a fusty old war horse that cannot be gotten rid of. Tellingly, many of the conversations that are had about the Zeffirelli Boheme are not really about the production itself, but about its deeply rooted place in the contested ground that is the Met Opera’s repertoire.

The production itself seems, somehow, to defy critical engagement; with nothing much to say about La Bohème but infinite ornament with which to say it, the Met’s Bohême forces both audience and performers into a state in which commenting on or engaging with the opera itself is all but impossible. In the production’s fortieth anniversary outing, this dazzling effect was broken neither by the cast’s beautiful singing nor by the unremarkable conducting of Eun Sun Kim, in her Met debut.

Musically, Boheme itself similarly deploys a kind of excess that obliterates thought. Jumbles of musical lines —a children’s chorus, a lover’s quarrel, a regiment of soldiers’ drums—stack up upon each other as if daring the listener to doubt that Puccini will somehow make this cacophony beautiful (he will, of course he will).

Beneath it all, the characters are lightly sketched to say the least, and the huge romantic crescendos that pull the opera from one emotional climax to another do not so much distract the listener from Rodolfo’s less than romantic behavior as allow them to never really consider it at all. When his voice and Mimi’s lift in soaring tandem, it’s not so much a question of thinking as feeling, and nobody makes feeling feel as good as Puccini.

Charles Castronovo and Anita Hartig as Rodolfo and Mimi provided that pure emotionality, and even managed to couple it with some nuanced interpretation. His voice is a little darker and more powerful than is sometimes heard in this role, hers is wonderfully rich and complex; together, the fullness of their tones implied depth beyond the ingenue for these young lovers, depth that perhaps a production less staid than the Met’s would have pursued further. 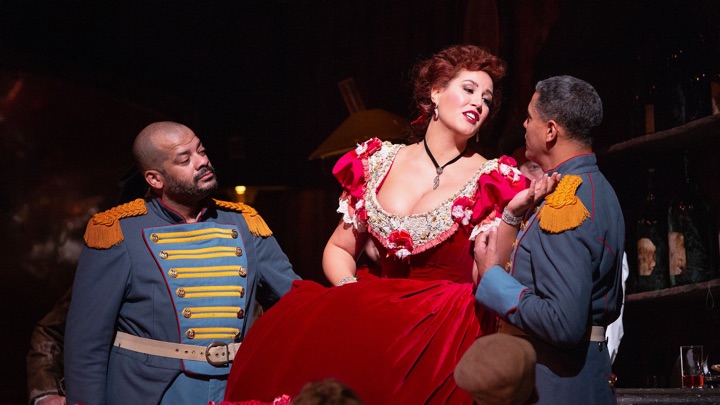 Hartig’s “Mi chiamano Mimi,” for example, had an expansive, unfurling quality, like a flower opening the sun, that showed glimpses of the passion beneath Mimi’s timidity far beyond those of the libretto.

Federica Lombardi, as Musetta, was also in beautiful voice, bringing a playful purity of tone to a role that can at times become burlesque. With these singers mustering not only beauty but also specificity in their roles, the anonymity of Kim’s conducting was disappointing—she didn’t hinder them, or the orchestra, but she left a lot on the table.

Where the spectacle of Boheme’s music stupefies through sheer beauty, the spectacle of Zeffirelli’s design becomes almost claustrophobic in its overabundance: for the audience, for the performers, and for their voices.

In Act II’s Café Momus set, the crush of passing bodies on the double-decker stage is oppressive. At every turn, just when you are on the verge of settling in and really focusing on, for example, Lombardi’s silvery rendition of “Quando m’en vo’”, another horse, or man in bizarre clown makeup, or confusing Marcello background physical comedy bit appears on stage, to scatter that focus once more.

At times, the sets feel literally claustrophobic, like Rodo;fo’s garrett, which, because it is nestled—impressively—into the half dozen Parisian rooftops that fill the stage, is actually so small that the singers can cross it in three exuberant steps. Consequently, they spend scenes just bounding messily back and forth (Alexander Birch Elliot as Schaunard) or pivoting impotently around in place (Artur Rucinski as Marcello).

In addition, because the garrett is essentially a little box thrust forward to the front of the very big box that is the Met stage, through some acoustic balance issue it at times gives loud male voices—comprising 80% of the cast of La Boheme—an unpleasantly direct quality. Finally, and oddest of all, given Zeffirelli’s ostensible investment in excess, the garrett set is downright drab. I know it’s meant to be home to penniless Bohemians, but surely Marcello could muster painting something in that space anything other than in a dusty, post-apocalyptic beige.

If I sound overly cynical about this opera and this production, I really only mean to be so about the latter; La Boheme’s terrible treatment of its women notwithstanding, the overwhelming emotional experience of its music can be devastating, cathartic, renewing—but, hemmed in at every turn by dense, beige excess, the Met’s Boheme primarily inspires polite, stupefied admiration.

I cannot deny, however, that polite stupefaction seems to be just what Met audiences are after. The house was absolutely packed on Tuesday night, and the audience seemed for the most part genuinely thrilled with what they were getting; they applauded when the snow fell on stage in Act III, they applauded when Musetta entered in a horse-drawn carriage, they sprang eagerly to their feet for the curtain calls.

At a performance of Meistersinger last week, the crowd was hardly less enthusiastic, but totalled maybe a third of the house’s capacity. That Meistersinger, another old war horse production by Otto Schenk, had, like this Bohème, nothing much to say about the opera and scads of money with which to realize that lack of vision (they also both had big diagonal staircase sets—was there some sort of bulk deal on those in the 80s?).

I would venture a guess that reviving the Zeffirelli La Bohème annually accounts for a fairly significant piece of the Met’s yearly ticket receipts. I really wouldn’t mind that this Bohème is a little stultified if I felt that the money the Met makes off of it was helping to fund more interesting art elsewhere in the repertoire. But, instead, time and time again, the Met spends its money on saying nothing much at all.

This is, perhaps, the secret to the Zeffirelli Bohème’s forty years of success — that even after forty years of the same fake snow falling on the same fake rooftops, its nothing-to-say is apparently just what the audience wants to hear. Honestly? If that’s what they want, let them have it! But I, personally, look forward to seeing a season at the Met where this kind of theater is the exception, not the rule.