All things were, indeed, made new again, when Boston’s venerable Handel & Haydn Society brought Mozart’s Le nozze di Figaro to the stage, their first time doing so in its entirety, as their 2,576th concert on Thursday. 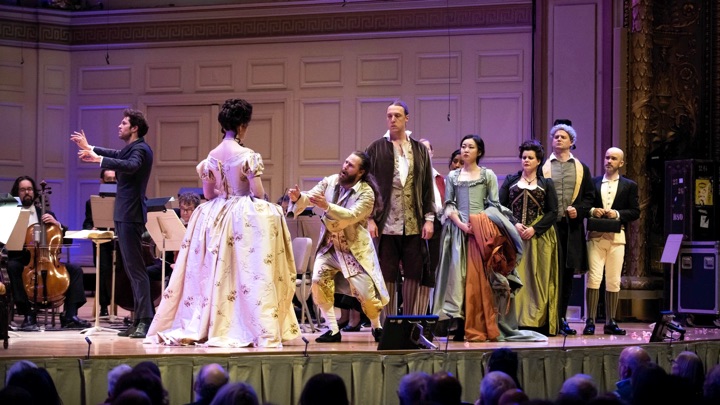 Yet the novelties of the evening did not stop there; under Raphaël Pinchon, Mozart’s familiar score rang out as new, as fresh, and as lithe as one could never hope to hear it.

Pichon’s take is concise but pensive, detailed but unsentimental. From the breakneck impetus of the overture, the high strings glowed with a colorful ebullience, the reeds were rich and plangent, and brass shone through with muscle and refinement. But the pallet was deployed in good measure with subtle, unexpected uses of rubato highlighting multipart orchestrations undergirding the vocal lines.

Even the secco recitatives felt new and exciting, played as they were on fortepiano with Ronan Khalil’s light touch. With clean, almost surgical incisions into the score, Pinchon’s happy vivisection of Figaro yielded a performance uncommonly alert and unusually alive.

This was aided and abetted by James Darrah’s lucid direction. While most may know him for more avant-garde interventions, this period-dress semi-staging unwrapped Mozart and DaPonte’s intricate farse with more ease, clarity, and depth of characterization than many out-and-out productions do.

Ease, clarity, and depth of characterization could just as easily describe Ying Fang’s Susanna. Her silky soprano has taken on an even greater richness since I last heard her in 2017 and its sweetness and ease spans her entire range. She’s also a spunky actress and her take on the role was as smart as it was domineering.

The Figaro of Polish bass Krzysztof Bazyk was congenial and technically strong, with arrestingly solid breath control, but he was more “basso” than “cantante” and his conventional Slavic timbre, with its taut sound and even, icy resonances, only occasionally gave way to a more supple baritone range. His is a more mature voice than Figaro calls for, though his high-spirited acting offered a helpful balance.

If Cody Quattlebaum sought a similar balance, it proved more elusive. In certain moments, his take on the predatory Count Almaviva was truly swoon-inducing with its pianissimo sweetness. But more often, the role was semi-declaimed with a particularly roughshod fervor that sounded out-of-place (and, eventually, tiresome) in an otherwise meticulously measured performance.

As the Contessa, Jacquelyn Stucker presents a unique case; she has a sumptuous voice with low notes that seem to bob up from nowhere, and she’s a potent actress with a regal bearing and expressive eyes. But whether from nerves or a lack of authority with the material, her interpretative fingerprint is faint.

Occasionally, though, her capacities coalesced to form something truly showstopping: “Dove sono,” held aloft by the orchestra’s feather-light support and accented with tasteful ornaments, was an especially delicate moment.

Mezzo Paula Murrihy put her grainy, high-set mezzo to use as Cherubino with a vigorous “Non so più” that settled into a touching (and musically suggestive) conclusion. Scott Conner delivered laughs as Bartolo and Antonio, Maya Kherani was an unusually plaintive Barbarina, and Mary Ann McCormick was a patchy Marcellina.

Zachary Wilder, fey and fabulous, did the bulk of the comic heavy lifting as Don Basilio & Curzio. And it was a particular treat to hear Basilio’s often-cut aria, especially when performed with such precision and zeal as it was on Thursday.

It’s a rare and wonderful gift to feel like you are hearing a familiar score for the first time; Pinchon’s palpable leadership of the soloists and orchestra, as well as a crisp and exacting Handel and Haydn Society Chorus, offered just that. With just one week before Thanksgiving, this performance was something to truly be grateful for.