The monsoon outside was no match for the torrents of gorgeous, dramatic singing and playing that was unleashed inside George Washington University’s Lisner Hall Sunday afternoon when Washington Concert Opera, in a glorious deluge of Léo Delibes, presented Lakmé to round out its return season. 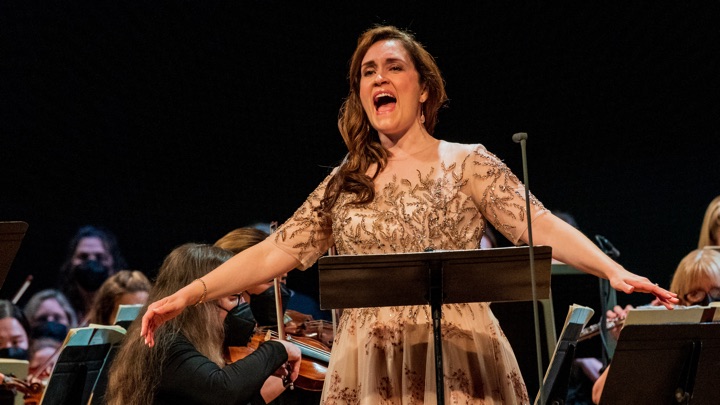 In some ways, this was a standard, high-quality WCO production. Over the past several years, Music Director Antony Walker has shown a particular flair for grand opéra and its late 19th century descendants (Hamlet in 2019 and Hérodiade in 2016 are two prime examples). But in other ways, this production had a theatrical sense imported by its sterling cast (as well as—gasp!—a prop or two) that exalted it from the often earthbound realm of concert opera and into something as stimulating as an intellectual exercise as it was thrilling a performance.

Amongst other things, WCO deserves extreme kudos for presenting this opera in such a forthright manner; Lakmé is a problem. Its exceptionally poor libretto, by Edmond Gondinet and Philippe Gille, often seems at odds with Delibes’s exceptionally evocative, luxurious score. While the music wafts and putters along, conjuring a swirling if superficially Orientalized and unspecific fairytale India, the libretto offers a hideously offensive ethnographic gloss on “Indians” seen through the eyes of the British during the time of the Raj.

Indeed, while the flora, fauna, and the Hindu pantheon are cited at regular intervals throughout the opera, the Indian people, Lakmé chief among them, are savage, mercurial enchantresses incapable of monogamy or quiet shopkeeping. Even if the music is clearly on the side of the titular heroine, fronting her self-sacrificing nature and lack of guile against encroaching colonial forces, the sheer amount of airtime devoted to racist English ladies chattering in bad faith is overwhelming in its cultural ungainliness.

But Lakmé’s rare status on the operatic market as of the past 75 years cannot alone be credited to its weak libretto. Its opulent score, packed with arias, ensembles, and choruses, seldom digs deeper than surface-level in its exploration of the characters, a well-meaning daughter (Lakmé) of a vehement Brahmin (Nilakantha), a British soldier enamored at the sight of her (Gérald), and his colleagues, friends, and fiancée. How many other operas with genuine staying power feature both a duet about trees and a bravura aria with obligato glockenspiel?

So, while one can sidestep many potential pitfalls of staging it by performing it in a concert format, it remains a vast order for its leads to put over demanding music. Such are the necessary conditions for a Lakmé revival. 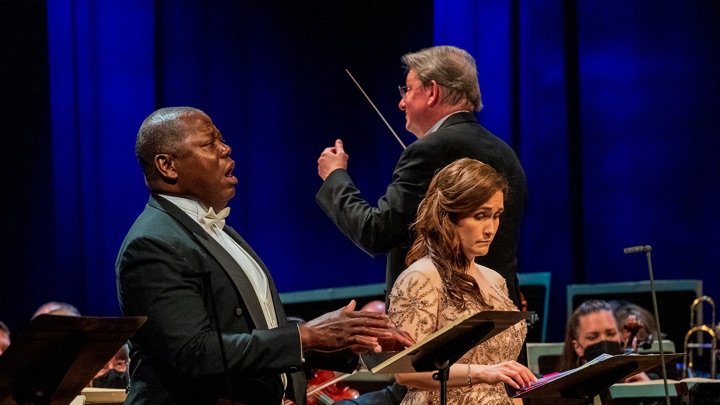 But Erin Morley is such a singer to negotiate those challenges. In fact, in her debut performance of the role, it was one of those rare instances of a singer dignifying a part as opposed to the usual other way around. She is charismatic, authoritative, and tireless, her impeccably detailed singing as subtle yet expressive as her onstage demeanor with her slightly tremulous tone lending an air of vulnerability unique from other, more girlish sounding interpreters of the part.

From the very first offstage entrance, floating along the decorated vocal line with immaculately placed high-notes and trills, Morley’s crystalline yet solid soprano expanded to meet every one of the role’s requests and then some as she conjured plaintive piety, blind romantic impulse, and earnest decisiveness.

Dramatically, Lakmé is not the meatiest role; daughter of a priest and a Hindu priestess, she falls in love with the already-betrothed Englishman Gérald when he happens upon her lost bracelet on the banks of the Ganges where she has been gathering flowers. Her father uses Lakmé to identify Gérald in the market upon which he stabs him.

Lakmé spirits him away to nurse him back to health, only to nibble of the poisonous datura leaf and expire when he resolves to rejoin his regiment and abandon her. That moment in the marketplace is the Bell Song, the opera’s legendary coloratura test.

Morley moved through it with accuracy and ease, varying her attack for differing narrative effect and rarely altering her sound across her range (including a briefly interpolated G-sharp). And in her lullaby that begins the final act, she manipulated the dynamics of the song, slimming her tone to a whisper then opening up to a full-throated sigh to mesmerizing effect.

Opposite this delicate but fully realized Lakmé, Frédéric Antoun was an electrifying Gérald, his irrepressible theatrical sensibility spilling beyond the usual boundaries of opera in concert and exploding as full-throated singing and extroverted theatricality. Antoun channeled the part’s haughtiness and amorousness, gazing at Morley with slack-jawed desire. 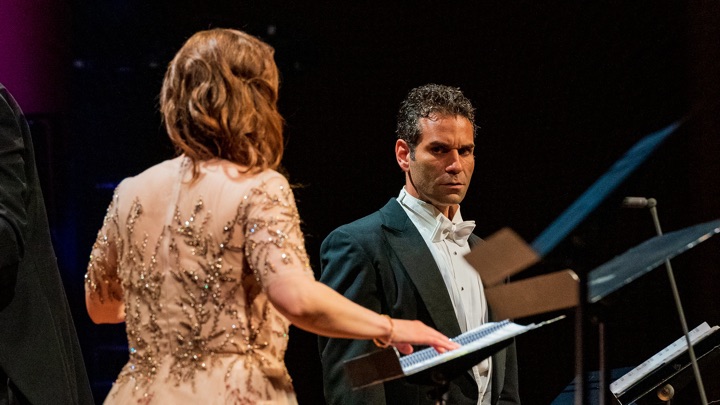 His voice betrays a Jonas Kaufmann-like coloration with greater linguistic incisiveness and more reliable placement; it’s a complex, contoured, somewhat covered sound capable of attacking the role’s lofty tessitura with intensity. The result was equally hypnotic, such as in the idyllic ‘Ah! viens, dans la foret profonde,’ and often extremely exciting, with occasional blemishes in the sound excusable byproducts of his full-throttle attack, as in his Act III aria, “Qu’ autour de moi toute sombre.”

Bass-baritone Alfred Walker, as Nilakantha, matched him in intensity. Walker has got a unique brand of mellifluous snarl down pat and, as a caricature of a seething religious zealot, calibrated his voice and delivery with sensitivity. This was most apparent in his aria, “Lakmé, ton doux regard se voile,” an uncharacteristic and plangent outpouring of fatherly love, which displayed real delicacy and won a long ovation. Elsewhere in the case, Taylor Raven’s grainy, sensuous mezzo as Mallika contrasted nicely with Morley in the opera’s ultra-famous Flower Duet which Walker relished in.

Theo Hoffman, as Frédéric, Gérald’s officer friend, sang with long, generous phrases, especially when he persuaded Gérald to return to his military post as he convalesced from his stab would. Véronique Filloux, whose own vocal capabilities appear to be not far off from Morley’s, was a charming and forthright Miss Ellen, Gérald’s oblivious fiancée, along with a pair of mezzos, including a slinky Lindsay Metzger as Miss Rose and a striking, camped-up Megan Esther Grey as the bigoted governess, Mistress Bentson, rounded out the rest of Major Grey’s social circle.

Walker knit the performance together, relishing in the score’s swirling crowd scenes and languishing, romantic duets. His affinity for this type of music is obvious and he lavishes a propulsive plushness on every note (with some cuts – the Act II ballet was omitted here).

Lakmé will return to the international scene in the fall when Laurent Pelly’s production for Ganges veteran Sabine Devieilhe will sing the role at the Opéra Comique, also opposite Antoun and featuring “new dialogue adaptation” by Agathe Mélinand.

Whether or not the opera will take root again here remains to be seen. But as of Sunday, the western hemisphere has a powerfully persuasive champion for the part in Erin Morley and D.C., awash in a spectacular storm, had its finest night of opera all season.