This solid if not stellar performance finds our diva in particularly passionate form. Maybe they should have re-titled it Maddalena? 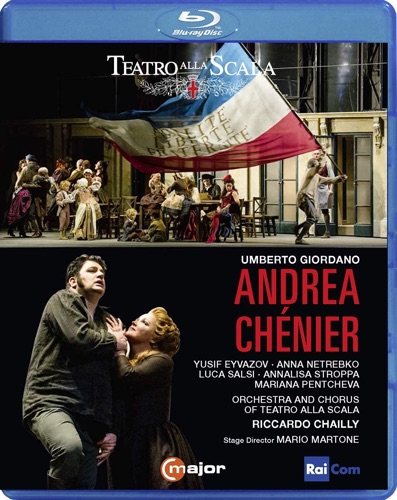 I have a friend who travels for business and is what I would call a Level 2 opera fan. He enjoys attending performances and checks in on the radio broadcasts, knows his singers, but not a serious record collector. Nothing like the hardcore addictions of Yours Truly who’s still waiting for that 12-step Opera Program to quench my unending thirst to own every recording ever released (and a few that aren’t).

Anyway, my friend found himself in London in 2015 when Covent Garden was doing their new production of Umberto Giordano’s Andrea Chénier with Jonas Kaufmann and Eva-Maria Westbroek and bought himself a ticket. He ended up going back a second time and he also brought me back a program, bless him!

When I was interrogating him later for every nuance and joy explosion of the performance he said to me, completely innocently and without a hint of guile, “I don’t understand why they don’t do this opera more often.”

Now that we’ve all had a knowing chuckle, we can admit that when it comes to Chénier and the tenors who can actually do it justice, many are called but few are chosen. The Metropolitan Opera has only had five runs of Chénier since I’ve been an opera fan and I’d venture that a couple of those gentlemen weren’t necessarily to the manner born. San Francisco has mounted it exactly twice in the same timeframe. LA Opera has never performed Chénier although I remember whispers about Mirella Freni debuting her first Maddelena alongside Placido which evaporated into a puff of tri-color smoke.

As a matter of fact the only time I’ve ever heard any of Chénier performed live was back in May of 2017 when LA Opera presented Anna Netrebko and Yusif Eyvazov in a gala concert where, in the second half, Mr. Eyvazov offered up the Act I “Improvviso” and then they both did the last act run up to the guillotine in display of vocal fireworks I’ve only just recovered from. I was in the third row. It makes a difference.

So naturally when our friends at C-Major announced that they were going to release the December 7th La Scala season opener of that same year on Blu-ray with the aforementioned tenor / soprano / husband / wife / couple I was eager to relive some of the experience.

I had a bit of déjà vu right off the bat when Riccardo Chailly, the current Music Director of La Scala, sauntered into the pit. He was also at the helm of the last new production in that theatre (1985?) that starred José Carreras and Eva Marton which was later on one of the first laser discs I ever bought. So we know we’re in good hands and he knows where all the bodies are buried.

Somewhat surprisingly, during these regie-times, Italian film and stage director Mario Martone gives us a nearly traditional production in sumptuous costumes provided by Ursula Patzak. Set Designer Margherita Palli lays down an enormous turntable and then proceeds to bisect the stage with a colonnade that handily tricks out as all of the locations required on alternate sides. It also cunningly allows Acts I & II and then III & IV to be played without breaks. The lighting of Pasquale Mari relies evocatively on a lot of chiaroscuro with the rear of the stage mostly pitch black and then principals and chorus lit when necessary or in half shadow. For me it works, but I wouldn’t call it lavish.

Chénier is justly famous for its cameo roles which allow the ranks of a company’s comprimari, the gifted on the rise, or those on the downside of glory, an opportunity to shine. It was a little surprising then that the Incredibile of Carlo Bosi left so little impression. Same with the Countess di Coigny, Bersi, and the old Madelon. Vignettes that in the right hands can make delicious star turns here are presented competently but with little color or character. I honestly expected more from La Scala.

Once we get to the three principals things perk up considerably although more on the vocal side than the dramatic. No surprise that since Chénier’s requirements tend to be almost solely vocal and those equal to the task tend to be histrionically challenged. Involvement mostly centers on keeping focus on the conductor at all times rather than creating a nuanced characterization.

Our Carlo Gérard, baritone Luca Salsi, is a case in point. The man has three settings; loud, louder, and loudest. He hits his marks, sings a lusty “Nemico della patria.” and roughs up our heroine in surprisingly brutal fashion prior to her big scena. Finally caving to the warmth of her woman’s heart he goes from nemesis to champion with only a minimum of vocal nuance but a ton of volume. Don’t count me among the disappointed.

It’s honestly impossible to imagine that La Scala mounted this production solely for the debut of tenor Yusif Eyvazov. It’s more likely that superstar (and super-spreader) Anna Netrebko’s desire to continue her full-frontal assault on the great spinto-dramatic roles in the Italian repertoire was the euphrates from which this production poured forth.

Her Maddalena is exciting in the extreme. From her very first entrance she’s completely in the pocket vocally. The voice just blazes forth and at times her body momentarily shudders from the exertion. There are a few moments when she’s singing of love where her face reads more of vocal ferocity but it’s her dedication to giving her best that makes her who she is.

She’s a beast and so rare that as this voice has developed in size it’s quality, especially its beauty in the upper quadrant, has never been compromised. She’s radiant throughout and gives a heartrending account of “La mamma morta” that takes the ending as writ and doesn’t invite applause. She even has a bit of business during the prelude to the aria where she starts undoing the front of her bodice, readying herself to give in to Gérard’s demands before succumbing to her own weariness that’s particularly moving. Oh and the outcry at the end of tribunal is goose-pimply.

Which leaves us with our evenings tenor. Mr. Eyvazov was making his debut at La Scala on opening night in a brand new production co-starring his wife who’s arguably the most important opera singer in the world. The pressure on him is palpable. His glance hardly strays from the conductor all evening and at the calls at the first break he’s deep breathing during the bows and looks happy but overwhelmed. The voice doesn’t have a traditional Italianate sound. His timbre tends to be on the dry side and the top doesn’t open up as much as you’d like it to. I also have to mention that sans his usual face-contouring beard and with the addition of about 30 pounds since I had seen him seven months prior he was literally unrecognizable at his entrance.

The plus side to this, and I’m not kidding, is that he sings better, with fuller support and more open phrasing, than I’ve heard from him before or since. There’s something to be said for ballast. His “Improvviso” is solid as is his “Come un bel di Maggio” and he’s an attentive and generous partner in both their rapturous duets.

Maestro Chailly was only 64 years old when this was filmed so still in the first bloom of youth as conductors go. He’s made some interesting choices since taking the helm of La Scala. He has presented the original version of Puccini’s Madama Butterfly (a curiosity at best) and performing Turandot with the Luciano Berio reworking of the finale (which I abhor).

His influence on Giordano here amounts to a strict adherence to the composer’s writing and not allowing breaks for applause anywhere. To my mind this diminishes one of the primary joys of a piece like this and stops that great circle of energy that can exist between performers and their audience. Nonetheless his attention to detail in this multifaceted score is sovereign and the orchestra outdoes itself with both romantic sweep and clarity time and again.

The La Scala Chorus deserve a very appreciative nod here for giving the most dramatically involved performance I’ve ever seen from them as a group. They also have a few stretches in this staging where they have to remain literally frozen and they pull it off to magnificent effect.

Video Director Patrizia Carmine does a good but not ideal job with her many cameras. Some of which are up in the flies pointed straight down that afford some dizzying and slightly off-putting perspectives. She also uses some unnecessary fades, both in and out, that make you think there’s a change of scene about to happen. The same annoying style she’s employed in the past.

Mostly the lens is pointed where it should be and the 4K cameras provide a razor sharp image that’s a pleasure to look at. Extraordinarily vivid. Sound is mastered in both PCM Stereo and a nifty DTS-HD MA 5.1 which will literally make you think you’re sitting in Milan. Subtitles in English, German, French, Korean, Japanese, (and if you want to sing along) Italian.

So for fans of this opera and, most especially, this soprano I’m calling this a must have. This solid if not stellar performance finds our diva in particularly passionate form. Maybe they should have re-titled it, “Maddalena”?