Ringing in my queers 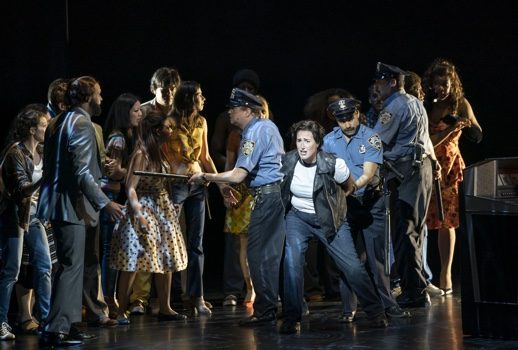 I was impressed with the libretto particularly, which did an excellent job in creating characters that felt more or less lived-in in an extremely compressed time period (the whole opera is only 75 minutes long, and almost half of that is taken up by the raid and subsequent riot).

We have what could easily have become a list of queer archetypes-the drag queen, the butch, the femme, the young hustler, the go-go boy- and yet every character gets a few specific lines that makes him or her feel real.

Carlos (Brian James Myer, a baritone to watch out for with a lush voice that never sounded strained, even in the tensest moments) a teacher fired from the Catholic school where he works because “think of the kids” sings a beautiful arioso section about his pleasure in seeing his students figure things out for themselves.

Wonderful, powerful Maggie (Lisa Chavez, who impressed with a lovely tone and plenty of power), the butch lesbian who starts the riot by screaming “No, just no!” calls a harasser “micro-dick,” combining convincing tough-gal bravado with likeable vulnerability. The characters are diverse, and the show was cast accordingly, with attention paid to the role of trans people of color at Stonewall, something that has been historically overlooked.

Iain Bell’s music is thrilling; he writes well for the voice, though poor Andy (Andrew Bidlack, who did a nice, if occasionally shout-y job with an extremely difficult part) had a hell of a lot of full-voiced high notes, and distinguished each character with a sort of instrumental obbligato, pairing characters with a single or small group of instruments to great effect.

Even when the pairings weren’t particularly surprising—flute and other high winds with the coloratura soprano—it did much to specify and enliven the characters musically in addition to textually. I was particularly impressed by the writing percussion which I found exciting and tension-building, without resorting to horror-movie dread.

The singing overall was quite good. Mezzo Liz Bouk was a stand-out with his dark, perfectly rounded tone even in a smaller part as a trans woman celebrating the anniversary of her transition. It was also wonderful to watch a trans mezzo portray a trans character on the opera stage. The only issue here was a natural first-night tendency to yell, leading to a few blowouts on high notes and some tired-looking singers at the end. Once they calm down a bit, this will probably be fine. 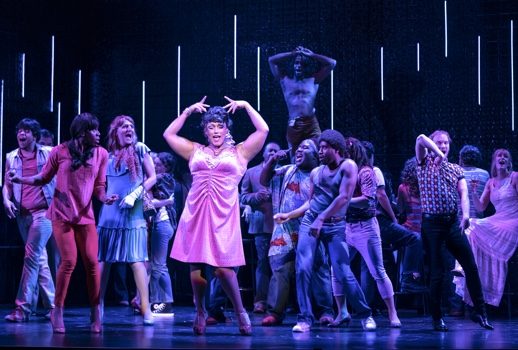 The first long number, “Tonight Downtown,” in which we meet all the main characters is obviously inspired by “Tonight” from West Side Story, but doesn’t feeling derivative (even when it quotes it, as I think it does. There was a “Promises, Promises” quote in there too).

Instead, I was excited to hear all the characters, who’d previously sung separately about the reasons to go downtown that night, sing together, and impressed at the result. Bell’s ensemble work is strong, with the small ostinato from which he constructs his lines fitting well together and letting individual voices stand out in the collective.

Bell also writes pretty delightful disco tunes in two tracks for the dance scene at the club written for the opera and recorded by Darlene Love, a powerhouse from the Motown era who sang back up with the Ronettes and recorded tracks of her own with Phil Spector. This was, well, really cool, and I was surprised to see how well recorded dance music can work in an opera.

The dance scene, before the police break in and start the raid, was charming; opera singers can’t dance, bless us, and this proved no different. It only added another layer verisimilitude, however; turn the lights up at the club, and you’ll find that basically no one can dance (this reviewer included), so this was more adorable than cringe-worthy. The few hired dancers stuck out like very lithe sore thumbs, and everyone else did their best to keep up.

Then the raid happens.  Mark Campbell’s libretto and Leonard Foglia’s direction earn my highest praise for delicately switching between humor and terror; the first strike of the policeman’s baton was sickening, bringing the scene to a screeching halt.

But as the raid turned to riot, our heroes got in licks of their own, both physical and verbal. A cheerleader-style kick-line erupts around the edges of the riot, a moment of humor that, even if it didn’t actually happen at Stonewall, felt like a tribute to the way queer folks have used humor as resistance throughout LGBTQ history.

When chaos breaks out, the fight choreography, which encompasses at least 50 people and went on for what must have been 20 full minutes, was nothing less than incredible. I can’t even imagine he hours that must have gone into this to make it look both completely chaotic, and extremely violent, and also keep it safe for the actors and legible for the audience.  Rick and Christian Sordelet, the co-fight directors, should have gotten to crowd surf or something at the curtain call.

What fascinated me here, and what will keep me thinking about this opera for a long time, was this moment: as the police burst into the bar, Love’s track cuts out for the voice of Larry, the head police officer (the incredibly powerful tenor Marc Heller, bravo) who returns the show to its operatic musical style.

Recorded music is silenced by live human voices, Bell’s popular music gives way to his dissonant contemporary classical style. It’s as if operatic singing, opera itself, is an intrusive force—the voice of the establishment that breaks into a space of queer connection and joy. As the riot continues, operatic singing breaks down into chanting, yelling, shit-talking. 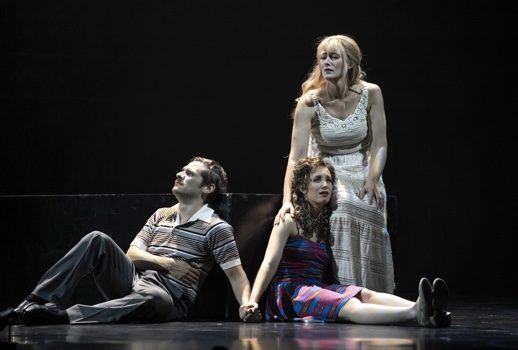 It’s only after the riot is over that we get truly consonant, soaring music, as all the characters come back together in the park. I’m not quite sure what to make of this, because ultimately, I found this extremely successful as an opera, and I don’t think this moment undermines the genre as a way to tell this story.

But it made me think about opera’s particular position as a space that has long been associated with gay men, particularly white gay men, and the ways that it often struggles to open its arms to LGBTQ folks who aren’t white, who aren’t cis, and who aren’t wealthy.

It is strange indeed to watch a story that is fundamentally anti-establishment about a bunch of poor characters, many whom are not white, from the plush interior of Jazz at Lincoln Center in seats that these characters could not have dreamed of being able to afford; hell, that I couldn’t have afforded without getting press tickets. It’s fascinating and complicated, and I want to think about it more.

The Stonewall Inn, as Campbell is careful to remind us, was a filthy mafia bar with no fire exits, no running water, and boards on the windows. This was no heaven, and violence and crime were never far from the doorsteps of these characters.

Populations whose very existence made illegal in their own countries often have to get in bed with other illegal operations in order to create spaces of their own. I appreciated that Stonewall did not shy away from this fact, and didn’t present every person at the bar that night as purely heroic or purely evil.

Nor were the characters aware that this night would go down in history. This is where a nuanced, careful libretto allows for a look back at an event that is now a legendary part of queer history without having its characters be more self-reflective than its audience.

As the sun comes up on Christopher St., the characters limp back on stage and tentatively, exhaustedly look to the future singing repeatedly, “much to be done.” This could have been on the nose, but for me, it wasn’t. There was much to be done. There still is.