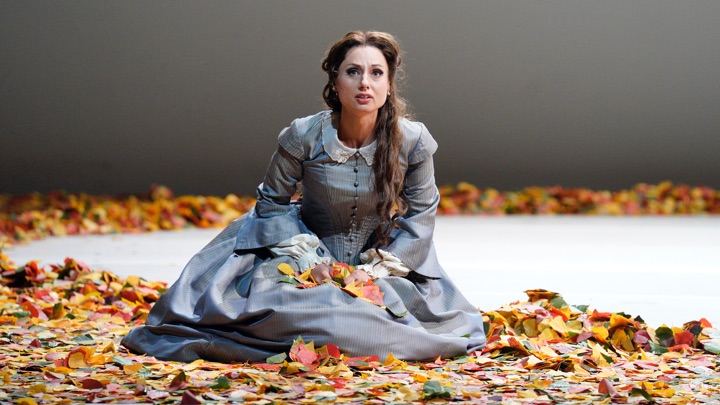 During that period, the staging had traveled to Chicago, Washington, Houston, Geneva, Matsumoto (Japan), and most recently Toronto—a true testament of its stature. SF Opera’s show itself is billed as “Canadian Opera Company production, originally created for the Metropolitan Opera.”

Peter McClintock, who worked with Carsen on the original Met production, took over as Revival Director this time. In the illuminating interview with SF Classical Voice, McClintock said: “I’m trying to represent Robert’s ideas the best way I can and not be slavish to very small technical details.”

Further, regarding Carsen’s staging, he mentioned that it “ends up being like a light box. Inside the light box, Carsen wanted to create a very specific world through the costumes and strip away the houses and gardens to focus on the interrelationships.” McClintock also tapped the original 1997 production (sets and costumes) designer Michael Levine and choreographer Serge Bennathan to assist with his direction.

Famed for its “autumnal leaves and gilded chairs,” this production thrilled me when I finally witnessed it after hearing of its greatness over the years. The physical properties certainly didn’t disappoint! Levine’s towering walls with Christine Binder’s softly colored lights (ranging from sepia brown in Act 1 to shades of blue for the duel scene) were majestic, Levine’s ball gown-and-tuxedo dominated costumes were marvelous,

Bennathan’s dances for the Waltz and Polonaise were breathtaking, and yes, the leaves were gorgeous to look at. My personal favorite was the decision to render the rejection scene in almost monochrome color, it really added the chill effect to the situation! 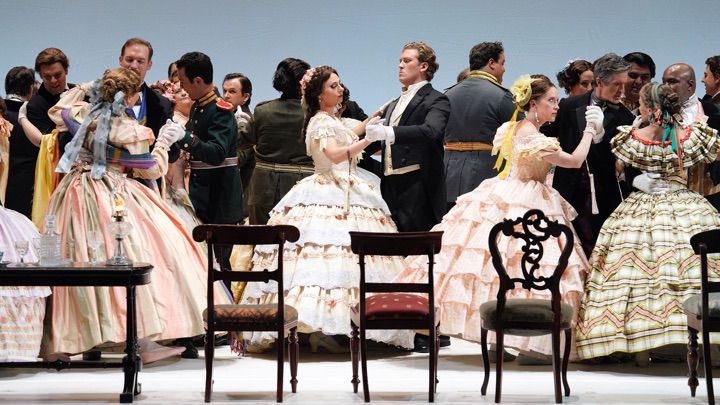 However, i feel that “the light box” unfortunately also functioned as a telescope, putting the spotlight squarely on each performer—including every gesture and facial expression—and on the interactions between them. In an opera of feelings like Eugene Onegin, the success of each scene here became severely dependent on the dramatic ability of each performer, probably more than any other stagings. There simply wasn’t any place to hide for the performers, so to speak. This would be more obvious as we looked at each singer below.

I personally dislike the use of scrim screen in any performances, not just operas, therefore I was disappointed to find that the whole duel scene (Act 2 Scene 2) was performed behind one! I didn’t think it served much purpose; if anything it masked the audience from actually seeing the duel (I barely could see the silhouettes from where I sat) and it dimmed the gorgeous evening-time blue background!

SF Opera assembled a youthful cast for the central characters, all of them were making house debuts on Sunday. Additionally, the occasion served as the American debuts for conductor Vassilis Christopoulos, soprano Evgenia Muraveva (Tatyana) and mezzo-soprano Aigul Akhmetshina (Olga).

Christopoulos led the SF Opera Orchestra in a rather leisurely reading, only kicking into the gear for the dance sequences. He did emphasize the folk aspects of the score, highlighting the woodwind in particular. The orchestra, however, had a tendency to overpower the singers during the climactic moments, particularly in the last 2 acts. In addition, SF Opera Chorus sang enticingly, particularly as the peasant folks in Act 1.

Muraveva made a very lyrical Tatyana, taking an introverted point of view throughout. On its own hers was a valid characterization, but it could lead to sounding a little underpowered compared to other Tatyanas. Particularly in the Letter scene, we got less of the usual explosive outpouring of emotions, but instead it was something resembled a demure young girl finding her first love, giddy and confused at the same time!

She looked absolutely stunning in the evening gown for the last act; the transformation was certainly believable! Her light instrument grew bigger for the final scene, and she imbued it with a certain sense of wisdom. She kept her distance while admitting she was still in love with Onegin, as if such admission proved nothing! It was an interesting take on Tatyana, if not conventional! 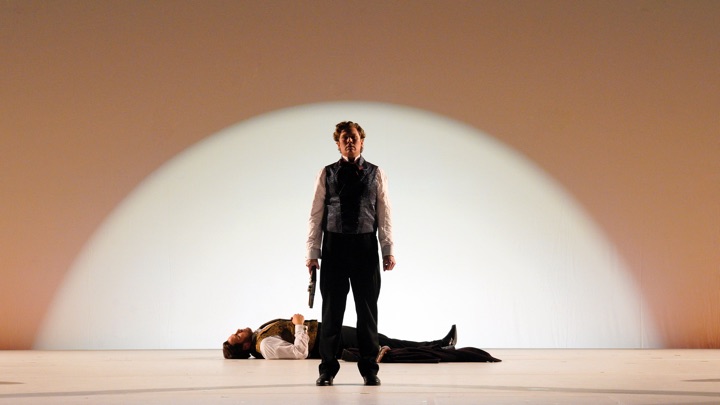 In her brief moment on stage as Olga, Akhmetshina provided much-needed contrast to Muraveva’s Tatyana with her dark and sinewy tone and extroverted disposition. I kinda wished Tchaikovsky wrote more for her character!

Tenor Evan LeRoy Johnson provided the biggest surprise of the night with his wholesome personification of Lenski. I felt like his was the most fully realized character in the whole production, and it was all fully human; you could feel everything from his happiness (Act 1), his frustration, his jealousy, his anger (Act 2, scene 1) to his resignation (Act 2 scene 2) emerging from his body.

His bright and robust voice sounded extremely pleasing to my ears, and his “Kuda, kuda” brought the house down! No surprise that he received the biggest ovation of the night! I’m pretty sure I’m not the only one who would love to see him back to the War Memorial; how about Prince in Rusalka next?

Veteran bass Ferruccio Furlanetto returned to SF Opera stage in the role of Prince Gremin, fresh from exercising his comedic acting chops in last year Così fan tutte . While the voice might have lost some of its suppleness, his take of Gremin’s Act 3 aria was touching and heartfelt, a blueprint of how it was supposed to be done; Prince Gremin really loved his wife!

The two mezzos that opened the show—both ex Merola graduates—Deborah Nansteel and Ronnita Miller, impressed with their winning portrayals as Madame Larina and Filipyevna respectively. It was hard to imagine that this was Nansteel’s house debut ever since graduating from Merola in 2011! Miller was particularly tender and poignant in her delivery as the affecting Nanny, her voice radiated kindness that was so beautiful to see and hear. 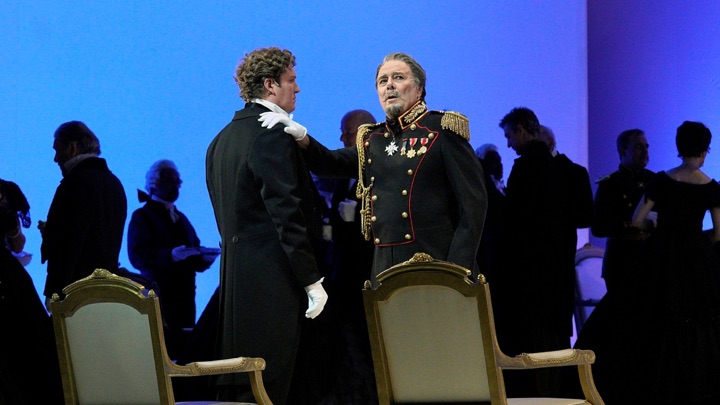 That led us to the Achilles heel of the performance, Canadian baritone Gordon Bintner who made the house debut as the title role. I was initially excited to see Bintner as he was having good reviews in the same role in Toronto, but my excitement gradually dissipated as the afternoon progressed.

While there was nothing really wrong with his voice (other than being swallowed by the orchestra a few times), Bintner’s characterization of Onegin—with his deadpan expression and blank stares throughout Act 1—was so detached and cold that one would wonder what Tatyana saw in him.

In addition, without the audience having any sympathy for him, his desperation in the final scene turned hollow and superficial; no wonder Tatyana flat out rejected him! It was unfortunate that Bintner brought down the show with him, despite the best efforts from pretty much everybody else!

Nevertheless, the high point of Sunday’s show was at the end, when Furlanetto was presented with the San Francisco Opera Medal, the Company’s highest honor by SF Opera General Director, Matthew Shilvock.

Shilvock reminded everybody that Furlanetto made the house debut in La Gioconda (alongside Renata Scotto and the late Luciano Pavarotti) in 1979, and subsequently went on to perform in seven other productions, including the title role of Atilla in 2012, Philip II in 2016 and last year Don Alfonso.

Furlanetto was visibly moved with the gesture as he said “I am extremely touched and proud to receive this honor from the Opera House where I started my international career” to the cheering crowd!

Turning over an old leaf