There was something very Russian—indeed, Chekhovian—about the mix of joy and tears, as the Academy of Vocal Arts performed Tchaikovsky’s Eugene Onegin 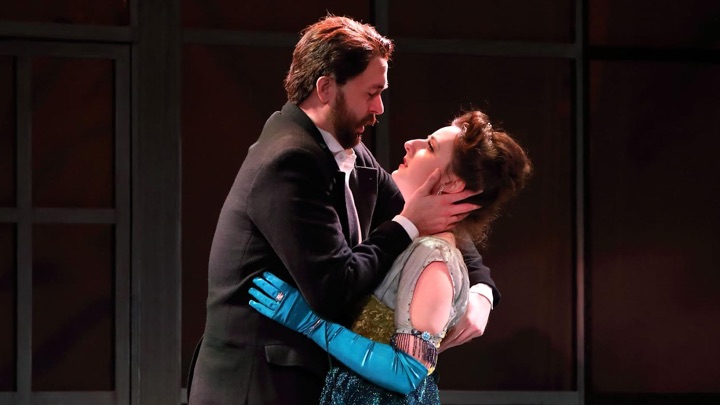 This was a return to live performance in their home auditorium, the Helen Corning Warden Theatre, for the first time in two years.

Tears first. Of course, it starts with our helpless awareness of the horrors of Russia’s war on Ukraine. But there was pain closer to home, as this production was dedicated to the memory of Ghena Meirson, Philadelphia’s resident Russian Opera guru, who died last year.

Ghena’s presence on the faculty of AVA and Curtis was responsible for making the Slavic repertoire a staple here, and for guiding dozens of young singers through it. Indeed, in his final illness, he helped to coach via Zoom the casts of this Onegin. (I should also credit Dr. Julia Zavadsky, AVA’s Russian Diction Coach.)

Ghena’s loss is immeasurable, though indeed his legacy lives on in the singers he helped to shape. Undoubtedly, he would have played for this piano-accompanied Onegin, bringing his characteristic idiomatic and poetic flair. Instead, that Herculean job fell AVA stalwart José Meléndez, who was roundly rewarded with cheers from both the audience and the singers.

And now for the joy—more than I could have imagined. It started with the sheer pleasure of being back at AVA with an audience. But it continued into the physical production, one of the finest I’ve seen here. Often, I feel that the visual work is a weak link at AVA, but not this time. Directed by Richard Troxell (yes, the noted tenor who is also an AVA alum), Onegin had a welcome fluidity, elegance, and sense of drama.

The Warden Theatre is beautiful, but it’s a difficult space to use; its actual stage is boxy and small. Troxell imaginatively moved key moments of the action out into the larger space and focused on very elegant tableaux that brought a sense of refined focus to the work. His directorial imprint could also be seen in the acting, which was thoughtful and rarified. I certainly hope he will be back again—soon and often!

Of course, at this top-tier training program, the primary focus is on the singing. In this Onegin—a challenging opera, especially for young artists not generally coming from a Slavic tradition—their work was of such a high standard that I quickly decided I would come back a second time so I could see both casts, which was revealing and gratifying.

In a few roles, there were some clear distinctions to draw. But taken together, the casts were quite evenly balanced, with particular musical and dramatic moments registering differently from different artists. To be clear, five principal roles here were double cast: Tatyana, Olga, Lensky, Gremin and Onegin himself. Four supporting roles—Larina, Filippyevna, Triquet and Zaretsky—were sung by the same singers at all performances.

Because I think these are names you’ll be hearing again, I’ll run down the list, role by role:

Tatyana. Emily Margevich (a third-year AVA artist) has an exceptionally well-knit soprano of admirable evenness from top to bottom of the range, with enough mettle in the tone to cope with the more dramatic demands here, and good stage presence. Lydia Grindatto (a first-year) has a more lyrical timbre, with a particular loveliness at the top of the range—and almost Lorengar-like shimmer—and she’s an especially appealing actress. Grindatto made more of the Letter scene, but Margevich gave greater dramatic ballast to the finale.

Olga. Chelsea Laggan (a third-year) has a lot of stage charm and a lovely lyric voice that coped well with the role. Anne Marie Stanley (also a third-year) was especially good in the lower range, with an almost contralto-like richness. I also liked Stanley’s more knowing characterization.

Lensky. Zachary Rioux (a third-year) took a bit of time to warm up and bring the voice forward—but when he did, it was excitingly powerful and resinous. He coped with the upper register (though more soft singing would be welcome) and he acted the role with intensity. First-year Luke Norvell was more challenged in the heavier vocal and dramatic passages, but his lyric tenor has an absolutely gorgeous natural color, with a honeyed mezzo-voce in the upper middle—a talent to watch for sure.

Onegin. Two very different performances, and both exceptionally good. Titus Muzi (second-year) cuts a powerful stage figure, with a very together, beautifully integrated voice: only in the highest register did I want a touch more float. Benjamin Dickerson (second-year) has a particularly melting lyrical quality in the middle register, and his elegantly languid presence is exactly what I’m looking for in an Onegin.

Gremin. Peter Barber (second-year) has a promising bass-baritone that to my ear lies too high ideally for Gremin’s marvelous aria, though he managed it well. But Griffen Hogan Tracy (third-year) really knocked it out of the park: this was a glorious outpouring of tone that sounded utterly unforced and elegant. Tracy could (and should!) sing this in a major theater soon.

In the single-cast supporting roles, Monique Galvão (a second year) was Larina; she’s a tall and very striking mezzo whose voice has a fascinatingly dark color, though it didn’t always project as fully as it could have. Fourth-year bass Eric Delagrange (fourth-year) has a powerful bass that certainly does project—but I wish he would ease up on the throttle sometimes: not everything needs to be a roar.

Guest artist Anastasiia Sidorova brought a fulsome mezzo to Flippyevna, along with the welcome pronunciation of native speaker. Finally, in the cameo role of Triquet—treated charmingly here as a sort of Pavarotti-parody—first-year tenor Angel Raii Gomez brought oodles of stage personality, tremendous wit and flare, and a heart-stoppingly pretty lyric tone. Please tell me there’s a Nemorino in his immediate future.

One final observation: when an institution can deliver on this scale in a work as mighty as Eugene Onegin—with multiple casts that include first-year artists—they are clearly doing something right. It’s wonderful to have AVA fully back in action. Only joy here. 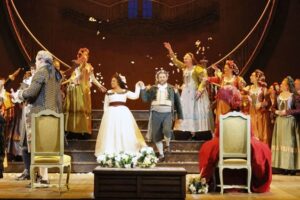