I was reminded at the Met’s season premiere of Eugene Onegin Friday night always to expect the unexpected. 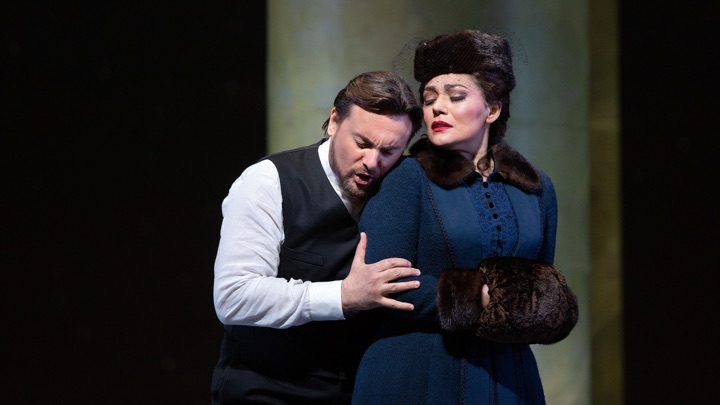 It was my fourth time seeing Deborah Warner’s production of Tchaikovsky’s great opera, and thanks to Ailyn Pérez and Igor Golovanko, I came away with a very different perspective on the protagonists than I previously had.

Anna Netrebko and Mariusz Kwiecien, the premiere’s pairing in the fall of 2013, left me completely cold. Usually such a passionate performer, Netrebko seemed unsure of who Tatiana is, and her unfocussed portrayal created a big emotional hole at the center of the opera. It was hard to feel much for Kwiecien’s haughty, small-voiced Onegin, so his concluding cry of pain went for little.

Later that year, a change in principals transformed Onegin. Much was she was in her Violetta and Elisabetta di Valois, Marina Poplavskaya (in her final Met role to date) was absolutely riveting despite her frequently poor singing. Never over decades of attending nearly a dozen performances of Onegin had Tatiana’s letter scene been such a wrenching journey of a young woman struggling to find herself. Though beautifully sung, Peter Mattei’s Onegin couldn’t help but pale by comparison, though the final duet pulsed with aching pain and regret.

A transformed Netrebko and Mattei returned in 2017 to strike an ideal balance between the ill-stared pair. Her transformation from shy young girl to passionate woman proved convincingly limned, while his cool hauteur melted poignantly. One felt only inconsolable sadness at their missed opportunity at happiness together. 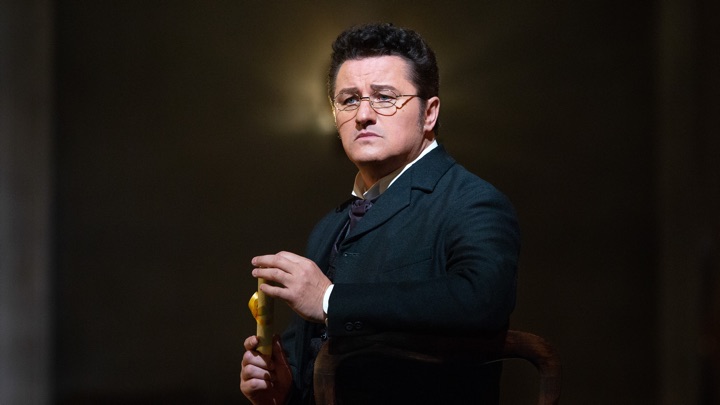 After all these years, I thought I knew all about Tatiana and Onegin, but clearly I didn’t. And it wasn’t a radical regie reinterpretation that was responsible for my altered view. Rather, Pérez and Golovatenko (and to some degree, also Varduhi Abrahamyan and Piotr Beczala as Olga and Lenski) invited me to see their troubled relationship through different eyes.

Perhaps because she was performing the role for the very first time, Pérez’s painfully shy and bookish Tatiana during the opening scene failed to win my sympathy. One felt more for Onegin having to be gracious to a new acquaintance whose social awkwardness verged on the off-putting. Her letter scene that followed, though sung with lush expansiveness, emerged scattered and frantic, never successfully building to the (wrong-head) confidence she should manifest.

Pérez seemed inordinately subdued during her catastrophic birthday party, and a good deal of Tatiana’s gaucheness remained after her marriage to Prince Gremin. Having the Prince sing much of his aria directly to his wife remains Warner’s biggest misstep, especially as the soprano appeared more like a teenager playing dress-up than a woman transformed by wealth and marriage.

On the other hand, Golovatenko portrayed an unusually warm Onegin, His finely burnished baritone gained in strength and bloom as the evening progressed, much-improved over his adequate Met debut in 2019 as Prince Yeletsky in Queen of Spades. While others have been withering in their dismissal of Tatiana’s letter, his response revealed a cool kindness. If (as a man of the world) you’d received a passionate declaration of love from a terribly bashful neighbor you’d spent scarcely an hour with, how might you react? Golovatenko’s eventual brotherly kiss of goodbye found me squarely on his side.

Abrahamyan’s apparent boredom with her boyfriend combined with Olga’s playfully aggressive flirting with Onegin made their dancing at the ball less overtly cruel than usual. Beczala’s hotheaded response had me feeling less compassion for the poet than the numerous other times when I’d seen the Polish tenor as Lenski.

Yet, at 55, he made the years fall away in gorgeous rendition of his celebrated aria which garnered the night’s biggest ovation. Onegin, full of regret over his friend’s surely mortal mistake, just before the duel impulsively embraced Lensky, yet again suggesting that this man was not entirely an unfeeling self-absorbed monster.

Pérez and Golovatenko’s third act invited me to understand that Tatiana and Onegin had switched roles: she had become the clear-headed one, honestly pointing out the impossibility of a relationship, while he was now the impulsive romantic who shunned reality. Her regretful farewell kiss to him was a striking mirror of his to her at her mother’s home. During my many other Onegins, I was on Tatiana’s side and felt little pity for Onegin, but this time Golovatenko’s resounding cri de coeur resonated profoundly.

Given an unsurprising, if ill-considered trend across the globe for some to cancel Russian culture, Friday’s Onegin audience was particularly comforting. I wondered if there might be protests, but none arose. Oddly, Pérez and Golovatenko took their bows together after the show, perhaps for fear that he might be booed. Yet when he finally took a final step-forward bow, only cheers resounded.

The performance also featured several other notable Russian artists in the cast. Elena Zaremba whom I first heard as Olga in Onegin when the Bolshoi came to the Met in 1991 was again Mme. Larina, her mezzo still big and full but increasingly unsteady. Longtime Mariinsky favorite Larissa Diadkova, whose Filippyena in 2017 sounded like she should consider retirement, reappeared quite refreshed vocally.

Ain Anger, who stood out as Pimen in Boris Godunov last fall failed to score in Gremin’s beautiful aria. The bottom of his bass was full and secure but ugly strain took over as the voice ascended. Rather than indulge in the usual “old man” mannerisms, Tony Stevenson instead strongly—and suavely—delivered Triquet’s French couplets, while much-in-the-news young Ukrainian bass-baritone Vladyslav Buialskyi again made quite an impression in his few lines as the Captain.

The Met orchestra has been sounding consistently superb since its February-off, and it again played with verve and polish for James Gaffigan Friday night. The low strings dug into Tchaikovsky’s vivid writing with particular eloquence. Gaffigan’s reading emphasized propulsion sometimes at the expense of repose, but the dance music always exuded a special vivacity.

I imagine subsequent performances may change the dynamic between Pérez and Golovatenko considerably. She will almost certainly become more secure and find greater nuances in what is already a very promising portrayal. Someone attending the sixth performance on April 14 may likely have a much different experience than I, but I’m grateful that on March 25 I discovered a new to look at one of my favorite operas.