In San Francisco Opera’s new Così fan tutte, the elements that most visibly read as "American" were a penchant for slapstick humor, overcooked blocking, and an abundance of cartoonish period costumes that hobbled the opera’s first act. 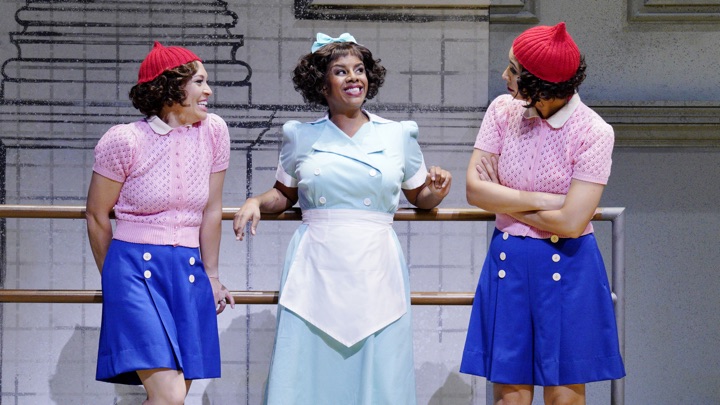 In the fall of 2019, the Canadian director Michael Cavanagh launched the San Francisco Opera’s new “American” Da Ponte Trilogy with the intention of channeling America’s shared experiences and destiny built on a continuum of Mozart and Da Ponte’s operas.

The central through-line that unifies this project is the setting of a “Great American House”, transformed from the post-revolutionary mansion encountered in Figaro into this new Così fan tutte’s opulent, pre-World War II era country club.

While America’s story is replete with sociopolitical inspiration for this ambitious concept, it’s puzzling that Cavanagh chooses a repurposable mansion as the locus for driving Mozart’s fundamentally character-oriented dramas. Furthermore, this project’s American thesis feels incidental when the dramaturgy rarely interposes the librettos’ riches with interesting movements in the country’s history.

Indeed, in San Francisco Opera’s new Così, the elements that most visibly read as “American” were a penchant for slapstick humor, overcooked blocking and an abundance of cartoonish period costumes that hobbled the opera’s first act.

Cavanagh’s retelling sets the opera in the Wolfbridge Country Club, where Don Alfonso presides over the activities as general manager, the quartet of lovers are well-to-do patrons, and Despina is a staff member who attends to the women. 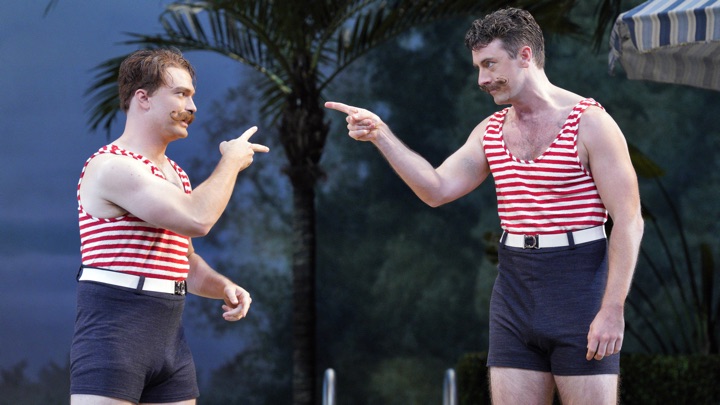 Chronologically, the narrative is framed during the late Depression-era years immediately preceding America’s entry into World War II, although the tension and gravity of those circumstances are never made apparent. In fact, apart from the satisfying directorial twist that redeems the end of the opera, this is a largely traditional Così wherein the Americanized setting barely engages Da Ponte’s discourse on romance and human relationships.

The opera begins pleasantly enough with Alfonso goading Ferrando and Guglielmo into sparring (and physically fencing) in the club’s locker room about their lovers’ fidelity. After the introduction of Fiordiligi and Dorabella in “Ah guarda, sorella,” the first act’s comedic ensembles devolve into cartoonish farce where the sisters’ frenetic mannerisms (for example: when the sisters are saying goodbye to their lovers in act one, Dorabella throws herself on the floor and clutches desperately at Ferrando’s feet before having her breakdown in “Smanie implacabili”, ruining the buildup to the aria) and the disguised men’s oafish antics bring to mind a support group for histrionic personality disorder rather than a genteel upper class country club.

Instead of trusting the libretto’s witty, poetic humor, Cavanagh relies on slapstick and overseasons the recitatives for cheap laughs—an approach that detaches the spectator from the characters’ emotional arc.

Relief fortunately came in the level-headed portrayals of Don Alfonso and Despina, who managed this emotionally overwrought enterprise as bedrocks of sanity.  In spite of the commotion, Ben Bliss created a welcome moment of repose and stillness when he performed the loveliest “Un’ aura amorosa.”

In the opera’s final scenes, Cavanagh’s production also gives audiences a satisfying resolution to the ruse and the lovers’ relationships—a moment that finally made creative use of the era’s more liberated sensibilities. 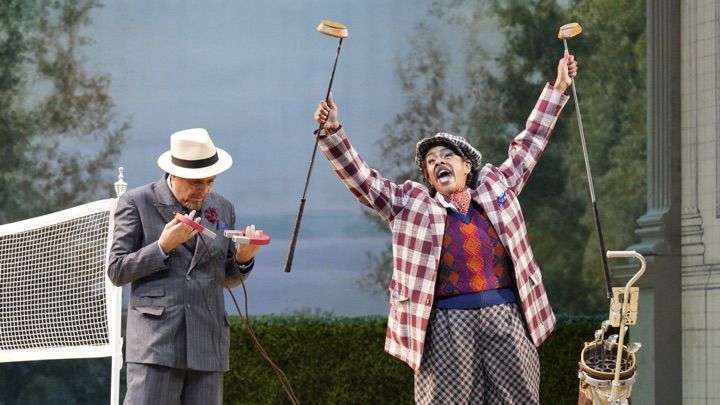 San Francisco Opera assembled a credible cast of singers to enliven Mozart’s ensembles, with notable mention going to Ferruccio Furlanetto and Nicole Heaston for their winning portrayals of the puppet masters.

Furlanetto exhibited his decades of mastering Mozart’s idiom as a Don Alfonso who balanced cynicism and darkness with his character’s wiser, gentler half. If his gravely bass was not as fleet or fluid in dispensing the role’s miles of recitative, he invested much meaning and wisdom into his lines, most notably in an intelligently shaped “Tutti accusan le donne.”

Heaston’s jewel-toned Despina was easily the smartest character in the room, and her genuinely hilarious portrayal brimmed with charisma and personality without resorting to strident vocal antics.

Bliss’s Ferrando is a standout, brandishing a clear, honeyed tenor that negotiated Mozart’s passages with fluency and variety of expression. He memorably imparted ardor and bliss during his great first paean to love and his second act duet with Fiordiligi. With a Ferrando of this calibre, it would have been welcome to include the tenor’s often cut aria “Ah, lo veggio” to the second act.

John Brancy as Guglielmo was more subdued in both volume and expression, but rose to the occasion in his rendition of the original Act 1 bass aria “Rivolgete a lui lo sguardo,” which here replaces the more familiar “Noi siate ritrosi.”

As the sisters Fiordiligi and Dorabella, Nicole Cabell and Irene Roberts initially radiated less vocal presence and dramatic ease compared to their lovers.  While both singers beautifully blended their lines in the opera’s ensembles, their solos didn’t emerge with as much individuality.

Cabell’s middle to lower register appeared challenged by “Come scoglio’s” leaps, runs, and strette, but created a more sympathetic impression with Fiordiligi’s “Per pietà ben mio perdona.”” Like her sister, Roberts too encountered expressive limitations with her upper third, but sang an exuberant “E amore un ladroncello” in act two.

Henrik Nanasi led the San Francisco Opera Orchestra in an energetic reading of Così fan tutte that balanced the libretto’s comic and more serious aspects while giving ample space for the recitatives to bloom.

In his interpretation of the score, Nanasi took a happy medium between the measured tempi familiar from Karl Böhm’s traditional interpretation while adopting an exhilarating pace in the score’s tuttis.  Most importantly, he sensitively accompanied the singers and guided his fortepiano and wind section’s colors to shape the score’s dramatic arc.

Così fan tutte receives four more performances through December 3, 2021.  The San Francisco’s 2021-2022 season will then resume in the summer with the final installation of Cavanagh’s Da Ponte Trilogy (Don Giovanni) and a revival of Bright Sheng’s Dream of the Red Chamber.