Turning over an old leaf

Is there any opera that can take more of a beating while still making an impact than Eugene Onegin?

When you think about it, is there any opera that can take more of a beating while still making an impact, or, for that matter, a point, than Eugene Onegin?

A look at some milestone performances seem to indicate so: it was premiered by conservatory students, had early European performances conducted by Mahler, and received its first United States performances, in Italian, with Giuseppe De Luca and Claudia Muzio as Onegin and Tatiana.

From regie to recital hall, kulaks to communism, Onegin’s cool and simplistic appeal tests and challenges the material time and time again – no two results seem the same, no singular performance able to highlight all the multitudes contained in Tchaikovsky’s music and Pushkin’s verse.

Originating at the Met in 1997 and unfolding sans-set and avec-feuilles, Carsen’s slavish commitment to a minimalist, stylized aesthetic but vivid, emotional, personenregie draws the many constituent themes of Tchaikovsky’s opera – love, youth, friendship, violence, community, conflict between country and city, written word vs. spoken word – into an attractive, accessible thesis that engages both the work and the audience with frankness and respect.

When the Big House transitioned to Fiona Shaw’s thematically similar but altogether clunkier production to occasion Netrebko’s NY debut as Tatiana in 2013, it only highlighted the achievement of Carsen’s interpretation.

The production looks as good on the Kennedy Center’s Opera House stage as it did at the Met, though the performances contained (with “contained” being the operative word) within seldom match its bristling elegance.

WNO here fielded a pair of US-debuting Russian leads as Onegin and Tatiana, and though not without chemistry, they hardly seemed more than simpatico.

Anna Nechaeva fared somewhat better as an earthy, earnest, and even-tempered Tatiana. She bloomed from ingénue to society dame with a grainy if indistinct soprano, though her singing seldom soared beyond the confines of Michael Levine’s white box. 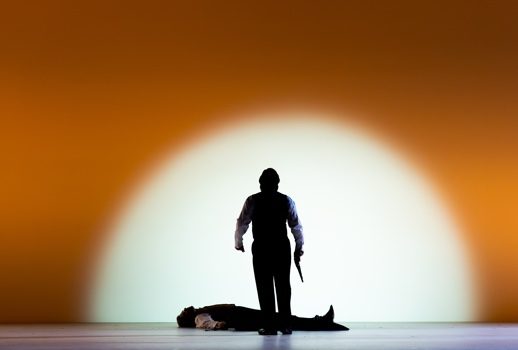 Her very capable Letter Scene never quite caught fire and the reveling in the leaves that accompanies it, albeit a big directorial ask, looked out of place for this aloof but good-natured country girl.

But a Tatiana is nothing without her Onegin, and Igor Golovatenko’s able if not swoon-inducing Onegin didn’t seem like much to write home (or to him) about.

A high-set baritone implied leaner elegance over enigmatic, sophisticated authority, but his singing remained mostly unvaried, without much charm or mystique, throughout the night and his acting was pretty rote.

And even the evening’s most engaged moments, including a well-sung Act I sermon but especially during the feverish final duet, he and his colleagues were swallowed by Robert Trevino’s lackluster, unbalanced conducting.

Distorting the delicately moody orchestrations of the score and deadening the wonderful choruses and dance music (unchoreographed here, and the production’s only major flaw, as far as I’m concerned), it was an unwieldy and inelegant reading.

Slow tempi brought the evening to nearly 3.5 hours, and while this isn’t uncommon for an Onegin, I really wish it were as I find the overblown approach excessive, listlessly overindulgent, and dramatically limp.

In Lensky, Alexey Dolgov has found a role perfect for his generous, unique voice. A focused, nasal tone gives the dreamy poet a charming nerdiness, but under the slightest pressure his timbre strengthens with a robust sophistication.

His Act II aria, emitted with steadily growing ardor, was the evening’s musical highlight. Conversely, Lindsay Ammanwas a surprisingly cold Olga, her mezzo struggling to make much of an impact next to Dolgov’s colorful tenor.

Elena Zaremba’s Madame Larina was grandiose in gesture if not always in voice and Victoria Livengood stole every scene she was in, exuding wisdom and warmth, as Tatiana’s nurse, Filippyevna. In fact, the short duet in which Tatiana dispatches Filippyevna to convey her just-written letter to Onegin seemed like the real Letter Scene.

As each audience member exited with a “Billington Rose,” a curious party favor provided by DC matron and Russian cultural supporter Susan Carmel in honor of former Librarian of Congress, the recently-deceased James Billington, “refreshingly dignified” seemed to be WNO’s desired takeaway for audiences in mounting this Russian classic in such a distinguished staging.

Musical blips aside, with Carsen at the helm, this was a goal they certainly achieved.