It's nice to see Sony Classical backing a serious operatic soprano and not some crossover refugee from Britain’s Got Talent or another syrupy Christmas album from the world’s reigning Heldentenor. 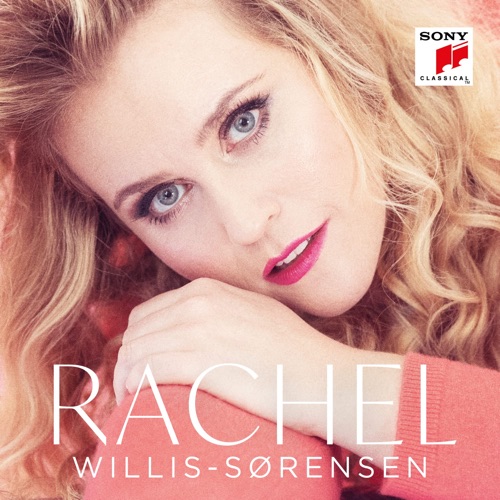 The recording debut of a new talent is exciting for a number of reasons. Often it is that first album that gets mythologized down through the years. Dame Joan’s The Art of the Prima Donna, Leontyne’s “Blue” album and Presenting Montserrat Caballé are all hallowed and revered to a degree for providing that very first taste. They became part of our shared experience in diva worship and fandom even to those of us who were born well after their release.

The white smoke just puffed out of the chimney at Sony Classical with the release of the eponymously named Rachel Willis-Sørensen. So gather r’ound and let’s dig in.

Ms. Willis-Sørensen won the Met National Council in 2010 at the tender age of 26 and then debuted in the house as the Nozze Countess just four years later (impressive and the audio from a 2017 performance can be found on the Met on Demand app.)

That same year she won first prize in the Operalia competition. She has since established the career internationale, singing absolutely everything absolutely everywhere. In 2018 she even pulled off the hat trick of learning Hélène in Les vêpres siciliennes in a week for her Munich debut. Singing Her first Verdi role and her first French opera simultaneously made this essentially a career trifecta. So let the mythologizing begin!

Her staged roles include (in no particular order) Mozart’s Donna Anna, Vitellia, Fiordiligi,and Elettra; Strauss’s Marschallin and Ariadne; Wagner’s Eva, Elsa, and Gurtrune; Britten’s Governess & Ellen Orford; Gonoud’s Marguerite; Puccini’s Mimì; Beethoven’s Leonore; the Trovatore Leonora of Verdi and Dvorák’s Little Mermaid. Plus she dabbles in the Fleidermaus Rosalinde and Lehar’s Widow because it can’t be murder and mayhem all the time and she pretty.

With such a tremendous pool of characters and composers to choose from I was a mite disappointed with the chosen repertoire for this compilation. Not that she doesn’t put her best foot forward but I think I’ve purchased this shoe before. I just can’t recall exactly which soprano was wearing it.

She has sung all of the roles included herein onstage so I applaud the fact that we’re not getting any debuts but it is relentlessly standard repertoire with one exception. So she’s already got one strike against her in my book in addition to the one in her last name (special symbols on my keyboard… ugh!)

Still it’s nice to see Sony Classical backing a serious operatic soprano and not some crossover refugee from Britain’s Got Talent or another syrupy Christmas album from the world’s reigning Heldentenor.

To almost no one’s surprise, Ms. Willis-Sørensen opens with Violetta’s Act I scena from Traviata. In her opening recitativo leading to the cavatina she goes pitch adjacent for a split second when she’s landing the cadenza. Immediately she self-corrects and it never happens again.

This, beloveds, is a big, rich, juicy, round voice. No sharp edges or stridency of any kind. The technique is immaculate. The balance of tone and the chiaroscuro are borderline perfection. The sheer height of the resonance on the high notes is gorgeous. It’s also an eensy-bit slow moving like big voices can be. They require a lot of air.

Luckily her conductor, Frédéric Chaslin who’s leading the Orchestra del Teatro Carlo Felice di Genova, understands this and allows her plenty of breathing room between phrases. Perhaps to the detriment of the tempo and momentum at times but I understand the necessity to accommodate.

One go at the cavatina and then two verses of the cabaletta with, you guessed it, an absolutely voluptuous penultimate E-flat in alt. It’s almost too big for the Sony engineers to capture! The coloratura technique is rock solid and very fine but she does sit out the stretta. It’s the kind of voice where you’re never worried about consummation of the composer’s demands and delighted at how both full and agile the production is.

She also gets a tenor, Giovanni Sala, who’s surprisingly luscious himself, to play off of. I’m sorry to say her, “Ah!” at first hearing his voice off-stage left little impression on me. An opportunity lost! That said, she does insert a number of expressive sighs and laughs at key moments throughout the recital, as well as grace notes, appoggiature and tiny trills almost anywhere she can get away with them stylistically that show she’s striving for a naturalism in her performance that’s unique to her.

She gives us a go at Verdi’s “Ami, le coeur d’Hélène” from the aforementioned Vêpres and it’s certainly distinguished, with an excellent cadenza (which she says in the liner notes is an homage to La Callas herself), and nice to hear it en français. I would have preferred the Boléro frankly cause we all know it’s more fun.

Then we get the juicy bits from Mozart’s Donna Anna.  Mr. Sala contributies a shocked Don Ottavio in the lead up to “Or sai chi l’onore and then the whole of “Non mi dir.” She sprinkles each liberally with enough appoggiature, grace notes and fioratura in the cadenzas to make Richard Bonynge positively swoon. The repeat on “Or sai” is very bravura. It does whet my appetite to actually hear her in this role. It’s big lady, big house Mozart and she has the phrasing and the command.

Next on our dance card is Verdi’s Desdemona getting ready for bed. She’s attended upon by Olivia Kahler whose light soprano makes a lovely counter-balance in conversation. Ms. Willis-Sørensen is on a roll here and I mean that literally. For some odd reason where a simple turned r would be sufficient we get almost all of them fully rrrrolled. It becomes distracting on repetition and perhaps diminishes the otherwise good work she’s doing here. Honestly, it’s the only fault I can find with her Italian on this whole disc. Odd. She’s poised and luscious in the prayer.

We’re up in the garrett on Christmas Eve for a lovely “Si, Mi chiamano Mimi” which is just about all you could want. She’s sweet and conversational and then on, “ma quando vien lo sgelo”, the voice expands out opulently. Gooseflesh!

The next track starts with “O soave fanciulla” which is musically clumsy without the bridge with the bohemians but we have luxury casting with Jonas Kauffmann ,who was her Rodolfo in Munich in 2020. I hate to say he sounds a bit long in the tooth here next to this nubile Mimi. Both manage a nice mezzo-forte on the C at the duet’s conclusion which inadvertently proves why Puccini wanted it sung offstage and the tenor to take the lower harmonic A.

Next Rusalka’s “Song to the Moon” gets a lovely rendering full of contrast and a high degree of polish. If you’ve noticed a general lack of drama in all of these selections I applaud your perception. We’re practically to the end of the album and there’s only been one death-oath sworn out. I’m not looking for blood on the wall mind you but this is a big lyric-spinto voice. Let’s take it for a spin and see what it can do.

“Tacea la notte” from Act I, Scene II of Il trovatore comes next, and we have Olivia Kahler doing balcony duty as Ms. Willis-Sørensen scans the cloudy night for her Manrico. Verdi’s slow ascending phrases in the opening hold no terrors for the soprano and all of the later coloraturas are dispatched with optimal grace and flexibility.

She closes out the recital with Lehar’s “Vilja-Lied” which is, understandably from her  gossamer interpretation, an encore piece.

Ms. Willis-Sørensen contributes her own charming and earnest liner notes in the enclosed relentlessly pink booklet which does include texts and English translations.

In my research leading up to this piece I watched an episode where she guested on  Screaming Divas” hosted by Sondra Radvanovsky and Keri Alkema on YouTube.  I cannot recommend this highly enough for anyone interested in the vagaries of trying to make a career or the insight into what that process is actually like.

Not only was Ms. Willis-Sørensen completely candid about why she had to leave her first management team (repertoire) but also the effects of Regietheater productions on the singers themselves. Ms. Radvanovsky even opens up about the experience of the recent Paris AIda where her role was essentially played by a puppet and what that felt like as a singing/actor (p.s. no bueno por Sondra).

From this conversation it becomes apparent that the repertoire on this CD is a victory of sorts over past management that wasn’t listening to our soprano about the direction she wanted to take her voice in. She felt she was being pushed into Wagner roles too soon (which she’s certainly capable of (and I’d KILL to hear her Sieglinde)) but she’s interested in more Verdi and bel canto including Anna Bolena. Pardon me while I pause in grace and gratitude and offer a prayer for her continued success.

This is literally a once in a generation voice. Jaded old me dismissed this recording at first because who hasn’t sung this repertoire just as beautifully? But who’s singing it this beautifully now?