Mr. Wilson’s production concept, according to his liner notes, has more to do with Paris at the time of the premiere and a "world of memory" than it does with the storytelling of civil war in medieval Spain. 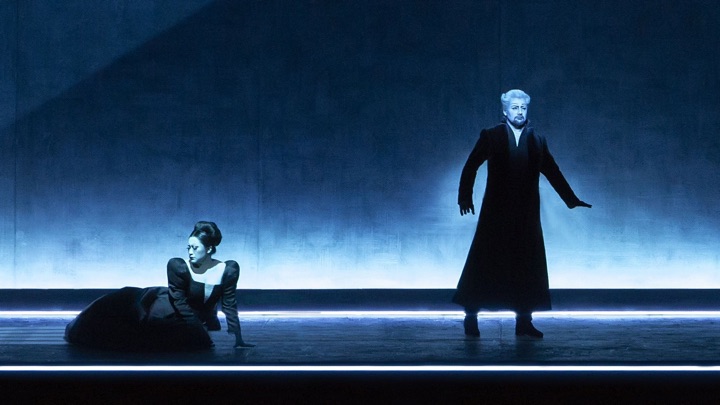 Opera fans go on and on ad nauseam about how the plot of Giuseppe Verdi’s Il trovatore is completely incomprehensible to nearly any audience. Even Gilbert and Sullivan, enjoying their first successes 20 years after the opera’s premiere, made in-jokes based on the contrivances and conveniences of the creaky plot of Antonio García Gutiérrez’ Spanish melodrama.

Because nearly all of the “action” of the first half of the opera is memory you need singers who can not only handle the muscular bel canto style of one of the composer’s most vocally demanding works but singing-actors who can tell stories. As we jaded opera connoisseurs know these two things rarely go hand in hand and most especially in Trovatore. So we usually end up (hopefully) with a grand vocal pageant. Yet the drama is there in the text. So if you’re paying attention to the words Trovatore can be a particularly sensational operatic experience as well as a vocal tour de force.

Ah, and then came Paris. Because of Verdi’s growing popularity he was convinced by the Paris Opera to revise and reconstruct Il Lombardi into his first French opera Jérusalem. His relationship with the city, and the company, remained strong throughout his career. Writing two works, Les vêpres siciliennes and Don Carlos, specifically for L’Opera and adapting and or revising previous works. The version we hear today of Verdi’s Macbeth is most commonly that of Paris 1865 (though it was not considered a success by the critics) and the composer is said to have favored his Otello in French (and rewrote the great Act III concertato for those performances).

So it’s a bit of serendipity that we get two major video releases of Verdi’s baby-burner within weeks of each other both in the Italian and then as Le Trouvère in the composer’s extensive French revision. The first being from our friends at Unitel with Franco Zeffirelli’s production at the Arena di Verona and the second released by Dynamic of the Festival Verdi Parma performance directed by Robert Wilson. I can’t imagine two more wildly disparate creative theatrical minds having a go at the same work and they’re both interesting in exactly the ways you might imagine and some you may not.

Let’s start with the curate’s egg. Verdi extensively reworked five parts of the score and it’s astonishing how apparent it is when you’re listening with a seasoned ear accustomed to the Italian version. These sections are:

An addition to the score is the de rigueur ballet for Act III, which became a divertissement by the colorful bohémiennes.

Cadenzas to almost every major aria were re-thought as well and I find the effect refreshing. Those of us familiar with Richard Bonynge’s Decca recording (one of my favorites…shoot me) have already heard a tiny taste of Verdi’s reworking of the stretta to Lénore’s Act I cabaletta but the full revision is exciting and far more modern sounding than the simple bel canto scales of the original. So is the new finale of Act III scene I where Azucena thunders all the way up to High C before she’s hauled off to prison.

A very fine cast of singers are put through their paces here led by the very clean conducting of Roberto Abbado and the Orchestra e Coro del Teatro Comunale di Bologna (Don’t ask me how they all ended up 60 miles away in Parma for this festival?) The maestro leads an absolutely gripping musical performance full of nuance and energy that never lets up on the tension save for in the very jaunty (and here sadly problematic) ballet.

But first I must tip my chapeau to Mme. Jocelyn Dienst-Bladin the coach-accompanist who served as French language coach on this production. Without a single native French singer in the cast, I was very impressed at everyone’s work here and I’m sure many of her charges already knew their roles in Italian. I’m certain it was doubly hard since not only the emphasis of the words to note values change in the arias but in most cases the accompanied recit. is vastly different. Even if your French is minimal it does make you hear the libretto with new ears which is wonderful.

Mr. Wilson’s production concept, according to his liner notes, has more to do with Paris at the time of the premiere and a “world of memory” than it does with the storytelling of civil war in medieval Spain. Hence we have shadow characters co-habitating the stage who have nothing to do with the story. An old man (who looks a little like Verdi) sits on a chair through some of the chorus scenes while a magical antique water pump glides on while Azucena sings “La flamme brille” and is circled by a mother and her two young daughters adding nothing to the story.

Giuseppe Gipali sings a very strong Manrique and the tenor’s voice has a good bit of steel in it and a nice masculine sound. His “Ô toi! Mon seul espoir” before the wedding is long breathed and he’s rousing in the cabaletta with the full repeat and up to pitch. Thanks to Mr. Wilson he does go through the performance looking perpetually surprised since he has two pairs of eyebrows painted on his forehead.

The Léonore is Roberta Mantegna and she is in her early 30’s and has only been singing principal roles for the past five years. Her career so far has been based in Italy and she’s already made her La Scala debut in Bellini’s Il Pirata. She has a full lyric-spinto voice with an even scale and a very healthy bloom above the staff. Her passage work in all of the demanding fioratura Verdi wrote was exceptionally clean.

Although she can’t take her eyes off the Maestro in Act IV’s “Brise d’amour fidèle” she caps the duet with Le Comte de Luna of Franco Vassallo with a crescendo so powerful I think my hair was displaced momentarily. Costumier Julia Von Leliwa gives Ms Mantegna a ball gown with full sleeves and a faux-plunging decolletage to wear, which along with Mr. Wilson’s movements, gives her the grand line onstage. Whilst I’m cautiously optimistic (she’s already sung Norma…eek!) This is most certainly a voice to watch out for.

Mr. Vassallo obviously knows his way around Le Comte and his performance is strong and full of nuance. It’s a big, rich, Italian baritone sound that’s meant for Verdi and he has a noble demeanor which matches his black frock coat and white wig with discreet ponytail. Oh, and he’s got the double eyebrows too, which is I suppose how you know that he and Manrique are brothers.

But my absolute favorite of this bunch is the Azucena of Nino Surguladze. She’s been done up in a floor length black gown with the most fearsome shoulders you can imagine and a beaded headdress wreathed in the front with black roses and Onyx horns sticking straight up about a foot out of the top of her head. She’s Disney’s Maleficent to the teeth and it works. It’s a real Azucena voice and her French is the most potent I think of everyone in the cast. Also because she’s been directed to stare straight ahead all evening long she looks particularly demented.

The only weak link is the Fernand of Marco Spotti who just seems a bit long in the tooth for the demands of the opening scene. Like many a bass before him he lets the orchestra do the fioratura for him and hopes no one will notice. He sings well for the rest of the evening but that crucial first scene makes you apprehensive for the rest.

With nearly everyone in black the only way you can tell people apart in silhouette is by their headgear. So the gypsies have matador toppers that look like water buffalo horns while Pascal hats abound for the nobles and the militairé.

I can forgive and overlook the more eccentric bits of Mr. WIlson’s staging, and it is atmospheric in his usual way, but the ballet is an enormous fail. I couldn’t even honestly call it choreographed and it’s just a bunch of athletes shadow boxing each other in groups for 20-mins. Absolutely pointless and does nothing to even slightly enhance Verdi’s very enjoyable music or the story.

Picture on the Blu-ray I watched was crisp and exceptionally clear and the DTS 5.1 sound option was especially sharp with excellent texture from the orchestra. Crucial here so you can really enjoy the new sounds coming from the pit.

There’s also a brief tour of the Teatro Farnese in Parma where the production was staged, which is a restored Renaissance theater. If I’m not mistaken it was also used for the opening scene of the Jean Pierre-Ponnelle film of Rigoletto. Video Director Tiziano Mancini does an excellent job of making sure we don’t miss a thing which means a lot of single point perspective shots of the entire stage. Almost no angles. I do have to call out the laziest subtitle writer I’ve ever encountered for using “…etc.” at the repeat of Léonore’s Act I caballetta instead of just leaving the screen blank. Mon Dieu!