On the first viewing of this Idomeneo, with a cast clad mostly in military khaki green set against a green sky, the eye starts to tire from the dullness of the surroundings. 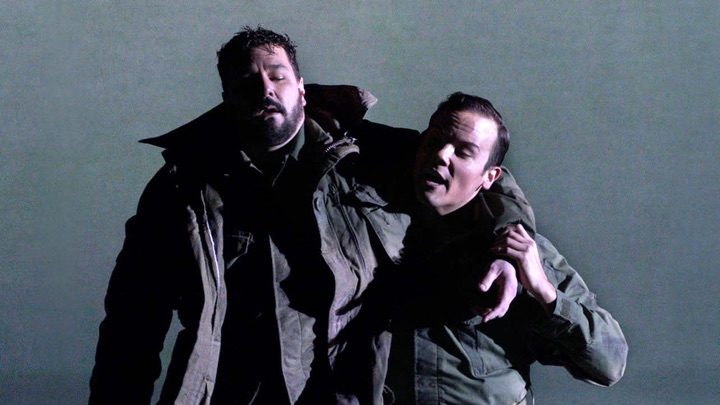 I’m here to say that I adore Wolfgang Amadeus Mozart’s Idomeneo above all of his other works. Yes it’s longer than it should be. It also had a messy compositional history and comes in two sizes; Munich and Vienna (1781 & 1786 respectively). It was almost completely neglected in the composer’s lifetime. What he tried to accomplish with it was groundbreaking: an opera seria where musical pieces flowed one into the other in a near unbroken stream. Ludwig von Köchel’s catalogue of Mozart’s works (that ‘K’ number after the title) puts it at numero 366. He was 24 years old.

To borrow a line from the great Tom Lehrer, it’s a sober thought that by the time Mozart reached my age he’d been dead for 30 years.

The first Idomemeo was the Tenor Anton Raaff who was 67 at the time of the premiere. Consequently the tenor’s Act II showstopper, “Fuor del Mar”, exists in two versions: the wildly florid original Mozart conceived before casting and the version simplified for Mr. Raaff’s waning gifts.

Idamante was a soprano castrato of limited facility named Vincenzo del Prato. Apparently the two of them were such horrible actors Mozart ended up cutting miles of the recitative that they were completely ineffective in. The inadequacies of the original cast also required the removal of quite a few numbers we’re used to hearing today. One of the hardest for the composer was the quartet, “Andrò ramingo e solo” in Act III because del Prato especially, and the rest of the cast, objected to its unusual musical style so strenuously.

Even Elettra’s “D’Oreste, d’Ajace” was cut and replaced by the tortured recitativo that we now usually hear proceeding it. This is apparently bad Mozart form and was frowned upon by Mr. Andrew Porter, god of opera critics. Yet I care not, for I love them both together.

The Vienna performance allowed for the restoration of some music but the rewriting of the role of Idamante for tenor which I’m sorry to say I’ve never enjoyed. With that crucial change we then have three leading tenors (when you add the role of Arbace, counsel to Idomeneo) and it can become vocally monotonous. Not unlike a Der Rosenkavalier with three sopranos. Generally the modern practice is to assign a mezzo-soprano as the young Idamante and use the castrato line which I like as a nice nod to the baroque tradition.

Also In Vienna Arbace lost his only two arias which is a shame because I enjoy “Se il tuo duol” in Act II. Oh and there’s a bit of ballet because of the au courant French influence that no one ever stages and is only sometimes relegated to an appendix on recordings. It can be a musical hodgepodge not unlike so many other operatic works and you just never know what you’re going to get most of the time. I always proceed with caution and fingers crossed.

Our friends at Opus Arte have just released a video performance from Madrid’s Teatro Real directed by Robert Carsen in a production shared by the Canadian Opera Company, Rome Opera, and the Royal Danish Opera. Mr. Carsen also co-designed the set and costumes with Luis F. Carvahlo and shares design credits on the lighting plot with Peter van Praet.

Since the plot of the opera starts with the themes of war and displacement Mr. Carsen made the understandable decision to update his production to our own time. The curtain opens on a Trojan refugee camp in war torn Crete with a vast chain link fence bisecting the back of the stage. Mr. Carsen is a master at constructing arresting stage pictures and here he works within seemingly very modest means to an end. The entire performance takes place on this desolate beach that spans the enormous width of the Teatro Real’s stage. A vast clouded sky and sea, created by video designer Will Duke (which only intermittently betrays its seams), are the only backdrop.

I have nothing but respect for Mr. Carsen and I have enjoyed many of his productions that I’ve seen on video including his classic stagings of Eugene Onegin, Rusalka, and Mefistofele. Yet, on first viewing, with a cast clad mostly in military khaki green set against a green sky the eye starts to tire from the dullness of the surroundings. The only way to tell the two sopranos apart in long shots at times was that one was wearing a down jacket (Ilia) and the other is in leather (Elettra).

Still, the great span of music in Act I starting with Ilia’s moving, ‘Padre, germani, addio!’ takes on a whole new significance with the Trojan princess flanked by dozens of refugees. Anett Fritsch brings a youthful timbre and winning grace to her role. She dispatches her three arias, one in each act, well and is allowed tasteful ornaments in the da capo. Still there was more straight tone than I’d like honestly. Nor were there any moments for me when time stood still. A good performance but not a great one.

David Portillo’s Idamante is a different animal and I’m sorry that I’m disinclined to enjoy his performance from the outset. He suffers from the same dilemma almost all tenors have in Mozart’s music which is that the writing sits squarely in the least comfortable spot of their range. I blame this more on modern settings of pitch than anything else. He gives an earnest performance and is certainly believable as the young son of the king. He sings cleanly and his tone is mostly sweet but can turn hectoring, especially in the recitative. I’ve never heard a tenor make a good impression in Act I’s “Non ho colpa” and he sadly proves no exception. It just sits better for a mezzo.

Eleonora Buratto as Elettra, daughter of Agamemnon, seems to be having herself a time. She charges across the beach at her first entrance, done up in military dress uniform and sensible heels, ready to take charge. As the only Italian in the cast she’s also got a leg up on everyone else in the recits. She’s got good wind and It’s a nice size voice that handles well in the fioratura as well as the exacting scale work of “Idol mio.” She manages her last act scena without sounding comical in the downward staccatos which is impressive and gets a delicious bit of stage business at her finale.

Eric Cutler takes the leading role here and he has an especially commanding stage presence that makes him ideal for this staging. Tall and strapping, he looks surprisingly natural in all the military garb and moves well. His full lyric tenor tends to coarsen under pressure. While his opening, “Vedrommi intorno”, is cantabile the cabaletta following is choppy and his tone lacks point. He wisely chooses the simplified version of “Fuor del mar” and makes it through to the other side safely. He has the metal to make this part his own and he grows more comfortable as the evening progresses. There’s just a final bit of nuance and polish that seems lacking.

It’s a shame that Ivor Bolton. who is also Music Director of the Teatro Real, chose the Vienna revision rather than using the best parts of the Munich original. He does get fantastic playing from the Teatro Real Orchestra. He and the orchestra keep the performance moving forward and the strings play with a vivid bite and inciviness.

Appoggiaturas are used sparingly and everyone is allowed a graceful decoration in their repeats here and there which pleases the ear. Sadly, not a single member of the cast has an actual trill though attempts are made.

It’s hard to tell how large a group the Teatro Real Chorus is because I think they are almost equaled in number by supernumeraries in this production between the army and the refugees. Idomeneo has more and greater choral writing than any of Mozart’s stage works and the chorus here is really the star of the show. They’re lively and attentive to both rhythm and dynamics especially in the opening,”Godiam la pace”.   The stormy “Pieta! Numi, Pieta!” cleanly differentiates between the two groups offstage while the final “Scenda amor, scenda Imeneo” proves a profoundly moving moment of peace and reconciliation both musically and in the context of the staging.

Mr. Carsen’s staging does have it’s own bag of tricks and you don’t have to have the gifts of Cassandra to devine what’s coming because of the milieu. The military tents, regalia, and weapons. When Elettra readies to leave Crete soldiers carry a tricked-out zodiac towards the shore behind her. The curtain rises on Act III with Ilia strikingly lying in a sea of orange life vests. He also does an especially good job with staging the voice of Neptune which I won’t spoil. Still for an opera seria that’s prone to static he does keep everyone moving intelligently.

Opus Arte do their usual excellent job with sound and picture. Clear and crisp. It is a literal disgrace however that the accompanying booklet doesn’t list the musical numbers. The on-screen menu does along with the scene numbers. Recitativo, Aria, Coro, and so on but not which character is performing. I know the titles of most of the arias and ensembles but I wouldn’t expect the same of the average opera fan. It’s not Tosca and people need a little guidance to say nothing of the responsibility of publishing something and cataloguing it properly.

I’ve watched all of this once and most of the juicy bits two or three times now. I was baptised on the Ponnelle production from the Met back in the day when you used to tune into your local classical music radio station so you could hear the telecast in stereo. It was like magic. I still love that production worts and all. For a modern staging with a solid, if not starry, cast this is a good addition to your library.