Mascagni’s Cavalleria Rusticana has always been a particular favorite, although I’ve only seen it staged once (and that by an amateur company the details of which I share spare you all, save to note that dinner was served during the performance.) 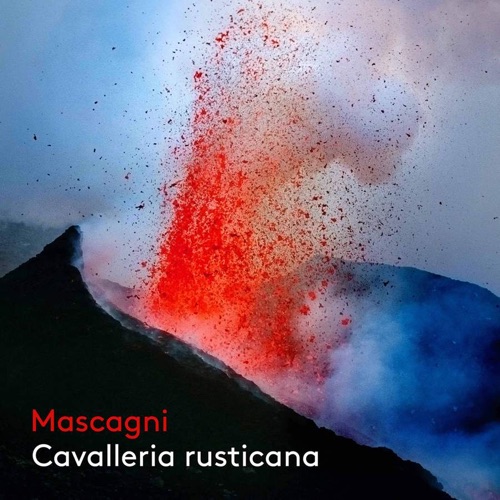 Oh single CD operas, how do I love thee! In my life’s quest to own every single recording of the operas I love (and some I only flirt with) I’m especially fond of those that fit onto a single disc. Your average grand opus spreads itself out over three and even four CD’s, with scholarly appendix added, or just from the sheer languid grandeur of the conducting.

I still remember with horror the price tag on Leonard Bernstein’s Tristan und Isolde on five (count ‘em 5) CD’s where Maestros Bohm and Kleiber had managed to squeeze all that sturm und drang unto a mere three. Consequently I have piles of Bluebeard’s Castle, Oedipus Rex, Puccini’s Trittico (in and out of context) and that venerated verismo two-fer, Cavalleria Rusticana & Pagliacci.

I don’t know if anyone’s noticed but it seems the operatic pendulum has been stuck on the baroque/early music setting for quite some time now, most especially in the recording industry. Box sets of Handel and Vivaldi operas abound like bunnies in a hutch and there’s practically a plague of countertenors. (Met even staged and broadcast Handel’s Agrippina this year. Meanwhile there hasn’t been a new production of La Gioconda at the Met in my lifetime.

Mascagni’s Cavalleria Rusticana has always been a particular favorite, although I’ve only seen it staged once (and that by an amateur company the details of which I share spare you all, save to note that dinner was served during the performance.) It requires substantial orchestral and choral forces to do it justice as well as a tenor and soprano of near titanic vocal, and hopefully dramatic, endowments. The kind of voices that seem thin on the ground lately what with all this straight-tone and trilling going on.

It also boasts a very prestigious recorded pedigree having been performed, conducted, and committed to disc by nearly all of the greatest interpreters of Italian Opera in the 20th century. We even have the composer himself leading a very controversial reading (i.e. slow) with Beniamino Gigli and the Orchestra & Chorus of La Scala on the occasion of the works 50th anniversary. Luckily for us these seemingly rare ingredients have handily been gathered up by our friends at Pentatone for this new release.

Marek Janowski has spent a career dedicated to the performance of Wagner’s operas. He’s recorded two complete Ring cycles the first of which was the premiere recording in digital sound (and first Waküre I ever purchased!) the second more recently with an evident wealth of experience. To find him in sunny Sicily with the Dresdner Philharmonie seems surprising at first and there are times when the orchestra and the MDR Leipzig Radio Choir betray their origins but in the end it adds depth to what is a very well constructed performance.

The first impression is a good one. The sonic stage is wide enough to give the music a natural space unlike some of the aggressive stereo sonics of the 1960’s. The Dresdeners play the prelude schõn and Mr. Janowski eschews the wide dynamics that some conductors force on the listener and chooses instead to draw them in. With the offstage Siciliana we’re introduced to the very promising voice of our Turiddu. American tenor Brian Jagde has a burly, masculine tone, excellent breath, and a top that definitely puts you in mind of some tenors of yore.

Then all hell breaks loose as it should and we get some very vivid bells along with some excellently clean choral work. Mr. Janowski gets a hearty and surprisingly jaunty swing going as the townsfolk assemble for Easter festivities.

The dark strings play that mournful theme heralding the arrival of our Santuzza and beloveds it is on. Melody Moore has just about everything you’d want in this role. It’s a big mama soprano voice that effortlessly dips down into mezzoland without ever compromising its ample, gleaming top. The singing is never less than beautiful, and the voice is absolutely secure and radiantly healthy, but the words mean something as well. Her Santuzza is deeply ashamed and you feel it in her exchanges with the other characters. Most especially with the vinegary Mamma Lucia of Elisabetta Fiorillo. Even after she’s been emboldened in the duet with Turridu and she betrays him to Alfio the burden is still hers. Her “Voi lo sapete” is abundant with feeling and opens and closes almost through tears.

That duet is white hot in context, and the highlight of this recording, and it’s as much due to the incendiary work of both soloists as the leadership of Janowski. Ms. Moore and Mr. Jagde go tusk to tusk in the kind of full-throated singing that raises the gooseflesh on your arms. By the time they start the final repeat of the big theme, “No, no, Turiddu,” their vocal stamina seems almost superhuman. Mr. Janowski keeps a momentum going that, while it expands out for the big moments, never lets things slow to become over grandiose. Ms. Moore also flings out one of the best curses I’ve heard, seemingly horrified at what she’s about to say, and still keeping to the note values without resorting to screams. She caps it with a “Spergiuro!” that thunders on top and ends in the basement.

Lester Lynch is Alfio and he’s got one of those voices that sounds more like bass dressed up as baritone. Yet it is an infamously highlying part and it holds no terrors for him. It’s another meaty voice appropriate for this repertory and he’s particularly strong in his whip-cracking arrival. He and Mr. Jagde also play off each other nicely in their confrontation.

The chorus sings the opening of the “Regina Coeli” like good Dresdeners singing Bach. It’s very clean and there’s no vibrato and I was initially mystified. Then as Maestro Janowski starts layering on each component of the ensemble, and the intensity builds, you start appreciating his experience as a Wagnerian. Ms. Moore is gleaming above the staff and easily dominates the ensemble without apparent need of knob twirling in the control room.

I was a little disappointed that there was no offstage scream in the finale at the announcement of Turridu’s murder. Referencing the score, I discovered it’s not actually written there even though Mascagni himself includes it on his 1940 recording. There are also two spots in the duet, right around that final repeat, where it seems absolutely every conductor has their own mind made up when it comes to timing and I like the choices that Maestro Janowski makes.

Pentatone offers responsible eco-friendly cardboard packaging and I’d expect nothing less. No singers bios are included, however, which is an odd volte face for them. I discovered during my research that this is only Mr. Jagde’s second recording and he’s also on a recent video release of Korngold’s Das Wunder der Heliane that I’ve been meaning to watch forever.

The recording was made Direct Stream Digital and released on SA-CD and the recorded sound is as expansive and clear as we’ve come to expect from this label. It favors the soloists and orchestra over the chorus and is stunningly realistic to the concert hall experience.

I do have to mention the booklet essay by Steffan Georgi. It goes a long way around to draw comparisons from Cavalleria to Wagner, including parallels between Santuzza to Elizabeth in Lohengrin, and linking the early interchange between Mama Lucia questioning Turridu to that of Fricka confronting Wotan. My left eyebrow drew higher on my forehead with each successive paragraph. I can only assume it was better before it was translated from the original German.

A lovely cover photo depicts what I can only assume is Mount Etna having a good blast, and for this recording it’s more than fitting.