After the break the ladies stepped up their game so much that it elevated the night into legendary status: definitely one for the books! 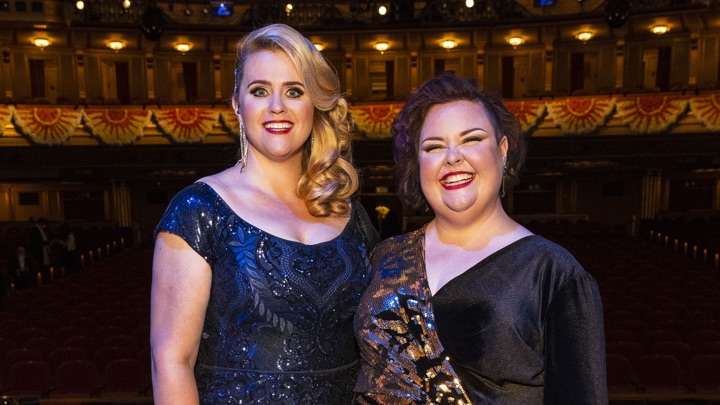 Last Friday, San Francisco Opera officially opened their 99th season with a one night only concert billed “Live and In Concert: The Homecoming” on stage of War Memorial Opera House. In a way, this joyful concert replaced the traditionally glamorous opening night gala that usually happened around the same time, even if the company had begun the season with an excellent Tosca three weeks prior.

The well-attended concert also marked the return of the popular (and free) “Opera at the Ballpark”, as it was broadcasted live simultaneously at Oracle Park, home of the San Francisco Giants. Although it was smaller in scale than previous years, nevertheless it signified that Arts are alive and well at the City by the Bay, even with the threat of Delta variant is still looming large.

The Homecoming was truly a glorious celebration of women in opera, as it reunited the three stars of summer 2019 extraordinary Rusalka () … soprano Rachel Willis-Sørensen (who made the titular role debut), mezzo-soprano Jamie Barton, and conductor Eun San Kim, whose triumphant house debut led to her appointment as San Francisco Opera’s fourth music director. The great chemistry (not to mention artistry) among the three during that Rusalka was clearly still very fresh in everyone’s mind—as fondly remembered during San Francisco Opera Board of Directors Chairman John A. Gunn’s opening speech—hence the inclusion of the Polonaise and the famous aria “Song to the Moon” during this concert was a no-brainer!

Personally, the choice of the title “The Homecoming” was very interesting, as none of the stars are based in Bay Area. Nevertheless, in the illuminating SF Opera’s blog, Willis-Sørensen (in her only US engagement this season) felt it apt for many different reasons:

For me, coming to San Francisco always feels kind of like a return home, even though I didn’t grow up in California. But being from the West Coast, this is the most important opera house in the west, you know? … If I’m not with my children, the second best thing is on a stage. That’s where I belong more than anywhere else.

The audience entering the vast auditorium of War Memorial Opera House was greeted not only with the grand presence of San Francisco Opera Orchestra on stage (first time since Giuseppe Verdi’s Requiem eight years ago) but also with the sight of San Francisco Opera impressive new Concert Shell, comprising 10 individual rolling towers forming a bandshell.

Alongside the refurbishment of the chairs and carpet, the construction of the shell (designed by Ryan O’Steen) began in the early months of the pandemic shutdown and completed some time earlier this year. Not only it was a sight to behold, but its acoustic properties also sounded great as well!

The song selections for this concert, particularly for the duets, were curious, particularly as they pretty much mirrored (except for one) the duet list for the famous Marian Anderson tribute concert by Grace Bumbry and Shirley Verrett, almost exactly 36 years ago to the date.

It is particularly interesting to note that in the blog above, Willis-Sørensen admitted that she had very little experience in the bel canto style, even she was concerned initially with Anna Bolena’s duet. However, she was more than up for the challenge, as she said “I was like, ‘Oh, do I dare?’ But then the more I studied it, the more I was like, ‘No, I have to do it. I love it so much’”. 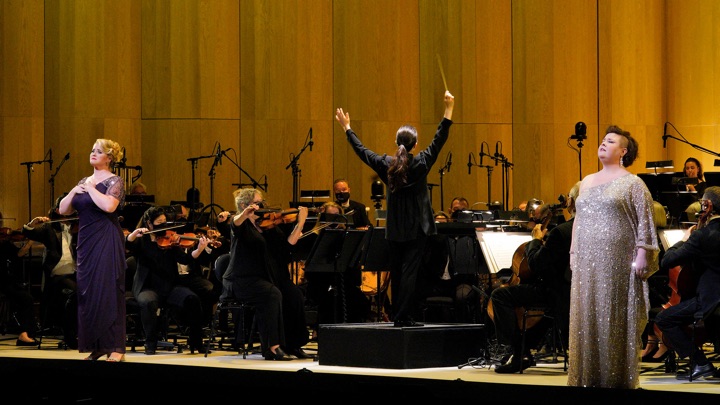 The Homecoming began with a rousing rendition of Franz von Suppé’s popular Light Cavalry Overture, a perfect display to showcase the various sections of the SF Opera Orchestra. Kim took the galloping music in a breakneck pace—almost losing the structure a little bit during the return of the fanfare in the end—but it certainly worked to set the mood of the audience into celebration mode, and they cheered gleefully.

Willis-Sørensen started the night with the well-known Act 1 closing aria from Giuseppe Verdi’s La Traviata, “È strano … Sempre libera”, looking absolutely beautiful in a maroon gown. I was questioning the placement of this complicated aria when I first saw the program, and while Willis-Sørensen sang the song well, she was visibly very cautious in approaching the song, quite ironic for an aria about being “forever free”.

She was much more in her element during the next offering, the famous “Depuis le jour” from Gustave Charpentier’s “roman musical” Louise, throwing delightful pianissimi and elegantly phrased passages effortlessly, totally believable as a young woman madly in love. Kim’s accompaniment was particularly memorable here, transporting the audience to a magical night in Paris.

Sandwiching both arias, Barton gave a glimpse of two portrayals that she performed to great acclaim before, namely Léonor de Guzman in Gaetano Donizetti’s La Favorite (Teatro Real and Houston Grand Opera) and Princess Eboli in Verdi’s Don Carlo (Deutsche Oper Berlin and Washington National Opera). Decked in glittery one-shoulder silver dress with a distinctively funky coiffure, Barton brought her usual fiery intensity and dramatic phrasing for both “O mon Fernand” and “O don fatale”. Especially on the latter, while her voice boomed through the hall with vibrancy and control, unfortunately the top notes proved to be a bit problematic for her that night. Nevertheless, it was job well done, and the appreciative patrons responded accordingly.

The first part ended with the first duet of the night, the confrontation between Anne Boleyn and Jane Seymour from Donizetti’s Anna Bolena. Sang on either side of Kim (whose back was toward the audience the whole time), both Willis-Sørensen and Barton executed the duet flawlessly and their voices blended well together. Any concern on Willis-Sørensen’s part above definitely had completely disappeared and she wholeheartedly embraced Anne Boleyn’s role with its ever-changing emotions throughout the duet. My only slight reservation was that even though both sang without music stand, I was wondering why they didn’t really interact with each other at all, but I got my answers after the break.

While up to the intermission The Homecoming had been a fine performance, after the break the ladies stepped up their game so much that it elevated the night into legendary status: definitely one for the books! It was as if everyone let their hair down and got ready to party.

Both Barton and Willis-Sørensen were much more animated, and they played off each other nicely, aided visually by the striking evening gowns they wore in bold colors (navy blue for Willis-Sørensen, and contrasting black and gold for Barton). The orchestra, too, sounded grander and much more nuanced, every detail was beautifully highlighted without losing track of the bigger picture.

This was particularly true for the Aida-Amneris confrontation duet “Fu la sorte” that opened the second part. Barton, who has expressed interest in adding the role into her repertoire, truly embodied Amneris in her mannerisms, and her palpable anger and jealousy, coupled with Willis-Sørensen’s grief-stricken portrayal, truly gave the scene an exceptionally dramatic heft. Vocally, I definitely think the time has come for Barton to tackle this full-throttle role, and I’ll be first in line to experience it!

The aforementioned excerpts from Rusalka came next, and here Willis-Sørensen really shone bright, as her “Song to the Moon” felt even more moving and heartbreaking than two years ago (perhaps because she didn’t have to balance herself on a tree branches this time). The hushed qualities that permeated “Depuis le jour” were in full display here, once again fully supported by Kim’s otherworldly backing. Lighting designer Justin Partier completed the fairy tale transformation by bathing the stage with soft turquoise lights that gorgeously reflected on the Concert Shell.

However, the biggest surprise of the night for me was Barton’s offbeat take on “Mon cœur s’ouvre à ta voix”, Dalila’s seduction scene from Camille Saint-Saëns’ biblical opera Samson et Dalila. Taken at much slower pace than normal, Barton imbued the aria with a sense of longing and belonging, so much so that it lost its vixenish quality and gained resemblance to a reverie … a remembrance for a lost Samson, perhaps.

It might not work for staged opera, but for this concert it functioned wonderfully, especially as it exhibited all the virtues of Barton’s voice; from her complete control of long phrases, her effortless scaling up and down over period of time, and especially her sustained legato. The crowd erupted in great applause after her performance, and Barton was genuinely moved by that response.

The pledge of friendship and loyalty in time of distress was the perfect closure for this concert, bringing the much-needed hope and optimism into the City by the Bay. On that note, both singers brought an encore in the form of a mash-up of Richard Rodgers and Oscar Hammerstein II’s ever popular “You’ll Never Walk Alone” and “Climb Ev’ry Mountain”, signaling a clear message: We shall overcome this pandemic together, with Arts by our side. Welcome home, San Francisco Opera!