Under the silver lake

“Who knows what evil lurks in the hearts of men?” went the introduction to the 1940s radio program The Shadow, an apt description for the San Francisco Opera’s production of Rusalka. 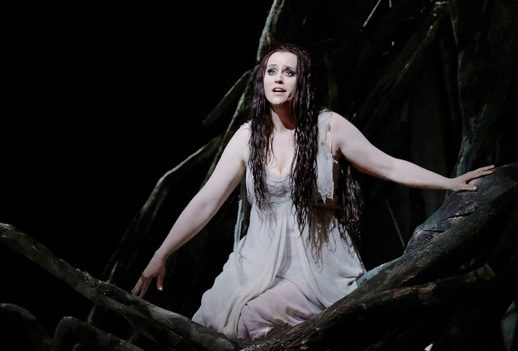 “Who knows what evil lurks in the hearts of men?” went the introduction to the 1940s radio program The Shadow, an apt description for the San Francisco Opera’s second-ever production of Czech composer Antonín Dvorák’s haunting opera Rusalka, that opened at War Memorial Opera House in a spectacular fashion Sunday June 16—after 24 years!

Dvorák wrote Rusalka, his penultimate opera, at the age of 60, with just three years left to live. Having written all nine of his symphonies and five of his symphonic poems, he shifted his attention back to operas, which he considered to be “the most suitable form for the people” in an interview.

The genesis of Rusalka was fascinating. The poet Jaroslav Kvapil, who wrote the Czech libretto, actually conceived the idea not for Dvorák, but for another,forgotten Czech composer, Josef Jiránek. When he realized he got a jewel on his hands, he decided to shop it around to other composers, including Oskar Nedbal, Josef Bohuslav Foerster, Karel Kovarovic and Josef Suk (Dvo?ák’s son in law).

It was later on when Kvapil saw an advertisement at National Theatre that Dvorák was looking a libretto, and through the recommendation of the Theatre’s director Frantisek Adolf Subert, he offered the libretto.

Kvapil’s libretto was based on the work of Karel Jaromír Erben and Bozena Nemcová; however, the story was clearly inspired by various literary works, particularly Hans Christian Andersen’s The Little Mermaid (with its identical central theme), Friedrich de la Motte Fouqué’s Undine and Gerhart Hauptmann’s The Sunken Bell.

In his memoirs, he himself acknowledged this “The idea came to me on the island of Bornholm. The fairy tales of Erben and Bozena Nemcova, which I was studying at the time, accompanied me to the sea. And there, merging together, were my impressions from Andersen, which I loved as a child, and the rhythms of Erben’s ballads, the most beautiful of Czech ballads.”

Nevertheless, Kvapil insisted that his libretto was a Czech fairy tale through and through, as shown in the foreword to the printed edition: “Despite various earlier motifs, and these not exclusively from the Czech environment, my fairy tale contains much of the Czech folk element and, through its spirit and form, I deliberately set out to adhere to the indomitable example of our ballad, to Erben.”

That spirit of staying Czech clearly struck a chord with Dvo?ák, and he poured everything he got within a short period of time (around six months) to produce a masterpiece, a work that according to many was his magnum opus. Strikingly, the score abounded with Czech folk tunes and melodies. His instrumentation shimmered with delight, almost bordering on Impressionism (Claude Debussy’s “impressionistic” opera Pelléas et Mélisande premiered a year later).

In that sense, Rusalka sometimes also was seen as Dvo?ák’s most Wagnerian opera, especially with his use of the leitmotif. No wonder that the esteemed Czech conductor Jirí Belohlávek, who conducted at SFO in both Leos Janácek’s Vec Makropulos and Jenufa before, called Rusalka “the queen of Dvorak’s operas”!

With so much emphasis on the Czech fairy tale natural of this opera, it was exhilarating to see a staging that not only was aware of that fact, but also respectfully paid heed to it.

From the start, the handsome production, who was created by Scotland director David McVicar for Lyric Opera of Chicago in 2014, unabashedly took delight in being full-blown fairy tale mode; in fact, each set seemed to be lifted directly from Brother Grimm’s Fairy Tales! Leah Hausman, McVicar’s frequent movement director collaborator, did a wonderful job in directing this for San Francisco Opera; every moment was well-choreographed and nothing felt superfluous on stage. 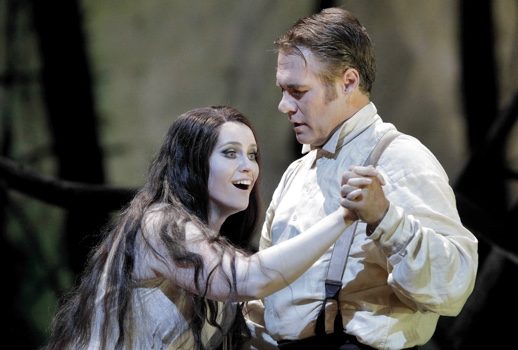 Even before the opera began, the audience was greeted by a giant framed picture of moon-lit dark forest when they entered the hall. This picture became a sort-of key to unlock the fairy-tale, as McVicar/Hausman used the Overture to tell the story of the Prince, stuck in unhappy relationship with a Princess (who later in Act 2 would sing as Foreign Princess).

The Prince gazed at the picture as if to suggest that the whole drama was in his imagination. I felt that it was an interesting idea, albeit rather unnecessary, as it was never visited again either during the opera (except for a minor detail that will be discussed below) or at the end! This scene was also the very first appearance of the running theme for the show – every human in it was evil. (Thus the inclusion of The Shadow’s warning above!)

The curtain (together with that framed picture) opened up for a detailed realization of the moon-lit forest from the picture, and John Macfarlane’s sets were truly an eye-opener, beautifully lit by David Finn’s soft luminescent lighting. Tall trees formed a dramatic background, with the moon hid behind the them, and in front, a small lake where Vodník the Water Goblin ruled.

Interestingly, it was exactly like what Kvapil described in his memoirs “If I were asked which place appeared in my mind as the setting for Rusalka, I would conjure up the small – if it could thus be called – lake in a forest glade in Zdar, where there was also a bathing pool in my young days, which was later removed, and its surface was covered in water lilies.” I also loved the fact that they used hydraulic lifts for the singers’ entry and exit in this scene; it truly enhanced the magical aspects of the scene.

The serene picturesque quality of the forest and the lake, however, was marred by the presence of a pair of bunker-type rocks on each side, one of them was where the witch Jezibaba dwelled. It seemed that humans had come to disturb them before; hence Vodník’s reluctance to help Rusalka. Combined with Moritz Junge’s costumes that dressed all the spirits in tattered human clothes, it gave a chilling effect; maybe they were all just ostracized, after all!

Act 2 brought us to a completely new set, the Prince’s castle, and it began with quite possible the only comic moments in the opera, the Kitchen scene. What a magnificent set it was! Set in a tall narrow kitchen, where various meats in various sizes (including a full-size cow right in front) were hang from the ceiling, the servants were gossiping while cooking, and the Kitchen Boy was busy stuffing a turkey. It generated tons of laughs from the audience.

What followed was the most harrowing moment of the opera. In a tall cold hallway adorned by numerous hunting trophies, the fish-out-of-water mute Rusalka was mocked, ridiculed and finally, rejected by the Prince. McVicar/Hausman presented a number of set pieces to highlight these brilliantly and the effect was absolutely devastating.

For Act three we were back to the forest, but it wasn’t the same. This time it was barer, as if all the happiness had been sucked out of the place. I loved how the final duet was staged very simply, just Rusalka and the Prince in that aforementioned pool, with a single spotlight highlighting them. It worked effectively to bring the focus to the duo, and made it a very poignant moment.

As you can see from the details above, it was such a rich production that produced much food for thought. San Francisco Opera assembled a mighty cast to bring it to fruition.

In the title role, soprano Rachel Willis-Sorensen made an outstanding role debut. Since four years ago, when she made her house debut as Eva Pogner in Die Meistersinger von Nürnberg, her voice has grown rounder, fuller and even darker. Dressed in white with raven hair, her Rusalka in Act one was imbued with a sense of determination and urgency, particularly in the famous “Song of the Moon” that she sang climbing on branches. 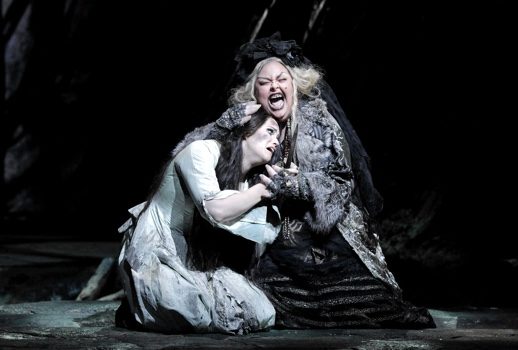 Interesting to note that in Act two, she started with the same dress worn by the (Foreign) Princess during the Overture, the only linkage I knew that connected back to that first scene. I thought she acted splendidly in the character’s silent scenes, both with her doe-eyed expression and with body language; I truly empathized with her plight. The final duet with Brandon Jovanovich as the Prince was truly ravishing in its intensity.

Jovanovich was the Prince in Chicago four years ago, and since then he sang the role in major houses around the world, including the Metropolitan Opera and Wiener Staatsoper. He had gone full heldentenor and his voice showed some muscularity that made the role sounded truly heroic.

Jamie Barton clearly had a great time portraying the witch Jezibaba. She played around with so many different shading and voice colors in the role, and her interaction with the three crow sidekicks was excellent. However, unlike Ursula in Disney’s The Little Mermaid, who was pure evil, her Jezibaba was capable to show compassion, particularly in Act three when she offered a solution, making her interpretation a well-round one.

Replacing Ferruccio Furlanetto, Icelandic bass Kristinn Sigmundsson made a welcome return as Vodník, the Water Goblin (and Rusalka’s father). He portrayed a caring and concerned father nicely, and his scenes with Willis?Sørensen was deeply heartfelt. His cursing the Prince, on the other hand, was terrifying!

Canadian soprano Sarah Cambidge, fresh from Adler Fellow Program, showed a lot of promise with her portrayal as icy Foreign Princess. Armed with angry glare, and a strong voice to boot, this was one lady not to mess with! All other comprimario roles were handled efficiently.

South Korean conductor Eun Sun Kim made a strong impression with her company debut, leading a performance that was powerful and passionate. She coaxed glorious playing from the Orchestra, although she had a little tendency to drown the singers at climaxes, with the most obvious victim was Laura Krumm as Kitchen Boy. Nevertheless, it was an auspicious debut for her, and the audience responded enthusiastically.

This was truly the highlight of San Francisco Summer Opera!