The San Francisco Opera became the first US opera company to present a full-blown production indoors on its home turf this season when they ushered the US opera audience into 2021-22 Season on Saturday September 21 with a stellar performance of Giacomo Puccini’s perennial favorite Tosca. 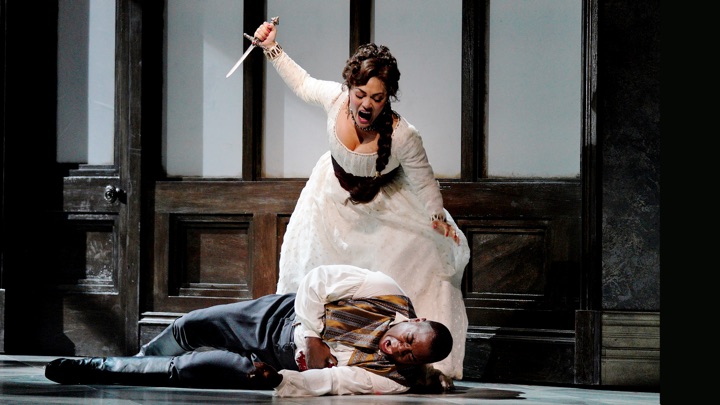 It was a night marked with many firsts, and in a way, it signified the changing of opera landscape ever since Covid-19 brought the Arts world in US to a complete halt in March last year, combined with the sociopolitical movements and awareness that radically (and yes, controversially) changed the way we thought and felt nowadays. It was truly a show of great stature, if not absolutely historic, and the audience that night reciprocated with appreciation and attentiveness rarely seen on War Memorial Opera House.

Obviously, the pandemic is still looming large, particularly with Delta variant run amok in various parts of the US. Following SF Mayor London Breed’s August 12 order that proof of Covid vaccination would be required for entry to all large indoor events in San Francisco (which went into effect just a day before the opening night), San Francisco Opera required all patrons ages 12 and older to show proof of vaccination to attend performances along with a photo ID, and they sent multiple reminders through emails, texts and phone calls about that requirement.

For this purpose, ushers were deployed on the steps of War Memorial to check vaccination cards and IDs, even before the audience approached the main doors. Upon approval, they were then issued a sticker which was subsequently collected by the ushers who checked the tickets. It was a smooth and painless procedure, and I was happy to report that pretty much all audiences adhered to the mask requirements throughout the show.

Friday’s Tosca was particularly memorable as it served as a manifestation of SF Opera’s full commitment to diversity and inclusion. In August 2019, San Francisco Opera established Department of Diversity, Equity and Community (DEC) led by Charles Chip McNeal, establishing “institutional commitment to diversity, equity and inclusion (DEI) both within the organization and externally” as one of its core focuses. 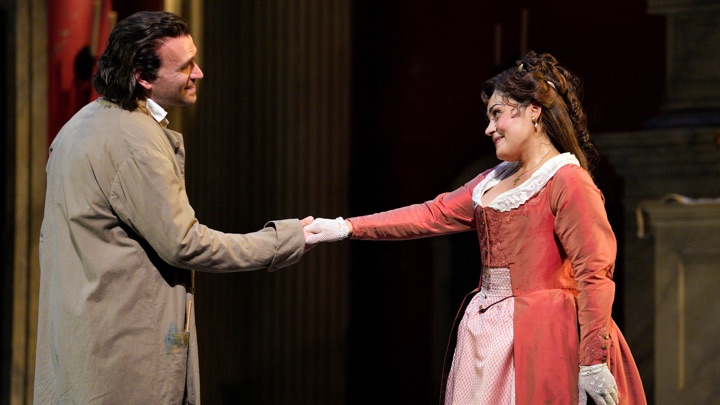 San Francisco Opera assembled a diverse and well-chosen cast for this performance. It is a pretty rare occurrence to have a Latina, an out gay man and an African-American as the three leads of a Tosca anywhere, especially with Kim leading the orchestra.

Furthermore, San Francisco Opera truly made a statement that night, by having an African-American Angelotti (sang with booming conviction by Soloman Howard in a luxurious casting) stormed the stage, fearing for his life and “seeing police in every face” in the beginning of the opera. The audience’s expectations were set right at that point—this was not your regular Tosca, folks!

While I initially had doubts over SF Opera’s decision to start the new season with a revival of Tosca (over the brand new Fidelio mounting), they all dissipated as soon as the opera began, as the powerful story of love, life and art all entangled in a web of politics, corruption, lies and lust still rang true to this day—especially as clearly demonstrated by this performance.

The audience entering the vast hall of War Memorial was also greeted by something new, a complete  upgrade of all the seats (and carpets) in the auditorium to include better sight lines, an increase in legroom and seat width, and new railing and space options for disabled and semi-ambulatory patrons. As reported, it was “a more than 10-year labor of love” that bore $3.53 million price tag and a loss of 114 seats, so much so that a New York Times article jokingly called the renovation “The Opposite of Airlines”!

I personally could attest that the new seat was indeed roomier with better sightline, and the three inches difference with the old seat truly made it easier to get in and out of the new seat. As I was sitting next one of those new railings, they proved to be sturdy and useful additions. (I was, however, still not completely sold on the new cup holders!)

San Francisco Opera General Director Matthew Shilvock prefaced the Saturday performance with a little speech welcoming the audience to the War Memorial after 20 months hiatus (since the last performance of Hansel and Gretel in December 2019). It was a heart-warming moment when he thanked the 500 healthcare workers in the audience and subsequently, a really heartbreaking one while he remembered the passing of Michael Morgan, the well-beloved long-time Oakland Symphony music director and a visionary in Bay Area classical music scene, on August 20. 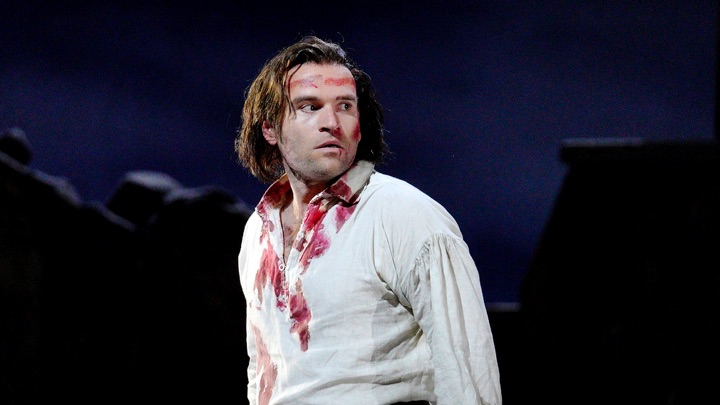 In my review of the production premiere, I expressed a couple reservations regarding Shawna Lucey’s direction and especially, Robert Innes Hopkins’ sets. This time around, the sets worked much better to achieve the hyperrealism of world in chaos—which seemed to be the desired look and feel for this mounting—rather than the glamorous projection for the premiere.

Even Lucey’s notes seemed to indicate so. Her direction for the crucial Act 2 confrontation between Scarpia and Tosca was particularly a major improvement; it was excellently choreographed and beautifully acted so much so that at times it was hard to watch! In the era of #MeToo movement, where almost daily we heard such abuse from people in charge, the scene truly gave the audience food for thoughts as reflected by the complete silence from that night’s audience during that episode.

Nevertheless, the strength of any successful productions of Tosca lies with the three main characters. Tenor Michael Fabiano, last seen in Manon four years ago, made a welcome return to the SF stage as the painter Cavaradossi, a role that he debuted merely two months ago in Paris, then Madrid. He brought his usual intense and strong personification of the character, but here there was such freshness and clarity of the tone that was very pleasing to hear.

His bright voice effortlessly navigated the high tessitura of “Recondita armonia” (comically interjected by Dale Travis’ Sacristan), while depicting a man in love joyfully. It was refreshing that Fabiano avoided the self-indulgence route that a lot of tenors did in the role (for example, by holding notes for exaggerated amount of time); he certainly didn’t milk the famous “E lucevan le stelle” (it wouldn’t surprise me if some found his take underwhelming), but instead it fully characterized a hopeless man about to be executed.

Bass Alfred Walker, the Father in the Hansel and Gretel 20 months ago, presented the evil Scarpia in a chilling portrayal, down to his mannerisms. There was no doubt that he was the man of power, ready to do anything to get what he wanted, turning act two into a claustrophobic tableau of power abuse as mentioned before. Although there were a few times he was drowned by the orchestra, his dark brooding voice was effective in developing a wholesome character. 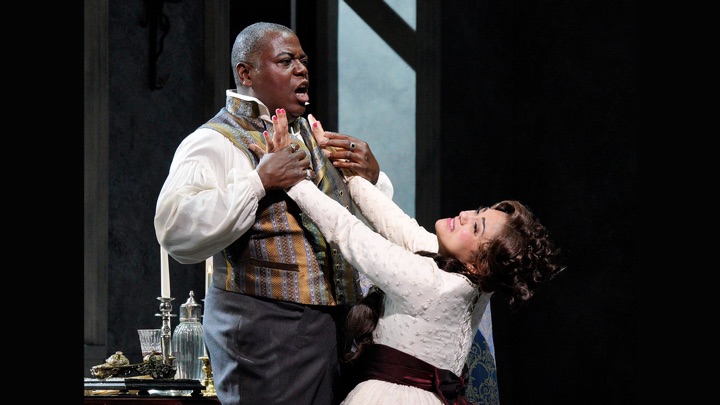 Soprano Ailyn Pérez made a role debut as the titular role with this, and boy, she certainly didn’t disappoint. She embodied the role heart and soul, and her bright lyrical soprano voice embraced the various transformations required for the role, from playful and lovey-dovey in Act 1 to anger, sadness, frustration, and resolution in later acts.

However, the greatest aspect of her performance was her refreshing take on the character. Instead of the merely a Diva with the usual “Look at me I’m a diva!” moments, her Tosca was a fully realized woman who happened to be a singer and full in love, which subsequently crushed by the oppressive and corrupt system that she couldn’t get out of it.

She was committed thoroughly to this interpretation, (once again) particularly in the mesmerizing act two confrontation. Anger, frustration and resignation reflected on her face during the meditative “Vissi d’arte”. She was unquestionably believable as a woman pushed to her limit to take such an extreme measure to stab Scarpia, much more so than any other Tosca I had ever seen!

All other comprimario roles were handled handsomely, and it was a joy to hear the glorious San Francisco Opera Chorus again during “Te Deum” that ended Act 1. Kim led the opera orchestra in a reading with so much strength and vigor, almost to the point of unsubtle at times. Nevertheless, she paid close attention to the details, and more importantly, she made sure to keep the performers fully supported. I’m looking forward to more exciting times at the opera with her in command!