Plucked from obscurity by Howard Hughes and sold to the public as a buxom, brunette heir apparent to his former protégé, Jean Harlow, Jane Russell became a household name before she ever shot a single reel of film. 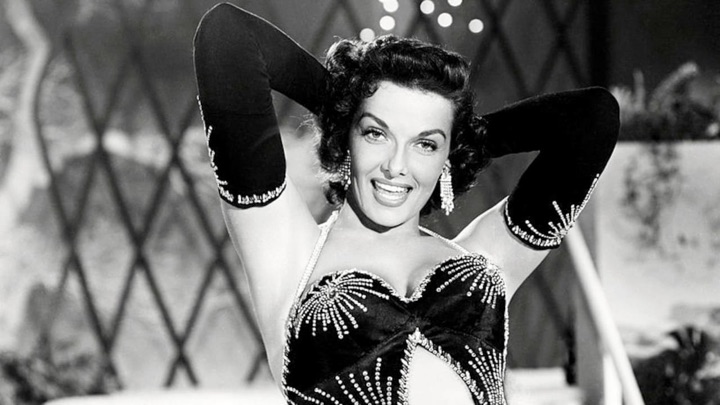 Christina Rice’s new biography of Jane Russell takes its title from the tagline for The Outlaw, her screen debut: “Mean… Moody… Magnificent!” Its subtitle, “Jane Russell and the Marketing of a Hollywood Legend,” refers to the aggressive and overblown campaign to turn an unknown glamour girl from the San Fernando Valley into one of the Golden Age’s most illustrious stars. Yet across 300 engagingly written and well-researched pages, Rice shows how this talented, troubled woman emerged from the hype machine to craft one of Hollywood’s most interesting and idiosyncratic careers.

“By the early 1950s, Jane Russell should have been forgotten: at best a curious footnote in the annals of Hollywood history, and at worst a complete joke,” Rice writes in her introduction. Plucked from obscurity by Howard Hughes and sold to the public as a buxom, brunette heir apparent to his former protégé, Jean Harlow, Russell became a household name before she ever shot a single reel of film. The Outlaw, meant to be her breakthrough in 1941, instead languished in the can for most of the decade, while Hughes restricted her abilities to make other pictures.

The first third of “Mean… Moody… Magnificent!” chronicles the unsettling experience in excruciating detail, from the years-long bouts of reshooting that caused Hughes to burn through many directors—ultimately claiming the credit himself—and wage a ground war with the Production Code Administration over Russell’s dialogue, appearance and wardrobe.

The film itself was released in fits and starts over the course of several years, sometimes with Russell and co-star Jack Buetel making personal appearances and performing live skits. Ultimately, though, The Outlaw met with tepid reviews and a fair amount of ambivalence from the moviegoing public. Although Russell emerged as a popular pinup girl during World War II, the attempt to turn her from a cause célèbre to a bona fide celebrity would have fizzled were it not for her grit, perseverance and ability to advocate for herself. 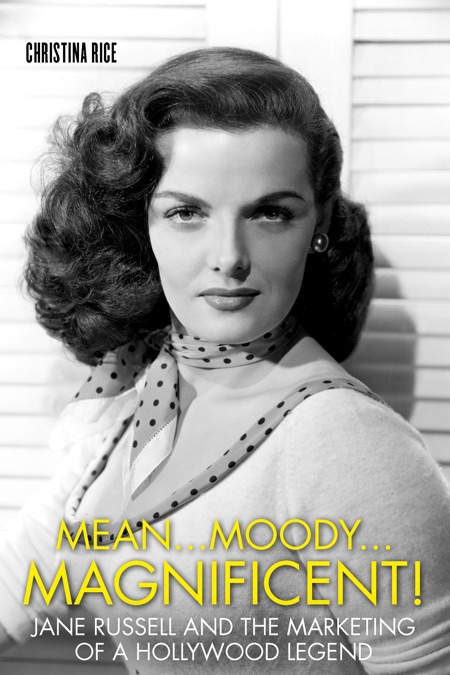 Rice offers strong background to suggest the origins of Russell’s self-possession. Her mother Geraldine—herself a former actress—comes across as a woman ahead of her time, a salt-of-the-earth Canadian transplanted to California who weathered the deaths of a beloved husband and her first-born child with the kind of resolve seen in Steinbeck novels.

Geraldine instilled a strong Christian faith in her only daughter, along with a sense that you must act as your own advocate to make a name for yourself. That attitude served Russell well as she embarked on a professional life that included early forays into regional theater; a religious girl-group called “Feel the Spirit” that teamed Russell, Andrews Sisters-style, with Rhonda Fleming, Connie Haines and Beryl Davis; and a nightclub career that continued until just weeks before her death in 2011, at 90.

Russell never shied away from publicity, and she emerges from these pages as a canny source of information. Rice writes with refreshing clarity on her rocky, decades-long marriage to football player Robert Waterfield (“He beat her. She was a battered wife,” according to a friend); her second marriage, to actor Roger Barrett, which ended with his death after just three months (“Gradually [her] depression started to lift, through Jane would never fully recover”); and her life-changing trip to rehab at age 79, after decades of periodic alcohol abuse (all evidence suggests she remained sober until her death).

Although the comparison isn’t directly suggested, it begins to feel as if Russell had more in common with her Gentlemen Prefer Blondes co-star Marilyn Monroe than meets the eye. The press cast Russell as a big sister to the waifish, neurotic Monroe, and although the two women never became close friends, Russell felt protective toward her. Yet while Russell’s image appeared unflappable to the public, her private life overflowed with turmoil, including the scandal surrounding her adoption of an English baby boy in defiance of international law and a string of affairs that plagued her first marriage. Perhaps she was ultimately more resilient than Monroe, but the pair were undoubtedly sisters in sorrow.

In addition to Russell’s life’s work advocating in favor of adoption—a botched abortion as a teenager left her unable to have more children of her own—Rice shines an intriguing light on the actress’s stage career. Her sole Broadway stand was a five-month stint in Company, replacing Elaine Stritch, an experience she found challenging but ultimately boring. She preferred shorter stock runs, where a performance could remain fresh without much effort.

Although a run of Pal Joey in Toronto was apparently chaotic, Russell seems an ideal Vera Simpson on paper. She loved playing Mame so much that she accepted an offer from an obscure Illinois playhouse just so she could do the role again. A tantalizing prospect never realized: At the time of her second husband’s death, they were planning to star in a national tour of Hello, Dolly!

Although Russell penned her own autobiography in 1985, this is the first independent appraisal of her life and times. Rice hypothesizes that Russell’s conservative politics and unapologetic religiosity might have kept some writers from taking her up as a subject.

There is compelling evidence that Russell was not a proselytizer despite her lifelong devotion, but some of Rice’s arguments that she was more progressive than her public comments on feminism, homosexuality and secularism suggest are unpersuasive. As is the case with many celebrities of the Golden Age, loving them might just mean having to look the other way on their unenlightened politics.

Rice unquestionably succeeds in her brief, perceptive appraisals of Russell’s filmography, which often button accounts of their blissful or difficult production. She skillfully fuses the enthusiasm of a fan and the insight of a critic, and a positive recommendation could make you want to immediately search out an obscure title.

Offscreen, Jane Russell was indeed mean, moody and magnificent. She was also more than any one adjective could express, a fact beautifully rendered in this must-read biography.