I often think of Boys in the Band as the gay play equivalent of Kern and Hammerstein's Show Boat—it's hugely important in theater history, but the politics have become extremely problematic. 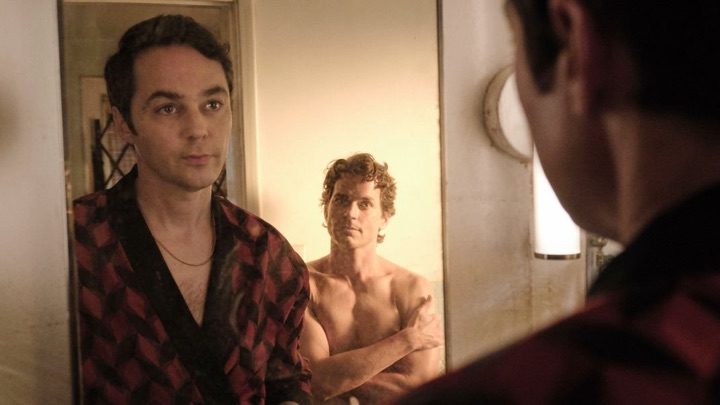 David Fox: Cameron, given the 32-year difference in our ages, I don’t get to say this often about a work of modern drama, but—The Boys in the Band was before both our times. The play, an off-Broadway sensation, premiered in 1968, when I was only 12. I don’t think I was aware of it at all. The movie came along in 1970, and for me, those two years were significant. By then, I was beginning to think of myself in more adult—which is to say, more sexual—terms. I clearly remember the poster: side by side photographs of Leonard Frey as Harold and the beauteous Robert La Tourneaux as Cowboy, over a caption that read: “Today is Harold’s birthday. This is his present.” I doubt I really understood what that meant, but somehow it grabbed me in a visceral way. A year or two later, I saw the movie and also acquired the excellent audio recording, both of which preserve the superb original cast. I was a full-fledged groupie… and in many ways, I still am. Yes, BITB is a period piece—but it was revelatory in its moment, and certainly (you should forgive the expression), seminal in my own life. And I think it’s still powerful and resonant today.

Cameron Kelsall: I knew The Boys in the Band as a title long before I had much sense of it as a play. By the time I came of age, the canon of queer storytelling had expanded significantly—particularly in the theater, with Angels in America, Falsettos and The Normal Heart at the forefront—and BITB was regarded mostly as a quaint relic of pre-AIDS life for gay men in New York City. That reading certainly sells the work short, even without the sudden jump in its popularity, stemming from a Tony-winning Broadway revival that has now been adapted into a Netflix movie. Mart Crowley’s script is witty, bitchy and campy, sure, but it also homes in profoundly on aspects of the gay male experience that remain painfully true today.

DF: You know, it’s easy to understand some of the current nay-saying around BITB, but I remember that even at the time, a number of people I knew—including gay men—were quite sniffy about the script. I was told by one older friend in particular that it wasn’t really playwriting at all: Crowley had arrived in Hollywood from Vicksburg, Mississippi, and attended his first big gay party, at which he was essentially a stenographer—the resulting transcript, in this scenario, was BITB. I can believe there’s some truth to this, but it vastly underrates Crowley’s considerable skill. One thing I’m always reminded of when I see it—there are nine characters, who talk in groups throughout, and in every moment, each one registers as an individual with a specific voice. Hardly any current playwrights can manage that.

CK: Yes—I think it’s fair to say that the play’s unusual success in a time that was not particularly friendly to overt homosexuality has much to do with Crowley’s style, which hews to traditional dramatic structures. The content may have been outré, but the form is textbook. And that likely explains why it holds up so well. The current film adaptation, directed by Joe Mantello and featuring the entire cast of the Broadway revival, isn’t perfect, nor does it come close to erasing memories of the original. But in terms of translating the play to film, it largely succeeds.

DF: The producer here is, of course, Ryan Murphy, and I think we should acknowledge a debt of gratitude, though I agree that the results fall short of what I’d hoped for. But Murphy is a force to be reckoned with, such that he could actually get this project made—and (though I’ve seen some lapses in this) he’s characteristically sensitive to period style. The first smart thing he did here was to keep it set in 1968. I often think of BITB as the gay play equivalent of Kern and Hammerstein’s Show Boat—it’s hugely important in theater history, but the politics have become extremely problematic. We need to always remember that these are works that capture their moment, warts and all. Having said that, I also think BITB speaks to aspects of gay culture that still pertain today. But it’s a work of history, and Murphy and Mantello keep it there—sometimes to an almost fetishistic degree. Much of this BITB film looks close enough to the original as to be a deliberate hommage.

CK: It would be ludicrous to try and update this play to a contemporary setting, particularly one in which gay marriage is an actual legal concept and gender variance has almost become passé. The setting here is much better than the too-lurid design of the Broadway revival, though it doesn’t always nail the claustrophobic aspect of the William Friedkin-directed film adaptation of his off-Broadway original. (The script, by Crowley, who died in March, and Ned Martel opens the story out somewhat, with flashbacks and additional scenes.) Once the story hits its stride, about an hour in, it really does capture the devastating quality in the writing—the sense of people who can’t help but cause pain to those they care about—even though some of the acting is uneven.

DF: I think it’s fair to say that BITB really stands or falls with the acting, and here as you say, it’s a mixed bag. To me, seeing this film, which so closely resembles its predecessor, is a double-edged sword—the similarity makes comparisons inevitable. In one case, it seemed almost like an acid flashback to me: Tuc Watkins so startlingly resembles Laurence Luckinbill both physically and in his performance that I wondered if I was losing my mind. But for the most part, though Mantello/Murphy’s cast get the job done, they can’t approach that magic of Friedkin’s group, who individually and together are among the most powerful ensembles I’ve ever seen.

CK: A lot was made of this production featuring an all-gay cast. I understand the value of identity politics, but at the same time, it minimizes the contributions of actors like Luckinbill and Cliff Gorman who really put their careers on the line at a time when even playing a gay role could be professional suicide. And the results here show that a gay actor isn’t always a guarantee of quality. I think you liked Robin de Jesús’ performance as the flamboyant Emory more than I did, but even at his best moments, you must agree that he doesn’t come close to the heartbreaking pathos of Gorman in the pivotal telephone scene.

DF: Emory is, of course, one of the real political flashpoints of BITB as seen through a contemporary lens. It can certainly look like queer minstrelsy. What I admired about de Jesús was that he put a different stamp on the character that preserved the sense of outsider-ness, while making him more palatable for today’s audience. But I also found his performance fairly limited in range, and as you say, he’s not up to the shattering climactic moments. But honestly, I don’t think any of them hit that high watermark. In addition to de Jesús, the other performance I thought strongest was Andrew Rannells as Larry, but it’s a fairly marginal role. On the other hand, I found Zachary Quinto objectionable: clearly imitating the great Leonard Frey, but utterly lacking Frey’s unique combination of danger and charm.

CK: The performers I thought fared the worst were the ones that tried too nakedly to copy their predecessors. Quinto’s almost vampiric Harold is definitely the nadir, but I’d add Charlie Carver’s Cowboy to that list too; he’s the least persuasive hustler you could imagine.

DF: Carver has for me the worst moment in this entire film—when he arrives and sings “Happy Birthday.” It’s clearly deliberately out of tune, but in a way that no person ever would actually sound. He’s semaphoring the character’s dumbness, and it’s cringeworthy bad acting—a textbook example of indicating.

CK: Jim Parsons is an actor I tend to find cloying, but I thought he handled Michael’s destructive self-loathing fairly well. The best overall performance, to me, was Michael Benjamin Washington as Bernard—the other potentially problematic role by today’s standards, as the only Black character in an otherwise-white group. (Robin de Jesús is Latino, but the character of Emory is not expressly written as such.) I thought Washington really communicated the sense of feeling like an outsider even among your own community.

DF: Parsons is, I believe, a Texan by birth, and here as often with him, I pick it up in his speech. If we assume that Michael is in some ways an analogue for Crowley, the hint of Southern-ness is probably apt. I’m less taken with Parsons’s sing-song comic inflection on many lines—sometimes I thought he was channeling Annie Potts in Designing Women. I agree that Washington gives a strong and endearing performance, but he didn’t break my heart the way the original, Reuben Greene, did. Speaking of heartbreak, we should also acknowledge that BITB carries deep emotional weight because of the sad history of so many people associated with that first company. Inevitably, AIDS took a high toll, with five of the nine actors dying from it in the ’80s and ’90s. Greene himself more or less fell off the map—there seems some question about whether he is living or deceased.

CK: If the play itself was a testament to its moment—in a sad way, so too was the outcome for many of the actors. It is wonderful that the performers here are able to live openly, with little-to-no fear for their professional status, but what’s lacking, to a degree, is the transgressive sense of the original, which could never be replicated.

DF: Absolutely agreed. In fact, I wrote this sentence as I was watching last night: “In 1968 and ’70, doing this play was a monumentally risky and daring thing for an actor. Now it’s just a really good gig.” In a broader sense, while I’m grateful to Murphy for bringing BITB back to a younger audience, I’m not sure what the point of this new version is. The original is, I’m happy to say, still easily findable—and frankly, in every sense, stronger than this remake.

CK: The answer, then, is to watch them both. We’ll be slipping back into our regularly scheduled viewing next week too, as we continue to consider the old Hollywood type movies that the characters from BITB constantly reference.

DF: Coming up: Rosalind Russell, Ginger Rogers, Susan Strasberg and more. (If you thought BITB was as gay as we get, just wait.)

[For some reason Disqus comments are not displaying with this story. You should be able to access the comments HERE.]