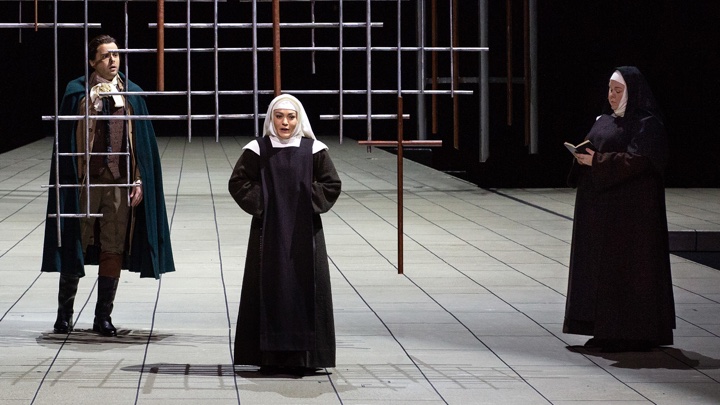 In a now-iconic opening tableau, Dexter’s nuns appear silhouetted against a giant white crucifix, a shadowy refuge for the troubled aristocrat Blanche de la Force during the cusp of the French Revolution.

Poulenc wrestles with faith, freedom, and martyrdom in this opera and Dexter takes no sides, giving the audience space to consider whether the Carmelites are heroic victims, religious zealots, or both.

But Sarah Ina Meyers‘ revival highlights something far more intimate, underlining the fate of ordinary women forced to reconcile pragmatism and ideology in a time of upheaval. It’s a revival to catch, with finely etched portrayals from the cast. 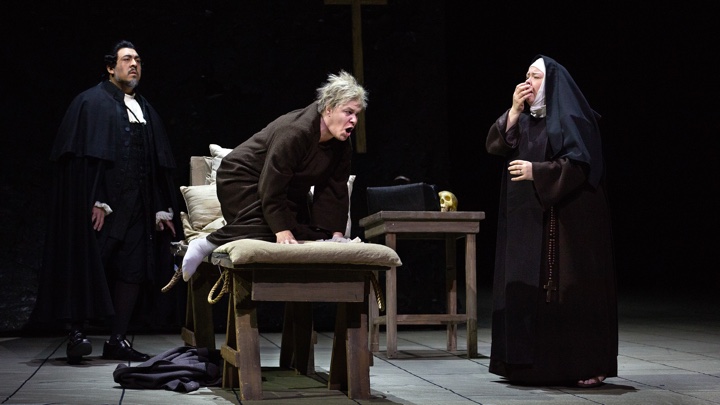 Though Dexter’s production may be austere, the cast assembled for this revival was anything but. Indeed, this may be the starriest revival the Met has put together in decades, led by the Ailyn Pérez making her role debut as Blanche de la Force.

On paper, Blanche is an odd fit for Pérez, all glamour and charisma in a role that calls for neurotic fragility. She didn’t seem dramatically quite at home with the character, though she adopted an appropriately delicate sound—so delicate that at times she was swamped by the orchestration. She grew in dramatic and vocal stature as the opera progressed, and when she allowed her sound to blossom, she soared voluptuously over the orchestra.

I couldn’t help but think that she would have been more effectively cast as Lidoine, here sung by Christine Goerke as a late replacement for Eva-Maria Westbroek. Goerke last sang the role two decades ago and a steady diet of Wagnerian and Straussian heroines has taken its toll on her voice, which has turned wobbly and poorly pitched. 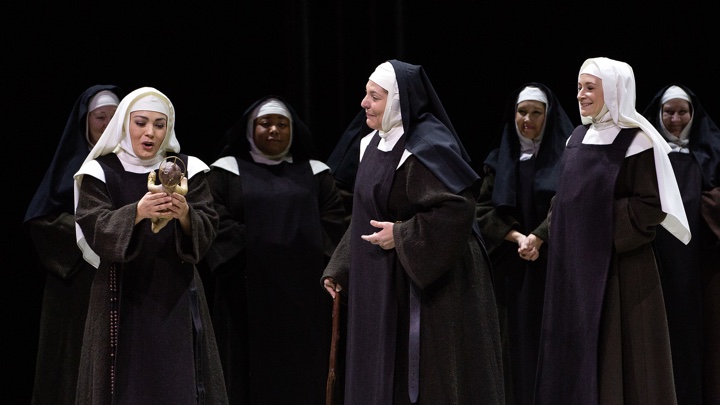 But if you can ignore a few wayward notes, Goerke offers an intriguing take on Lidoine—instead of Jessye Norman‘s hauteur or Leontyne Price‘s sumptuousness, we have an earnest, practical woman trying to do what she can under the worst of circumstances. She was particularly touching in the prison scene, shorn of her ecclesiastical garb, comforting the other nuns as they face their death.

Goerke’s Lidoine contrasted nicely with Jamie Barton‘s formidable Marie—I’ve rarely seen the antagonism between the two characters, both personal and ideological, portrayed with such specificity.

Barton’s refulgent mezzo was an ideal fit for the role, a consoling mother figure in one scene, a fanatical zealot the next. Though her middle register sounded curiously muted her upper register remains a wonder, filling the auditorium with blazing sound.

Barton also sparred nicely with Alice Coote, here making her role debut as de Croissy scarcely half a year after debuting Marie in Zurich. Coote’s fruity mezzo has become increasingly mannered with time to the point of eccentricity – indeed, some of the sounds she produced seemed scarcely human. But it was a fine fit for the dying prioress, and Coote was on tremendous dramatic form in her agonizing death scene.

Of the cast, I was most intrigued by débutante Sabine Devieilhe, whose crystalline coloratura and petite presence hardly seem an ideal fit for the Met. Happily, her bright soprano carried easily through the auditorium, with the added benefit of a native speaker’s diction. Constance can, frankly, be an annoyance, but Devieilhe brought a wonderful dignity and empathy to the role.

Also making his house début was Piotr Buszewski, who brought an attractive lyric tenor to the Chevalier and proved a capable dramatic foil to Laurent Naouri’s scene-stealing Marquis, all old-fashioned bluster.

Presiding over it all was Bertrand de Billy, who combined fine attention to timbral detail with a symphonic sweep that occasionally drowned out the big-voiced cast. The final notes, fading into silence, were perfectly judged, leaving the audience appropriately awestruck.