“The function of prayer is not to influence God, but rather to change the nature of the one who prays” – Soren Kierkegaard 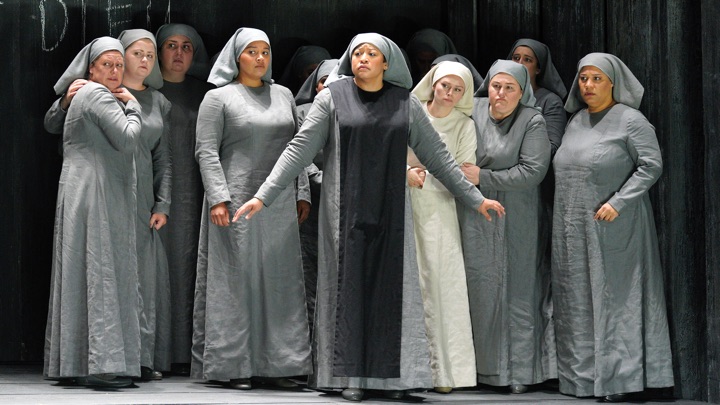 San Francisco Opera is continuing their Centennial season by presenting a 20th century masterpiece that was deeply embedded in their 100-year history, Francis Poulenc’s haunting second opera Dialogues des Carmélites (Dialogues of the Carmelites), which opened on Saturday night October 15.

Merely eight months after the world premiere of the opera at La Scala on January 26, 1957, San Francisco Opera staged its American Premiere in English with Dorothy Kirsten as Blanche and in her American opera debut, the great Leontyne Price as Madame Lidoine.

There were only two other seasons Carmelites were mounted, the revival of 1963 and, in 1982, the famous John Dexter’s production (which is still going strong at the Met) graced the War Memorial with Price reprising the role of Madame Lidoine, Virginia Zeani (the original Blanche) as Mother Marie, the great Régine Crespin as Madame Croissy, and Carol Vaness as Blanche. This performance made history by being the first to be sung using Poulenc’s original text (in French)!

As one of the most enduring 20th century opera, Poulenc’s Carmelites almost requires no introduction; the website Operabase listed no less than 11 different productions all over the world, from New York and Glyndebourne to Vienna and Munich! 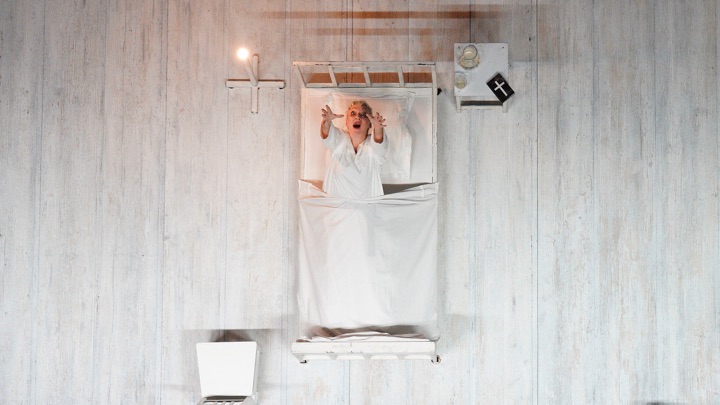 Based on the (screen)play of the same name by Georges Bernanos – adapted further from Gertrud von Le Fort’s novella Die Letzte am Schafott – the story followed the emotional journey of the fictional aristocrat Blanche de la Force during the real-life event of Martyrs of Compiègne, where 16 Carmelites nuns were executed by the guillotine towards the end of the Reign of Terror in 1794 for refusing to denounce their faith.

Carmelites itself had been interpreted by many a reflection of Poulenc’s own (re-)affirmation with Catholicism and his struggle with depression throughout his life; it was no wonder he thought Bernanos’ texts “such a moving and noble work”!

For this occasion, San Francisco Opera decided to present Olivier Py’s acclaimed production of Carmelites, revived by Daniel Izzo. Py’s staging, which premiered at Théâtre des Champs Elysées in 2013 (and went on to win 2013/14 Grand Prix de la musique du Syndicat de la critique prize), was truly a thing of extraordinary beauty, where taut dramaturgy was married to a stark simplicity to create the most gripping account of the opera and having slick sets that advanced nonstop like a well-oiled machine truly moved the story along!

Pierre-André Weitz’s sets consisted of movable geometric panels that handsomely denoted room, house, cross, church, even woods! I personally loved the usage of a single chandelier to differentiate the Marquis’ mansion and the convent. 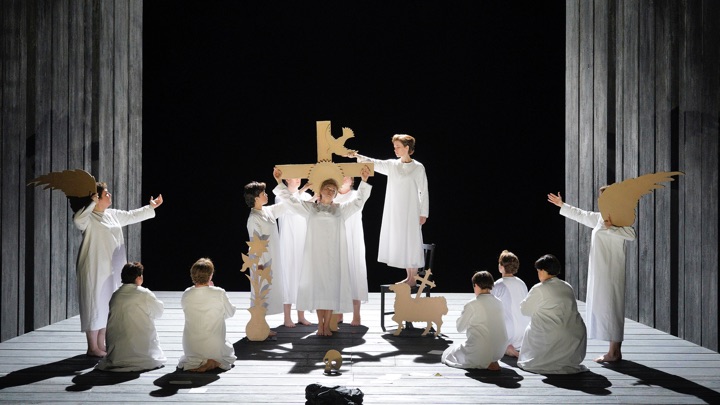 I actually really enjoyed the utilization of almost monochromatic colors for most of the sets and the costumes (I guess it’s rather inappropriate to insert “Fifty Shades of Grey” jokes here!); while it did little to help differentiate the nuns (rather than Blanche and Constance in white and the Prioress in two-tone black and grey), it set the tones nicely and effectively, particularly as illuminated by Bertrand Killy’s thrilling lighting.

Two scenes were particularly memorable in terms of staging, the first one was the decision to stage Madame Croissy’s death scene that ended Act 1 vertically (in other words, the bed was placed on the wall). This was truly a genius idea, as her agony and frustration – central to the scene – were visible clearly to the audience, and it elevated the moment to almost unbearable level!

The final scene was a study in simplicity and profundity, as Py/Izzo arranged the sisters in a semi-circle shape holding hand singing “Salve Regina”, all in white, with the background simply a dark starry night. One by one, as the guillotine sound interrupted the hymn, one of the sisters nodded and retreated to the back as if she turned into a star in the night-sky.

Interestingly, Blanche as the final person, stepped in not in white dress, but in black, the same color she wore in the beginning of the opera, as if signaling she came full circle to overcome her fears (or “fear of fears” as her brother pointed out) and to embrace who she really was! It was also worth to note that the various biblical tableau vivant that were employed during the orchestral preludes filled the stage wonderfully and fitting the theme! 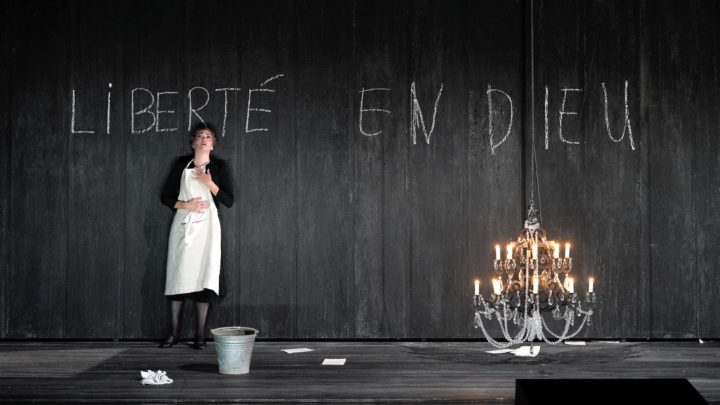 If the production was excellent, the music-making of the night truly lifted the experience to another level. This was truly exciting and somewhat surprising to me, particularly since pretty much everyone on stage that night made role debuts in their corresponding roles, including the Music Director Eun Sun Kim, who conducted Poulenc’s opera for the first time!

Kim led the SF Opera Orchestra in a reading with remarkable beauty, emphasizing the tonal effects and colorings of the many instruments, while paying close attention to Poulenc’s syncopated rhythms. In her hand, the score sounded alive, vibrant and yes, modern, while ensuring that the texts were fully heard. After this and her conducting Adams’ Antony and Cleopatra, I’m now looking forward more of her in contemporary opera in the future!

Heidi Stober’s Blanche was truly a tour de force of a performance, ranging from timid and scared in the first scenes to defiant during the heartbreaking scene with her brother in Act 2, to acceptance in the final scene (singing the final stanza of “Veni Creator Spiritus”). Her voice was supple and robust at the same time, and the dark undertones that she employed gave a perception of a tormented soul throughout, a far cry from other roles she had performed so far at War Memorial.

Debuting soprano Michaela Schuster stole the scene with her take on Madame de Croissy, particularly during the dramatic death scene that closed Act 1. With a bright bold voice, she singlehandedly turned that considerably long moment into a memorable one, drawing parallel to Jesus in Gethsemane. 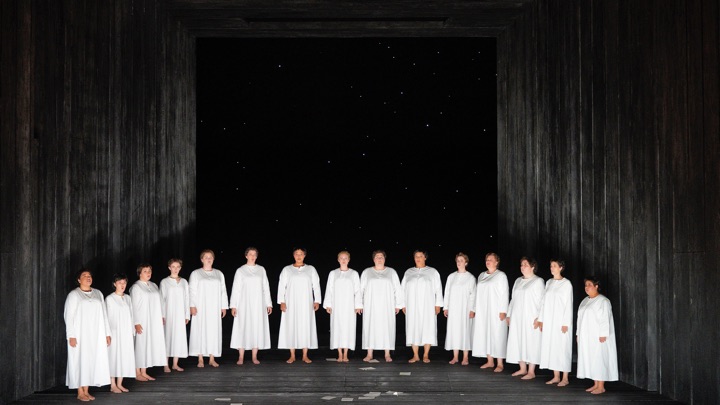 Michelle Bradley imbued her Madame Lidoine with grace and dignity, her decision to be a martyr in Act sounded heartfelt. Melody Moore turned a warm and kind Mother Marie, completely devoid of irony. Only Deanna Brewick slightly disappointed on that Opening night; while she sang and acted extremely well as the carefree Sister Constance, her delicate instrument tended to get swallowed by the Orchestra, particularly at the very top!

Albeit in smaller roles, the men weren’t a slouch either. With his ringing voice, Ben Bliss once again impressed as Chevalier de la Force, particularly in the heartbreaking duet with Blanche in Act 2. Once again, Dale Travis found the humor and humanity in Marquis de la Force, while Brenton Ryan employed his bright sound to interpret the caring Chaplain. All other comprimario roles were handled beautifully, and the SF Opera Chorus sounded haunting and gorgeous off-stage.

All in all, this was such an extraordinarily divine experience that I made a vow to catch it again before the whole run ended. Congratulations to San Francisco Opera for presenting such a deeply felt production, especially at a time where everything seemed to be going haywire!