The fuzzy end of the lollipop

That Some Like It Hot—this season’s high budget and high-profile Broadway musical—fizzles rather than sizzles is not only a disappointment, but also a bit of surprise. 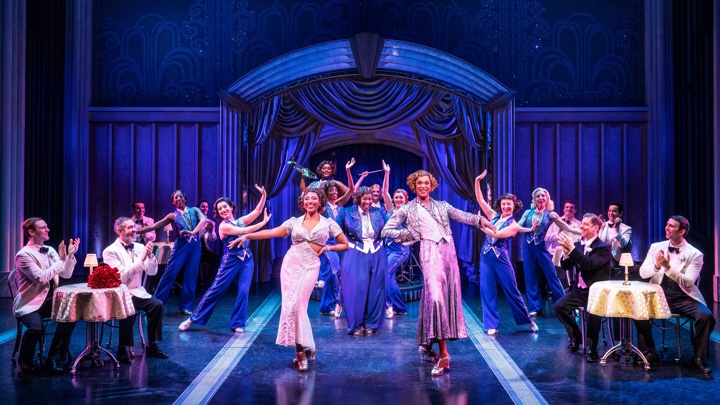 David Fox: On paper, the adored 1959 Billy Wilder/I. A. L. Diamond film comedy seems sure-fire for a stage musical adaptation. But it isn’t. And not for the first time.

Back in 1974 in Los Angeles, I saw Sugar, a SLIH adaptation with a fine pedigree, including a score by Jule Styne and a book by Peter Stone. I recall that despite good performances by Robert Morse and Larry Kert (replacing Broadway’s Tony Roberts), it was an inert, colorless affair. Yet the show chugged on. Nearly 30 years later, it showed up again, slightly reworked and under its original title, at the Playhouse in Rodney Square in Wilmington, Delaware. “Inert” and “colorless” no longer applied—this was all the way to grotesque. Tony Curtis, one of the original film stars now recast in a comic supporting role, was awful, and the sexual politics of the story felt joltingly out of touch.

Cameron Kelsall: If the sexual politics of Some Like It Hot seemed questionable in 1974 and 2003, they’re even more fraught now. In recent years, a proliferation of Broadway musicals have traded on familiar tropes of men in dresses—think Tootsie, Mrs. Doubtfire, and even the popular Hairspray—in ways that now seem uncomfortable, condescending, and often downright sexist. In a way, this adaptation takes a hard tack in the other direction, by retrofitting a very contemporary attitude toward gender fluidity and sexual freedom to what is essentially still an old-fashioned story. In doing so, though, the creative team—which includes librettists Matthew Lopez and Amber Ruffin, composer Marc Shaiman, and lyricist Scott Wittman—still default too frequently to the tried and true. The results are flashy and occasionally woke, but rarely memorable.

DF: For all the attempts to look at the original material in light of greater identity awareness, this Some Like It Hot often feels generic. Watching the opening “What Are You Thirsty For,” a snappy ‘20s pastiche that sets a tone which will be repeated multiple times, I had a flashback to “Wide Open Spaces,” a brilliantly satirical sequence from the underrated Kander and Ebb musical Curtains. That song is meant to parody the kind of flashy production number designed to disguise a lack of substance through a fusillade of manic energy. (I will say that NaTasha Yvette Williams is a knockout in the number, and she gives one of the two performances in SLIH that I think are truly star quality.) 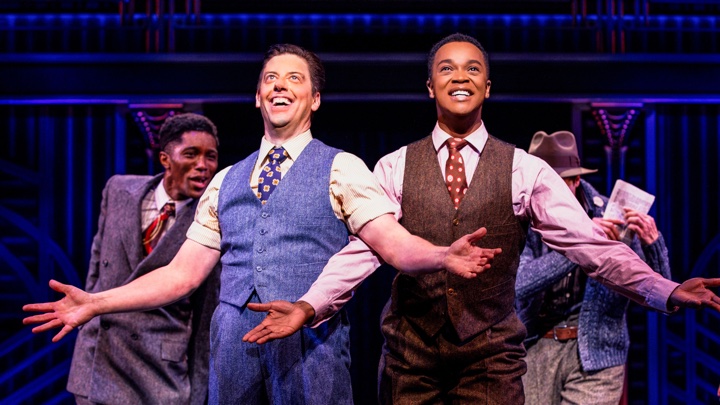 CK: The numbers themselves tend to be pastiche in terms of theme but not sound. Shaiman’s score establishes few musical reference points that truly evoke the music of the era, save for an overabundance of brass in the orchestrations, and the tunes rarely linger in your ears after a number has concluded. The lyrics largely fall flat—at least they do when they can be heard. As is regrettably common in contemporary musical productions, the performers and orchestra are overamplified to a deafening degree.

DF: Those ‘20s pastiche songs—of which there are too many—nevertheless do establish milieu: Prohibition, organized crime, and a kind of party-till-you-drop vigor. The character songs are trickier, notably Daphne’s “You Coulda Knocked Me Over With a Feather,” which reveals one of the key revisionist points in this adaptation, i.e., that Jerry’s assuming Daphne drag isn’t so much a disguise as a transformation, freeing his inner sense of self to take flight. The song is endearingly delivered by J. Harrison Ghee, who is the show’s other big discovery for me. It gets an enthusiastic ovation from the audience, as does a subsequent line about the importance of respecting everyone’s sense of themselves. But fine points as these are, they feel unearned here, in a show that lacks any emotional weight. Worse, much of this Some Like It Hot has previously been dined out on tired cliché jokes about drag.  You can’t play it both ways.

CK: Ghee is nonbinary and uses both “he/him” and “they/them” pronouns, and there is a palpable sense of authenticity in having a performer whose own personal background is reflected in the character journey here. In that sense, the conversation gets carried farther than it has in some of the previous works that have addressed gender performance within the context of a conventional Broadway musical—nearly all of which have been created by cisgender writers and directors. (That appears to be the case here, as well.) Despite that, I agree that the show wants to have its cake and eat it too: Daphne’s personal blossoming cannot undo the hoary attitude toward gender that is present throughout most of the show. And Ghee’s more subtle performance, and what they’re trying to communicate in terms of representation, only magnifies the crudeness of Josephine’s gender-bending being played for belly laughs. 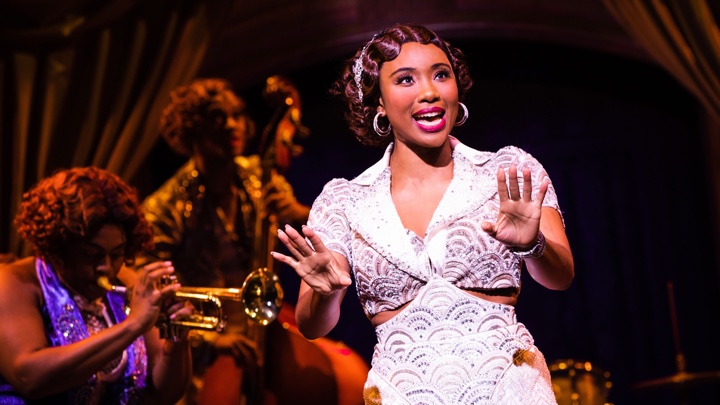 DF: Christian Borle, a decent singer and better dancer, exudes brash confidence, but in both Joe and Josephine modes, a big goofy grin is about the extent of his acting. I can’t make sense of what Kevin Del Aguila is trying to bring off as Osgood. Admittedly, he is saddled with some of the show’s weakest material, including what I assume is meant to be a surprise deeper sense of identity that doesn’t really make much sense. Del Aguila does dance up a storm, which is some compensation. Though this Some Like It Hot—and the Wilder movie also—structures Sugar almost as a supporting part in what is fundamentally a buddy caper comedy, her presence needs to be the heart and soul of the piece. The movie, of course, had Marilyn Monroe, in what is likely her most famous performance: Indescribably luminous, but more importantly, alongside the expected allure, she has a poignant sense of underlying sadness; her wonderful famous line that she can stop drinking whenever she wants to (but she doesn’t want to) always makes me smile, but also brings a lump to my throat. Here, the line earns a laugh but nothing more.

CK: That’s largely because the creative team hasn’t figured out how it wants to treat Sugar’s alcoholism. It’s both played for laughs and given a serious gloss—and at times, it’s elided altogether. Addiction can certainly be a bummer when you’re trying to put across a big splashy musical, but it’s not impossible. But another major reason why Sugar’s material so often goes for naught is that Adrianna Hicks, late of the still-running juggernaut Six, lacks much in the way of star quality. Even her entrance, which has been self-consciously staged by director Casey Nicholaw for applause, goes almost unnoticed. That’s a problem, and Hicks finds little in the way of charisma or natural comedy throughout the show. She sings well enough, though there’s nothing in her stylistic delivery to suggest period awareness.

DF: I’ll close by just saying that if you want to try one of this year’s big new musicals, I’d urge you to skip this and instead go for & Juliet, a captivating charmer of a show that uses a Shakespearean frame in a genuinely inspired way and makes with sincerity and conviction many of the same empowering points that SLIH tries. Plus, the cast is superb!