This is more than just a revival—it’s a reinvigoration of what I consider to be one of the best works of the last 50 years. 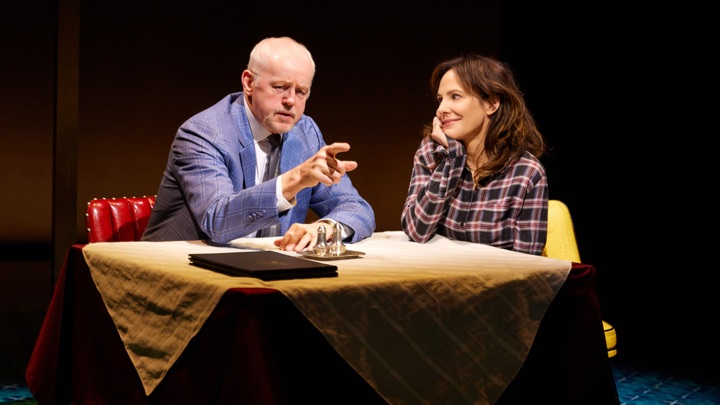 Cameron Kelsall: When it comes to theater, you can go home again. Paula Vogel’s How I Learned to Drive proves that adage doubly true. The 1997 memory play, a spiritual cousin to The Glass Menagerie, chronicles the traumatic but formative sexual awakening of a young woman in the mid-twentieth century, provocatively nicknamed Li’l Bit. (More on that later.) The structure of the story exists out of time, jumping back and forth from an implied present to a sympathetically rendered yet unromanticized past. It won Vogel the Pulitzer Prize for Drama—yet despite a healthy downtown run, it never made it to Broadway during its first flush. Manhattan Theatre Club is finally hosting the Main Stem premiere, 25 years later, and everything old is new again. In addition to hiring the original director, Mark Brokaw, the current staging reunites three of the original production’s lauded stars: Mary-Louise Parker, David Morse and Johanna Day. Needless to say, there are ways in which time has not stood still. How would the play come across when the text and the cast have a quarter-century of mileage under their wheels? Pretty damn well, it turns out.

David Fox: Yes, let’s start with the play. I was aware of it when it premiered, of course—in fact, a couple of my smartest students at that time were great admirers of it—but inexplicably, I had  not seen it till now. Kudos to Manhattan Theatre Club for bringing it back, which could not have been an easy choice. I’m not even thinking of COVID, which of course played its role in delaying the show’s return. Rather, it’s an issue of how much more of a flash point the subject of child molestation has become as we are more aware of it. Vogel has acknowledged the influence here of Nabokov’s Lolita, a brilliant work that I’ll bet has been dropped from many, many reading lists in the last few years. As we entered the Friedman Theatre, I wondered if there might indeed be a demonstration of some kind. But no—the audience was largely silent and clearly enrapt. It was a fitting reaction to one of a small number of genuinely great American plays of the last quarter century—and one whose stature has only grown with the passing years. To be clear from the start: Vogel is unequivocally critical of Uncle Peck’s predatory sexual abuse of Li’l Bit, who is not only a child, but also his niece. The years over which it occurred are seen as a prolonged and devastating period from which neither will completely recover. Yet in Vogel’s beautiful writing, How I Learned to Drive has wry humor, and even more astonishingly, compassion.

CK: At the risk of sounding like a Fox News talking-head—or present-day David Mamet (same difference)—I do remain unsure whether Vogel’s play would provoke more outrage if it debuted today, given that it steadfastly refuses to consider its powder keg of a topic in black and white terms. No one would argue that what the play depicts is proper, of course, but a large reason why HILTD is so memorable and moving comes from the genuinely sympathetic treatment that Vogel extends to all her characters, including the monsters. It also recognizes that even for survivors of childhood sexual assault, the lingering feelings are rarely so easily categorized as “bad” or “good.” Vogel takes a messy topic, one that is bound to make many viewers uncomfortable, and handles it with elegance and wit—all the while never obscuring the dark and disturbing elements of the story. What more can you ask of a playwright?

DF: For readers coming to HILTD for the first time, it would probably help to be somewhat more concrete about the story. I’ll tempt fate here, though I’ll also try to leave some major discoveries unrevealed. The play is structurally very fluid, moving seamlessly back and forth in time. Li’l Bit (Parker) is one of the two central characters as well as functionally a narrator, addressing the audience directly—as do other characters who are rather playfully referred to as a “Greek Chorus”. The prominent focus here are the years between ages 11 and 18 or so for L’il Bit—which is precisely the time when Uncle Peck is abusing her. The title is a metaphor, but not only that—indeed, the molestation takes the form of actual “driving lessons.” It’s both one of the wittiest aspects of Vogel’s play, and the most pointed: We become very aware of just how “male” the notions and terminology of driving have become. Peck is literally and figuratively in “the driver’s seat,” and ideas like “gear shifting” take on a very dark meaning.

CK: Vogel presents Peck not as a manifestation of evil but as a warm, caring influence for Li’l Bit—almost a father figure. I think it’s telling that in the published script, a casting note states that Peck “should be played by an actor one might cast in the role of Atticus in To Kill a Mockingbird.” Although now well into his sixties, Morse—tall and imposing, yet effortlessly trustworthy—still fits that bill entirely, and the calm, paternal demeanor he projects only muddies the waters further. It’s another brilliant choice on Vogel’s part to stipulate an actor like this for a role, which leaves the audience once again to detangle the true nature of the story from how it’s presented onstage.

DF: Morse’s performance is astonishing to me in its combination of quiet focus and infinite complexity and depth. But before saying more about the acting, I’ll also commend Mark Brokaw’s production—which as you say, is yet another return, since he directed it in 1997, though both scenic and costume designers are new here. There is an almost insocient level of bustle and energy around the central action, much of which is set up—physically and in terms of describing context—by that Greek Chorus, who include two chirpily charming young actors (Alyssa May Gold and Chris Myers, who are also new to this production). If this seems at odds with the gravity of the subject—well, that’s precisely the intent, I think. Much of the presentation of HILTD here has a sense of visual casualness: scenes are sketched in with minimal furnishings and props—the car itself constructed of two mismatched chairs, for example. Rachel Hauck‘s scenery is likewise deceptive in its barrenness, though the most prominent element, tellingly, is a bent telephone pole which certainly evokes multiple ideas.

CK: Despite the deep history that Brokaw and much of the cast bring to the material, this production is admirably not a rehashing of past glories. And I must admit that I worried slightly, in the beginning, that the magic might have been lost. The play opens with an establishing monologue from Li’l Bit, which finds Parker (now 57) in a high-key imitation of teenage excitability. I’d say this is a characteristic she brings often to her performances, but in those first moments here, it felt slightly arch in an off-putting way. Thankfully, to me, she mellowed out and adopted a more naturalistic mien for the rest of the play, and in the concluding scenes where Li’l Bit confronts the events of her past head-on, she’s devastating. It’s a good reminder though that given the structure of the script and how it plays with time, Li’l Bit can really be embodied by an actor of any age.

DF: I mostly agree with that, since as we’ve pointed out, the back-and-forth time sequencing means that none of the main actors will be the right age all the time. That said, though, I think for L’il Bit, it’s a particular challenge. Uncle Peck—as well as the third female character whom the script also calls “Greek Chorus,” but is presented most memorably as both L’il Bit’s mother and Uncle Peck’s wife—are seen at different ages, but always as adults. L’il Bit repeatedly crosses the threshold from child to adult. I agree that we’re very aware early on that Parker is working hard at this. Some of the problem, I think, is that her acting mannerisms have become more pronounced and familiar in the years since we first saw her work. She’s still effective, but the seams are showing. She falls into projecting a certain kind of trashiness that cuts the script’s effectiveness. Part of Vogel’s point, I think, is the absolute centricity of these people—not uppercrust, certainly, but not downtrodden either. This is Middle America in caps.

CK: I think you’re absolutely right that the family depicted is meant to be midcentury middle class, although the frequent references to Li’l Bit’s growing reliance on alcohol as a coping mechanism for what she’s endured would seem to explain her increasingly outlandish behavior. And it also makes a strong contrast to Uncle Peck, who is also an alcoholic but who lives with the disease in a more stoic, but no less destructive, manner. It’s one of the many ways that Vogel underscores a generational divide that’s at play here, which can also be seen in how Day and Gold portray Li’l Bit’s mother, aunt and grandmother at various points.

DF: Day was the big surprise for me—not a surprise that she’s superb, because I generally expect that from her, though she’s never had quite the big career splash that she deserves. Rather, it’s that I knew nothing about that character, and here she often virtually steals the show. I also think she finds exactly the right tone. For me, she and Morse are giving a priceless acting masterclass on the Friedman stage.

CK: And how fortunate we all are to be able to experience it. I was too young for HILTD when it first debuted, but I remember seeking it out at Lincoln Center’s Theatre on Film and Tape archives in college and being bowled over by it. I never imagined I’d have the opportunity to see the play with its original stars again, outside of perhaps a benefit reading. That they can be glimpsed eight times a week through the end of May is astonishing, and anyone reading this with even the slightest inclination to see it should go and buy a ticket. This is more than just a revival—it’s a reinvigoration of what I consider to be one of the best works of the last 50 years. Second chances rarely happen in a medium as ephemeral as live theater. To invoke the language of the play: don’t miss the exit ramp.