Only three years separate the creation of The Most Happy Fella (1956) and The Sound of Music (1959), but there’s a proverbial ocean between these two Golden Age musicals are being performed at prestigious festivals this summer. 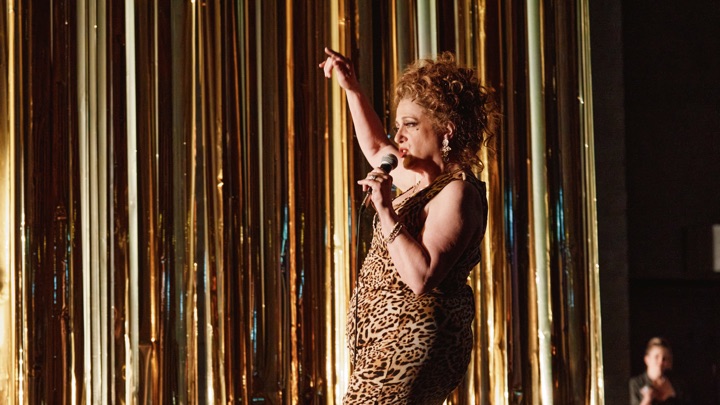 CAMERON KELSALL: We saw both over the span of 24 hours last weekend, David, and I think you’d agree with this study in contrasts. At Williamstown Theatre Festival in the Berkshires, director Daniel Fish follows his acclaimed, deconstructed production of Oklahoma with a similarly retooled interpretation of Frank Loesser’s American operetta. Fish abstracts the plot and reassigns the music to a company of seven women and nonbinary performers, resulting in a performance that values mood and style over narrative structure. Meanwhile, at the Glimmerglass Festival in Cooperstown, New York, Francesca Zambello delivers a stringently conventional take on Rodgers and Hammerstein’s final masterpiece, complete with picture postcard sets and a sweeping orchestra. Both stagings have their merits, and seeing them in close proximity threw into stark relief the debate over traditionalism versus innovation when reviving classic midcentury works. Yet I think it’s safe to say we had a clear favorite among these experiences?

DAVID FOX: Indeed, we did, and (spoiler alert) it’s the same one, so I’ll start with the loser… such as it is. Surely Sound of Music is no loser to millions of adoring fans of the film, with many sequences known by heart and recreated lovingly—if occasionally also with a deliberately campy overlay. There’s much to reinforce both sides, I think. The score remains enchantingly fresh and tuneful, really a parade of toe-tapping melodies and near-permanent ear worms. Yet the story—based in reality but also spun like cotton candy—looks pretty ludicrous at this point in time, if it didn’t 63 years ago. 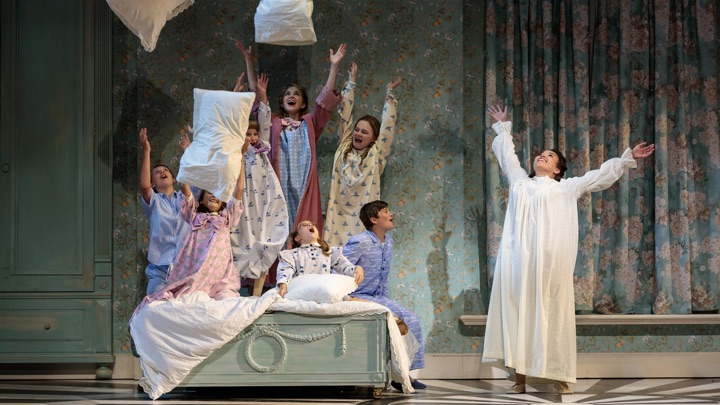 CK: There are, of course, numerous ways to underscore the relevance of the musical’s central message of perseverance and the courage of one’s convictions. Captain Von Trapp proudly cleaves to his Austrian heritage even as the Anschluss grows nearer, and there are moments throughout the show that feel eerily similar to our current, unsettled political moment. But Zambello, perhaps sensing an audience hungry for escapism, leans into nostalgia. Traditionalism is stamped onto every aspect of the production—scenic designer Peter J. Davison renders the Alps in quaint cardboard cutout, and costume designer Aleš Valášek sews up a steady supply of dirndls and lederhosen. The overwhelming sense is a trip down memory lane rather than the mirror image of an uncomfortable future.

DF: It’s worth pointing out that while the film was a blockbuster, the reviews of the original Broadway production weren’t entirely enthusiastic. Mary Martin fared well—the creative team of R&H and book writers Lindsay and Crouse not quite so much. My own view increasingly is a sense of bafflement that two of theaters most daringly innovative artists in the 1940s become so much less so in the 1950s. One can enjoy Sound of Music—I certainly do—but I can’t explain or justify its maudlin, sugary excesses, and the last ten minutes are so implausible that it’s nearly impossible to think of it as anything other than camp. I’d say that for better or worse, Zambello and company work on the principle of “Embrace the Kitsch.” And for the entire show, I waffled back and forth about whether that was a bad idea or an act of sheer genius. 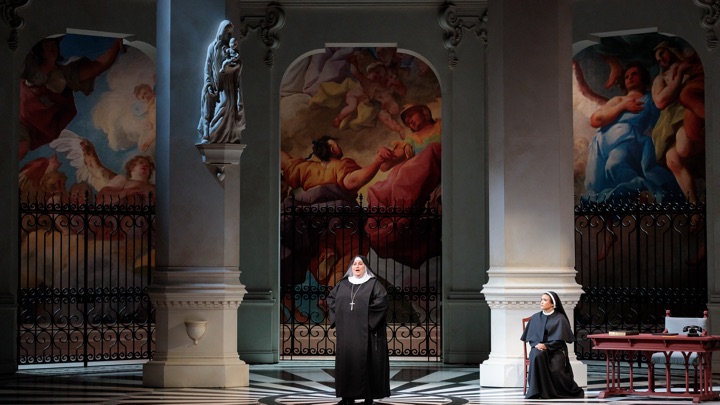 CK: By embracing the kitsch, they occasionally stumbled unintentionally into the camp. Some performers might have headed in that direction knowingly—how else do you reconcile the arch portrayals of Alyson Cambridge (Elsa Schraeder) and Peter Morgan (Max Detweiler)? Cambridge especially supplied a series of outsized line readings that would make any drag queen eat her heart out for their eyebrow-raising overstatement.

DF: Cambridge reminded me of Faye Dunaway… or (to be brutally honest) Lypsinka as Faye Dunaway as Joan Crawford. Few other performances are scaled so broadly, but there’s a smiling front-and-center delivery to all of them which I think is probably a directorial choice. It seemed to win the audience over, but to me it drained out any possible hint of complexity. Mikaela Bennett is an endearing and appropriately youthful Maria, but I got the feeling that she wrote “hoydenish” as a note above every single line in her script. Mary Martin—in her mid-40s when she opened in the show—was an improbable postulant in her Mainbocher habit, but as captured even in a limitedway on the original cast album, she imbued the piece with emotional truth. So did Theodore Bikel as the Captain, which here is played in two notes—morose and weepy—by Michael Mayes. In Bennett’s case, at least, the singing is some compensation, though her blue-chip instrument, which is capable of sounding very musical theater or quite operatic, doesn’t always meld the two ideally. Mayes sounds gruff and forbidding. 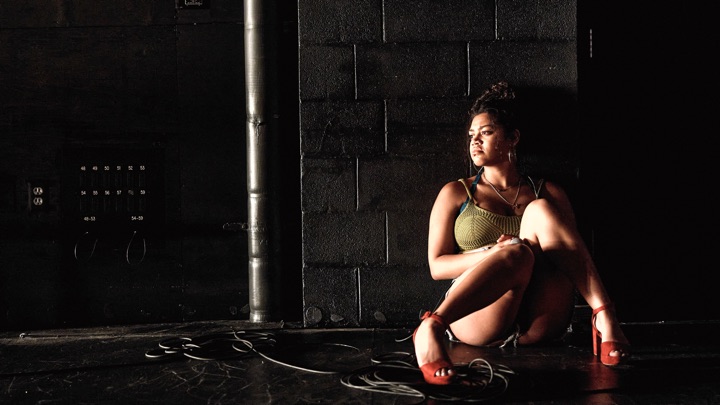 CK: Mayes and Alexandra Loutsion, as the Mother Abbess, both faced the problems often encountered by operatic singers shifting into the popular music idiom. In Loutsion’s case, a listener could sense a desire to transpose the lower-lying passages up a tone. The other nuns in the “How Do You Solve a Problem Like Maria?” quartet—Meryl Dominguez, Lisa Marie Rogali and Ashlee Lamar—sounded more like soloists than a well-blended group. For all the distinguished musicality these opera-trained singers should theoretically bring to the piece—and despite spirited conducting from James Lowe—the musical sum-total was ultimately negligible. Contrast that with Most Happy in Concert, as the Williamstown production is called, which features singers of varying ability, all of whom brought unique and memorable personalities to their assignments.

DF: I’ll just say it at the outset—I completely adored Most Happy in Concert. Truly, I would have been personally “Most Happy” to stay and watch it in its entirety a second time. Some explanation is needed about what it actually is. I’d call it a 70-minute distillation of Loesser’s monumental Broadway opera, which takes a particular notion at the original work’s core—mail-order brides—and builds a sort of fever dream around it, using much of Loesser’s score (though none of its dialogue) in a way that is absolutely theatrical yet also completely abstract. I took away from it that the seven figures—presented in quite boldly provocative costumes and presences—are connected in some way that they understand but we’re not meant to share. But even peeking into it in an almost voyeuristic way as we do, there’s a richness to their inner lives that sweeps us away, which nearly three hours of Sound of Music storytelling never did. Honestly, it’s ironic that Fish did such a radical rethinking of Loesser’s show, because I think it—unlike Sound of Music—actually has stood the test of time and feels absolutely viable today. But what Fish and seven astonishing performers deliver here is unforgettable. 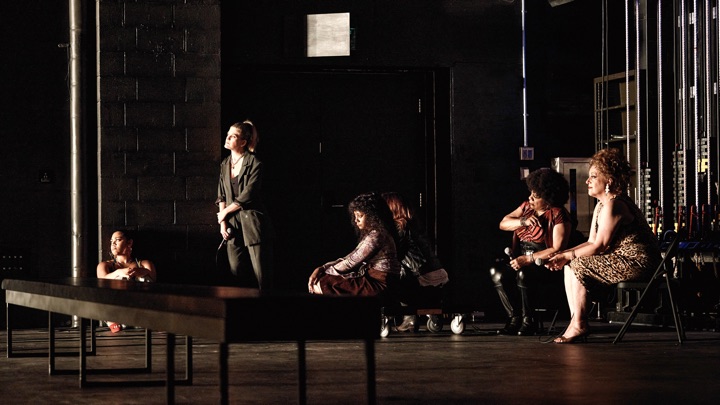 CK: As he did with the bluegrass-and-Americana twinged orchestrations for Fish’s Oklahoma, arranger Daniel Kluger creates a sound world that occasionally references the sweep of the original, but which folds in other styles—funk, techno, grunge, rhythm-and-blues—to create a singular musical language. Familiar songs take on new meanings. “Warm All Over,” shared by Kiena Williams (a shimmering soprano) and Maya Lagerstam (an angsty, arresting presence) is more wistful than plaintive. The kitschy “Abbondanza” sounds downright menacing as delivered by Mallory Portnoy—a true one-of-a-kind talent whom Fish has used to astonishing effect in multiple productions—and Tina Fabrique turns “Young People” into a soulful anthem. April Matthis renders “Joey, Joey, Joey” as a sultry torch song, and Erin Markey projects a sense of modish ambivalence throughout. After hearing Mary Testa belt the title song to the rafters, you could imagine casting her in a more standard production—there’s no doubt she’d sing and act Tony to the hilt. Throughout, Fish allows the individuated and interesting elements of each performer to shine through, and the result is an embarrassment of riches.

DF: Really, I agree completely across the board, and you’ve described the performers beautifully. It absolutely must get a cast recording, which is something I can imagine listening to in a loop for hours on end. I would be delighted if the show itself gets a long sit-down run somewhere—it certainly deserves it—though its generically uncategorizable oddness may make that unlikely, and this cast—around whom much of it is built—would be almost necessary. As for Sound of Music—I wish the Von Trapps best of luck with their 250-mile overnight trek to the Swiss border. Climb ev’ry mountain indeed!