Both the mise-en-scène and the musical direction amplified the absolute worst tendencies of the Opéra Comique’s Lakmé in the most tasteless and baffling ways. 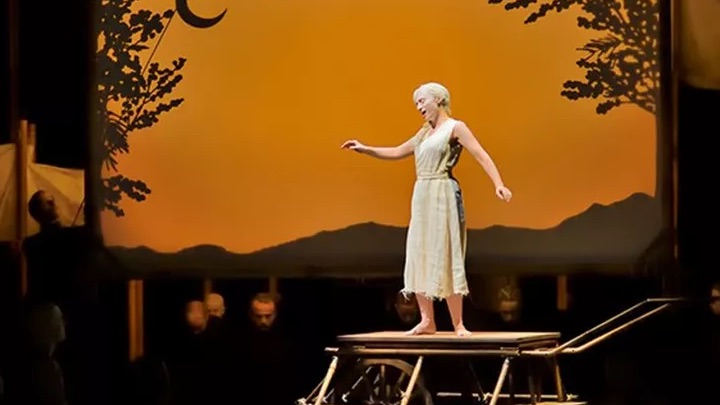 The Opéra Comique’s sold-out season of Lakmé seems to be the hottest ticket in Paris at the moment. With an eagerly anticipated new production by Laurent Pelly starring French diva du jour Sabine Devieilhe, tickets were difficult to come by.

Unfortunately, having managed to secure myself a seat at this event, I found Friday night’s performance to be both politically insensitive and musically messy (with a few notable exceptions). In short, both the mise-en-scène and the musical direction amplified the absolute worst tendencies of the original work in the most tasteless and baffling ways.

In the introductory music history course that I teach at Columbia, I like to begin by teaching Lakmé. Not because I think it’s a particularly good opera. But because it contains a number of famous set pieces that many students know out of context (the “Flower Duet,” the “Bell Song”) and because the context from which they originate is particularly horrendous.

An opera about the colonization of India, written in the wake of two devastating famines in the British colony (the Bihar Famine of 1873-4 and the Great Famine of 1876-8—both exacerbated by continued expropriation of crops back to the metropole), Lakmé rendered real colonial violence as trashy operatic spectacle.

It was a lurid and shameless cash-in on these painful colonial events, designed to commercialize them, exoticize them, and sell them to the Parisian public.

And what a flashy occasion it was! The original production (in the previous Salle Favart) cost 80,000 francs (over 7 million USD today), large portions of which was spent on jewels for Lakmé’s costume—a staggering amount, especially considering that the opera’s real colonial subjects were literally starving. 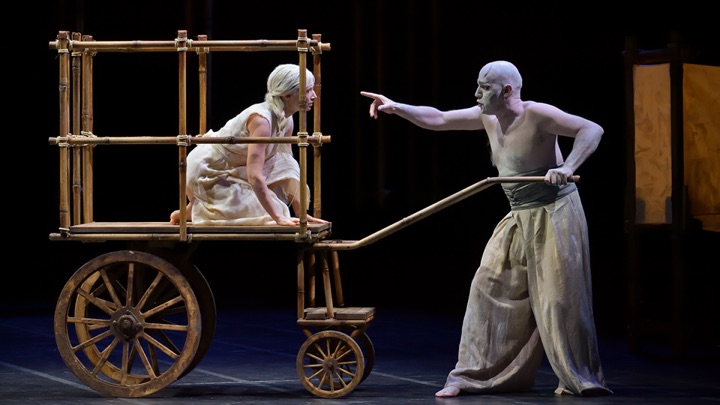 The ultimate message of Lakmé is that the colonization of India is ultimately justified: that that a colonizer’s duty to the colonial goals of his homeland must trump any feelings he has towards the colonized, and that any cultural miscegenation between colonizer and subaltern is inevitably doomed.

At the close of the opera, Lakmé martyrs herself to ensure that the smooth work of colonization can continue (“Sa patrie à ses yeux s’est dressée!”), playing into the imperial fantasy that the colonial project was in some way noble or sanctified.

I made the mistake of attending the pre-concert talk before Friday night’s performance. One of the speakers insisted that the opera was a “true” and “beautiful” depiction of Hinduism at the time.

The problem is that I’m not sure that even the opera’s creators, Léo Delibes and Edmond Gondinet, would argue that the opera was a “truthful” depiction of anything.

The opera is based on a best-selling semi-autobiographical novel by the real-life colonialist, naval officer Pierre Loti and was set in Tahiti, which was (and remains) a French colony. His “Lakmé” is named “Rarahu” and is known in Tahiti for her ability to sing “an endless variety of bird-like tones, some strident, some as soft as a linnet’s note, and going up, up, to the highest note of the scale,” thereby providing musical inspiration for Delibes’s score. 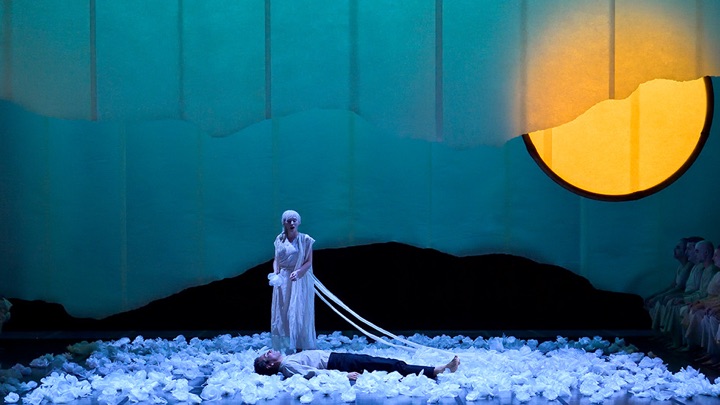 For political reasons, Gondinet and Delibes decided to move the setting of the opera from French-occupied Tahiti to British-occupied India. In this way, the opera would not directly address the tensions and difficulties of life in the French colonies, instead transposing these potentially thorny issues to a British colony.

Issues of cross-racial desire, of colonial unrest, and of martial desertion would not only be easier to get past censors, but they would also be more palatable to the Parisian public if they were placed in a British colonial context rather than a French one.

India was, in many ways, an obvious choice. France had battled with Britain over control of the colony over a century prior and, as a result, still had colonial enclaves in the region (most notably at Pondichéry, Karaikal, and Mahé) which were economically threatened by the British colonial regime. An opera about a British colonist destructively giving in to forbidden desires would, therefore, not raise any eyebrows. (Also throw into the mix the creators’ fascination with exoticist literature, particularly, Théodore Pavie’s “Les babouches du Brahmane”).

There is another anecdote (unverifiable, of course) that Delibes and Gondinet chose India for botanical reasons: the authors allegedly had decided that Lakmé poison herself by chewing a leaf and, having researched a number of poisonous plants, decided on datura stramonium (which is, indeed, named in the stage directions). They purportedly chose to set the intrigue in India because they believed that this was where datura stramonium was native.

Either way, it is clear that Gondinet and Delibes were more concerned that the opera simply have an exotic setting than about the cultural specificity of the setting itself. “Truthfulness” very much took a back seat to political, commercial, and aesthetic concerns.

Delibes’s score is a crazy mish-mash of styles and owes very little to Classical Indian music. The famous “Flower Duet” is perhaps a prime example of this: it is famously a barcarolle—a gondolier song, to match the river that Lakmé and Mallika describe—catering to a fashion for the form in the early Third Republic.

Even critics at the time picked up on the vague cultural attitudes of Delibes’s opera. Henri Blaze-de-Bury, writing in the Revue des Deux Mondes, slammed the opera’s aimless exoticism:

Another orientalist, but a much less convincing one, is Mr. Léo Delibes—a second-rate orientalist—more of an excursionist, shall we say. Through him, we enter the orientalist fantasy of a Parisian muse: don’t ask much more fundamental truth from Lakmé’s score. It’s the same old conventional art—subtle, delicate, skillful, decorous, ornamented according to the prevailing taste. English or Chinese India? Let us not labor this detail!

“Second-rate orientalist” might also describ Pelly, whose neo-primitivist production expounded the generic, gaudy exoticism of Delibes’s opera in a way that only reinforced the racist message of the opera’s creation: it doesn’t matter how we represent the subaltern as long as we represent them as barbarians.

Pelly’s Brahmins are covered from head to toe in white dust, as if they have been rolling on the ground; their hair is matted and dirty; they wear simple calico tunics. The set is made of bamboo and papyrus, with a few origami flowers scattered here and there. Everything was pared down, simple, a little bit gritty. And crucially, none of these elements suggested one particular culture, instead gesturing towards the “orient” in general.

True, this has none of the orientalist opulence of the original 1883 production. But the message is just as disquieting. Pelly has instead gone for a “noble savage” stereotype here, in which the exoticized ars povera of his Brahmins—a kind of vague orientalist minimalism—is presented as an object of Western desire.

On top of this uniquely racist aesthetic, there were, of course, a number of hackneyed racial stereotypes. Pelly’s Brahmins spent a lot of time crouching, kneeling, or otherwise bending over—postures designed to underscore their “otherness.” Worse still were the fake “ritualistic” hand gestures that were liberally dotted throughout the staging.

But by far the most bizarre element of the production came during the so-called “Flower Duet.” As Mallika (Ambroisine Bré, a warm, understated performance) undressed Lakmé of her manifold jewels, various attendants entered to receive the trinkets—all wearing black burqas.

Given the difficult history of this garment in France and the disturbing rise of French Islamophobia, this struck me as politically insensitive. And it was a bizarre choice given that the opera purportedly depicts a Hindu region of British India.

Raphaël Pichon, leading the Pygmalion orchestra, offered a musical interpretation of Delibes’s score that was just as messy as Pelly’s production. The orchestra was plagued with intonation issues from the very beginning—especially in the woodwinds and strings. Fast, loud unison passages in the strings exposed much indecision around tuning; the score’s moments of Wagnerian dissonance were often harmonically incomprehensible.

There were also a number of timbral mishaps—squeaks and squawks from various woodwinds—and some coordination issues between chorus and orchestra towards the beginning of the opera.

These difficulties do not necessarily make for a dissatisfying performance. But Pichon’s conducting simply felt slapdash. Everything seemed rushed—not in a way that created a sense of urgency, but in a way that made me feel like it all went by too fast to be worth listening to.

And there was so little color, so little variety: I’d have liked this rather hurried, monotonous excursion through Delibes’s score to have more dynamic shade, more textural interest, more attention to detail.

Fortunately, Devieilhe brought a touch of nuance to her performance of the title role. Her voice had a bell-like clarity, especially in the lower and middle registers, where every word was perfectly audible and the tone clean and sparkling.

Devieilhe made much of the lyricism of Delibes’s heroine: the various wordless vocalises that pepper the score were delivered with crystalline elegance, while her cantabile arias (“Sous le ciel tout étoilé,” in particular) were deliciously finely spun. And if the very top of her voice could be a little pallid and overly bright, a supple, delicate coloratura added a sense of freshness to the “Bell Song.”

However, the role of Lakmé is not all gorgeous glassy lyricism, and I often felt that Devieilhe’s voice and stage presence got lost in the role’s more dramatic moments: at the end of the first act when Lakmé begs Gérald to leave; or just before she takes the poison and she confronts Gérald about his changed countenance.

Here, Delibes’s heavier orchestration often overpowered the soprano, which, in combination with Pelly’s blocking, often made her Lakmé seem even more helpless and devoid of agency than one might expect.

Frédéric Antoun’s Gérald was also no match for Délibes’s orchestra: the surging romanticism that underpins Gérald’s arias invariably swallowed up this rather light voice. To me, Antoun’s voice felt a little too covered, a little too guarded for the role, only occasionally opening up into a full, bright tenorial sound, preferring, instead, a safer, sweeter quasi-falsetto.

The role took an obvious toll on Antoun’s instrument. The ends of phrases (especially unstressed vowels) were often swallowed, as if he were running out of breath. Towards the end of the performance, he began to “mark” some passages.

The true star of the evening was Stéphane Degout, whose Nilakantha was a commanding presence in an otherwise muddled production. His was a large sound, tooled into a fine instrument by a brightness of tone and a clarity of resonance, especially in the upper register.

His “Lakmé ton doux regard se voile” was absolutely glorious—simultaneously tender and forceful. For me, it felt like one of the few moments of genuine dramatic expression in a performance that ultimately left me cold and rather unsettled.

Thrust into the political spotlight