Thrust into the political spotlight

The Met’s revival of Turandot on Saturday night was surprisingly contentious. 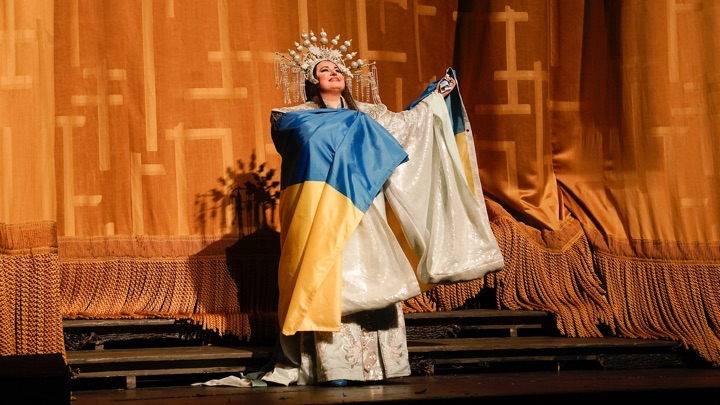 Franco Zeffirelli’s production of Puccini’s opera may be one of the oldest and most frequently resurrected in the Met’s repertory; yet it has been thrust into the political spotlight by the Met’s decision to drop Russian soprano Anna Netrebko (previously slated to sing the title role) in favor of Ukrainian Liudmyla Monastyrska.

Ostensibly, the Met turned its back on its former prima donna assoluta for “not complying with the Met’s condition that she repudiate her public support for Vladimir Putin while he wages war on Ukraine.”

The soprano publicly endorsed the election of Putin in 2012, calling him a “very attractive man” and praising his “strong, male energy.” And despite her stated opposition to the war in the Ukraine, she has previously donated to separatist causes and branded those in the West who opposed the war “human shits.”

The decision to replace Netrebko with Monastyrska seems like a symbolic move on the Met’s part, an artistic endorsement of Ukrainian nationalism over Russian belligerence. Indeed, Monastyrska took her curtain call draped in the Ukrainian flag.

At the same time, Monastyrska is far from an unknown quantity: she is a star in her own right, with an illustrious career divided primarily between La Scala, Deutsche Oper Berlin, and Covent Garden. She made her Met debut as Aida in 2012 to critical acclaim. Symbolism aside, there were shrewd artistic and pragmatic motivations behind the Met’s decision to bring in Monastyrska for this role.

Full disclosure: I think Netrebko is a magnificent singer, and I’ve said so many times on here. However, I also think she should have been fired years ago. Netrebko has been a flagrant racist, prone to gaffes and controversy.

Rather than presenting the Met as a site of moral integrity, this entire episode has revealed just how weak the Met’s systems of political accountability truly are. Artists like Anna Netrebko can endorse warmongering dictators for years, can endorse predators like James Levine, can endorse racist practices like blackface, and they can get away with it too.

And yet, the Met has capitalized to no end on their booting of Netrebko and their support for the Ukraine. In the gift shop they sell little magnets that say “Cancel Putin, Not Pushkin,” a slogan seemingly coined by Peter Gelb himself in an interview with the Guardian. Of course, Pushkin’s poem, “Poltava” (the basis for Tchaikovsky’s Mazeppa), was written to support the dismantling of Ukrainian statehood under Tsar Nicolas I, a political maneuver that laid the foundation for Putin’s invasion of the Ukraine today.

These magnets epitomize the Met’s inconsistent and hypocritical attitude toward the Ukraine invasion, which has seen the company stage Tchaikovsky’s Eugene Onegin (another Pushkin adaptation) in the midst of the war on the Ukraine. All of this after having backed Netrebko’s pro-Putin stance for nine years before making a sudden volte face in the face of changing public opinion.

This is not to say that the fundraising and awareness-raising efforts that the Met has undertaken around the Ukraine invasion have not been impressive: they have been very noble indeed. But rather that the same moral code that the Met applied in parting ways with Netrebko should be applied consistently across its programming, and not just in certain reactionary circumstances.

The Zeffirelli production of Turandot would be great place to start—a racist production of a racist opera, directed and designed by a long-time member of Italy’s corrupt Forza Italia party. When Zeffirelli continued to support and house Silvio Berlusconi in the wake of his conviction in 2013, the Met might have taken that as an opportunity to condemn and withdraw this abominable Turandot.

But, politics aside, this was a rather undistinguished Turandot. Monastyrska’s much-hyped appearance turned out to be altogether underwhelming. The soprano, who, in a recent New York Times profile, expressed misgivings about taking on such a big role, did, indeed, seem to be treading rather lightly.

What began as a particularly nuanced and restrained “In questa reggia” wound up feeling muted, meandering, and indistinct: the silken pianissimo that opened the aria was especially exquisite, but it never bloomed into the sweeping musico-dramatic peaks and troughs that the aria demands.

Indeed, the high, soaring phrases that comprise much of Turandot’s second-act music were dispensed cautiously, even clinically, rarely swelling beyond a modest mezzo-forte. It was a portrayal that lacked passion, color, or edge—barring those rare moments when Puccini’s orchestration allowed Monastyrska to spin a shimmering pianissimo line.

Monastyrska fared better in the third act: the final duet allowed her to open up vocally, particularly in the upper register, which had a beguiling brightness when left to freely resonate. However, her voice also showed signs of strain—notably, a wide, slow vibrato just north of the passaggio during louder passages.

Monastyrska appeared awkward and uncomfortable in Zeffirelli’s production, especially while contending with his highly stylized blocking, aggressively raked stage, and ridiculously boxy costumes: all the little ceremonial gestures that Zeffirelli builds into Turandot’s part were rendered in a rushed and stilted manner, as if Monastyrska were eager to be done with them as quickly as possible.

Monastyrska certainly brought a number of interesting and original ideas to her interpretation of Turandot: I liked the hushed intensity that she brought to many of the princess’s public declarations (including her final “Il suo nome è ‘Amor’”). However, I also felt that this was far from the ideal role for the soprano—that her talents would be better appreciated in lighter repertory.

If Monastyrska’s Turandot was all too subdued, Yonghoon Lee’s Calàf had the opposite problem. Lee delivered a powerful, energetic, radiant, stentorian rendition of the opera’s hero, pumped full of resonance and squillo.

It was a performance marked by brazen, searing intensity and seemingly boundless force: indeed, it was often Lee’s Machiavellian gusto that was the driving engine behind this otherwise pedestrian revival—his propensity to leap unabashedly around the stage, to gesture grandly to his audience with utter abandon.

However, the performance was a little too brash, a little too showy for my liking. It often felt like sheer vocal power was taking precedence over vocal artistry or musical elegance. I pined for some moments of nuance, of contrast, of respite from Lee’s “one-note” show of strength (I found similar fault with Feruccio Furlanetto’s Timur).

Moreover, it was often difficult to make out Lee’s words, especially in his (particularly brilliant) upper register: this lack of articulation did not aid the feeling of vocal monotony, rendering Puccini’s phrases as homogeneous walls of sound, rather than distinct dramatic utterances.

When Lee did put the brakes on his performance, the voice often lacked the kind of color and warmth that it possessed in the fortissimo passages. His “Nessun dorma” didn’t initially draw me in, the aria’s gentle opening phrases simply coming off as muddy or non-committal rather than tranquil or anticipatory.

The true star of the evening was Ermonela Jaho, whose Liù was a musical and dramatic revelation. Jaho brought a welcome air of maturity to the role: there was the sense that Liù was not merely a girl with a crush on Calàf, but a woman hellbent on protecting him.

Her interpretation was marked by a warmth of sound and a depth of feeling. The low register was rich but not overly weighty, the high register clear but rounded and not overly piercing—both connected by a sumptuous, velveteen middle register.

“Signore, ascolta” was absolutely showstopping—each phrase so delicately crafted, each mezza di voce so gracefully executed. The aria had a shimmering vulnerability while also tapping into something more earthy, more grounded: Jaho occasionally brought the dark, plushy quality of her lower register up into higher passages, endowing them with a welcome sense of gravitas.

Jaho’s death scene was equally sublime. Fluttering portamenti and tastefully sculptured legato lines made for a unmitigatedly Puccinian experience. But, above all, Jaho delivered a naturalistic performance of Liù’s suicide—one that made her sacrifice feel distinctly believable.

Ping, Pang, and Pong—played by Alexey Lavrov, Tony Stevenson, and Eric Ferring respectively—were a little too undercooked for my taste. The rather understated vocal performance delivered by these three singers on Saturday evening seemed altogether at odds with the outsized commedia dell’arte gestures that Zeffirelli gives their characters.

The political controversy surrounding this revival seems to have resulted in a sold-out opening night for the Met. However, this was ultimately business as usual for Met as they staged yet another unremarkable attempt at breathing life into Zeffirelli’s tired racist pageantry.