At the heart of this success was Quinn Kelsey’s revelatory take on Rigoletto. He was matched, vocally and dramatically, by Rosa Feola’s Gilda—a tour-de-force performance. 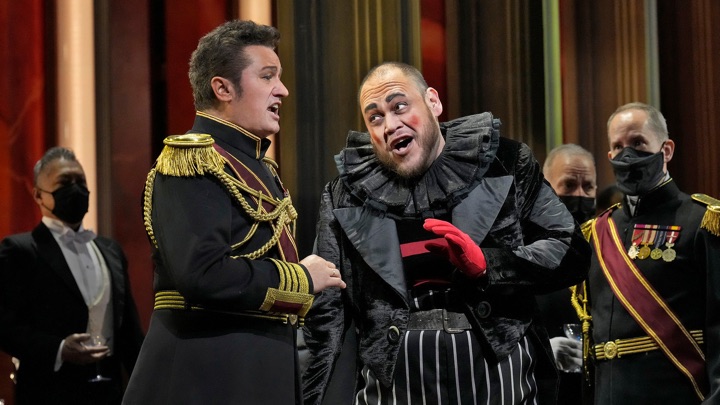 2021 has sucked. What was supposed to be a great return to normal (and crucially, a return to live opera) has ended up looking a lot more like a return to 2020 as omicron sweeps through New York City. I think many are looking ahead to 2022 with trepidation rather than excitement.

It was gratifying (cathartic, even) to ring in the new year with an utterly electrifying performance of Rigoletto at the Metropolitan Opera.

The cast delivered an impassioned, daring, no-holds-barred rendition of Verdi’s opera, that delved fearlessly into the darkest recesses of the work.

At the heart of this success was Quinn Kelsey’s revelatory take on the title role.

Kelsey found depth and humanity in Verdi’s antihero, eschewing tawdry melodrama or operatic grotesquery to plumb the gripping psychological drama at the heart of the opera.

At the core of Rigoletto’s character is the contradiction between his sincere love for his daughter and his boiling hatred of the corrupt world in which he lives (and in which he has made himself complicit): he allows his desire for revenge to jeopardize, and ultimately destroy, the one thing he cares about the most. 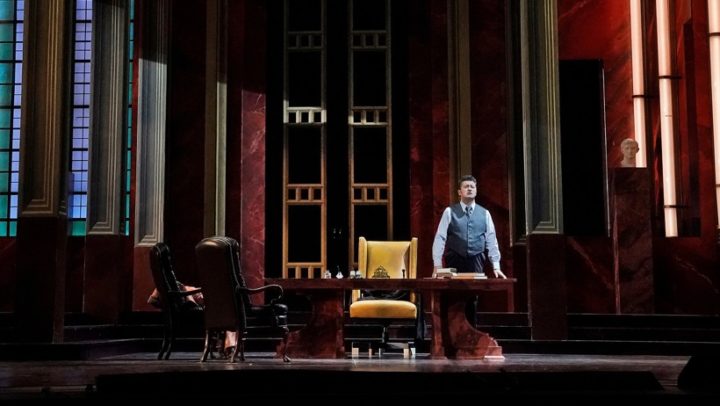 I must admit that I’ve always found this a little contrived: as if Piave, the librettist, writes two different Rigolettos—on a doting father, the other a vengeful social outcast—and never fully integrates them into one cohesive character. I never truly understood how Rigoletto could both love Gilda dearly while keeping her imprisoned and generally tormenting her.

But Kelsey found a way to make both the paternal and the violent impulses seem not only deeply genuine, but also closely connected.

I got the sense that Kelsey’s Rigoletto cherished Gilda so much precisely because she is the only thing in his life that is untainted by corruption and vice, and that he rails against this world precisely because it threatens this last modicum of purity. Kelsey exposed the selfishness and hypocrisy of this doomed attempt at second-hand moral preservation while also making it believable, understandable, pitiable, and even relatable.

This is a lot of nuance to fit into one character. Kelsey partly achieved this through his magnetic stage presence – the baritone had a fiery, manic, slightly tortured look about him which was almost impossible to look away from – but also through a riveting vocal performance that was at once forceful and subtle.

Kelsey’s voice had a gruff, biting edge to it, particularly in the first act. He roared through his Act I monologues with uncompromising force, only turning down the intensity in his duets with Rosa Feola’s Gilda, which had an aching poignancy.

But it was in the second act that Kelsey made his most interesting and compelling vocal choices. Even when railing against the courtiers, Kelsey was curiously gentle, his voice laced with a certain sweetness that betrayed his character’s vulnerability. 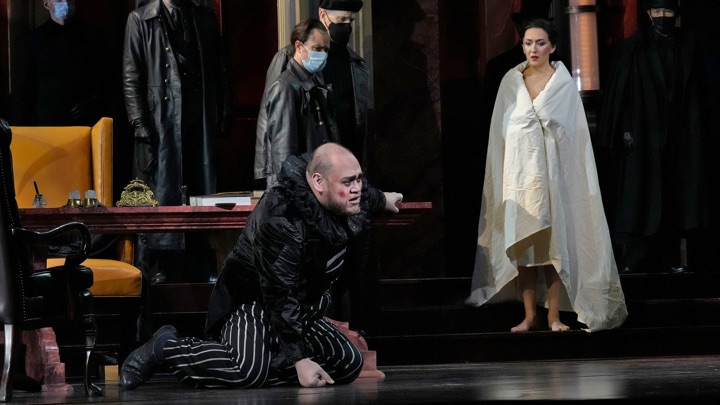 In his “Cortigiani, vil razza dannata,” Kelsey revealed a tender, sonorous upper register—at once sumptuous and haunting—while his duet with Gilda in the same act was notable for its unnervingly icy pianissimo.

He was matched, vocally and dramatically, by Feola’s Gilda—a tour-de-force performance that was every bit as creative and nuanced as Kelsey’s Rigoletto.

If Kelsey’s performance was marked by its fragility and volatility, Feola’s was characterized by an earthy, honest strength. This made for an absolutely exhilarating dynamic when both singers shared the stage: Kelsey, the rapidly imploding father, and Feola, the fast-maturing daughter.

Feola exhibited a piercing, white-hot upper register—not necessarily ideal for the coloratura but perfect for Gilda’s more dramatic moments. But Feola truly sang at her best in her rich, sonorous middle register, which was full of color and buoyancy.

Feola had a particularly stylish way of shaping the musical line: lyrical phrases could feel delightfully conversational while recitativo passages soared with lyrical elegance. It was a performance that was never overcooked, and yet it constantly kept me on my toes, always making me want to listen closer, to catch each vocal twist and turn.

Her showstopping “Caro nome” avoided the ditsiness that so often comes with this aria in favor a more grounded, determined take, rooted in the lustrous middle of her range. A particularly weighty rendition of “Tutte le feste al tempio” was matched by some exquisitely poised and musically sophisticated lyrical singing. 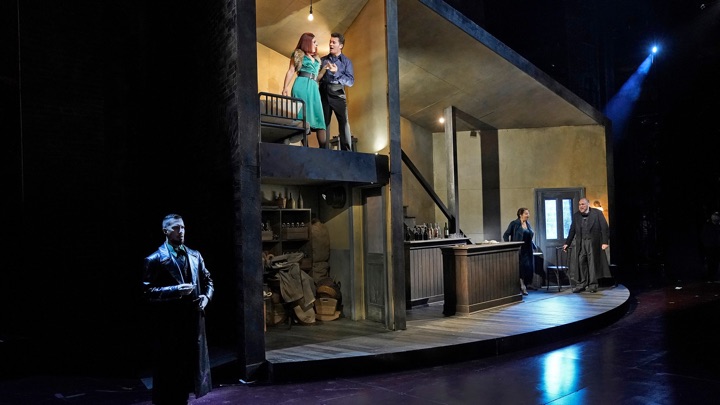 But it was her death scene that proved most touching: Feola managed to sound like she was dying without sacrificing the beauty or the integrity of the musical line.

Piotr Becza?a was in fine voice as the Duke of Mantua—his high notes bright and brilliant, his low notes lush and resonant. A full-bodied, crowd-pleasing rendition, Becza?a’s Duke delivered oodles of sumptuous bel canto magic, even if it could feel a tad too heavy at times.

Beczala really is a very loveable performer. Every time I have seen him, he has sung with an earnest passion and a germane, puppy-dog charm. I often wondered if he was a bit too loveable as the Duke of Mantua.

Frankly, I wanted his Duke of Mantua to be more of an asshole. Beczala left those darker, more unsavory, more dangerous facets of the Duke’s character largely unexplored, choosing instead to portray the character as a consummate romantic—as if his womanizing was somehow a side effect of his hot-blooded romanticism.

But this is a minor quibble in an otherwise deeply satisfying performance.

But Becza?a did a splendid job of finding variety and contrast within these numbers without sacrificing the tenorial fireworks. I particularly enjoyed those moments when Becza?a “took his foot off the pedal,” ushering forth the softer edges of his voice. 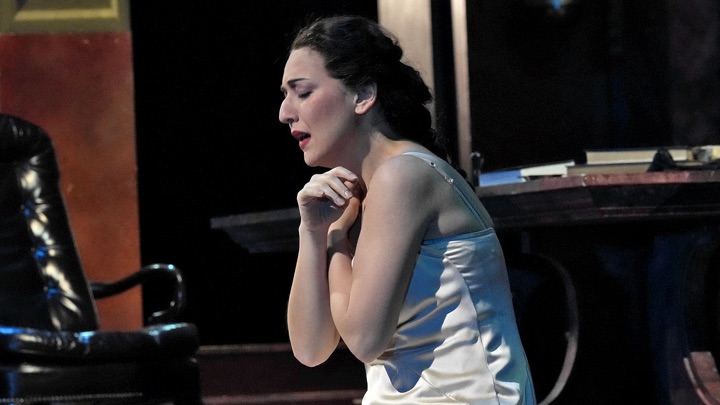 Andrea Mastroni’s Sparafucile was notable not for his low notes, but for a sweet, seductive upper register—at once supple and sonorous. It was the perfect match to Varduhi Abrahamyan’s Maddalena, which had a muscular, stentorian energy.

The singing was well supported by conductor Daniele Rustioni, whose fresh, energetic take on Verdi’s score afforded such strong, creative performances from the cast.

The Met Orchestra seemed to respond enthusiastically to Rustioni’s conducting: they sounded particularly full-flavored on this evening—particularly the brass, which gleefully sneered through the caustic dissonances of the overture. The strings had a particularly raspy flavor at times—perhaps a certain hint of sul ponticello—that perfectly underscored the darkness of the dramatic material.

But it was the more soloistic work that truly stood out for me: the anguished horn calls which interpolate the first duet between Gilda and Rigoletto; the flurrying woodwind arpeggios which represent the storm in the third act; and the offstage band (partially onstage in this production), which played with a shimmering, glistening quality.

The costumes, by Catherine Zuber, had a 1920s feel to them (although Maddalena seemed to have been dressed as Mrs. Slocombe from Are You Being Served)—but nothing about them screamed “interwar Germany.”

Indeed, if I hadn’t been told in the opera’s pre-run advertising that it was set in the Weimar Republic, I could have easily thought it set in pre-Depression America, or pre-Franco Spain, or even a costume party in 2021.

The Weimar Republic was the era of jazz, of dada, of expressionism, of epicureanism, of cubism, of Bauhaus, of Marlene Dietrich, of Ernst Krenek, of Fritz Lang, of Theodor Adorno, of Rudolf von Laban, of Thomas Mann, of Bertolt Brecht. Sher’s production was not only unworthy of this artistic legacy, but failed to represent this vibrant cultural context in its milquetoast aesthetic palette.

On top of this, there were a number of aspects of Piave’s libretto that simply didn’t make sense in Sher’s production: the Weimar constitution famously declared that all Germans were equal under the law, ceased to legally recognize noble titles, and stripped nobility of all legal privileges. So why is there a Duke—holding court with his jester and issuing execution decrees—in Sher’s Weimar-inspired production? And why is the court jester so scared of an old man’s curse in this increasingly secular Germany?

Victor Hugo’s play was famously set in Renaissance France. Sher’s production struggles to detach itself from these feudal origins even though Mayer’s production, to my mind, did so with relative ease.

The sheer genericness of Sher’s production might have been more palatable were it not for the overriding sloppiness of the staging. The giant revolving set seemed to move almost at random, distractingly rotating to reveal a new interior mid-scene and even mid-aria.

Moreover, Sher had an annoying habit of assigning the most interesting blocking to those characters who are not singing. Characters would bustle around the stage, upstaging each other, while other characters were soliloquizing. Gilda made her big entrance in the second act in the middle of Rigoletto’s big cadenza, completely drawing attention from Kelsey’s (rather outstanding) performance.

Notably, the production lacked any sense of intimacy. Duets were often sung while characters were in two different rooms of the production’s various cutaway sets. Rigoletto and Gilda spent most of the first act singing at each other from different levels of Rigoletto’s multistory apartment. Gilda and the Duke sang a large portion of their Act I duet on either side of a wall—like Pyramus and Thisbe, only less romantic.

Then there were just some baffling directorial choices: Gilda is already inside Sparafucile’s tavern when we hear the sound of her knocking on the door; Rigoletto claims the door to the tavern is locked and then walks through the door moments later.

At one point, the slightly slipshod nature of Sher’s production posed a literal physical threat to its cast: a ramp collapsed onstage while Feola was being dragged along it in a body bag (Kelsey later kicked the ramp out of the way, sparing the cast of further injury).

Fortunately, the opera’s cast lit up an otherwise dull and perplexing production: if the new production isn’t worth seeing, these singers certainly are.