With the phenomenal cast that stacked Paris Opera’s production of I Capuleti e i Montecchi , it was easy to overlook the quirks of Bellini’s opera and get lost in the pleasures of glorious bel canto singing. 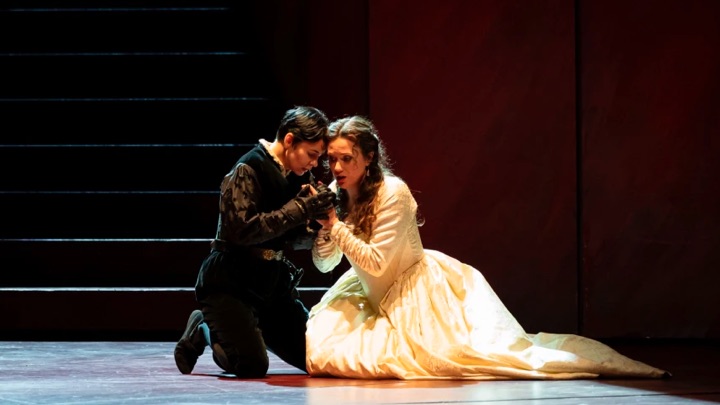 Bellini’s I Capuleti e i Montecchi is so comically far removed from Shakespeare’s treatment of the story that it often seems like a crude operatic parody of that play.

When I saw the opera for the first time at the Bastille on Friday night, I almost guffawed when Giulietta wakes up mere moments after Romeo takes the deadly poison (talk about bad timing!), only for the two to sing a very long duet as the poison courses through Romeo’s veins.

But with the phenomenal cast that stacked Paris Opera’s production, it was easy to overlook the quirks of Bellini’s opera and get lost in the pleasures of glorious bel canto singing. Indeed, the cast, led by Ana Goryachova and Julie Fuchs as the star-crossed lovers, gave a gripping, energetic (and ceaselessly beautiful) performance of Bellini’s demanding score.

Goryachova possessed both the supple, resonant low register and the bright, clarion upper register necessary for Bellini’s Romeo, a trouser role that demands equal parts heroism and tenderness from its singer (indeed, Goryachova’s characterization very much captured the hot-bloodedness of the young Guelph).

A rich, velveteen quality and a remarkable evenness of tone throughout the range were well-suited to the role’s coloratura, allowing for an approach to phrasing that felt luxurious and expansive.

Fuchs’s Giulietta was darker and heavier than one might expect for such a lyric role; but this weightier color only created a welcome blend with Goryachova’s velutinous Romeo. The lower and middle registers, in particular, were warm and flexible, easily portraying Giulietta’s (seemingly limitless) despair, even if the upper register had a slight tendency to harshen. 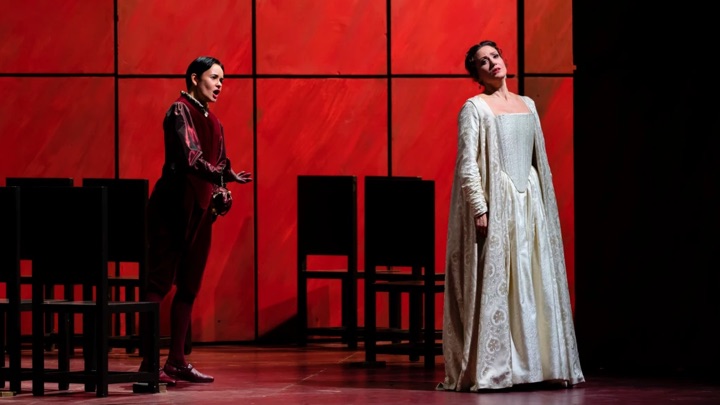 Fuchs had a marvelous ability to find the innate drama in Bellini’s melodies (and he gives so many of his best to Giulietta!): little turns, trills, runs, or even sustained notes felt like they contained some hidden meaning for the doomed heroine, as if she were desperately trying to communicate some intimate subtext.

Tebaldo’s Act I cavatina and cabaletta, fervently sung by Francesco Demuro, was the highlight of the evening for me. Demuro’s voice was bright, penetrating, oozing with squillo, and just a little bit piquant in quality – an acquired taste, perhaps, but perfect for this repertoire (which requires clarity and precision in the coloratura) and ideal for the villainous Tebaldo.

The musical success of this production owes much to Speranza Scappucci, who, in her Paris Opéra debut, led the orchestra in a triumphant rendition of Bellini’s score. Scappucci generally kept the orchestral gestures light and brisk, rarely getting bogged down in the romanticism of Bellini’s score (the overture, especially, proceeded at breakneck pace – as a series of airy, fleeting tableaux).

And yet, she also knew when to take a backset and give the soloists leeway: The horn solo which opens Giulietta’s cavatina had a delightfully spacious quality, providing a welcome respite from the intensity of the drama.

I have noticed an unfortunate trend in recent operatic productions: The opera will be performed in period dress (or at least in clothing that vaguely gestures towards the time and place in which the opera is set) while the set will be some kind of post-minimalist abstraction (big bare walls, lots of empty space, with a few choice set pieces that gesture towards the original mise-en-scène).

These productions are usually relatively traditional, unimaginative stagings of the operas in question (they may throw in a splash of contemporary dance, a slow-motion sequence, or a couple of surreal lighting effects), but without any of the escapist decorative scenic details that might make such a traditional staging interesting.

I would count among these stagings David McVicar’s hideously dull Don Carlos and Darko Tresnjak’s lifeless Samson et Dalila (both at the Met). It’s a watered-down Wieland Wagner aesthetic – inoffensive yet bland.

Robert Carsen’s no-frills production of I Capuleti e i Montecchi for the Paris Opera is very much in this category—a production so tedious and confused it actively obstructed my enjoyment of the opera. Scene change after scene change revealed yet another empty, cavernous, dimly lit, abstractly conceived room (he might as well have staged it in a black box!): against this drab, half-arsed mise-en-scène, meager attempts at renaissance dress seemed rather contrived.

Carsen’s blocking consistently lacked theatrical precision (during the duel between Romeo and Tebaldo, the two combatants would frequently cross in front of each other, a move that, in real life, would dangerously expose one’s back to one’s opponent) and was frequently unoriginal (a slow-motion battle sequence, replete with dry ice, during the Act I finale felt like a cliché).

Quite honestly, my favorite moments of the evening were those where Carsen simply let his singers “park and bark.” At least then I could simply enjoy the exquisite performance of this undersung Bellini gem.