The Met’s Cinderella is a charming adaptation of Massenet’s opera. Frothy, fun, and enchanting, it is a magical holiday treat for the whole family to enjoy. 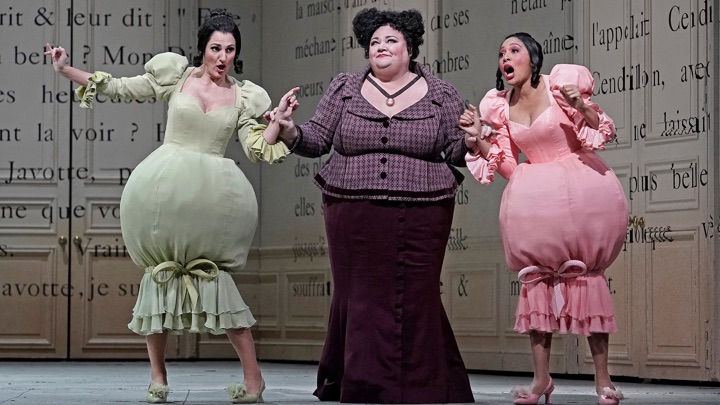 Like Chris Corwin before me, I was traumatized by the Met’s “holiday presentation” of Julie Taymor’s Magic Flute last year. And like Chris Corwin, I was hesitant about seeing a cut and translated Cendrillon this holiday season.

However, I need not have worried. The Met’s Cinderella is a charming adaptation of Massenet’s opera. Frothy, fun, and enchanting, it is a magical holiday treat for the whole family to enjoy.

Much of this has to do with Kelley Rourke’s translation. The Met’s adaptation of The Magic Flute was slapdash, dull, and distracting. Cinderella is a completely different beast.

Rourke strikes a satisfying balance between retaining the opera’s musical highlights and keeping the story moving. The biggest cuts come in the third and fourth acts: Cinderella’s vow to “die at the fairy’s oak,” the sensuous tryst between Cinderella and Prince Charming in the forest, and Pandolfe’s attempts to nurse and console his daughter after she is found half-drowned in a river.

Given the “family-friendly” adaptation’s intended audience, these are sensible cuts – either too dark or too sexy for a young audience. They also allow the opera to hew much closer to the Disney movie, a more familiar cultural reference for many children.

Still, Rourke’s adaptation keeps many of the opera’s most unique musical set pieces: Cinderella’s monologue in the first act remains, and, gratifyingly, so does much of the ballet music. And, at just 95 minutes, it is a full 20 minutes shorter than the (seemingly endless) Magic Flute.

Rourke wisely avoids overly literal translation. It is a translation more responsive to the rhythms and contours of Massenet’s score and the vibe of Laurent Pelly’s production than to Henri Caïn’s original libretto.

Rourke often does away with the rhyme scheme and even the meter of Caïn’s text in favor of a more flexible – often more colorful – English text.

For example, where Caïn writes a quatrain with an alternating rhyme scheme in strict meter towards the end of the first act:

The night may quickly pass, but while it lasts, I’ll enjoy it!
Once you knelt by the hearth in cinders, now you shall stand tall,
You’ll be the belle, the belle of the ball!
Tonight, I’ll sing and dance and smile with delight! Tonight!

In many ways, Rourke’s text here is more interesting than Caïn’s: “Once you knelt by the hearth in cinders” is more imagistic than Caïn’s “Me, who only knew contempt.” And the internal rhyme between “delight” and “tonight” in the last line has a decidedly Sondheim-ian feel.

This is a classy translation for a classy production. Pelly manages a Cinderella that is at once austere and over-the-top, abstract and unequivocal.

Pelly served as both director and costume designer on this production (as is his calling card). And it is certainly a production that derives much of its energy from its couture. The exaggerated seventeenth-century garb was not only the source of much of the production’s visual humor, it also determined the way that characters moved onstage: the extravagant hooped skirts, bustles, panniers, and crinolines worn by the women – deliberately designed to make walking awkward – gave each character an interesting and distinctive gait, adding greatly to the richness of the production.

I was initially concerned that Barbara de Limburg’s high-concept set – emblazoned as it is with the French text of Charles Perrault’s fairytale – would feel out of place in an English-language production. But Rourke’s translation retains enough French text to maintain cohesion between libretto and mise-en-scène.

Pelly’s production is remarkably tightly choreographed – especially for those more “comic” characters. There are moments where every step, shuffle, or gyration is carefully timed to Massenet’s score.

For the most part, this made for an engaging and vibrant spectacle, forming a gripping visual continuum with the ballet scenes (vividly choreographed by Laura Scozzi). However, the quieter, less busy scenes often felt curiously flat by contrast. Those scenes where there are just one or two characters alone on stage seemed empty or neglected – hardly the fault of the singers, but the unfortunate symptom of a production that emphasizes visual energy over dramatic intimacy (Pelly’s Manon, as I remember, had similar shortcomings). 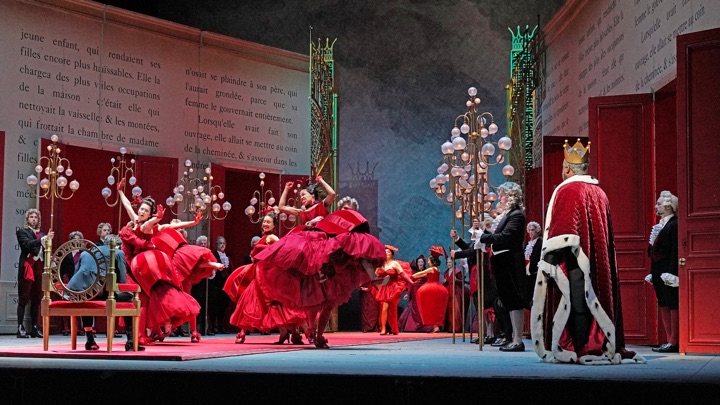 I attended Wednesday night’s performance, with the express intention of seeing the swing cast, who were scheduled to lead this performance (the main cast is headed by Isabel Leonard, Emily d’Angelo, and Jessica Pratt).

This performance comes at a time when covers, swings, and understudies have been brought front-and-center in the public consciousness. As the Omicron variant spikes across New York City, Broadway theaters have never been more reliant on their cover casts.

That same day, Broadway League president Charlotte St. Martin sparked widespread condemnation when she blamed “inexperienced” understudies for the spate of recent performances cancelled due to Covid-19. The very public outcry following this statement indicates that pandemic has given theater-goers a new appreciation for the invaluable (and often unseen) labor of these performers.

The cast who performed Cinderella on Wednesday night were outstanding.

Julie Boulianne’s Cinderella was exquisitely sung. Her performance felt effortless, earnest, and natural. Like most Massenet divas, Cinderella requires both razor-sharp coloratura and perfectly controlled lyricism; however, Cinderella is unique among Massenet prime donne in consistently requiring this in the upper register of the mezzo-soprano voice.

Boulianne proved particularly adept at navigating these difficult corners of the role, her upper register bright and resonant, her lower register smooth and supple.

I particularly enjoyed her performance of Cinderella’s Act I monologue. In this adaptation of Massenet’s opera, it is the first major piece of lyrical singing in the opera. Boulianne kept it light, gently massaging the phraseological nuances of Massenet’s lyrical writing while never sacrificing the flow or the energy of the vocal line.

I would have liked a little more contrast in her Act III monologue, which was sung a little too carefully for my taste. Here, Cinderella must act as storyteller, recounting the events of the ball while also processing her own conflicting thoughts and emotions. Boulianne brought a sweetness and a delicateness to this moment, but at the expense of dramatic variety.

Samantha Hankey’s Prince Charming was the perfect complement to Boulianne’s Cinderella. A darker, silkier voice, Hankey offered a performance that was grounded yet luxuriant, cozy yet impassioned.

Her Prince Charming possessed a quiet, sensitive masculinity and a rare warmth that offset some of the major pitfalls of the character. In the wrong hands, Massenet’s prince can seem mopey, spoilt, and pushy; Hankey avoided this by exposing Prince Charming’s vulnerability, emphasizing his idealism and his innocence – an altogether endearing portrayal.

The love duets between Hankey and Boulianne were, indisputably, the musical highlights of this performance: perfectly balanced, delicately blended, and brimming with tenderness. It makes me wish that the forest scene was not cut from this production: these love duets were buzzing with expectant energy and it was a shame that this palpable chemistry was not able to progress and evolve over a longer operatic durée.

I greatly enjoyed Brandie Sutton’s Fairy Godmother. While her voice is perhaps a little small for the house (especially for an English-language production, where the audibility of the text is so crucial), her coloratura was utterly electric – spry, radiant, and unfailingly precise.

Stephanie Blythe and Laurent Naouri delivered sublime comic turns as Madame de la Haltière and Pandolfe respectively. Both seemed to recognize the importance of “playing up” these characters for a young audience, delivering delightfully over-the-top performances that never failed to light up the stage.

Being from the Commonwealth, my first experience of the Cinderella fairytale was not on the stage or on the silver screen, but in Christmas pantomime. Blythe’s Madame de la Haltière had distinct “pantomime dame” vibes – and not only because of her decidedly baritonal chest voice and mesmerizing stage presence. Blythe captured all the comic “beats” in Massenet’s score, filling it with character and charisma.

Naouri’s Pandolfe was marked by crystal clear diction, a broad, robust sound, and seemingly boundless energy. But his best singing, by far, came when comforting Cinderella in the third act, where he revealed a soft, surprisingly buoyant upper register.

I particularly enjoyed the drive and precision with which Villaume approached those quieter moments in the opera: Villaume avoided wallowing in the romanticism of Massenet’s writing, maintaining a clarity and a sprightliness throughout.

With the pit raised (presumably to provide first-time operagoers a better view of the orchestra), Villaume was more visible than usual, offering a rare insight into the interaction between conductor, orchestra, and singers. Villaume proved responsive to the needs of this cast – always “in step” with their interpretations while never sacrificing the tone and vitality of the orchestral sound.

While Isabel Leonard and Jessica Pratt return as Cinderella and the Fairy Godmother for the remainder of the run, it seems that Hankey is now replacing Emily d’Angelo as Prince Charming in the performances on the 28th and the 30th (and, of course, Naouri, Blythe, and Villaume are slated for the entire run). But, as Omicron continues to shuffle cast lists in theaters across the city, it is becoming less and less certain that the advertised cast will be the one which performs.

Fortunately, whatever happens, the Met is blessed with excellent covers.