Ms. Damrau unleashed a Blitzkrieg of charm upon her audience. 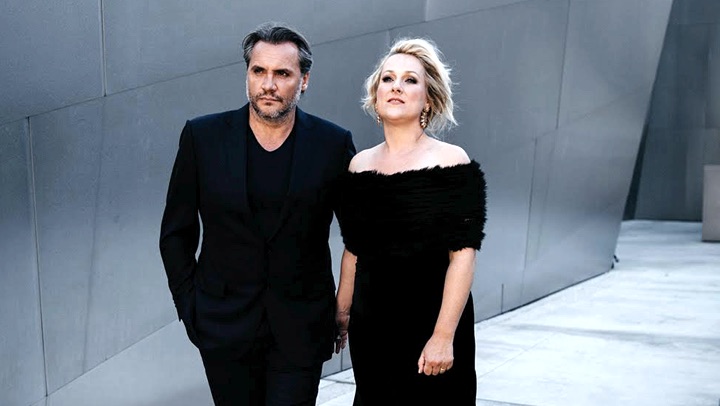 Sunday night here in Santa Monica the Broad Stage continued their “Celebrity Opera Recitals” series with a joint appearance by husband and wife duo soprano Diana Damrau and bass Nicolas Testé. The Broad is surely one of the best venues for music here in Los Angeles with a superior acoustic, spacious and comfortable seats, easily navigable aisles, and capacity just shy of 540 audience members.

Although they’ve certainly sung together before I wondered in advance what might be on the program since I don’t believe Mr. Testé strays too far into baritone territory and there aren’t that many showpieces for soprano and bass. I was having trouble picturing either of them as father/daughter Boccenegras or worse the Macbeths (!)  A program was announced that was a canny combination of Liederabend and opera arias with the second half mostly dedicated to popular selections from operetta and Broadway.

La Damrau took the stage at the opening in a lovely black silk gown decorated with an enormous flaming orange orchid on the skirt with gold threading and a black shawl that stopped just short of the stage floor (She should give master classes on how to handle a shawl onstage and I’m not kidding). Her blonde hair was casually arranged and she spoke to the audience on the vagaries of travel from disparate climates with school age children and how she and her husband were now both suffering with sinusitis.

She said they were both on antibiotics and  begged our forgiveness if there happened to be a little more throat-clearing than usual.  She then informed us that she was striking Richard Strauss” “Cäcilie” from the first half of the program which seemed wise.  Its substitution would be the same composers “Wiegenlied” which she informed us was actually  much longer (so we shouldn’t be disappointed).

Charm offensive complete they then presented three of Henri Duparc’s melodies with Ms. Damrau taking “L’invitation au voyage” and “Chanson triste” and Mr. Testé  offering “La vie antérieure” between  the two.  Mr. Testé, being French ,had the slight advantage here but I could have listened to  them sing Duparc all night. The attention to the sensuousness of the text and phrasing from them both was bewitching.

Mr. Testé then gave us the Claudius” Act III aria from Thomas” Hamlet  “Je t’implore, ô mon frère” which fell on fresh ears to say the least. His bass is bright and easy at the top but like so many bass arias this one ends in the basement and I’m afraid he hit a little gravel. No doubt due to his aforementioned infirmity, although I heard one wag say later that a little sinusitis must favor the French vocal placement. 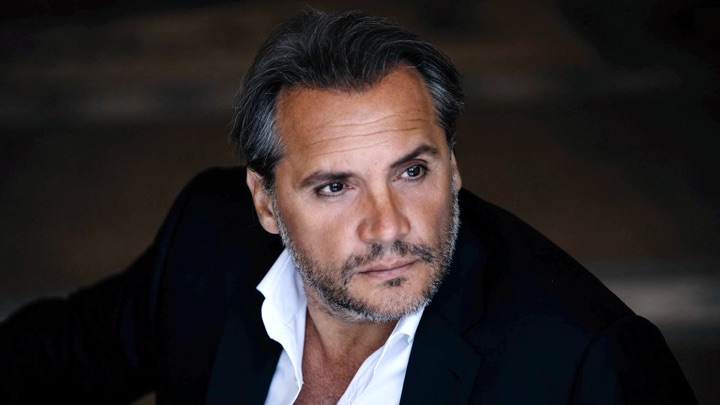 The third star of the evening, accompanist Maciej Pikulski, then took the stage to offer the divertissement of Chopin’s “Minute Waltz” in a performance so dizzyingly swift and articulate I actually heard grumblings about its inappropriateness at intermission. “Minute” I was later informed refers not to speed but to size. Still it was fun to listen to.

Ms. Damrau returned for the two Strauss and she was lovely and conversational in a mostly sunny “Einerlei” and then poised and delicate in the “Wiegenlied.” The other word I could use would be “cautious.”

Mr. Testé once again mined the archives of L’Opera and offered up Soliman’s Act IV “Sous les pieds d’une femme” from Gounod’s La Reine de Saba. He made short work of its demands of legato phrasing decorated with tiny graces and interspersed with more dramatic outbursts. Still the low-landing at the finale was occluded and he had our sympathies.

Donizett’s Anna Bolena was next on the bill and I’m just about rubbing my hands together in glee over finally getting to hear La Damrau live in Bel Canto territory. She sang the cavatina of “Al dolce guidami’, shorn of its opening recitative (which does go on…so I forgive) and, with a control of breath and omission of tone that was equal parts bewitching and astonishing. Trills were clean and she ornamented with imagination and gusto at the finale.

To close out the first half she and Mr. Testé performed the entirety of Act One Scene II of Bellini’s I Puritani which I think is my favorite part of that score that doesn’t involve temporary insanity. She was a fiery Elvira, coltishly gamboling through her coloratura defiance to her arranged marriage and then blending their voices beautifully when she discovers that she’s been betrothed to her true love.

Mr. Pikulsiki’s accompaniment through the two bel canto pieces showed what a dexterous and able partner he was since there’s so little for him to play. Especially when compared to the other composers on the program. 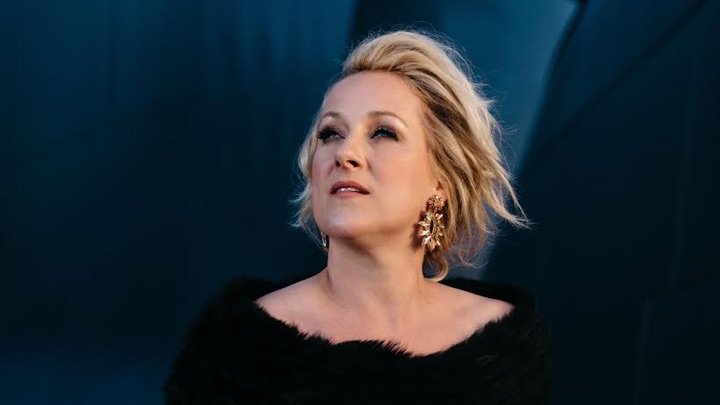 Mr. Testé opened the second half with the substitution of Gremin’s last act aria from Eugene Onegin over the scheduled aira of Alvise from La GIoconda.  This was a beautifully intimate performance that brought forward all of the autumnal joy inherent in that piece. He also landed that tricky finale with no trouble.

Ms. Damrau answered back with Rachmaninoff’s “Frühlingsfluten” which I don’t think I had ever heard before and then Mr. Pikulski got his hand in the game by playing the same composer’s “Prelude Opus 23. No. 5.  His playing all evening was exemplary with attention to not only dynamics and tempo but the level of bravura displayed here was pretty breathtaking and he was justly rewarded by the audience. Meanwhile the man hasn’t broken a sweat all evening.

We then waded into the land of Franz Lehar. Ms. Damrau, who had displayed a fetchingly modest and comic appeal on the concert platform up until this point, unleashed a Blitzkrieg of charm upon her audience so potent I don’t think many of us will recover for days, if not weeks, to come.

Not that she wasn’t having a good time up until now but In Lehar’s “Hör ich Zymbalklänge” from his Zigeunerliebe (the other Czardas) she cavorted and flirted, she danced, and literally spun on the stage like a dervish. She capped the whole thing off with the flaming high C we’d all been waiting for. Apparently so had she because she seemed very happy with herself from that point on.

She then gave us a touching “War es auch nichts als ein Traum” from Eva including sprechstimme introduction and then brought the house down with “Liebe du Himmel auf Erden” from Paganini. My guest for the evening turned to me during the applause and said, “I want to be her friend” and I’m certain she was not alone.  Ms. Damrau took every opportunity through the end of the evening to dance or waltz or move her body to the music and it was literally a joy to watch because she took so much pleasure in it and moved so beautifully.

The comedy quotient went up several notches for what became the running gag for the rest of the evening entitled “Who’s got the sheet music?”.  Mr. Testé strolled on, somewhat sheepishly, I’m sure hoping that after what had just transpired the audience would actually remember who he was. The program announced “Oh What a Beautiful Mornin” from R&H’s Oklahoma!  and Mr. Testé apologized for his French accent at which point Mr. Pikulski abruptly took his leave from the Steinway and marched offstage.

A few moments later Ms. Damrau poked her head out of the artist’s entrance and said the music was downstairs and was being retrieved. Mr. Pikulski returned shortly but empty-handed at which point Mr. Testé lent him his copy from the music stand that had been using very discreetly.  Ms. Damrau, who’d been helping him kill time to the audience’s general mirth, was standing at his side and they remained together for the rest of the evening. I want all my Curlys to sing with a French accent now.

Ms. Damrau then favored us with a beautiful song by Brad Ross called, “How Sad No One Waltzes Anymore” which was completely appropriate since she waltzed her way through half of it. It’s a lovely piece that wants a legitimate voice and deserved its place on the program. She also sang it in near flawless American English (hard “r’s and all) which was particularly surprising. I’m sure at this point half the audience was ready to offer her honorary American citizenship.

And the waltzing continued with Lerner & Loewe’s party piece “I Could Have Danced All Night” and she meant it with a vengeance.

Tumultuous applause followed on by floral tributes for all concerned and never-ending bows.  We then had another round of “Who’s got the sheet music for the encores?” They were located and Mr. Testé favored us with a lovely “It Might as Well Be Spring” from R&H’s State Fair and Ms. Damrau countered with Hugo Wolf’s “Auch kleine Dinge” which brought the evening to a delightfully bittersweet moment as she caressed the roses on the piano as she sang of their beauty immortalized.

Then to everyone’s surprise, except perhaps her own, La Damrau, now well warmed up and with endorphins surging through her system, changed her mind once again and launched into the previously canceled “Cäcilie” and all was right again with the world.