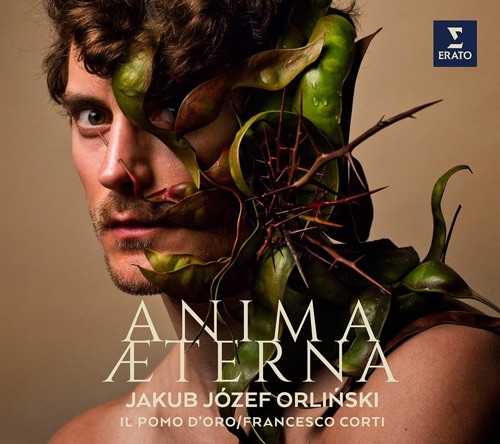 The stack from the past year-and-a-half looms high, but I’ll concentrate on just four released in the past few weeks by Jakub Józef Orlinski, Lea Desandre, Jeanine De Bique and Sabine Devieilhe, plus a quick snapshot of four older CDs by baroque newcomers.

Those who attended Met performances or the HD transmission of Matthew Aucoin’s Eurydice likely wondered why all the fuss about Orlinski, the “breakdancing countertenor.” Unfortunately, Aucoin’s writing lay too low for the Polish performer and he was frequently drowned out by both Joshua Hopkins’s stentorian baritone (whom he doubled) and the composer’s rich orchestration. Even his usual personal charisma was muted by Mary Zimmerman’s oblique direction.

This time he returns to Zelenka in addition to works by Fux, de Almeida, Nucci and Manna. Sparing no expense, Erato invited soprano Fatma Said and a small choir to join Orlinski in a generous program which runs over 80 minutes.

The handsome singer again goes shirtless in the photos accompanying the new CD, but this time we only see his bare shoulders! His countertenor-hunk status now secure, Orlinski can beguile us once more with his warmly soulful singing which is most affecting in the adagio numbers rather than the allegro bops, where as in the opening aria of Zelenka’s “Barbara, dira, effera,” his coloratura is accomplished but not dazzling.

Anima Sacra may remain most memorable for reintroducing us to composer Nicola Fago; one of the new CD’s highpoints is “Laudate pueri,” a joyous motet with chorus by the equally obscure Gennaro Manna. Orlinski fans should turn to other recorded works by Zelenka, the inventive Bohemian composer, after reveling in the singer’s delicious duetting with Said in “Laetatus sum.”

Those unfamiliar with Orlinski’s art might first sample pious oratorio excerpts by Fux and the fascinating Portuguese composer de Almeida; his rapt, prayerful performances of this pair should be the perfect Advent escapes.

Orlinski was scheduled to perform with Desandre and Les Arts Florissants in a pasticcio that was to travel to Lincoln Center in summer 2020. A stripped-down version instead briefly toured earlier this year and one delightful hip-HIP duet by Irving Berlin (!) surfaced on YouTube.

Why surprising? Who knew there were so many long forgotten baroque works about the mythic tribe of female warriors? Who has heard of—much less heard bits of—Viviani’s Mitilene, regina delle amazzoni or Destouches’s Marthésie, première reine des amazones? Rather than feeling gimmicky, Desandre’s Amazone proves a delicious introduction to some delightful “new” music while providing further exposure to one of the past decade’s most promising French singers.

There’s a bit of a stylistic jolt when we get to some red-blooded Vivaldi toward the end of the disk but arias from Ercole sul Termodonte are performed with the same suave panache found on Desandre’s earlier CD dedicated solely to works by the Red Priest.

Desandre will be performing some of those Vivaldi works again with Jupiter conducted by lutenist Thomas Dunford (her frequent collaborator/partner/husband?) at Weill Recital Hall in March.

By accident I discovered that all three of Orlinski’s Erato recitals as well as Amazone had been curated by the young Guadaloupe-born bass-baritone Yannis François. Based on these four disks, it’s clear that this promising singer also has an astonishing musicological gift for unearthing uncut gems.

It was then no surprise that François had also put together the intriguing program for De Bique’s delectable Mirrors from Berlin Classics on which the Trinidadian soprano is accompanied by the great Concerto Köln led by Luca Quintavalle. François’s valuable concept this time was to pair arias for Handel heroines with those written by other composers. We then have, for example, Graun’s Cleopatra and Rodelinda, Telemann’s Agrippina and Broschi’s Alcina.

De Bique’s joyful approach enlivens even the most familiar Handel arias as New Yorkers heard at her appearance at the 2019 Mostly Mozart Festival.

It’s too bad that the soprano doesn’t plan to include any 18th century music on her NYC return concert in April.

Inevitably François had no hand in Devieilhe’s latest, a somewhat predictable survey of Bach and Handel pieces.

The French soprano’s divine Rameau CD from a few years ago remains a favorite, so my expectations were high for her return to the baroque. However, it’s a bit of a mixed bag.

Accompanied by her partner/husband (?) Raphaël Pichon and his ensemble Pygmalion, Devieilhe includes two very familiar Bach cantatas #51 and 199, Jauchzet Gott in allen Landen and Mein Herze schwimmt im Blut. The former, a florid showpiece, struck me as bland and lacking in energy despite her coolly fluent coloratura, but the latter elicits a more deeply felt response, her limpid voice at one with Bach’s wrenching setting.

As Devieilhe prepares to take on Cleopatra in Giulio Cesare in Paris this spring, the inclusion of two of the Egyptian queen’s beseeching arias is scarcely surprising, yet they feel out of place in a program of sacred music.

I’d also like to turn quickly to a worthy quartet of solo debut CDs from last year. While Orlinski may be grabbing many of the countertenor headlines, yet another Metropolitan Opera National Council Auditions finalist has been stealthily doing impressive work. Aryeh Nussbaum Cohen recently sang his first Giulio Cesare in Moscow.

His very attractive disk of well-known arias by Handel, Vivaldi and Gluck shows the young American in fine voice radiating both an inviting warmth and a stylish command.

This spring, he makes his Met debut in Brett Dean’s Hamlet paired with Christopher Lowrey, another fine American countertenor, as Rosencrantz and Guildenstern.

Especially in arias from Berenice and Atalanta, Mariño pops out brightly pinging high notes unlike any I’ve heard before from a man!

American contralto Avery Amereau joins the Philharmonia Baroque and Nicholas McGegan for a satisfying mélange of Handel arias ranging from familiar ones from Giulio Cesare, Rinaldo and Alcina to less often heard excerpts from Amadigi and Silla.

The producers were unwise to begin the disk with a florid piece from Aci Galatea e Polifemo in which Amereau struggles, but she quickly settles into lushly earnest renditions that promise much in a world desperately lacking accomplished contraltos.

In a sumptuous mix of opera and oratorio arias in collaboration with Le Concert de l’Hostel Dieu conducted by Franck-Emmanuel Comte, Junker’s radiant soprano gleams with special splendor in rarely performed arias from Joseph and his Brethren and Deidamia. I have often programmed this disk on repeat as it cheered me greatly during the pandemic’s bleakest moments.

And the baroque flood continues into 2022: for example, look out for more swell Erato releases including the first solo CD from Bruno de Sá, another spectacular South American sopranist, and an all-Handel collaboration between Hungarian soprano Emöke Baráth and conductor (!) Philippe Jaroussky.