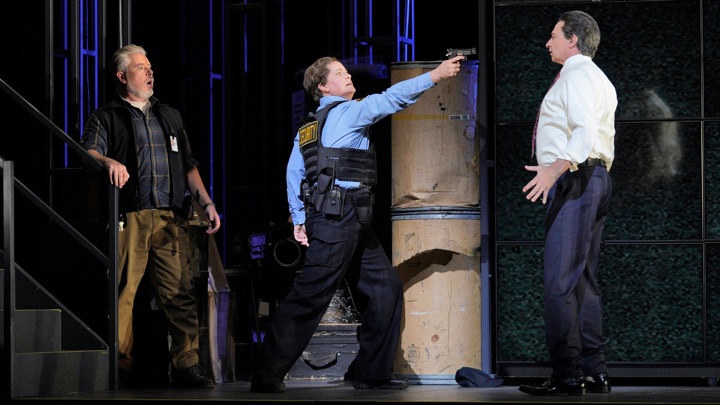 It seems that the opera world has lately been under enormous amount of pressure, not only from the ongoing consequences of a global pandemic, but also from the ever-changing times and, most importantly, the sensitivities of the audience. Opera companies all over the world have been trying to find various ways to address the issues, and specifically on the latter, they usually resolve to present a reinterpretation of some sort of the opera in question.

Ludwig van Beethoven’s “rescue opera” Fidelio was presented by San Francisco Opera as their first new production of the season last Thursday in such reinterpreted fashion. Sixteen years since the last mounting, this was originally planned for 2020/21 Season as part of the global celebrations of the 250th anniversary of Beethoven’s birthday, which unfortunately had to be canceled when the COVID-19 struck. The performance on Thursday also marked another First for San Francisco Opera, as it was live-streamed for the first time in the company’s history.

The reinterpretation was the intended selling point for this show, as SF Opera proudly declared in its website and advertisements that “Disguised as a guard, one woman infiltrates a nightmarish detention center to unravel the mystery of her activist-husband’s disappearance. Enter into a modern-day reflection of incarceration with director Matthew Ozawa’s brand-new production of Beethoven’s only opera”. Those two sentences perfectly captured Ozawa’s vision for the staging, and in the video below, he detailed why the project was such a personal one for him, being a fourth-generation Japanese-American whose father was born in WWII internment camp.

Furthermore, in the illuminating Director’s Note Ozawa spelled out his motivation behind this reinterpretation.

We were cognizant that the opera’s original setting of the late 18th century was close to the time period in which it was written and premiered. It would have felt very contemporary and relevant to those that saw it. Therefore, we set our production in a recent past or near future detention facility, somewhere in the world. This setting allows us to investigate contemporary structures that remove those that are deemed an “other” and a threat and to give voice to those who have been powerless to speak. In doing so, not only do we aim to honor the rich history and spirit of the work but also recognize the countless people who have overcome oppression, fought for liberty, and have been agents of change.

While I appreciated, even applauded, Ozawa’s lofty ambition for this project—a timely and much-needed reflection on the world we live on—unfortunately the presentation on stage last Thursday proved to be a much challenging affair, where the whole was less than the sum of its parts.

Alexander V. Nichols’ set—a towering two-story steel cube on a revolving turntable—truly captured audience’s attention from the moment it was introduced to the audience when the curtain was lifted. The constantly rotating cube featured holding cells, interrogation rooms, offices and storage spaces, even it represented the hidden chamber as well. At first glance, it bore some resemblance to the set of the controversial Calixto Bieito mounting for Bayerische Staatsoper in 2010, revived in early 2019. Nevertheless, the 20-ton cube alone was a sight to behold and it provided an efficient space management for the nonstop actions on stage, even if at times it creaked a little in the process (I was sitting 11 rows from the stage).

As visible from the trailer above, the cube was filled with San Francisco Chorus and supernumeraries, mostly divided into two camps, namely “The Detainee” and “The Security” and Jessica Jahn’s costumes left no doubt about how to differentiate among the members of each camp; “The Detainee” (mostly SF Chorus members) were dressed mostly in bright yellow prison suits with the word “DETAINEE” emblazoned on their backs, while “The Security” all wore navy blue bulletproof vests and matching caps, with tiny “SECURITY” written on those vests. Coupled with the presence of kids and families on stage, it was easy to guess where the inspiration came from; all you need to do is to compare the video below with the trailer above.

Therein lay the issue, or to be exactly precise, my biggest problem with the dramaturgy with this production. The whole Fidelio-Florestan-Pizarro was still presented as motivated by political rivalry just like the original intent, and as a result, it created a dichotomy in this production that severely undermined the last half of the second act and the finale.

It was truly hard to imagine that the migrant detainees—themselves having much bigger problem of their own survivals—would even care and cheer for a politician’s wife’s valiant efforts to save her husband from the secret chamber that happened to be in the same detainment center! It didn’t help that the arrival of the President’s minister and Florestan’s fellow politician friend Don Fernando—the somewhat deus ex machina of the opera—was portrayed merely as a photo-op of said minister with the detainees, rendering the whole scene empty and the final chorus completely hollow!

The more I pondered the production, unfortunately the more idiosyncrasies I found as well. Take the haunting “Prisoners’ Chorus” for example. While I originally thought it would be a perfect vehicle to demonstrate the plight of the migrant detainees, when it arrived it was shone with JAX Messenger and Justin A. Partier’s bright lights and, coupled with Jahn’s decidedly bright color palettes for The Detainees, on stage they looked like as if they were going to have picnic on the beach! 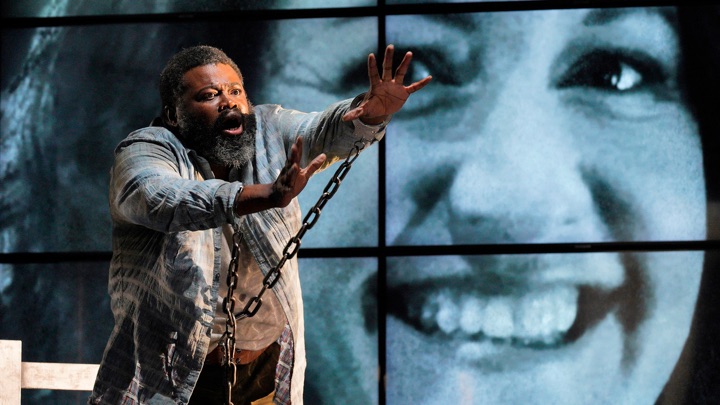 Similarly, Act 2 opened not with Florestan’s in complete darkness (after all, the orchestration and his first few words were reflecting on that situation), but apparently, he was held in a kind of torture chamber with bright glaring videos surrounding him playing nonstop, as seen in the picture above! Thankfully the super distracting videos were muted into grey screens before he started singing; nevertheless, the whole scene was rendered much less chilling for me, and in a way, I felt it actually hindered the audience’s sympathy for him.

The constant spinning of the cube, too, provided more challenges, as more often than not it started to move before a singer completed their aria, ensuing that singer to be out of focus by the end, or worse, they had to run along to make sure they stayed visible!

It was very unfortunate that the realization of Ozawa’s vision ended up being so messy, if not rather gimmicky, on stage. Russell Thomas, who played Florestan here, in an interview revealed his own vision that I felt it could even more be pressing to reflect our times, and which I hope that a brave US opera company would take on it soon.

He said “I had actually shopped an updated version of this around to a few opera companies. And they didn’t want to touch it because I wanted it to be all Black men in prison. I wanted the chorus to be all Black men so they could see that the reality of what’s happening in America’s prisons on stage.”

Luckily, Thursday night’s show was on much better ground musically; chief of all was the presence of Elza van den Heever as the titular role, which I found to be particularly revelatory. My colleague Christopher Corwin sang praises for her role debut in 2016 Caramoor Festival, and I gladly echoed those sentiments five years later. Her dark soprano sounded sufficiently masculine and muscular at the beginning of the opera and the Canon Quartet, and she let it rip during the treacherous “Abscheulicher!” and particularly the subsequent “Komm, Hoffnung” that was greatly applauded by the appreciative audience!

She seemed really happy with her performance and she looked extremely touched when the audience showered her with the loudest cheers!

Van den Heever was paired very well with bass James Creswell in a scene-stealing role as the good-hearted warden Rocco. With full sonorous voice—imbued with fatherly touch to both Marzelline and Fidelio—his Rocco wasn’t just a meek character; his was fully fleshed out as a man torn between the need to please his boss in order to keep his job and his own conscience of the happenings surrounding him.

As the villainous Don Pizarro, veteran bass-baritone Greer Grimsley started rather tentatively, and his “Ha, welch ein Augenblick” lost quite a bit of its sinister tone, being swallowed by the orchestra. However, he quickly found his footing and especially in Act 2, he delivered a chilling portrayal of evil incarnate, so much so that he got booed during the final bows. On a lighter note, I just couldn’t shake the feeling that Grimsley’s Pizarro—who kept being called “The Governor” throughout the opera—had his costumes and makeup done to resemble a certain controversial governor, brown wig and alll!

When the cast was first announced, I was most interested in hearing Thomas as Florestan, based on his acclaimed track records as Pollione in Norma and the title role of Roberto Devereux. Unfortunately, this performance found him rather underwhelming, as he was drowned by the orchestra during his aria, and even by van den Heever during their duet.

The voice still retained its tonal beauty, but I missed the power that made his bel canto works so alluring. My companion for the night even thought he was the weakest link in the cast! While I wouldn’t go that far, I truly hope this was simply an off night and he would regain his power in subsequent performances.

As mentioned above, I absolutely abhorred the characterization of Don Fernando in this production, so Soloman Howard’s portrayal left little impression on me; it was very unfortunate, especially following his star-making Angelotti in the season-opener Tosca. (He was scheduled to sing the Commendatore in next summer’s Don Giovanni.) Four San Francisco Adler Fellows completed the cast—Anne Marie MacIntosh (Marzelline), Christopher Oglesby (Jaquino), Zhengyi Bai (First Prisoner) and Stefan Egerstrom (Second Prisoner)—and they all handsomely performed their roles with a lot of vigor and excitement. 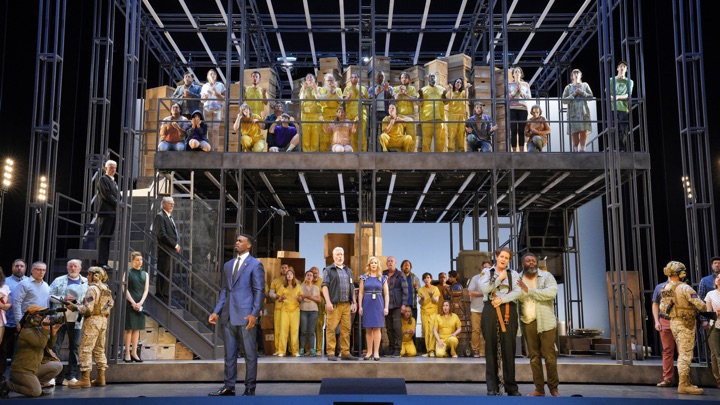 San Francisco Opera Caroline H. Hume Music Director Eun Sun Kim, conducting the score for the first time, led the orchestra in a rather puzzling performance. After a messy Overture, she kept alternating between readings that was light and Mozartian for Marzelline/Jaquino duet and the Canon Quartet, and heavy Romantic on the other side (the Finale in particular). It was almost as if the presence of the steel cube before her hardened her view, which was usually much more nuanced and fuller of colors. While there were many moments of absolute beauty from the Orchestra, their presences were sandwiched between ponderous phrases that threatened to drown the singers.

San Francisco Opera Chorus, on the other hand, behaved like little angels that night, as if the plight of migrant detainees truly shook their cores in both the Prisoners’ Chorus and exuberant Final Chorus. Chorus Director Ian Robertson, who will retire this year after 35 seasons, looked extremely pleased with them and it warmed my heart that the audience cheered for him loudly.

All in all, it was a thought-provoking night at the opera coupled with fine singing. Let’s hope that we won’t have to wait another 16 years for the next production of Fidelio, as this story of personal sacrifice, heroism, and eventual triumph is very much relevant to the times we live in!