Once more with feeling 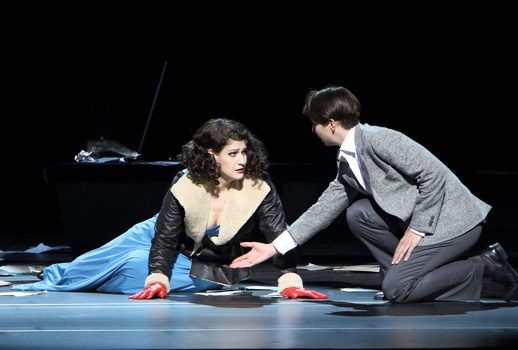 We humans tend to dislike uncertainty, therefore there is something comforting going to opera revivals; you know exactly what you are going to get.

In the era of internet and social media, all you need to do is just a quick Google search, and voila, everything you need to know is right in front of your eyes; from past cast lists, reviews, photos, video clips, background stories, and sometimes you can even watch the whole show online. It’s much easier to make up your minds about the production beforehand!

With that in mind, I attended three beautiful revivals during my opera trips two weeks ago. The first one was the last performance of Richard Strauss’ Arabella at Bayerische Staatsoper, on 1/25. This production, directed by Andreas Dresen, was premiered in 2015 conducted by Philippe Jordan, and it had been revived twice prior to this, all conducted by the current conductor, Constantin Trinks.

Dresen seemed to build the show around Anja Harteros, who performed the title role in all four occurrences. At every opportunity, the spotlight kept falling on her, as if it was a constant reminder who the star was.

The striking but super static set, with its emphasis on stairs mostly on the background, turned this more into human tableau, where the drama was reserved to the interaction of the singers. (Interestingly, the stairs span impressively during the orchestral interlude between Act 2 and 3, but stayed static throughout each act).

And Harteros herself rightfully claimed the right to be the star. Her Arabella was sophisticated and graceful, more mature than she should be, perhaps. Her voice soared without strain, and she moved with ease, definitely very comfortable with the role.

In my opinion (although the applause didn’t seem to agree with me), Harteros met her match in Michael Volle’s Mandryka, who did sing the role in a revival previously. I personally do love his voice, but it was his characterization of Mandryka that was even more appealing.

There was a high level of confidence in his reading, a mix of ease and brute at the same, and his Mandryka was completely unfazed by people around him. Volle even found humor in him, making it less than the desperate country bumpkin that Mandryka was usually portrayed as.

Arabella, apart from the title role, was quite an ensemble piece, and here the supporting roles were uniformly excellent, making the night such a joy to listen to. Kurt Rydl and Doris Soffel, who have been with the production since the premiere (together with Hanna-Elisabeth Müller’s Zdenka), were perfectly cast as the overbearing yet loving parents, slightly caricatured.

Müller’s Zdenka looked sufficiently boyish, and her lyrical bright soprano sounded clear and bell-like. She and Harteros’s voice blended very nicely together, and had great chemistry as sisters.

Daniel Behle, pretty much the only newcomer to this revival, made an elegant Matteo, his bright voice complemented his confident acting (no awkward Matteo here!), although there were times I wished he could be a bit more expressive, particularly during the puzzlement over the whole Zdenka affair.

Constantin Trinks led the Bayerisches Staatsorchester in a direct manner and with vigor, if not very Viennese sounding. He was however careful not to drown the singers, and the evening moved smoothly under his commands. All in all, this was a wunderbar moment of German opera at this venerated opera house, and it was definitely a highlight!

The second revival I attended during my trip was Monteverdi’s Il Ritorno d’Ulisse in Patria at Staatsoper Hamburg on 1/29. This Willy Decker’s production, first seen on the stage less than two years ago, retained pretty much all the principals from the premiere, and once again it was conducted by Vaclav Luks with his period instrument orchestra, Collegium 1704.

Decker staged the opera in a very minimalistic way. The set, by Wolfgang Gussmann, consisted of tilted large white disk, sometimes static, sometimes rotating. The singers were all dressed in black and white office uniforms, and they were almost always on stage, acting as Greek chorus surrounding the disk when they were not in characters.

The gods and goddesses were placed on a long table behind the disk, commenting on the actions of the humans in front of them.

This was a very physical staging, as the singers were constantly moving; they sang, danced, walked, placed props, removed props, etc etc, and it made the show feel like in constant motion (maybe the disk representing the wheel of life?).

I found that Decker’s vision was very intriguing and he executed it well. Decker also balanced the performance with silly whimsical moments, such as the three suitors wearing various “I heart Penelope” shirts, which in turn helped to keep the whole proceeding engaging.

In addition, there was a lot of nudity in this. As L’umana fragilità in the Prologue, for example, countertenor Christophe Dumaux was stripped to his underwear and tortured by his fellow singers. Ulisse spent almost the whole night shirtless as well.

The “humans” (as represented by the singers) were sexually charged as well, particularly Melanto and Eurimaco, who could never get enough of each other.

The two central characters were truly amazing. Sara Mingardo’s Penelope was the personification of virtue, as she was steadfastly devoted to Ulisse. Her beautiful dark contralto voice was definitely an asset, and she used her instrument smartly to convey a wide range of emotions, from the heartbreaking lament early on, till the heartwarming reconciliation duet with Ulisse at the end.

In the title role, Kurt Streit was stoic and heroic, with some weariness in his voice, making him an ideal Ulisse. He was captivating to watch on stage as well. The bare stage afforded him a lot of opportunities being in spotlight alone and each time he further defined his role with his actions, sometimes even before he started singing.

Il ritorno is written for a large cast – almost thirty roles plus choruses – and most production, this included, reduced them into about half by doubling the roles.

The singers here also doubled as the chorus, making it truly an ensemble piece. They did, however, mostly manage to find individualities in each of their performance, not always easy in such crowded space. It was such a pleasure to be in the company of such high-level standards.

Some noteworthy mentions included Fabio Trümpy, whose bright voice made Telemeco particularly haunting, and aforementioned Dumaux. Dumaux explored a wide range of emotions in his dual-role, from the tortured existence in “Mortal cosa son io” to the silly antics as part of the three suitors.

If I might nitpick, the upstage placement of the gods unfortunately made it hard to hear the singers.

The large period orchestra Collegium 1704, led by conductor Václav Luks, played the score with transparency and beauty, every melody was shaped lovingly, sometimes it could feel almost like too pretty.

I would like to hear a bit more aggressiveness and grit, for example when Ulisse kills the three suitors, or even in the Prologue. But there was no denying the high level of playing by the orchestra.

It was definitely a great night at the Opera. But at that bare stage, when both Penelope and Ulisse crouched over and she recognized him, my tears started to fall uncontrollably, and this wasn’t just great, this was out of this world! I couldn’t help thinking “it’s the simplicity that speaks volumes.” May more opera directors abide by that rule in the future!

The last revival that I saw was quite possibly the most anticipated show in Munich, the revival of Calixto Bieito’s production of Beethoven’s Fidelio with an all-star cast (including Jonas Kaufmann, Anja Kampe, Günther Groissböck and Wolfgang Koch), conducted by Kirill Petrenko.

This show had been sold out for months in advance, so when I saw some tickets available for the final performance (2/2), I couldn’t pass the opportunity, even if Bieito’s nine year old staging hadn’t been receiving good reviews.

Right from the start, I would like to say that I loved the production! Yes, it had quirky moments – among others including the use of Leonore Overture No. 3 as the overture, the inclusion of “Molto adagio” from Beethoven’s String Quartet in A minor, Op.132 in the jail scene (with the quartet suspended in cages from the ceiling), Don Fernando dressed as Heath Ledger’s Joker, etc.

The claustrophobic feeling of being in a labyrinth really captured the tone of the opera and the anxiety felt by the characters. I wasn’t too bothered with the elimination of the dialogues, although I did feel the insertion of texts by Jorge Luis Borges and Cormac McCarthy slowed down the action a little bit, particularly the one preceeding Don Pizarro’s entrance.

Rebecca Ringst’s set was truly a sight to behold. While I thought the pictures looked nice beforehand, nothing prepared me to be amazed by the majestic sight of that labyrinth, especially as lighted with Reinhard Traub’s brilliant colors.

From there, the action was nonstop, as singers and dancers all kept running, climbing, jumping up and down the structure. The labyrinth was impressively lowered down after intermission, where the dancers started crawling above it. From my balcony seat, the whole process was really fascinating.

Musically, the night was absolutely satisfying. While on paper the cast might look like they were ready for Parsifal or Tristan, Kampe, Kaufmann and Koch were actually the original 2010 cast (directed by Daniele Gatti at that time). The rest of the cast had been singing the roles in one of the previous revivals, only Groissböck was the newcomer to this.

Kampe had been the anchor for this production since its arrival, so there was no doubt that she was super comfortable with the role. (She only missed one performance in nine years!) Her Leonore/Fidelio was proud and defiant, from the moment she bounded her breasts at the beginning.

I detected a little strain at the top, but otherwise her singing and acting were excellent and intense. For her, and pretty much everybody on stage, it might be such a workout to run around and climbing up and down, while singing the score.

Kaufmann sounded fresh that night; he floated a spectacular pianissimo at his entrance, and it was breathtaking! The rest of performance he maintained singing at such a high level. Groissböck’s Rocco was interesting, as he spent the whole time in disheveled office suit, complete with glasses and a briefcase, but often with a bottle in hand.

His beautiful voice conveyed a warm and tender heart, torn between caring for Fidelio/Leonore and fear for his boss. Koch sounded a little grainy that night, but his acting was as intense as ever. The rest of the cast sounded uniformly excellent, and they all were totally committed to the performance.

I had a little doubt about Petrenko, as I feared he might approach this as Wagner-lite. I couldn’t be farther than the truth! After a solemn introduction at the beginning of Leonore Overture No. 3, Petrenko kept approaching the score with lightness and agility.

In fact, in his hands, the score almost felt Mozartian! It didn’t mean that he skimped on the dynamics though; the climaxes sounded powerful as ever, particularly as the brass blaring out loud. In conclusion, thiswas a performance that I would forever cherish deep in my memory, a perfect ending for my trip!