Last night, for the first time in nearly a year and a half, opera returned to Lincoln Center. 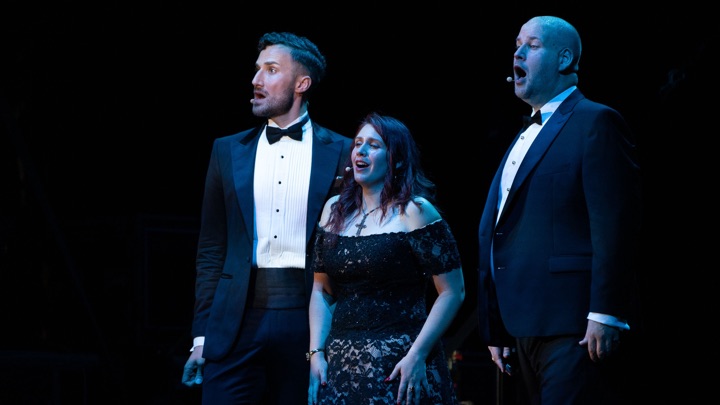 But it was not to the Met which no doubt loomed large—both literally and figuratively—in the minds of the audience, but to Damrosch Park located immediately to the left of the deserted opera house. Begun in 2018 to perform and promote neglected bel canto works, Teatro Nuovo perhaps understandably fell back to the tried-and-true for its 2021 season offering a warmly comforting concert performance of Rossini’s Il Barbiere di Siviglia—to be repeated tonight.

2020 was to have brought Rossini’s Maometto Secondo but that was not to be. However, three of the scheduled Maometto singers were invited back for the far less ambitious Barbiere. Perhaps somewhat compromised by its noisy outdoor venue, Tuesday evening lacked the ideal Rossini pizzazz, but the Damrosch Park Barbiere still managed to embody some of Teatro Nuovo’s valuable ambitions.

What struck me most about this Barbiere was its exfoliation of hoary conventions that have accrued over the years to this most popular of comic operas. Never have I heard a less obstreperous “Largo al factotum,” an aria routinely embraced by showboating baritones.

Bass (!) Hans Tashjian, presumably with the guidance of Crutchfield and the musical preparation of Lucy T. Yates and Timothy Cheung, actually stuck to the score (imagine!) and eschewed all those added whistles, hoots and high notes we’ve all become used to. It was delightful, but I wonder if some in the audience were dismayed by the Muti-esque come scritto absence of interpolated cadential high notes all evening. I for one found it refreshing.

The singers were encouraged to add ornamentation. This nobly intended return to early 19th century  conventions wasn’t always completely successful though; rather often the trills (many!) and roulades simply taxed the singers rather than allowing them to show off a bit. The exception was Hannah Ludwig’s lavishly decorated “Una voce poco fa” which made this very familiar aria sound brand-new.

The use of a period-instrument orchestra led by the first violinist rather than a conductor proved the revelation of Teatro Nuovo’s Gazza Ladra at SUNY Purchase two years ago. Unfortunately, the necessary amplification at Damrosch Park muddied the orchestral sound so that any nuances that might have come from the older instruments were lost. Fleeting moments during the overture hinted at what might have been and very occasionally pinging notes from the 1804 fortepiano played by Crutchfield would be heard above the mild Upper West Side ambient din that enveloped everyone.

The lovers proved oddly mismatched: not only did Nicholas Simpson’s Almaviva physically tower over Ludwig’s Rosina, his bright tenor, oozing squillo, was always splendidly audible while her covered, exceptionally dark near-contralto didn’t always penetrate especially in the Lesson Scene when her pallid “Contro un cor” was far from the intended show-stopper.

First violinist Jakub Lehmann’s leadership of the performance was most satisfying in the exuberant first-act finale; elsewhere, it seemed too sedate and careful to fully match Rossini’s infectious energy.

Exactly two months from last night, the Met reopens with the local premiere of Terence Blanchard’s Fire Shut in My Bones. In the meantime, hundreds of initially sweaty fans gratefully whooped and hollered as the Count and Figaro conspired to outsmart the dyspeptic Bartolo! It all felt like being home again!

(On a more personal note, it was especially great to meet Gabrielle, Dawn Fatale and La Cieca—the latter for the first time since 2019!—and share Barbiere.)