She’s a stranger here herself

The four leading roles in La Straniera were all attractively cast by Teatro Nuovo with fresh, promising young voices that did not seem quite ready for the big time. 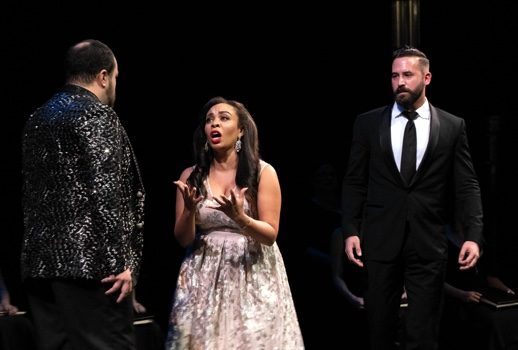 Bellini’s fourth opera, La Straniera, was a hit in 1829, all over Italy and then throughout Europe. Bellini’s highly original style of plangent, flowing melody was the newest thing in romantic atmosphere. Would he have been able to write a merry comic jaunt like L’Elisir d’amore or L’Italiana in Algeri? I doubt it. Nobody asked him to. They wanted mysterious Byronic epics and he was glad to oblige.

Since the driving force of this opera is the mad passion of the tenor, that was just as well, though some critics thought Rubini too languid for the role—they preferred the originator of the role, Domenico Reina, whose voice was lower but more intense. Today, when the piece is revived—as it was on Wednesday night at Rose Hall by Teatro Nuovo—many pleasures are to be had.

Will Crutchfield’s company teaches bel canto style to singers and the delicately-breathed way of accompanying these scores that was called for in Italy in the early ottocento. His band gave us a highly sympathetic version of the score, delicately orchestrated for the singers’ sakes as was Bellini’s wont.

They perform on original instruments—wooden flutes and clarinets, valveless brasses, a fortepiano at which Crutchfield sits, not for recitatives but to direct the various sections of the orchestra placed around him in a rather planetary manner, as was the custom in Bellini’s Italy. The ensemble and singers were then cued and directed by the enthusiastic concertmaster, Jakob Lehmann.

A familiar trope of the romantic era—but it’s far older than that—is the nameless hero who intrudes upon society, upending everything. Bellini, or rather his librettist Felice Romani, made use of it in Il Pirata, when his hero was an amorous exile come home. In Straniera, the pace changes a bit—the Mysterious Stranger in black with an unknown past is the prima donna not the hero (the locals think she’s a witch), but once again the tenor’s unruly passions drive the plot.

Recollecting Shaw’s dictum that Opera is about a soprano and a tenor who wish to be together and a baritone who tries to prevent this, tenor Arturo assaults the baritone who has advised him to leave mysterious Alaide alone, and hurls him, wounded, into a lake. Only then does Arturo learn that the fellow was the lady’s brother, Valdeburgo. Perhaps Arturo, chastened, will now marry his abandoned fiancée, Isoletta?

Poor girl, she sang about him in Act I and sings about him now. But Arturo is still fixated on the Stranger. Then the trumpets ring to announce Alaide’s true identity: She is the King of France’s banished bigamous wife. She returns to Paris and the throne. Arturo kills himself. La Straniera does not go mad, because Imogene already did that in Il Pirata.

Bellini was perfectly happy with Felice Romani’s libretto, which gave him literate, poetic verses to set. But when he’d written better operas with clearer stories, Straniera was forgotten. In modern times, it has been trotted out for Caballé, Scotto, Fleming and Gruberova, and after one or two performances, back in the trunk it goes.

Lovely and Bellinian as the tunes may be, nothing from Straniera has ever been popular with those who prepare excerpts, make recordings, enter contests. Il Pirata and Capuletti are second rank scores, but each provides an aria for soprano that has become a bel canto standard and that has kept us aware of the works from which they are drawn. Not Straniera. Much as the world would love there to be a fourth Bellini masterpiece, but three (Sonnambula, Norma, Puritani) is sufficient from a guy who died at 33.

The four leading roles, two sopranos, tenor and baritone, were all attractively cast by Teatro Nuovo with fresh, promising young voices that did not seem quite ready for the big time. Soon.

Christine Lyons, the evening’s Alaide, has a striking chesty soprano with an attractive smoky quality, which interferes with clarity of her declamation and ornament. Smoky is good; murky is a pond too far. The instrument is even up to a brilliant high C, and murmurs sensuously, but her words were as fuzzy as her tones. Bel canto may simply not be her proper repertory, but she made attractive sounds in the proper mournful manner.

In contrast—and since they are both sopranos and in love with the same tenor, contrast was a good thing—Alina Tamborini sang Isoletta with a clear, attractive line and a genuine trill, though it was a sizable voice and no canary. I wouldn’t be surprised to encounter a Sonnambula in her future.

Derrek Stark has the mindless, ardent urgency for a bel canto tenor in love. It’s a sizable voice, easily produced and attractive, with some ping on top, but tends to fade into colorless mutter at the bottom of the range. His diction was exceptional—every word could be understood without the titles.

The favorite at this performance was the fraternal baritone, Valdeburgo, Steven LaBrie, who sang a sexy King Alfonso in La Favorita with New Amsterdam Opera last year. He has good instincts, line and color, and he already performs around the country, both traditional roles (Escamillo, Barbiere) and modern ones.

His cocky stage presence (which did not suit the self-effacing role he played) drew attention. His voice is masculine and consoling, potentially the full Donizetti-Verdi article (I’d love to hear him in Belisario), and I’d like to find out if he can fill a house from further back than the very edge of the stage.

The minor roles, darker men’s voices, were attractively handled, and the small chorus did an enthusiastic job.

I know nothing of the company’s aims or finances, but Teatro Nuovo—which also presented Rossini’s La Gazza Ladra this yearand gave both operas at Purchase before bringing them to the city—is an attractive diversion and a chance to hear young, skilled singers prepare roles with an orchestra of the size for which bel canto composers wrote. That will not be their destiny if they make the big time, as some of them surely will, so one welcomes the opportunity to hear them now.