There is no spoon

Can a work with indisputably great music fail to add up to a successful opera? I puzzled over that Sunday during Teatro Nuovo’s essential concert staging of Rossini’s La Gazza Ladra at SUNY Purchase. 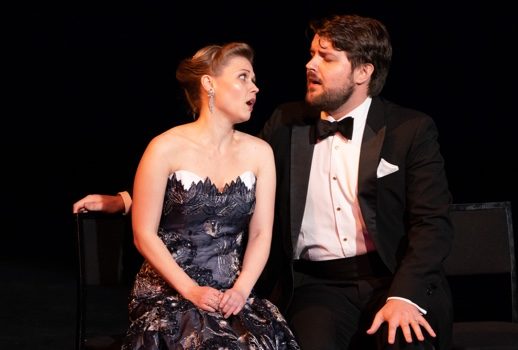 Can a work with pages and pages of indisputably great music fail to add up to a successful opera? I puzzled over that Sunday during the four hours of Teatro Nuovo’s essential concert staging of Rossini’s La Gazza Ladra at SUNY Purchase. Luckily this perplexing yet enthralling semiseria will be repeated in Manhattan on Thursday at the Rose Theater and no one interested in bel canto should miss it.

The opera premiered at La Scala in 1817 in the midst of a remarkably fecund time even for the prolific Rossini. In just under two years, he produced—in addition to Gazza Ladra—Il Barbiere di Siviglia, Otello, La Cenerentola and Armida!

While initially very popular, “The Thieving Magpie” has since mostly dropped out of sight despite an occasional revival—Bronx Opera in 2013 and at the Glimmerglass Festival three years ago; most recently there was a return to La Scala conducted by Riccardo Chailly and starring Rosa Feola as its colossally unlucky heroine Ninetta.

I was improbably introduced to Gazza Ladra via an X-rated movie! When Stanley Kubrick’s film adaptation of Anthony Burgess’s horrifying dystopian novel A Clockwork Orange was released in 1971, I was too young to see it, but it fascinated me nonetheless so I bought the paperback and the soundtrack LP which I knew featured a lot of classical music.

When I eventually saw the movie, I discovered that Rossini’s overture is the first “old” music one hears after Wendy Carlos’s spooky Moog score under the titles; it ironically accompanies Alex and his droogs on several of their adventures in ultra-violence.

That brilliant overture, one of Rossini’s finest, might be part of the opera’s “problem.” Its irresistibly ebullient spirit prepares its audience for an effervescent comedy and for the first 45 minutes or so Gazza Ladra absolutely appears headed in that direction. Generically happy villagers joyously await the return of native son Giannetto to his beloved Ninetta, his family’s household servant.

However, without a moment’s pause, the story turns frighteningly dark when Ninetta’s father Fernando returns, a hunted man sentenced to death for a crime he didn’t commit. Then, immediately after a plan is hatched to facilitate his escape, Ninetta is accosted by the town’s slimy predatory mayor.

If Ninetta’s life isn’t complicated enough, she’s circumstantially implicated in the theft of a silver spoon, a crime which requires a ridiculously drastic penalty of death via a public execution! While it might be easy enough to accept this increasingly melodramatic plot, we all the while know that the cutlery-snatching culprit is actually the title character who was embodied here by tenor Christopher Hochstuhl as a cape-twirling swishy avian queen!

That farcical twist so undermines one’s sympathies—particularly right after a frightening chorus about the righteousness of meting out justice, one of Rossini’s most powerful passages—that the ornithological deus ex machina and happy ending become downright laughable. The radical tone shifts throughout make for a rocky ride from which the opera never quite recovers.

It’s too bad the libretto undermines a work filled to overflowing (at well over three hours) with astonishingly inventive music, especially the magnificent ensembles as its arias tend to be somewhat perfunctory particularly the heroine’s entrance with “Di piacer mi balza il cor.” However her poignant duets with both her father and her lover more than make up for Ninetta’s ho-hum first impression.

Ordinarily one would have made the summer pilgrimage to Katonah to experience this rare example of early 19th century Italian opera where under the meticulous guidance of Will Crutchfield “Bel Canto at Caramoor” flourished. But two years ago the Caramoor Festival inexplicably ended its interest in producing opera (which dated back at least to an extraordinary Semele with Beverly Sills fifty years ago).

In 2018 however the displaced Crutchfield launched Teatro Nuovo at SUNY Purchase. I missed last year’s Mayr and Rossini, but eagerly headed up to the bleak Westchester campus Sunday to see and hear for myself what this reimagined venture was all about.

A huge flood of nostalgia washed over me as the bus rolled toward the imposing cement-block Performing Arts Center where I camped out every summer from ’85 to ’89 to attend the PepsiCo Summerfare. It was an astonishingly wide-ranging festival perhaps best remembered for giving the world Peter Sellars’s life-changing productions of Handel’s Giulio Cesare and the three Mozart-da Ponte operas, including his eerily prescient Trump Tower Figaro.

This year’s Teatro Nuovo presentations featured rather than Met stars a bevy of young talented performers, but most fascinating to me was its orchestra performing on period instruments, either originals or copies. Doing 17th and 18th century opera accompanied by original-instrument bands has become almost commonplace these days, but it remains a novelty for later works.

In the late 1970s a wonderful series of Rossini recordings appeared with the Capella Coloniensis conducted by Gabriele Ferro. La Cenerentola and L’Italiana in Algeri featured Lucia Valentini-Terrani and were widely available. However, a Tancredi with Fiorenza Cossotto and Lella Cuberli was always nearly impossible to find—there’s currently a CD version on Amazon available for $90!

It’s not an altogether successful rendition but this duet by the two ladies may give an intriguing taste of Rossini with an HIP flavor.

More recently one shouldn’t forget Cecilia Bartoli’s first encounter with Isabella in Italiana which was accompanied by one of her preferred original-instrument groups, Ensemble Matheus.

The makeup of Teatro Nuovo’s orchestra wasn’t its only “innovation.” Rather than a single maestro conducting the group standing at a podium, there were two leaders, Jakob Lehmann (primo violino e capo d’orchestra) and longtime Crutchfield colleague Rachelle Jonck (maestro al cembalo.) Lehmann, along with a row of violinists, was seated—he on a piano bench—with his back to the audience while Jonck cued both the singers and the rest of the orchestra while seated at the fortepiano in the midst of the musicians.

Given the complex nature of a Rossini ensemble this might have been a recipe for disaster but everything hung together beautifully even at some extremely fleet tempi. While occasionally the natural horns and older woodwinds went awry, their biting—or mellow—timbres brought a bracing freshness to Rossini’s fiercely imaginative orchestral writing. The brashly exhilarating overture alone would have made the long afternoon worthwhile.

Happily the large well-prepared cast proved nearly always equal to the composer’s demanding vocal writing. In the not-too-distant past florid passages for male singers in Rossini operas would be simplified or huffed-and-puffed through. This occurs far less often these days as demonstrated by Gazza Ladra’s cast which not only handled the coloratura with some dexterity but also stylishly ornamented the repeats.

Oliver Sewell brought a sweetly ringing tenor to the ineffectual Giannetto and his splendid high notes emerged as a true extension of his voice rather than the piercing squawks one sometimes hears.

Bass-baritone Eric van Heyningen’s immensely sympathetic Fernando exuded winning pathos in his wrenching duet with Ninetta and especially in the tense trio that follows in which he parries with the manipulative Podestà, initially sung by agile bass Hans Tashjian, who towered over everyone.

Tashjian started strongly as the sleaze but grew increasingly fainter as the act progressed so it wasn’t a surprise when Crutchfield stepped out at the beginning of the second act to announce that Tashjian had succumbed to a virus and Vincent Grana would be taking over. If a bit less tall but bearded like most everyone else, Grana proceeded with commendable confidence and nearly made one believe in his despicable character’s eventual remorse.

The performance’s most arresting voice belonged to Hannah Ludwig in the trouser role of Pippo, Ninetta’s gayish BFF. Her big, bold mezzo made one sit up and take notice that here was a special artist. Unfortunately Pippo doesn’t get an aria nor any especially interesting music beyond an enchanting prison-scene duet with Ninetta, ravishingly sung by Ludwig and Alisa Jordheim.

I wouldn’t be surprised if Pippo points the way to an important career for Ludwig in the way it did 60 years ago when Janet Baker performed it at the Wexford Festival.

Ninetta is a devilishly long and demanding role and Jordheim’s cool high soprano handled it with gratifying stamina and aplomb. Difficult ornaments and ascents to acuti held no terrors for her but overall her portrayal of the beleaguered girl was disappointingly bland. Joy and despair pretty much came across in the same way and although strikingly attractive she didn’t convey much of the fascination that accounts for Ninetta’s irresistible allure.

Though ideally one wanted more verve and panache overall, the passionate commitment of the assembled forces and the constantly delightful miracle of Rossini’s score made Teatro Nuovo’s Gazza Ladra one of the most nourishing bel canto experiences of recent years and did a lot to wash away acrid memories of the Met’s recent botch of Semiramide.