Simone Mayr’s Medea in Corinto, a curious work of 1813, has been revived by Will Crutchfield’s new enterprise, Teatro Nuovo. 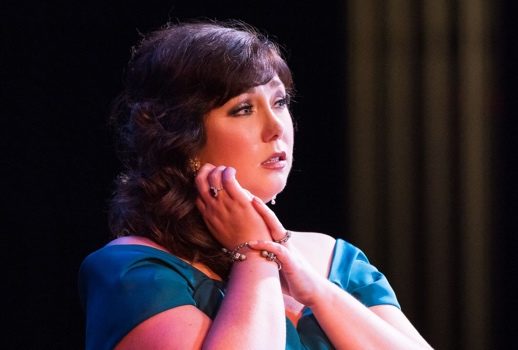 Jennifer Rowley in “Medea in Corinto”.

Simone Mayr’s Medea in Corinto, a curious work of 1813, far more popular than Cherubini’s piece during the the 19th century and last given in New York by Newell Jenkins’ Clarion Consort back in 1969, has been revived by Will Crutchfield’s new enterprise, Teatro Nuovo, for two performances—last Sunday and this Saturday—in tandem with another hit of 1813, Rossini’s Tancredi.

Of the half dozen operas I’ve seen about H.R.H. Princess Medea of Colchis and (en deuxième noces) Queen of Athens, Cavalli’s Giasone dealt with the hero’s many amorous shenanigans, Handel’s Teseo covered Medea’s unsuccessful attempt to trick her husband, King Aegeus, into poisoning his son, Theseus, Charpentier’s Medée depicted her as a satanic sorceress, Cherubini’s Medea (in Italian translation) portrayed single-minded vengeance, and Reimann’s Medea ended with her walking freely off to Delphi, contemptuously dismissing the maddened Jason.

Mayr pays full attention to Jason’s perfidy and Medea’s necromancy, the kids are killed offstage, and at the conclusion she waltzes off with King Aegeus who, in this version, had been jilted by Creusa for Jason. But Mayr’s centerpiece is a lengthy multi-part duet for Medea and Giasone in which they thrash through their relationship, just the sort of emotionally multiplex scene for which the bel canto and grand opera composers would become notable.

Mayr was a significant and popular figure in the era succeeding Gluck and Mozart when no one was sure what was going to become of Italian opera. In Italy itself (though they also worked elsewhere), Paisiello, Traetta, Cimarosa and Zingarelli were big names.

Mayr was born in Bavaria, though to Italian parents, but he settled when young in Bergamo, where he got a church job and founded a school, employments that did not distract him from composing dozens of operas for theaters all over the peninsula. Even Napoleon, who had rather conservative artistic tastes (dictators do, you know), tried to lure him to Paris.

From Medea in Corinto, one gathers that Mayr studied Gluck’s heroic declamation, while his orchestration owes a good deal to Mozart and Haydn. The age was one in which the advances in orchestral subtlety, varying accompaniment to mood, that we associate with Mozart were beginning to penetrate the southern world.

In Naples, at the Teatro San Carlo (which commissioned Mayr’s Medea), the largest and grandest theater in Italy, the tradition was to applaud vocal ability, surrounding it with unintrusive instrumental accompaniment. But that tradition was dying.

Mayr and Rossini were among the composers who introduced elaborate instrumentation to Italy, and were denounced as “Germans” for doing so. But the tide from Germany proved irresistible. Another change was the elaboration of plot in concerted movements, duets and trios or several duets at once, another Gluck-Mozart development that flowered in the hands of Rossini and his successors—notably Mayr’s top pupil, Gaetano Donizetti.

In Medea in Corinto, we may glimpse the direction Italian opera (and, via Rossini, Meyerbeer and Donizetti, French opera) was going to take in the next half century.

The Teatro Nuovo Orchestra, which uses a great many original (or copies of original) instruments, including an early harp and a serpent (!), was much larger and grander for Mayr’s opera than for Rossini’s Tancredi the previous evening, and the chorus, all male soldiery for Tancredi, this time included women.

The overture displayed a tossing around of instrumental figures from one virtuoso to another that one associates with the Rossini overtures of the following decade. Evidently, original and brilliant as Rossini was, he built upon foundations laid by others, Mayr among them. The orchestra was led from the keyboard by Jonathan Brandani, accompanied by a co-director violinist, Jakob Lehmann.

The libretto is an early effort by Felice Romani, who would become, for the next thirty years or so, Italy’s foremost practitioner of that art. Romani was originally a classics professor, author of an encyclopedia of mythology, and the flaw in that background is that he did not always keep his pedantry in check. (Look who’s talking.)

He appears so determined to give Creusa and Egeo things to do (perhaps he was following Corneille’s drama) that he did not always hold arias to the limit of their dramatic point. In contrast, Cherubini’s librettist, not so determined to develop lesser characters (Aegeus does not appear at all), produced a tighter, more focused opera.

For example, in Romani and Mayr’s determination to end Act I on a proper climax with everyone on stage and singing at once, Egeo is obliged to break into Giasone’s wedding to carry off Creusa while everyone deplores the disaster. There is nowhere to go with this.

When Act II commences, Creusa is back home, ready to start the wedding march again. (Did Wagner know this opera when he composed Lohengrin? Ponder.) We seem to be just marking time for Medea to start the vengeance machine going full throttle. When it comes, Mayr (like Cherubini) seems to be channeling Gluck, which is not a bad thing for frenzied mythos.

Jennifer Rowley, who turns up on many stages these days, has a beautiful, well supported soprano, deep and broad as anyone could wish, but a certain dullness of timbre—was it also flatness?—crept into a great deal of her singing in Act I. Only at the top of her range (Medea is not a lofty role, and she seems high only because so much of it lies low) was the full beauty of the instrument revealed.

Her duet with Giasone (tenor Derrek Stark)was effectively balanced and forceful, and her invocation of the dark powers in Act II stately and dire. She nails a curse to the wall, and she’s beautiful when she’s angry—happily, Medea is angry much of the time.

Stark, wearing a gold lamé jacket (tailored, no doubt, from the celebrated Fleece), sang tirelessly, with impressive fervor, through the long confrontational duet, and was as ardent to his fiancée as one could desire.

It is important that Creusa sing with as much contrast to Medea as possible, and Teresa Castillo’s delicate soprano achieved this effect. She was pleasingly ornamental in the long, rather pointless scene that opens Act II.

King Creonte, her father, was ably performed by baritone William Lee Bryan, and tenor Christopher Bozeka did a great deal of running around as the king’s confidante, or fixer. Mezzo Elena Snow, as Medea’s confidante, wrung her hands (vocally) with distinction.

King Aegeus (Egeo in this version) has a role even more pointless than Creusa’s, but in Naples they loved their tenors, even back in 1813. (In the premiere, Nozzari, Manuel Garcia and Donzelli, three of the greatest tenors in Italian opera, sang Giasone, Egeo and Giasone’s confidante, Tideo.) Egeo sings an aria in each act, first deploring the loss of Creusa, then resolving to support Medea’s vengeance.

At Purchase, this purely vocal role was performed by Mingjie Lei, whom I last heard as Iopas in the LOC Troyens. He gave, on vocal grounds, the most enjoyable performance of the day. His voice is honeyed, even, subtle in its signal of emotional pangs, delectable in its ornaments, sure in phrasing and a happy contrast to the sturdier sound Stark brought to Giasone. They were two rival, exemplary ways of appearing manly. I wouldn’t want to cut a note that either of them had to sing.