Beatrice Page is a wonderful fit for Ginger Rogers, who plays it with brassy charm and a laudable sense of humor, since the character seems not to notice that she has aged out of her 20s by a couple of decades. 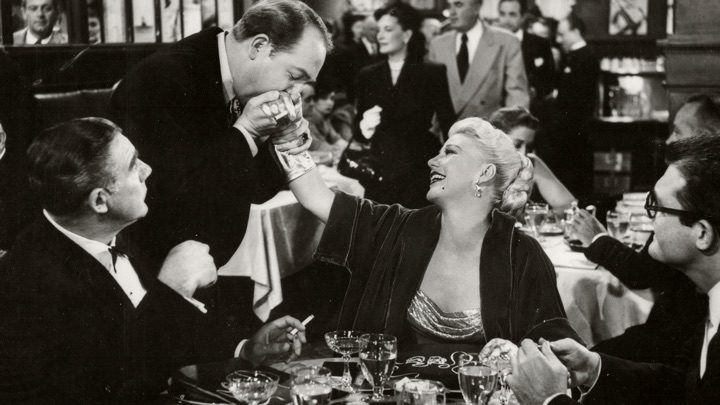 Cameron Kelsall: Listen to how a novice playwright critiques the performance of a superstar actress near the beginning of Forever Female, another in the long line of movies about life in the theater that came around in the late ‘40s and early ‘50s: “Half the time I thought you were charming. The other half you were so sure you were charming it gave me kind of a queasy feeling in my stomach.” That could serve as a review of the film itself, which is ostensibly a star vehicle for Ginger Rogers, seen here at her most radiant and glamorous. It hooked me right away in its detailed depiction of New York’s golden age, replete with martinis sipped at the Stork Club and opening night parties at Sardi’s.

David Fox: It took less than a minute for me to get a lump in my throat in Forever Female: when the inevitable opening shot of Time Square crossfades into a view of the Broadhurst Theatre marquee, then home to the musical Seventeen, which was running in 1951, when this movie was made. (Fun theater family fact: Seventeen featured Ann Crowley, the sister of Pat Crowley, who plays the ingénue role here.) We also glimpse marquees for the Music Box (Affairs of State with June Havoc) and the Booth (the long-forgotten Lace on Her Petticoat). Ah, the Broadway of yesteryear!

Cameron Kelsall: That charm, though, occasionally dips into archness, with a script that’s a little too sure of its wit when it’s actually somewhat obvious and dry. We should begin with the positive, though, and there’s a fair amount of it—perhaps nowhere more evident than in the performance of its sparkling star. Rogers, unlike Beatrice Page, the character she plays, is never anything less than genuinely delightful.

David Fox: I agree wholeheartedly that Beatrice Page is a wonderful fit for Rogers, who plays it with brassy charm and a laudable sense of humor, since the character seems not to notice that she has aged out of her 20s by a couple of decades. Forever Female also adds two great titles to my canon of fake plays for Broadway! No Laughing Matter and The Unhappy Holiday, which are the two Page vehicles that anchor the story.

CK: The latter is written by Stanley Krown, the insouciant playwright mentioned above, played by William Holden with a nice mixture of suavity and gruffness. In addition to being a love letter to Broadway, Forever Female functions as a predictable but enjoyable love triangle—or perhaps it’s actually a love square. Stanley and Beatrice swoon for each other, but Crowley’s ingenue—who changes her name every few scenes, a gag that runs a hair too long—is hot on Beatrice’s heels for both a part in the play and the man who wrote it. And Beatrice never really shakes off her producer, played by Paul Douglas, who is also conveniently her ex-husband. It goes without saying that nuptial hilarity ensues.

DF: We should also point out that Douglas’s character provides sly narration, though that drops off as the movie goes on. By now, all these elements together will certainly evoke the elephant in the screening room—All About Eve, which was made the previous year. We are clearly in similar territory, and often exhilaratingly so. But there’s a significant difference. Where Eve treats the theater with an almost holy sense of awe, there’s a breezy vulgarity running through Forever Female, that—depending on your mood—can be either bracing or off-putting. For me, it’s mostly the former. I greatly enjoyed that No Laughing Matter gets less-than-stellar reviews, and Page is meant to be “personality actress,” some notches below Eve’s Margo Channing, who is an amalgam of Katharine Cornell, Helen Hayes, and… well, Bette Davis.

CK: Yes—and unlike Roz Russell in The Velvet Touch, we don’t have to suffer through a comedienne trying her hand at Hedda to prove her bona fides. Rogers’ Beatrice Page knows exactly what kind of actress she is, and she revels in it. So, too, does Rogers herself.

DF: Rogers is superb at suggesting both the charm and gaucheness of the character… and by the way, she looks exactly like an emeritus Miss Adelaide, which reinforces the very Runyonesque sense of Broadway we get here. You can entertain yourself in Forever Female by figuring out how many people in the cast could go right into Guys and Dolls. I counted at least three Nathan Detroits. “The second act fell right on its sitzfleisch”—a line given to Jesse White in a delightful supporting turn as a press agent—encapsulates some of the coarse fun. 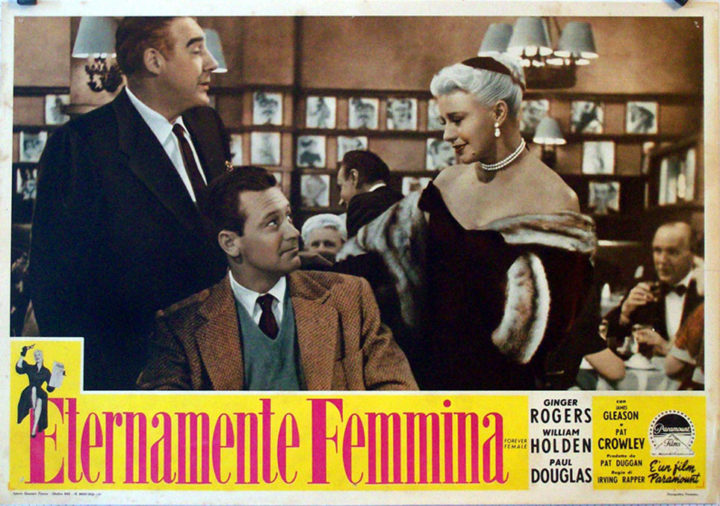 CK: Certainly Rogers, Douglas, Holden and Crowley could be dropped into the four leads of Guys and Dolls effortlessly. I do want to talk about Crowley’s performance—which won her the now sadly defunct Golden Globe for Best New Star. Crowley eventually turned into something of a personality actress herself, but there’s a certain slyness to her acting here that really worked for me. She suggests the hungry brashness of a conniving aspiring actress in the early scenes, and she’s not afraid to push her characterization right to the line of being annoying and tiresome. But she also conveys the humanity of her character at the end, showing that she truly does love Stanley—and that she really is the right girl for his show. More so than Rogers, who is at her least convincing in the one scene that requires her to push for emotional depth, Crowley really nails the feeling beneath the facade.

DF: Seeing Crowley’s name was another throat-lump moment for me. More than a decade after Forever Female, she would win enduring fame (from me, at least) as the mother and Jean Kerr doppelganger in the sitcom version of Please Don’t Eat the Daisies. I was around 10 years old at the time, and I adored the show and adored Crowley especially. Seeing her here so young was very touching… and also a bit disorienting. I agree that she’s radiant near the end, but I find her very arch and hoydenish (a word I never thought I’d write, but there you are) in the early scenes. I think a lot of it isn’t her fault, but lies in the screenplay by Julius J. and Philip Epstein (based on a play I don’t know at all—Rosalind, by J. M. Barrie), which wants the character to be many different and logically incompatible things. One minute, she’s scheming; the next endearing; the next, pushy and gauche.  I’m not sure anyone could make it work, and I think it’s one of the areas where Forever Female loses momentum.

CK: I do agree that the extended burlesque of her character is where the film goes off the rails, but to me, Crowley does more than enough to make up for it with her performance. Yes, hoydenish is an entirely appropriate word at some moments, but that affect is not necessarily out of place here. The film also loses steam long before it ends, largely because the denouement is so predictable—Beatrice Page, holding onto her last ember of youth, cedes both the part and the man to the next bright young thing. And…she takes the role of the mother! Time is a cruel mistress after all. It’s worth noting that after the film proper ends, a portrait of Pat Crowley is displayed, along with the text “Future Paramount Star.” I found this charming. It’s a reminder, not unlike the film itself, of how things were in this era.

DF: Literally, from my notes: “A sentimental and implausibly selfless ending sadly drains the movie of some of its energetic fun.” As for Crowley, I too noted the final frame, which struck me as oddly ironic. Her career certainly didn’t play out that way. She had some decent secondary roles in films, but her enduring fame would come in television. In that sense, she’s more like Miss Caswell than Eve Harrington. But of course, there’s nothing wrong with that—and if Forever Female is not a second All About Eve, at its best, it’s a delicious treat in its own way.