Despite the diminishing returns of her vocal means, Edita Gruberova's last years of her career were if anything more successful than ever. 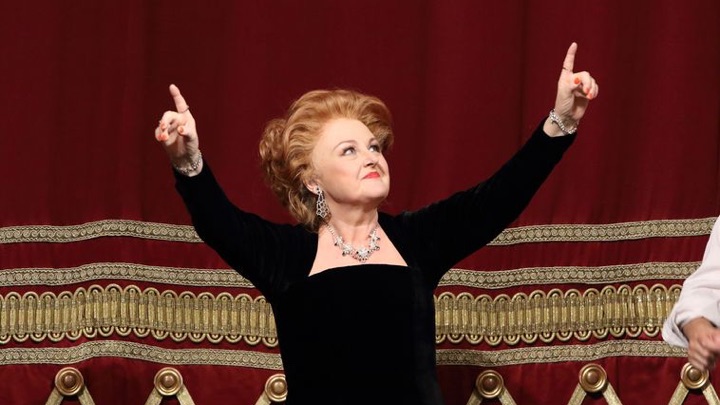 As promised previously, let’s continue our informal survey of  coloratura and/or bel canto sopranos, with a segue to the close of the career of Edita Gruberova.

Mariella Devia: I love her.

Absolutely solid musically, technically, with faultless intonation.  Incredible longevity. I find her rather generic, though, aloof, removed from committed emotional engagement (see Scotto entry below). But; in terms of her in the traditional sense, one of the very best of the Italian coloraturas, actually far eclipsing many of her earlier predecessors from decades previous in vocal security, precision, and stylistic taste. No other soprano in her native Italy sang Rossini as well as she, and a serious omission that much of her work wasn’t formally documented.

Leyla Gencer: Not a fan!

I was surprised to find her making some lovely sounds early on in her career as Lucia, but I find her Elisabetta in Roberto Devereux simply awful. Slovenly coloratura, gulpy glottal attacks, huge register chasms, hoisting the voice up and around, and caterwauling all over the place. Maddeningly uneven all throughout the career, I find her undisciplined, sloppy, campy, and uneven, despite some sterling work here and there.

When I first heard her, I thought her singing spectacular – fluent, with a dazzling upper register. I was ready and eager to be a big fan. But over time, that impression declined – that slow, languid attack in a melody (resulting in a weird vibrato), the white, blanching of her vowels, the slack rhythm sense – her idea of injecting “sensitivity” is to let things droop. No real trill, an inert, wan stage presence (which is odd, since she was a notorious firebrand off the stage).

On the basis of that early impression, I acquired practically every recording she put out – Maometto Secondo, La fille du regiment, her recitals, a few videos (her Semiramide is static and tepid) – all left, collectively, a fitful, ponderous impression. Something sterile, detached; correct, efficient, flashes of brilliance, but not absorbingly compelling. No defining role except perhaps Lucia.

I’ve studied Peters, Geszty, Deutekom, Gasdia, Aliberti, Nicolesco, Serra, Orgonasova, Dragoni, Swenson, Dessay, Damrau, Pratt, among others – whose work I’ve variously enjoyed or didn’t, depending on the role or the time in their respective careers. But they all contributed greatly to my understanding the art of florid song. Of the very light coloraturas, Ingeborg Hallstein and Beverly Hoch, with their fluent techniques, otherworldly upper registers and sterling musicianship, are spectacular.

I love Ruth Welting. Ditto Laura Aikin, whose Lulu was a watershed experience. Yvonne Kenny, Lella Cuberli, Elena Mosuc and Klara Kolonits I adore, and find them criminally underrated. I’m discovering some sterling work and performances by Miricioiu, as well as recently, that of Devieilhe, Oropesa, Morley, and Rebeka. Always, always looking and listening.

Two that I hold very high, especially as of the last several years: Renata Scotto and Gianna Rolandi.

Renata Scotto: I learned to love her.

I’d say the clinching moment with Scotto came on video several years ago with seeing her 1960s Lucia di Lammermoor in Japan. I’d caught much of her on TV in the later part of her career when the voice was in decline, so I was not enamored of her at the time. But that Lucia performance was a revelation. Bel canto mastery with an absolutely arresting stage presence, and making Lucia human, burning with passion.

It was after seeing Scotto in this that my impression of Devia, in her 1991 La scala video of Lucia significantly diminished: the former is just riveting, while the latter, while efficient, musicianly, seemed merely polite (Devia, for all her excellence, hasn’t one role where she is considered definitive, non-pareil).  But Scotto at her best, the one quality she shares with Edita is the forward, resonant vocal/vowel production, which gives a dynamism to the articulation of the text, and clarity to the tonal texture, which I find appropriate.

That is why they both sounded better live. There are a good deal of live performances with Scotto in bel canto, and I find her work in her best years of top-caliber artistry, and, uniquely, completely authentic in the disposition of her voice, and by her birthright.

June Anderson complained that Beverly Sills at New York City Opera gave her few opportunities, and the plums went to Rolandi and Ashley Putnam instead.  Based on the scant live performances, audio and video, it’s easy to hear and see why Sills opted for Rolandi. She could act, the voice was expressive, characterful, lively, and her musicianship was exceptional; the technique was formidable, with sensational coloratura and ornamenting abilities.

And: Rolandi was a superb comedienne.  See her Lucia clips on YouTube for her acting, and her dazzling comedic turn in La cenerentola.  The mark of a great stage performer is the ability at both tragedy and comedy, and Rolandi excelled in both capacities.

That is what characterized Edita.

She was adept in equal measure at tragedy and comedy. She had it all. Technique of the highest order. Ideal diction and pronunciation. Recitatives infused with meaning, slow melodies shaped, contoured, cabalettas brilliant, vibrant, made meaningful. Most of her coloratura work of non-pareil, hallmark excellence.

High notes of power, and never aspirated – and often on actual words, not just that meaningless, detached “ha-HAH.” No words dropped in her florid work, a feature almost exclusive to her. Puntature very rarely employed. Unparalleled audience rapport. Star quality. Charisma.  And yes, that singular, individual style of hers. I remember a few disgruntled vocal “axperts” telling me that Edita should listen to this or that coloratura, ostensibly to hear it done the “right” way. My response? “She should sound like your conditioned comfort zones?”

Critical points? Absolutely.  She could over-control the vocal deployment, with the result of occasional, squeezed “hairpinning” of a tone. Portamenti could be too broad or drawn-out; many object to this and call it “scooping.” Her belief in the legato transition from note to note without the aspirate could be protracted and sometimes slippery. Occasional flatness.

It was a voice best heard live. Recordings narrowed the impact, could make it sound small and hard,  In the house, the voice just expanded in that cone-like effect and blossomed out with incredible overtones and vibrancy. Many think she had weak low notes. It was a high-set voice, where its glory was.

When Edita’s voice began declining in her mid-late 60s, it upset me far less than it did others. With the bulk of her career behind and all the decades of excellence preceding her, I accepted the inevitable rather serenely. There was all that nonsense about her tarnishing the memory of her previous years, but that is said of practically every singer who were said to have “gone on too long.” But all the legends of the past are celebrated as vociferously if they were still here.

As the years went on I spoke to Edita less frequently.  In late 2006, she experienced her first vocal crisis and began to restudy her technique with Gudrun Ayasse.  In 2007 Edita and her life partner Friedrich Haider went their separate ways, but still collaborating professionally (he remained her top preference as conductor in bel canto roles).

I had the strong sense that Edita needed to withdraw and not wanting to communicate as much as previously.  When we did make contact via the occasional letter or through a mutual acquaintance, the respect and warmth remained undimmed, her words sweet, sincere, and of that long-established familiarity.

Despite the diminishing returns of her vocal means, Edita’s last two years of her career were if anything more successful than ever: rapturously received 50th anniversary and farewell concerts that made international headlines, and her first tour of China, where she, nearing her mid-70s, was received with rock-star adulation.

After her very last appearance in a recital at the end of 2019, the pandemic prevented her from fulfilling a final contractual obligation in 2020 as Elisabetta in Roberto Devereux, in Košice, Slovakia. Edita had a wish to cap her career where she had started, in her homeland.  It was then that she made the decision to retire from all performing.

When she left her career, it was without any sentimentality – “That’s it, I’m finished.”