"Camp" is exactly the lens through which The Velvet Touch is best examined, including an utterly bewildering cross-pollinating of genres. 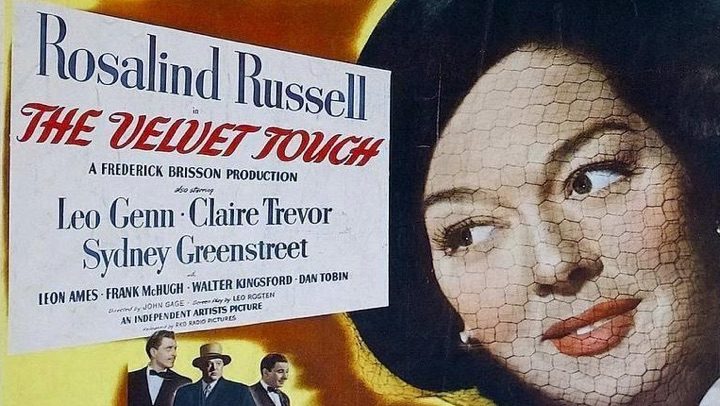 David Fox: It stands to reason that All About Eve would not be unique in tackling backstage theatrical intrigue and leading ladies at a crossroads. But till our esteemed editor James Jorden suggested looking at films with a similar theme, I’d never really thought about it, and The Velvet Touch was a movie I’d never heard of, let alone seen. I’m so delighted to discover it now! TVT had me at hello, with its titles over a glamorous caricature of Rosalind Russell waving a cigarette holder, and one of those unseen movie choruses singing a romantic title song. Next, we get shots of Manhattan at night and theater marquees—notably one for Valerie Stanton (Roz, of course) in Escapade. We will later see posters for other Valerie Stanton vehicles, including Scandalous and It’s a Gay Life. (Sidebar: A peculiar fetish of mine is plays made up for movies. OK, they don’t exist. I get that. But still, could Lloyd Richards’ Footsteps on the Ceiling be any worse than Oleanna, or Thom Pain (based on nothing), or The Sound Inside? I’m willing to bet the answer is no.)

Cameron Kelsall: The Velvet Touch actually predates All About Eve by two years, but in terms of quality, it is certainly a poor relation in this particular family of melodramas. Let’s get something out of the way up front—this isn’t a very good film, even by potboiler standards. The first scene establishes the stakes, or should, when Valerie bludgeons her controlling lover, Gordon Dunning (Leon Ames), who also happens to be her producer, in a fit of passion.

DF: “E avanti a lui tremava tutta Sardi’s!” Well, it does have what Margo Channing would label “those Belasco touches.”

CK: The rest of the movie revolves around whether guilt will lead her to confess her crime or not—particularly after her co-star, Marian Webster (Claire Trevor), takes the fall, then bumps herself off, leaving Valerie off the hook. But the screenplay is nowhere near taut or introspective enough to support this level of psychological drama, even for just ninety minutes. And Russell is certainly not on Bette Davis’ level in terms of nuanced, lived-in acting. That said, I had a fabulous time watching it—I felt transported back to my younger days, when little excited me more than discovering a juicy B-movie on TCM.

DF: When we wrote on All About Eve, Cameron, you pointed out that ,although it is an iconic film in the gay community, it wouldn’t be properly categorized as camp, at least not in the lighthearted, dismissive sense. Yet “camp” is exactly the lens through which TVT is best examined, including an utterly bewildering cross-pollinating of genres. At the outset, all signs point to a frothy comedy about the theater. But what’s this? The lights go out on the marquee, the music turns ominous, and suddenly we’re in for a big genre shift. Roz, dressed to the nines with a fabulous sparkly hat, is engaged in a tough-talk argument with Ames. The dialogue is pure kitsch: “I’ve begun to feel that life can be very good and simple,” says Roz, looking dreamily off into some distance. “Success and money, that’s what runs the world,” sneers Ames. There’s a vague threat of blackmail, and bingo: Roz bonks Ames with a “Players Award” statuette (fake theater awards are another fetish of mine). Suddenly we’re in a different movie entirely—melodrama crossed with film noir. The genre-fuck nature of TVT has Russell channeling, alternately, Geraldine Fitzgerald in Three Strangers, Auntie Mame, and Hedda Gabler. Sadly, only one of these is a good fit.

CK: The noirish subplot also introduces Sydney Greenstreet as a corpulent gumshoe who, believe it or not, is besotted with theater himself—it sometimes feels as if the Kander & Ebb musical Curtains was stripped of its tongue-in-cheek humor and treated as a serious whodunnit. There’s also the love story involving Roz and Leo Genn, playing a mysterious British gentleman, that never fully comes together. The entire endeavor seems like someone in a studio office dropped a pile of scripts and, in attempting to pick the pages up off the floor, just threw everything together. Again—the proceedings are best enjoyed with little regard for what’s actually happening onscreen.

DF: I think to Greenstreet’s great credit (and he’s fabulous here, as always) he seems to float above it all, even giving winking hints that he’s in on the joke, as he goes delightedly from hard-boiled detective one moment to Anna Pavlova fanboy the next. There are several other terrific supporting performances, including especially the great Claire Trevor. And of course, this being a theater movie, there is a supercilious bitchy queen lurking in the sidelines, played with insouciant ease by Dan Tobin.

CK: Trevor really is superb here—astringent one moment, pitiable the next, playing a character who always seems to come out on the losing side of things. She won the Oscar the same year TVT came out for her performance in Key Largo, and that year also made three other films, all supporting parts. The brilliance of her performance here really drives home something we’ve lost in movies as the studio system has faded: Although we sometimes still speak of “character actors,” the real distinction between stars and support has largely faded. Trevor is as textbook a supporting actress as you can be, and she steals every scene she’s in.

DF: Amen to all that. Honestly, she’s the number one takeaway from TVT—and if she had played Valerie, the whole thing would have made a hell of a lot more sense, and maybe been a genuinely good B-movie. But alas, this leads us to the real problem here: Russell herself. I’m in awe of her skills as a brittle, motor-mouthed comedienne, which have given us some of the greatest movie performances in history. But Roz without irony just doesn’t work. You’d think losing the Academy Award for Mourning Becomes Electra would have taught her a lesson, but apparently not. Here she’s chewing the scenery with so much gusto that I’m surprised the theater district is still standing.

CK: Valerie Stanton is a boulevard comedienne who wants to be a serious actress—the murder hinges around her desire to headline a production of Hedda Gabler—and that desire leads to her downfall. The same is true for Roz herself, sadly.

DF: You took the words right out of my mouth. My main takeaway from TVT is that—probably without the writers’ intention—Valerie Stanton’s career serves as a perfect metaphor for Russell’s own. As a sophisticated comedienne, she was brilliant; but her Hedda Gabler deserves jail time.

CK: Still better, though, than Mary-Louise Parker or Kelly McGillis in recent years.

DF: Yes—as with the fake plays that “appear” in movies, some fake performances are better than ones that actually happened. My second big takeaway is more positive, and that’s the astonishing degree to which a couple of scenes in particular—especially the brief, “madcap” excerpt we see from Escapade—almost spookily presage the style of Auntie Mame, which eight years later would, of course, rightly become Roz’s beloved signature.

CK: I’m sure someday we’ll discuss Auntie Mame, which remains one of the most sparkling and enjoyable comedies ever put on film. But in keeping with our current theme, we’re heading to Forever Female next—even though Ginger Rogers, like Russell and Trevor, was a Republican ghoul.

DF: Forever Female is another new one for me. Meanwhile—vote ’em out of office.