Youth comes to the fore

“That girl’s a character!” “I think she’s got something!” 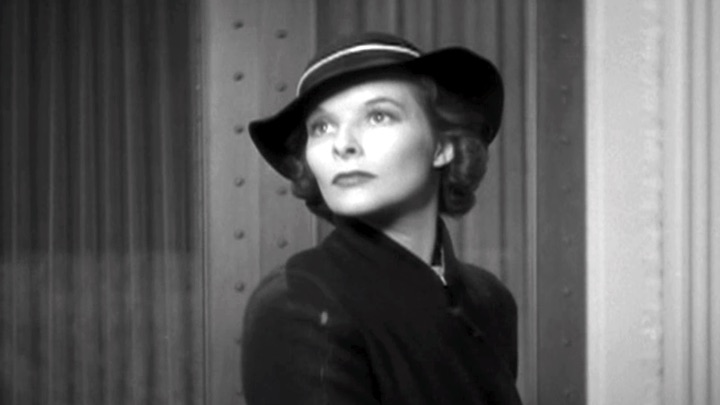 David Fox:  This exchange between a Broadway producer (Adolphe Menjou) and a besotted playwright (Douglas Fairbanks Jr.) comes from the 1933 movie Morning Glory, and concerns a young actress who has christened herself with the stage name of “Eva Lovelace.” She is played by Katharine Hepburn, in what was only her third film, and would win her the first of four Academy Awards. It might as easily be about Hepburn herself, who is already so utterly distinctive and brashly confident a presence as to divide public opinion. (She’s also at her most visually arresting—those cheekbones, when we first glimpse her pale face under a brimmed cloche hat!) Watching this movie, she even divided mine—sometimes I find her absolutely captivating, making something real of a flighty and very strangely written character. At other times, I think she misfires, and I would not say that fey or innocent sincerity are qualities naturally in her wheelhouse. But whatever KH is or isn’t—she’s riveting… and I sort of fell in love with Morning Glory, a preposterous piece of theatrical kitsch. (I was a goner the instant a conversation comes up about Katharine Cornell starring in a new Ferenc Molnar play at the Lyceum.)

Cameron Kelsall: We are jumping all over the place in our survey of Hepburn’s screen performances, but in a way, I’m glad to come back to this very early endeavor after getting a sense of what came later. In a way, the positive and negative traits I’ve come to associate with her style are already on display, even at the age of 26. As Eva Lovelace—who, we sense, might be more gifted at selling herself than she is possessed of any actual talent—Hepburn is cocksure and funny one moment, vulnerable and moving the next. She is also self-indulgent—and, to use a word often applied to Hepburn, in ways that may or may not be complimentary, very iconoclastic. The film itself is an amusing trifle, but her performance, even with some ham-fisted moments, lifts it to another level.

DF: Cameron, your comment about whether or not we’re to understand Eva Lovelace as brilliantly gifted or mostly driven really resonates with questions I kept asking as I watched Morning Glory. The movie is based on what was at that point an unproduced play by a quite celebrated writer, Zoë Akins, and in some ways it follows a pretty conventional theme: the wondrous, aspiring actress, embarking on a career. But Morning Glory is weirdly poised between arch comedy and bathos, and often I couldn’t figure out what we’re meant to make of Lovelace. Consider her first few minutes on the screen. Perpetually chattering to anyone who will listen, she’s logorrheic, pretentious, self-invented: “Mistah Easton is cahsting his new play… Eva Lovelace is my stage name… I’ve acted evah since I was a child. I’m from Franklin, Vehmont, to go into the loathsome details. (Later, eyeing another actress wearing a stole.) I don’t like anything cheap, pahticulahly fuhs.” Yet as the film progresses, I think we’re supposed to see her as truly extraordinary… but also scarily driven and nearly delusional. What gives? 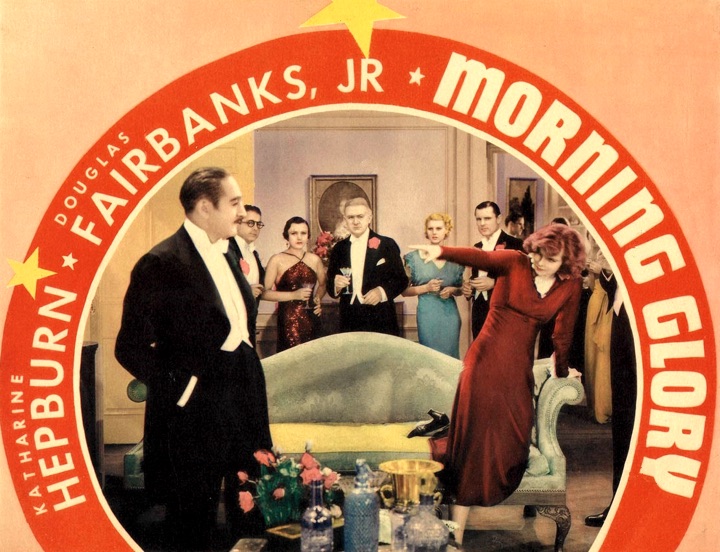 CK: It’s a paradox—are we meant to see her as extraordinary, or do we see that because Hepburn herself is extraordinary? I’m still not sure. But I think the story takes on a much more intriguing dimension if Eva is actually steely and determined rather than preternaturally gifted.

DF: I agree that that is the more interesting (and less obvious) choice. But then I wonder what we are meant to make of Eva’s semi-drunken performance at a party where she sobers up enough to deliver a large portion of Hamlet’s “To be or not to be” speech, followed by the famous passage of Juliet on the balcony? For the record, I think KH is a surprisingly effective Hamlet, but a pretty unlikely Juliet (far less effective than Katharine Cornell in her tiny fragment of the speech in Stage Door Canteen, a precious and virtually singular souvenir of this great actress). Again, it’s perplexing.

CK: I agree, but that entire sequence won me over in its unrepentant theatricality. The film packs a lot of story into a short reel—it only runs 73 minutes—and, spoiler alert, Eva’s star doesn’t truly ascend until the final moments, when she becomes an overnight success as an understudy.

DF: But we also learn the limits of that success. Another spoiler alert: the movie isn’t called Morning Glory because it’s about flowers.

CK: Before then, Howard J. Green’s script suggests that Eva experiences homelessness, sexual harassment and a string of bad gigs because she refuses to cheapen her art. Shouldn’t she seem a little self-deluded… to say nothing of self-destructive?

DF: Your point about Eva’s dire circumstances underscores that Morning Glory comes out of the darkest days of the depression, a fact that’s acknowledged here—several characters say what a tough season it is on Broadway—but mostly sublimated to Eva’s personal story. While watching it, I kept thinking of Gold Diggers of 1933, which came out the same year and deals with a similar milieu (again, putting on a show), but with far more directness. In that context, there’s something especially off-putting about Eva’s self-created grandness, and the bubble in which she exists. I actually found myself routing for rival actresses in the film, played by Geneva Mitchell and Mary Duncan. Both characters are gauche and vulgar and fun and genuine. Duncan, who deserves to be better-known, is especially delicious in what would prove to be the final role of her six-year film career. (Note: her post-retirement life was a doozy!)

CK: Mitchell and Duncan are delicious indeed—Mitchell herself had a somewhat checkered life and career too, and was the lover of director Lowell Sherman, who died shortly after Morning Glory was released. In terms of memorable supporting performances, we should call out two others, on the opposite end of the camp spectrum. C. Aubrey Smith is wonderfully warm and dignified as an older actor who takes a fatherly shine to Hepburn’s Eva, and in just a few short minutes, Helen Ware nearly steals the picture as Nellie Navarre—a wardrobe mistress who, we learn, was once an overnight star herself.

DF: How has “Nellie Navarre”—the name and the persona—not become a Parterre sobriquet??

CK: Going forward, I might take it as my own!

DF: But while we’re on the subject of Hepburn’s supporting cast, let’s again note Adolphe Menjou, giving the performance he could have patented as a Broadway producer; and Douglas Fairbanks Jr., who to me looked almost unrecognizably boyish and “aw-shucks appealing as the writer who is unrequitedly devoted to Eva. As for Don Alvaro in the tiny walk-on role of Pepi Velez, I can only say, “be still, mi corazón!”

CK: We could split any number of hairs, but at the end of the day, Morning Glory is a must for theater lovers and nostalgics alike. As I find myself missing live performance more and more each day, it was comforting to watch this unabashedly showbiz tale, where life seems to begin at half-hour and you can practically smell the greasepaint through the screen. If you forgot to start that Disney+ subscription this weekend, might I suggest Hepburn if you don’t have Hamilton?