What Ever Happened to Baby Jane is, of course, the founding document behind the concept—itself almost a piece of Grand Guignol theatrics—of horror as the genre to which female stars are left once they've hit 50. 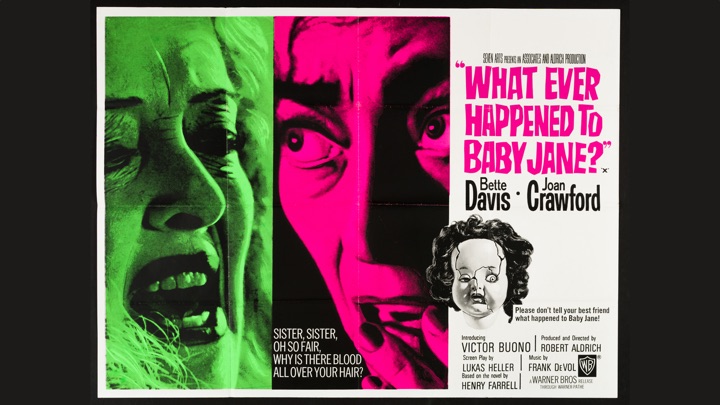 David Fox: With What Ever Happened to Baby Jane?—which is surely among my top ten favorite movies ever, and my admiration only grows with the years—I will out myself. Not as a gay man (I think that’s a given), but for my small personal connection. My father, Michael Fox (without the J.) has a very brief appearance in it; at 15:40, he’s the announcer seen on the TV, advertising “Iliad, the classic dog food.” He did a similar gig in two other Robert Aldrich movies: The Longest Yard, and (crossing myself and spitting three times) The Legend of Lylah Clare. I think of this as my little toe-hold on camp immortality. And certainly, Baby Jane the film has indisputably attained that status, further confirmed and launched for a whole new generation through Ryan Murphy’s television series, Feud. But to view the movie as camp is in some sense shortchanging it. I think it’s an absolutely brilliant film by any measure, and that belief is a hill I’m willing to die on.

Cameron Kelsall: Although Hush…Hush, Sweet Charlotte contains more than a few interesting performances and some particular, peculiar insights—as we discussed last week—the balance largely lands in the camp column. But I agree that Baby Jane (as we’ll call it for brevity’s sake) is much smarter, and more sly, in nearly every respect. It’s interesting that both films are almost exactly the same length, two hours and 13 minutes, yet Baby Jane almost never drags, whereas Charlotte could easily lose up to an hour without any depreciation. The film keeps the viewer engaged, enraged, enthralled, embarrassed and titillated at every turn. A good deal of that is due to the stars—Bette Davis, our current idée fixe, and Joan Crawford, who needs no introduction—who translated their chilly personal relationship into one of the most captivating and terrifying sibling dynamics ever put on screen. But the movie itself excels in so many areas that I hope we can consider, from performance to aesthetics, and on its strength alone, I would rank Aldrich as an unjustly overlooked auteurist. 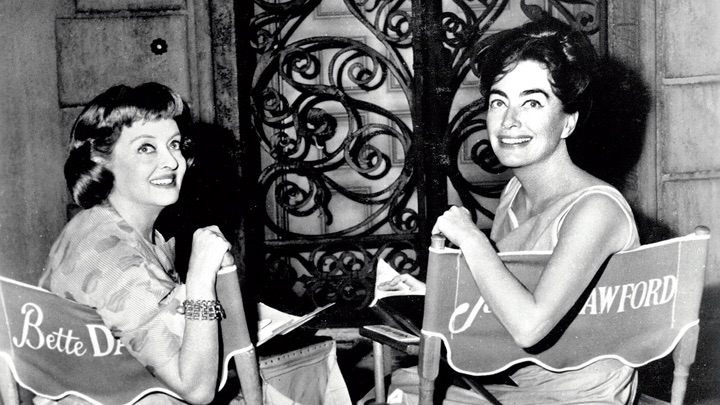 David Fox: There are so many places to start here, but honoring the camp history and Murphy’s TV focus, let’s begin with its stars. Baby Jane is, of course, the founding document behind the concept—itself almost a piece of Grand Guignol theatrics—of horror as the genre to which female stars are left once they’ve hit 50. If that’s the case, Davis and Crawford not only accepted this fate here, but they seem to celebrate it with a sense of zeal and almost joyful abandon that is especially impressive given what we know of their personal animosity. In the whole of American film, I can’t think of a performance more energetic and committed than Davis’s Jane, literally every frame of which almost bursts with emotional intensity. Around 53 here, she looks 20 years older, and seems to revel in it—while at the same time, making Jane a figure worthy of sympathy—and even more amazingly, possessing great wit and charm. It’s truly astonishing work.

CK: As we dig deeper into the Davis oeuvre, I am continually impressed by her level of commitment and, given the reputation that has been applied to her post-mortem, her general good taste. Every gay man and/or drag queen can crow the immortal “But’cha are, Blanche!” line or imitate Baby Jane’s shrieking cackle, but those elements are only little dashes of a performance that is surprisingly vulnerable and richly detailed. And her relatively emotional work plays nicely against Crawford’s rather staid, serious performance. Whereas Davis allows herself to be fully seen in all of Baby Jane’s physical grotesquerie—impressive when you consider she made the film right after originating the sexpot role of Maxine in Night of the Iguana—Crawford’s neatly preserved appearance makes a strong contrast. Even when Blanche Hudson is at her most vulnerable, she appears attractive and collected; even when Baby Jane is at her most abusive and unhinged, she never sinks to full monstrosity. 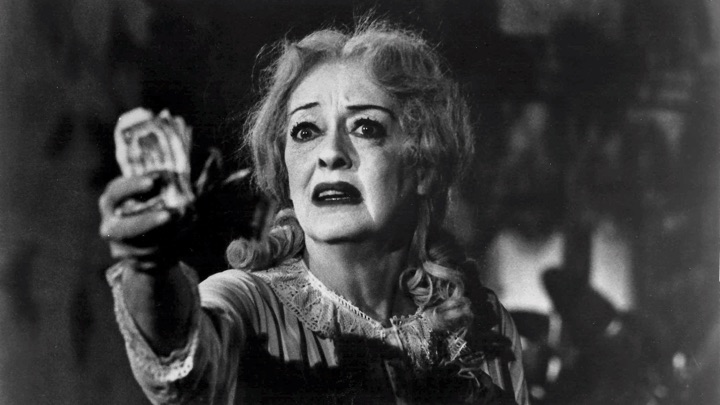 DF: Jane is clearly the showstopper role, and of course Davis’s is the performance that was nominated for an Oscar, which generates one of the sharpest and bitchiest episodes in Feud. But if it’s easy to underestimate Crawford here, it would be a big mistake. As you say, she is as contained and, in an odd way, elegant, as Davis is baroque. Crawford’s face—which evolved over her film career from stunningly feminine beauty to an almost sculptural androgynous handsomeness—is always intensely expressive, and she’s smart enough to know when that’s enough. Watching the two together, I thought rather strangely of another fabulous movie pairing from just a couple of years later: Elizabeth Taylor and Richard Burton in Who’s Afraid of Virginia Woolf?. Individually, these are superb performances, but together something even more electric happens. Taylor and Burton were, of course, married; while Davis and Crawford avoided each other as much as possible. But the chemistry is undeniable and priceless.

CK: Great as Davis and Crawford are here, they’re not the whole show. The picture brims with colorful supporting performances, and in some ways, you could look at Aldrich as a precursor to directors like Robert Altman or Paul Thomas Anderson who really put a lot of stock into building out the entire world of the film, and making sure even the smallest part is cast with someone unique and memorable. (It’s worth noting that Aldrich, like Altman or Anderson or even the aforementioned Ryan Murphy, tended to use the same actors in multiple projects.) Of course, the takeaway supporting performance here is Victor Buono’s Oscar-nominated turn as Edwin Flagg, the oily accompanist who stumbles into Baby Jane’s frenetic fantasia. But there are so many great little roles, like Maidie Norman as Blanche’s devoted servant, Elvira, or Anna Lee as Mrs. Bates, the busybody from next door. (And of course—Davis’ own offspring, B. D. Merrill, is a hoot as Mrs. Bates’ snippy teenage daughter.) 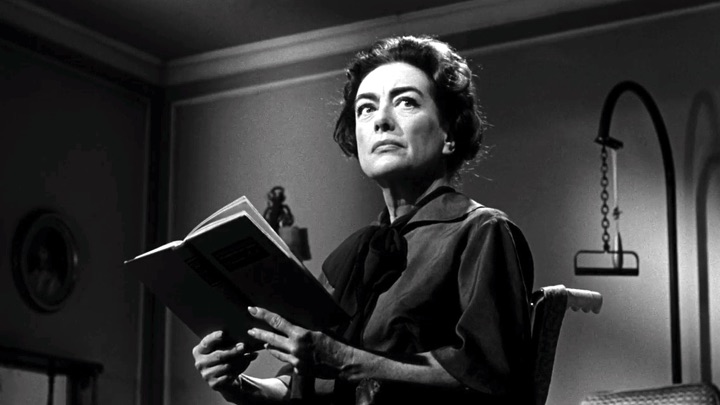 DF: Agreed on the specialness of all of these, and I also want to note the marvelously over-the-top turn by Australian actress Marjorie Bennett as Buono/Flagg’s suffocating mother. Buono, of course, also shows up in Charlotte, equally creepy and quite different. But I want to say a bit more about Maidie Norman, who was herself a very interesting figure—in her second career, a distinguished academic, who taught for years at UCLA (sadly, I missed her there by just a few years). It’s easy to see in Baby Jane that the black woman is, of course, cast as a domestic. But what Norman and Aldrich do is very much out of the box for this character. Elvira is impeccably turned out, self-possessed, and a pillar of respectability. I absolutely love the moment when she says about a note she discovered that Jane had written, that some of the swear words were so base she hadn’t heard them in years. Marvelous!

CK: The framing of Norman’s character and her relationship to Blanche is of a piece with what I think makes Aldrich such an interesting director. Like Nicholas Ray or Douglas Sirk, he’s working within the constraints of a genre, but also subverting expectations throughout. He’s also unafraid to move away from sheer horror into something more psychologically disturbing. I’m always left reeling by the strangeness of the final scene, as Baby Jane, about to be apprehended by the police for Elvira’s murder, loses herself in reverie, imagining the crowding onlookers as an adoring audience. Davis’s committed performance and Ernest Haller’s unsettling cinematography create such an unusual sense of unease. It feels almost experimental. 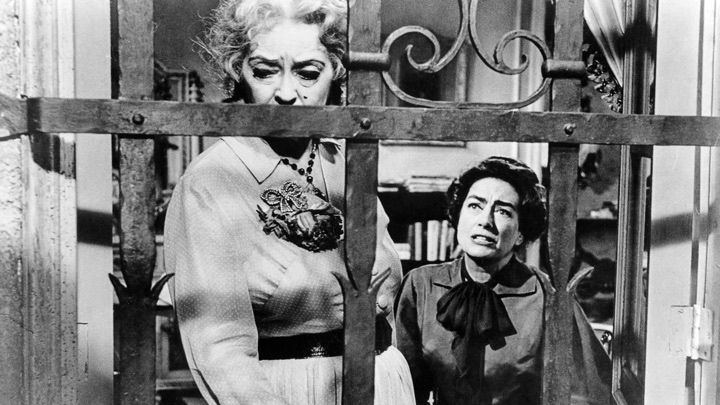 DF: I can see what you mean about experimentalism, while at the same time being fascinated in Baby Jane by what to me is a core theme with a long tradition—the essential cruelty and heartbreak of show business. The movie is usually classified as horror, or more thoughtfully, as a psychological thriller. But for me, it recalls other great works—on film, Sunset Boulevard, for sure; and in literature, Nathaniel West‘s harrowing The Day of the Locust—which, while they have some moments that can be read as camp, are also legitimately tragic. One of the things I’d fault Ryan Murphy for is failing to recognize the scale and thematic grandeur of Baby Jane.

CK: Feud, at least, had some snappy performances—I can never get enough Jackie Hoffman—and a generally high bitchiness quotient. A true lack of grandeur, however, is what you get in the woebegone television remake from the early ‘90s featuring real-life sisters Vanessa and Lynn Redgrave. It’s available to stream through Amazon Prime, and we said we’d try to watch it before writing. I only made it through about 45 minutes. You?

DF: I stuck it out for the full 90 minutes—maybe the longest hour and a half of my life. Woo boy. I suppose one could say of it that if anyone ever questions why Aldrich’s Baby Jane is such a beloved piece of work, this crass, clueless reboot will illustrate the difference, point for point. Surely, there was never a movie where a remake is more wrong-headed, but I will say the Redgrave version had one promising idea at its center, that in a way speaks to what I was talking about with movie mythology. Here, the world of Baby Jane is re-situated with Los Angeles’s fringe movie-lover culture. That should have been interesting, but instead it goes for virtually nothing. Both Redgraves are, of course, brilliantly gifted actors, but you sure wouldn’t know it from this. And the production values—despite this having been made by a major television studio—are unbelievably tawdry. A lot of it looks like bottom-shelf porn, minus the sex.

CK: All I can add is that while Davis and Crawford both give multifaceted performances, the Redgraves here indulge in what I think of as their worst qualities—Vanessa’s beatific saintliness and Lynn’s crass overindulgence. I’ve seen them both brilliant; I’ve never seen either worse.

DF: I wonder if anyone thought to ask Corin Redgrave to play the reworked and renamed Buono character? Instead, that’s played here by John Glover, who is creepy but not very interesting. Oh, well. So, I guess now we know what happened to poor Baby Jane. But Cameron, shall we agree to return when we get the next remake with Demi Lovato and Madison De La Garza?

CK: It’s only a matter of time, isn’t it? Till then, we’re going to take a brief detour away from Davis and into Crawford territory next week, with Johnny Guitar.