Another point of etiquette is that a gentleman must never leave the ladies of his own box alone. 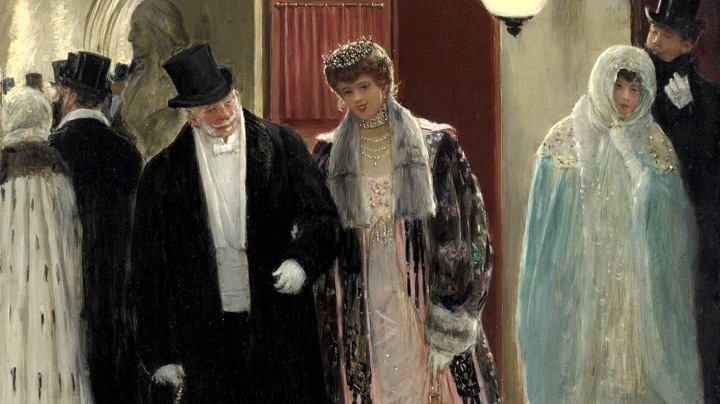 Following are Mrs. Post’s dicta regarding that fondly-recalled habit of attending the opera in person:

AT THE OPERA, THE THEATER, AND OTHER PUBLIC GATHERINGS

Excepting a religious ceremonial, there is no occasion where greater dignity of manner is required of ladies and gentlemen both, than in occupying a box at the opera. For a gentleman especially no other etiquette is so exacting.

In walking about in the foyer of the opera house, a gentleman leaves his coat in the box—or in his orchestra chair—but he always wears his high hat. The “collapsible” hat is for use in the seats rather than in the boxes, but it can be worn perfectly well by a guest in the latter if he hasn’t a “silk” one. A gentleman must always be in full dress, tail coat, white waistcoat, white tie and white gloves whether he is seated in the orchestra or a box. He wears white gloves nowhere else except at a ball, or when usher at a wedding.

As people usually dine with their hostess before the opera, they arrive together; the gentlemen assist the ladies to lay off their wraps, one of the gentlemen (whichever is nearest) draws back the curtain dividing the ante-room from the box, and the ladies enter, followed by the gentlemen, the last of whom closes the curtain again. If there are two ladies besides the hostess, the latter places her most distinguished or older guest in the corner nearest the stage. The seat furthest from the stage is always her own. The older guest takes her seat first, then the hostess takes her place, whereupon the third lady goes forward in the center to the front of the box, and stands until one of the gentlemen places a chair for her between the other two. (The chairs are arranged in three rows, of one on either side with an aisle left between.)

One of the duties of the gentlemen is to see that the curtains at the back of the box remain tightly closed, as the light from the ante-room shining in the faces of others in the audience across the house is very disagreeable to them.

A gentleman never sits in the front row of a box, even though he is for a time alone in it.

It is the custom for a gentleman who is a guest in one box to pay visits to friends in other boxes during the entr’actes. He must visit none but ladies of his acquaintance and must never enter a box in which he knows only the gentlemen, and expect to be introduced to the ladies. If Arthur Norman, for instance, wishes to present a gentleman to Mrs. Gilding in her box at the opera, he must first ask her if he may bring his friend James Dawson. (He would on no account speak of him as Mr. Dawson unless he is an elderly person.) A lady’s box at the opera is actually her house, and only those who are acceptable as visitors in her house should ask to be admitted.

But it is quite correct for a gentleman to go into a stranger’s box to speak to a lady who is a friend of his, just as he would go to see her if she were staying in a stranger’s house. But he should not go into the box of one he does not know, to speak to a lady with whom he has only a slight acquaintance, since visits are not paid quite so casually to ladies who are themselves visitors. Upon a gentleman’s entering a box it is obligatory for whoever is sitting behind the lady to whom the arriving gentleman’s visit is addressed, to relinquish his chair. Another point of etiquette is that a gentleman must never leave the ladies of his own box alone. Occasionally it happens that the gentlemen in Mrs. Gilding’s box, for instance, have all relinquished their places to visitors and have themselves gone to Mrs. Worldly’s or Mrs. Jones’ or Mrs. Town’s boxes. Mrs. Gilding’s guests must, from the vantage point of the Worldly, Jones or Town boxes, keep a watchful eye on their hostess and instantly return to her support when they see her visitors about to leave, even though the ladies whom they are momentarily visiting be left to themselves. It is of course the duty of the other gentlemen who came to the opera with Mrs. Worldly, Mrs. Jones or Mrs. Town to hurry to them.

A gentleman must never stay in any box that he does not belong in, after the lowering of the lights for the curtain. Nor, in spite of cartoons to the contrary, does good taste permit conversation during the performance or during the overture. Box holders arriving late or leaving before the final curtain do so as quietly as possible and always without speaking.

A “brilliant opera night,” which one often hears spoken of (meaning merely that all the boxes are occupied, and that the ladies are more elaborately dressed than usual) is generally a night when a leader of fashion such as Mrs. Worldly, Mrs. Gilding, or Mrs. Toplofty, is giving a ball; and most of the holders of the parterre boxes are in ball dresses, with an unusual display of jewels. Or a house will be particularly “brilliant” if a very great singer is appearing in a new role, or if a personage be present, as when Marshal Joffre went to the Metropolitan.

One gentleman, at least, must wait in the carriage lobby until all the ladies in his party have driven away. Never under any circumstances may “the last” gentleman leave a lady standing alone on the sidewalk. It is the duty of the hostess to take all unattended ladies home who have not a private conveyance of their own, but the obligation does not extend to married couples or odd men. But if a married lady or widow has ordered her own car to come for her, the odd gentleman waits with her until it appears. It is then considerate for her to offer him a “lift,” but it is equally proper for her to thank him for waiting and drive off alone.

It will not be tonight