Wagner must intrude at some point because he invented film music. 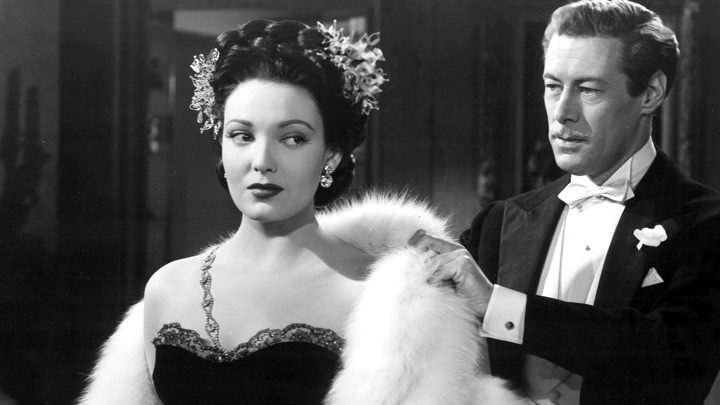 The use of opera in movies that most appeals to me is the use that accompanies or contrasts ironically, the use of opera as, well, a sort of Leitmotiv in the action.

Wagner must intrude at some point because he invented film music. Yes, although he did so two generations before there were any films to score. A professional conductor of other people’s operas (Fidelio and Freischütz and Norma were among his favorites), he grew annoyed by the break in mood when numbers were interrupted by recitative or dialogue, or even worse, a curtain, with sets to be changed, maybe even an intermission. It broke the dramatic tension.

In candlelit days, lights could not be dimmed, and performances took place with boxholders keeping an eye on other boxholders. Gas and electricity changed all that, but in anticipation, Wagner had invented “endless melody.” Once the theater went dark and the well-lit scene came up, you had one focus of the eye’s attention.

This extended musical fabric, twining sinuously in the background as themes arose and fell and harmonized, bringing matters into mind as the singers performed their dramatic tasks in front of us, was a new thing. So was playing music straight through scene changes (they took longer in those days—today you can just push a button). It was Wagner who invented scene-change music to give you a hint what was going on between stage action.

Contrast the “Siegfried goes through the Fire” music, five minutes of it, during the scene change of Act III of Siegfried with Trovatore, where poor Verdi has to have someone explain what has occurred during the intermission. (“We fought a duel. I won. And then, in battle, he had me hacked nearly to death!” “That’ll teach you.”) To be fair, Wagner also has characters explain what went on in the previous opera. They don’t trust us to read the synopsis, and they’re right.

Wagner’s atmospheric scene changes were of dubious use to filmmakers because he does wander a bit. They are set pieces. The prelude to Lohengrin was useful for Chaplin as a set piece. The “Ride of the Valkyries” defies easy summary, but in Apocalypse Now, it proved ideal for a maritime assault on jungle guerrillas.

The gracious, medieval faith expressed in the opening of Tannhäuser struck filmmaker Preston Sturges as “forgiving,” and he used it in both The Lady Eve and Unfaithfully Yours for husbands (Henry Fonda, Rex Harrison) pardoning errant wives (Barbara Stanwyck, Linda Darnell, respectively). It doesn’t work, of course—in Eve, Wagner segues into von Suppé for more confessions.

In Unfaithfully Yours, Harrison, a suspicious symphony conductor, imagines three ways of dealing with the problem—first, a far too elaborate murder accompanied by the overture to Rossini’s Semiramide (perfect choice!), then forgiveness and writing a check (to Tannhäuser), then (to Tchaikovsky “Francesca da Rimini”) a game of Russian Roulette. Of course, reality (with the same music) never quite lives up to fantasy, does it?

Probably the most popular Wagnerian selection—probably the most popular operatic selection for the movies since sound came in—is Tristan und Isolde, usually the Prelude or “Isoldes Verklärung,” but not always. The love themes of this fraught five-hour duet build to such shattering confrontations that it is easy to place the music in any spot of disastrous indecision.

In 1957’s Designing Woman, Lauren Bacall hears Tristan while making up her mind to give up her career for Gregory Peck. In 1946’s Dishonored Lady, Hedy Lamarr defies a sleazy lover who has put Tristan on the turntable, only to have someone else—but who?—sneak in to shoot him just at the moment of climax.

And it is while John Garfield, the man who can never love Joan Crawford as much as he loves his violin, is playing a transcription of the “Verklärung” on the radio in Humoresque, that the heroine tosses aside her umpteenth drink, throws open the French windows, and hurls herself into the crashing surf.

Europeans may not take Tristan as seriously as Hollywood does. In Visconti’s The Damned (1969), one of his family of corrupt industrialists is drunkenly singing the “Verklärung” on the Night of the Long Knives just before the gunmen show up—thus symbolizing the sewer into which German high culture has fallen.

Perhaps my favorite use of Tristan in movies occurs in Harold Prince’s Something for Everyone (1970). Michael York, the beautiful plotter, sneaks into the small town opera house and there, through opera glasses, observes exquisite Heidelinde Weis, his soon-to-be victim. Bored, she is playing with her opera glasses.

The scenes are intercut with the stage action, where a fat Isolde orders Brünnhilde into the wings and the music of expectation is played. Eventually the two beauties in the audience catch—and hold—each other’s eyes, just as the enormously fat Tristan barrels onto the stage, “Isolde!” “Tristan!” “Ah!” and they bounce off each other while attempting to embrace—and the music cuts off. And we observe the spider with the fly.

Lars von Trier’s Melancholia uses Tristan as well, but has the good taste to emphasize Tristan’s deathbed music from Act III, which is less popular (even unknown) in the movies and suits the dying planet of his story. Wagnerians will have extra clues to what to expect.

Next, we can delight in films that make use of a motif to give opera-lovers an extra little jiggle to appreciate what is going on.