My introduction to the work was the Angel LP from 1964 with Elisabeth Schwarzkopf and George Szell… and yes, I’m aware that it’s a performance that tends to divide rooms. 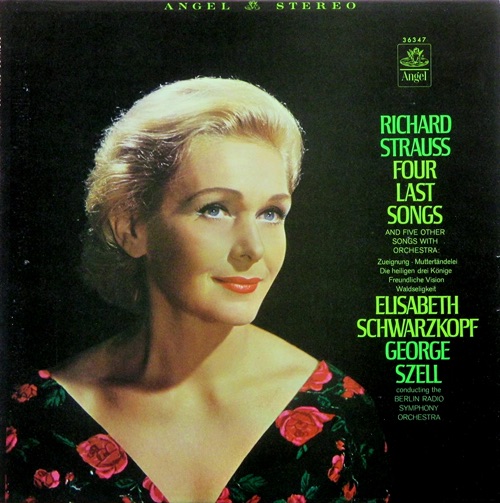 In our pandemic time, I’m becoming ever more aware that it helps to focus my entertainment on upbeat themes. Recently watching two Chekhov plays on video—Three Sisters, co-reviewed here with Cameron Kelsall, and The Cherry Orchard, which we’ll review together shortly—nearly gutted me. Yes, they resonated as never before… but really, did I need this much new insight?

Yet, I can’t seem to stay away. In thinking about the next installment of my life in records, two works that came to mind instantly were Mahler’s Rückert Lieder and Strauss’s Vier Letzte Lieder. Doom, meet gloom.

I’m choosing the Strauss, and not only because it does have, at least, a glorious burst of Spring before we progress into September and beyond. I also remember that, from my first hearing—around 1971 or ’72,  as I recall—I thought it was the most glorious musical outpouring I’d ever heard. Nearly a half-century later, that opinion still holds.

My introduction to the work was the Angel LP from 1964 with Elisabeth Schwarzkopf and George Szell… and yes, I’m aware that it’s a performance that tends to divide rooms. It was even then, though most of my friends, at least, considered it pretty much the Gold Standard.

More than that, it was virtually the only one easily findable at the time. A few others existed, for sure, but most were then out-of-print.

Younger listeners will think this astonishing, I imagine. Vier Letzte Lieder has become a recording staple for sopranos across a pretty wide range of fachs, from lyric to dramatic. Even then, new recordings of it began to appear more frequently.

Among that group, I recall greatly enjoying Kiri Te Kanawa for sheer beauty of tone, and being disappointed by Leontyne Price, whom I adored and still do. My feelings have shifted a lot over the years about Gundula Janowitz with Herbert von Karajan—in some moods, I think it’s ravishing and profound; in others, too automated.

But back to Schwarzkopf with Szell. I myself am divided about it. I get little pleasure from her “Frühling,” which—even transposed down, as it is—feels uncomfortably driven, vowels distorted, and with lots of noticeable vocal adjustments for age (the soprano was then 49, and her upper register had noticeably hardened).

Some of this is audible in the later songs, too. I can’t deny it. And yet, I still find the autumnal glow of her tone has a special radiance, and her way with the line and the text—particularly in “Beim Schlafengehen” and “Im Abendrot”—sublime. Szell’s conducting, too, sounds nearly ideal to me.

Later, I discovered that Schwarzkopf had actually recorded the cycle a decade earlier with Otto Ackermann. Of course, I sought it out… and yes: the singing is freer and easier. I admire the artistry here, too. But the whole performance doesn’t have the same heartfelt magic for me.

I’ve had many, many encounters with VLL since then. I especially treasure a live performance by Lucia Popp with Carlo Maria Giulini and the Los Angeles Philharmonic; also, among more recent recordings, Soile Isokoski and Marek Janowski. Actually, that recording was 2001, so not so recent—my own autumn is coming faster than I expected, apparently.

Both had glories of their own—and also, to my ear, some of Schwarzkopf’s depth of feeling.  But with all I’ve heard since, it’s still her recording that brings me back to the work and the spine-tingling thrill of hearing it for the first time.

OK, enough gloom for now. In my watching and listening life, no doubt there will be more tragedy tomorrow. But comedy tonight: I’m planning to watch Gidget Goes to Rome, a guilty pleasure from childhood! For another column, perhaps…